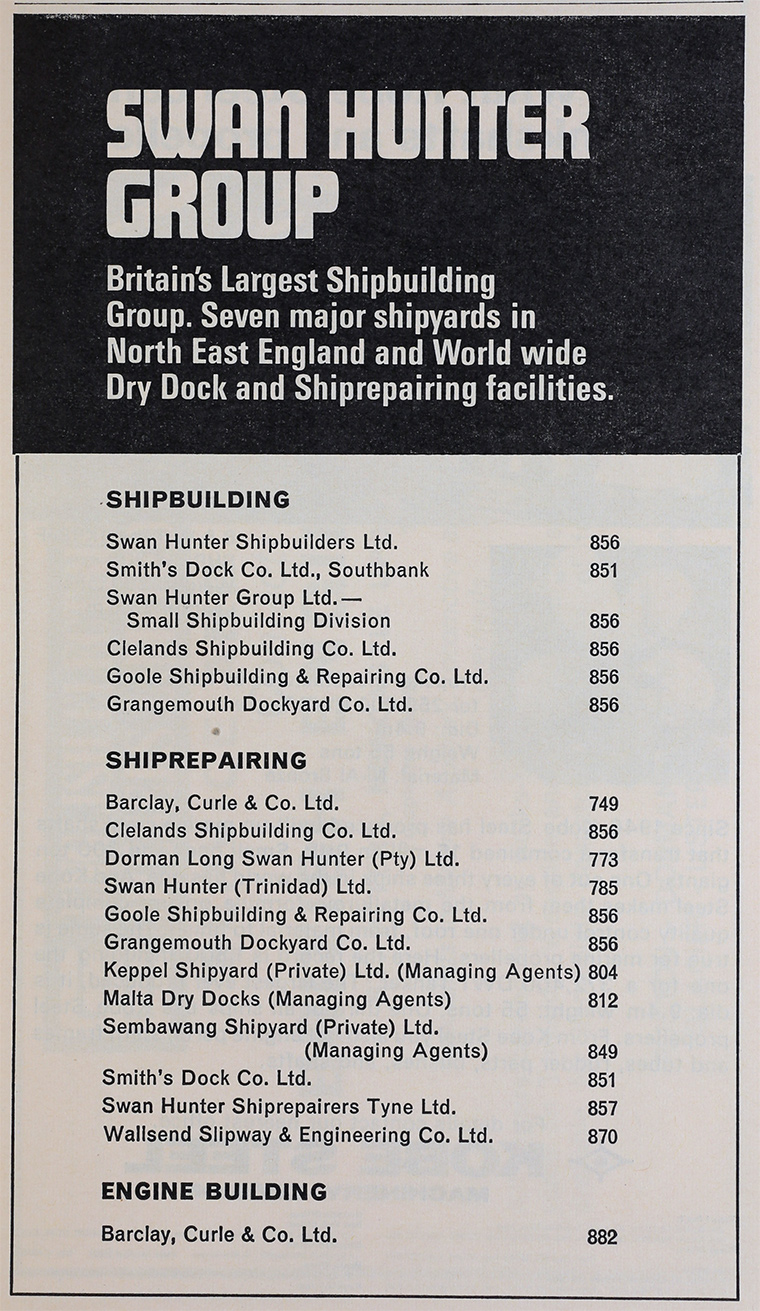 1967 The Geddes report recommended the rationalisation of Tyneside shipbuilding into a regional group. The five yards on the river: Wallsend, Neptune, Hawthorn Leslie, Walker Naval Yard (of Vickers-Armstrongs) and Readhead shipyards merged into Swan Hunter and Tyne Shipbuilders. This was effective from 1st January 1968.

1968 In October of this year the Furness Yard on the Tees joined this new consortium of yards and the name was changed once again to Swan Hunter Shipbuilders in early 1969. Also in this period the old berths 1 and 2 with gantry cranes were demolished and replaced with a single realigned berth angled across both of the old ones and capable of building VLCC tankers of 250,000 dwt and 1100 feet in length. Steel production was modernised and new craneage was installed. A large, modern joinery shop was also established to serve up all the yards in the Group. The dry-docks were also updated and operated separately from 1966 as Swan Hunter Repaiers

1971 The keel of the last passenger ship to be built on the Tyne was then laid at the Neptune Yard in 1971 launching as Vistafjord for the Norwegian America Line on 15th May 1972.

1977 On 1st July Swan Hunter Shipbuilders became part of the nationalised British Shipbuilders Corporation. There were 11,000 employees and the main berth at the Wallsend yard was building the hull of the aircraft carrier HMS Illustrious, which was launched on 1st December 1978. She participated in the Falklands War in 1982 after hurriedly being completed at the yard.

Forced to call in the receivers after the UK government awarded the contract for HMS Ocean to Vickers Shipbuilding and Engineering in Barrow in Furness for a cut-down price, which later turned out to be artificial. The final cost of the ship was more than £50 million in excess of Swan Hunter's quoted tender.

The shipyard was bought out of receivership by Jaap Kroese

2000 Swan Hunter was awarded the contract to design and build 2 ALSD ships for the Royal Navy with 2 other ships being built by BAE Systems Marine. The cost of the 2 Swan Hunter ships was to be £210 million including £62 million for lead yard services, by July 2006 (in-service date was 2004) the costs had risen to £309 million and only one ship had been delivered. As result of this the second ship RFA Lyme Bay was transferred to BAE Govan for completion.

1963-67 Two car ferries were completed for the U.K. coastal services of the Atlantic Steam Navigation Company Ltd (Gaelic Ferry 3316/63 and Europic Ferry 4190/67). Dover (3602/65) was completed for the Dover to Dunkirk route along with another ship which travelled from Harwich to the Hook of Holland for British Rail. Dover returned to the Tyne at the end of her career and is currently moored directly underneath the Tyne bridge in Gateshead as a leisure ship. A number of tramps were also manufactured, notably Riseley (6424/57) which was one of the first British tramps to have both bridge and engines aft. A further five tramps were also made for Greek owners between 1954-57

1963-1970 The County Class guided missile destroyers London (1963) and Norfolk (1970) were follow up vessels to Daring (1952) and these latter two ships both had Royal sponsors – the Duchess of Gloucester launched London on 7th December 1961 and the Duchess of Norfolk launched Norfolk on 16th November 1967.

1968 In April the first supertanker keel to be laid down on the new berth was that of Esso Northumbria and she was launched by Princess Anne on 2nd May 1969. The Esso ship left the river for trials watched by large crowds on 8th February 1970.

One of the first ships completed after the 1968 merger was the car and train ferry Vortigern (4371/69) for British Rail. In Summer she operated as a car ferry on the Dover to Boulogne route with space for 240 cars, while in Winter she operated as a train ferry on the Dover to Dunkirk route. A further order for four high-class cargo-liners for the Persian Gulf Services of British India was then started.

1971 The keel of the last passenger ship to be built on the Tyne was then laid at the Neptune Yard in 1971 launching as Vistafjord for the Norwegian America Line on 15th May 1972. Extensive use of aluminium for her superstructure was a feature, as was her designed twin role as a transatlantic liner and cruise ship. She left the Tyne in May 1973 for Oslo from where she departed for New York (her maiden voyage) on 22nd May 1973. She had room for 550 passengers and her twin propellers were powered by oil engines made at Wallsend by G. Clark & N.E.M. Ltd. She was later sold to Cunard Ltd for cruising.

The Neptune Yard then fitted out the hull of the Barrow-built liner Copenhagen whose Danish owner had gone bankrupt. She was completed as Odessa (13252/74) for the Russian Black Sea cruising fleet.

1972 The type 82 missile destroyer Bristol was launched on 30th June 1969 and was completed at the end of 1972 as the only one of its kind. Other naval ships completed in this period included frigates Falmouth (1961), Galatea (1963), oilers Tidereach (1954) and Oleander (1965) along with air stores ships Lyness, Stromness and Tarbartness (1966/67) The three air stores ships were later sold to the US Navy.

1980s The Houlder Brothers' diving support ship Orelia was launched on 11th December 1982 and completed in June 1984 for Houlder Offshore. She has a sophisticated computer-controlled dynamic positioning system to hold her steady above a well head using her six 6-cylinder Mirlees oil engines double-reduction geared to three shafts.

1984 The cable-layer and repair ship Pacific Guardian was launched on 13th June 1984 for the Pacific station at Suva, Fiji of Cable and Wireless Ltd.

1985 Three large merchant ships were completed at the Wallsend yard including the ro/ro (roll on/roll off) container ship Atlantic Conveyor (58438/85) for Cunard for transatlantic service in Atlantic Container transport and a replacement for a ship of the same name lost in the Falklands War.

2000 Swan Hunter was awarded the contract to design and build 2 ALSD ships for the Royal Navy with 2 other ships being built by BAE Systems Marine. The cost of the 2 Swan Hunter ships was to be £210 million including £62 million for lead yard services; by July 2006 (inservice date was 2004) the costs had risen too £309 million and only one ship had been delivered. As result of this the second ship RFA Lyme Bay was transferred to BAE Govan for completion.