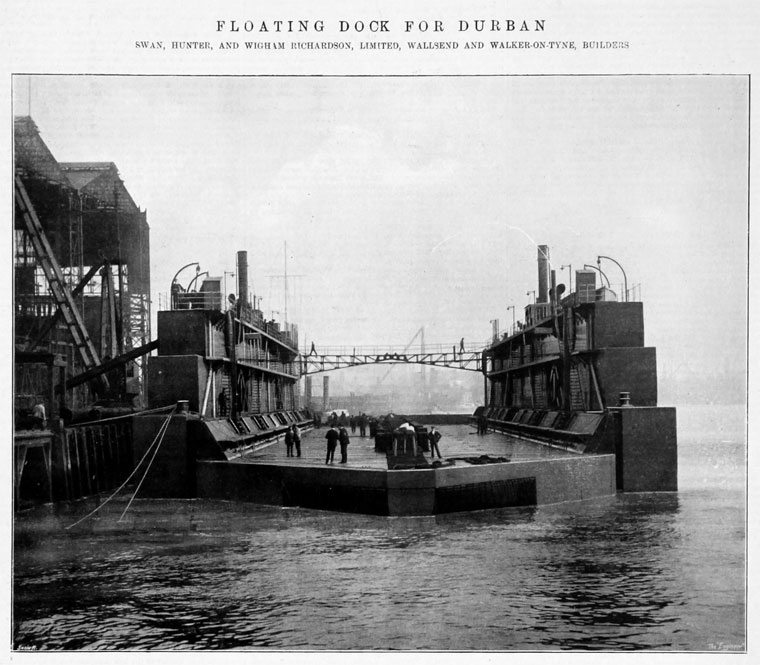 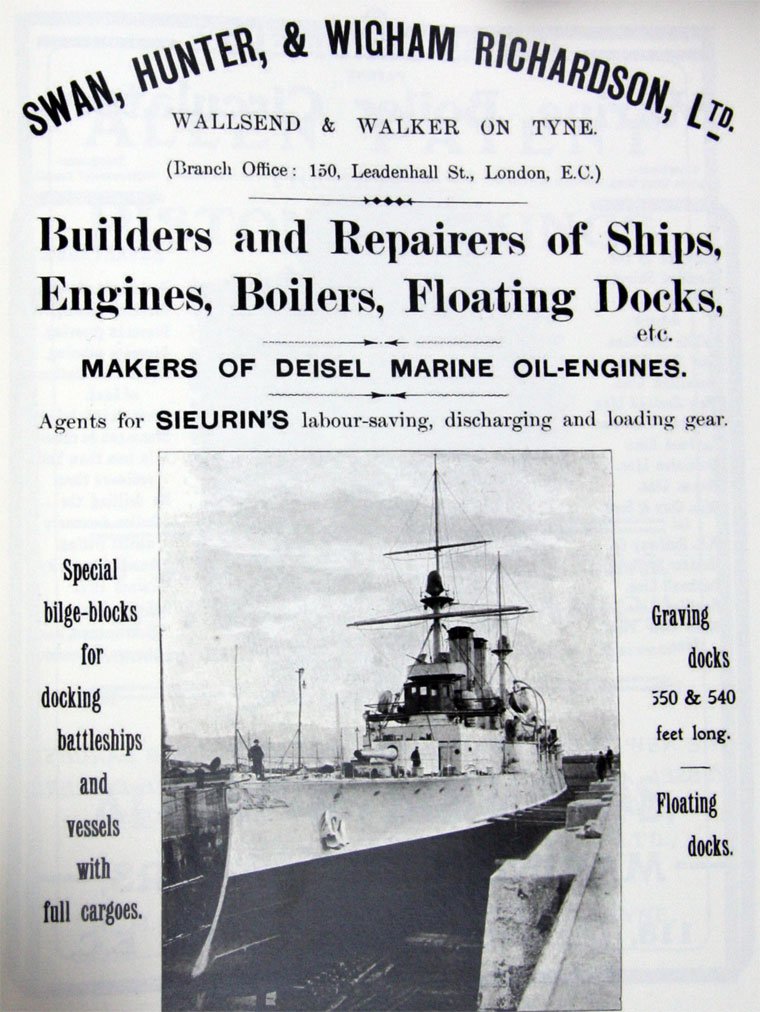 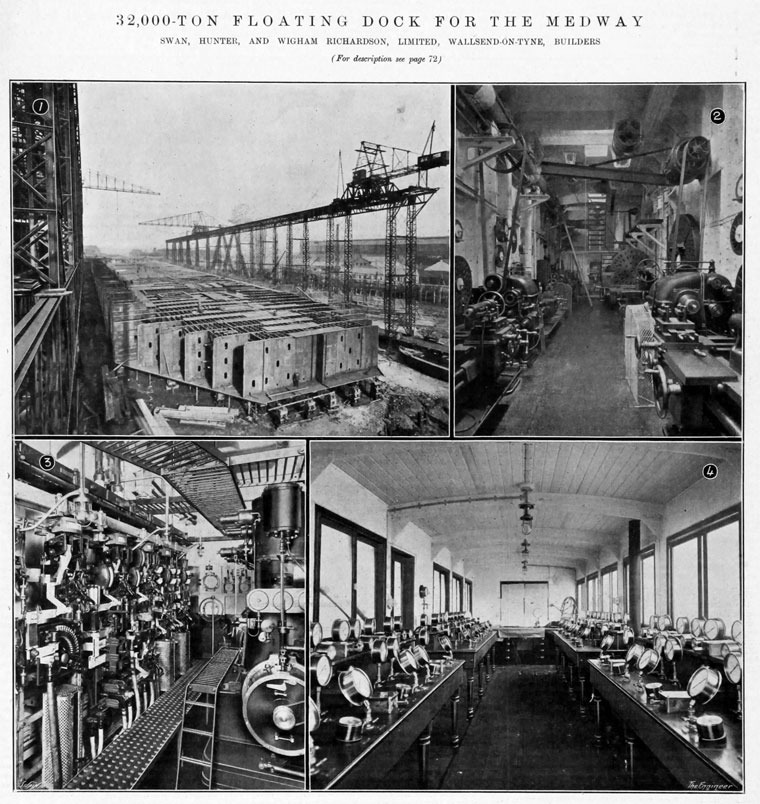 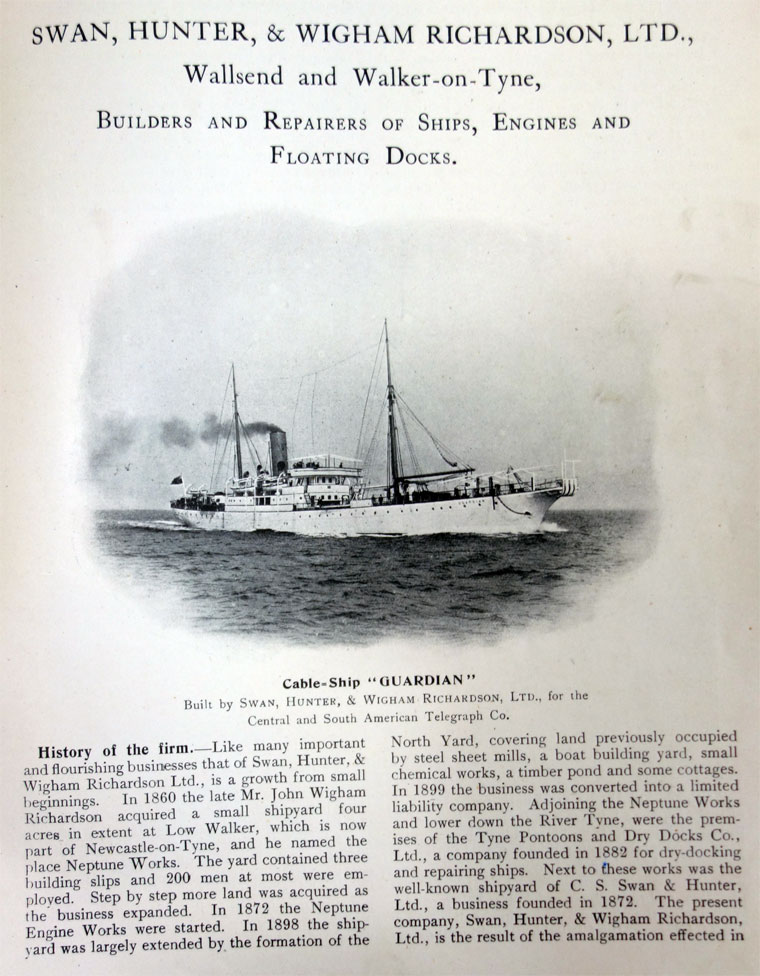 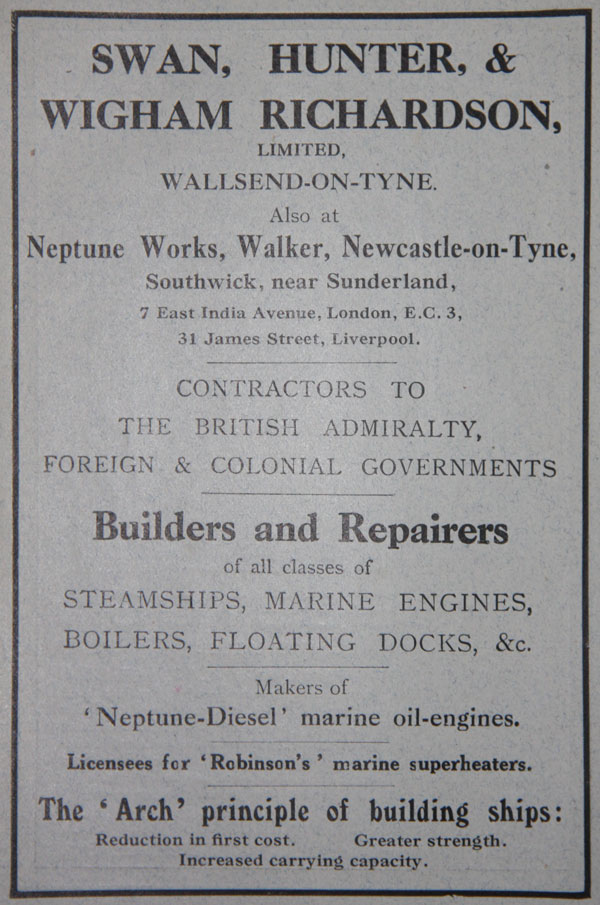 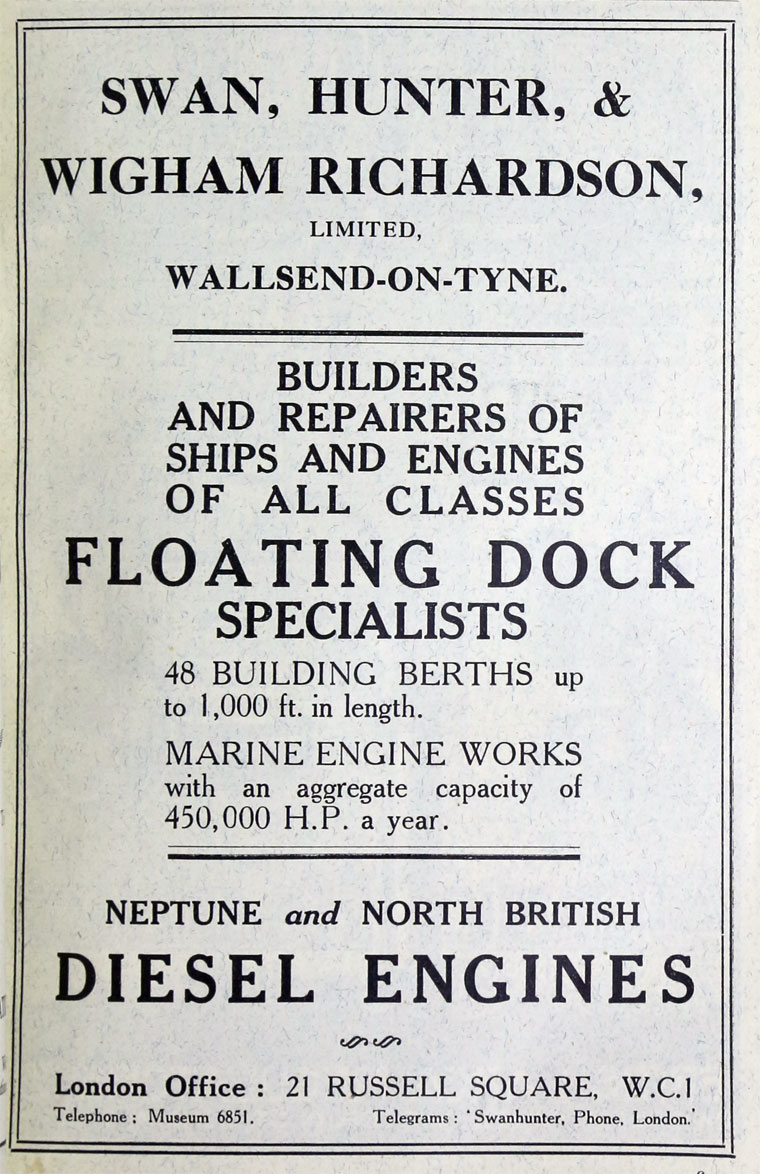 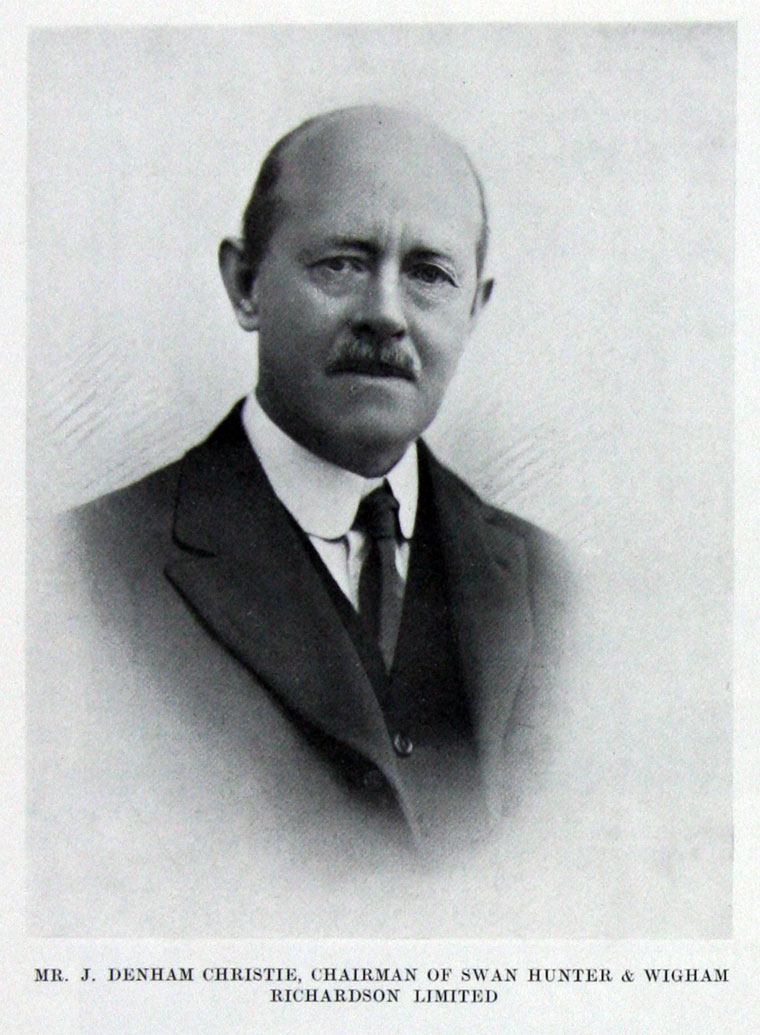 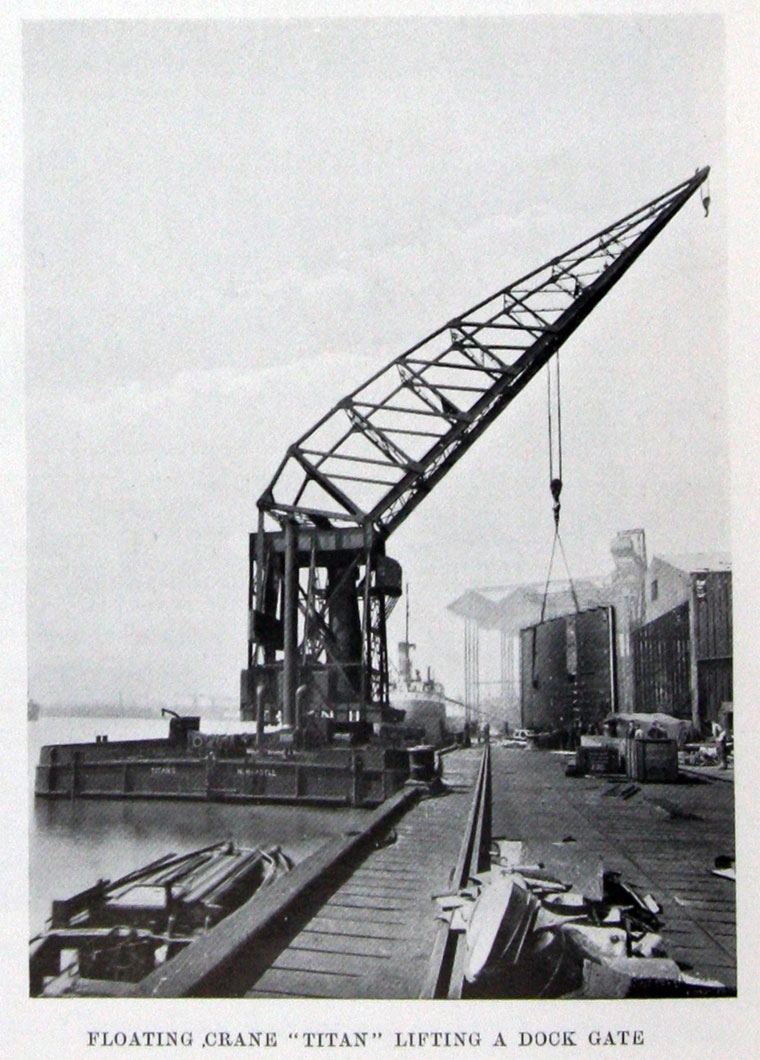 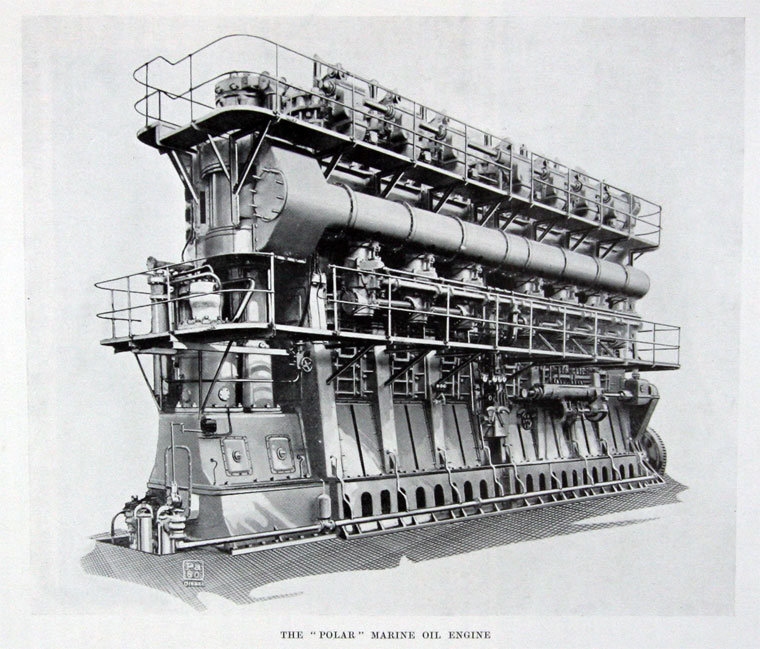 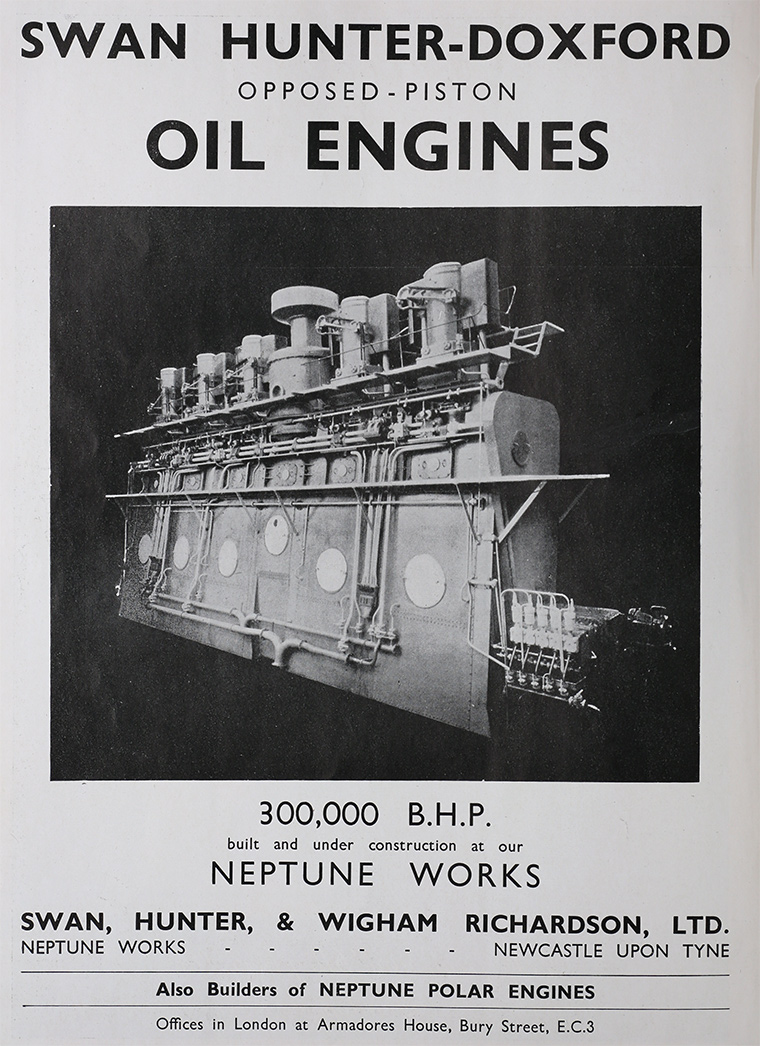 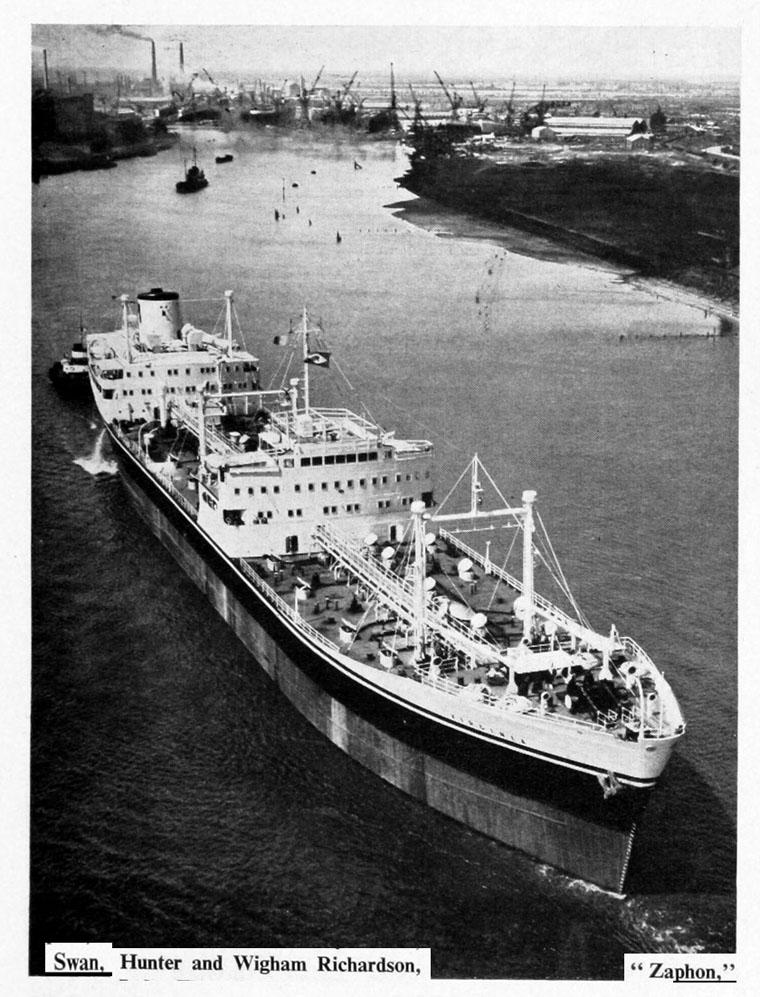 Based in Wallsend Shipyard, Tyne and Wear, the company was responsible for some of the greatest ships of the early 20th century — most famously, the RMS Mauretania, which held the Blue Riband for the fastest crossing of the Atlantic, and the RMS Carpathia, which rescued the survivors from the RMS Titanic.

1903 C. S. Swan and Hunter merged with Wigham Richardson and Tyne Pontoons and Dry Docks Co specifically to bid for the prestigious contract to build the Mauretania for Cunard. Their bid was successful, and the new company, Swan, Hunter and Wigham Richardson, went on to build what was to become, in its day, the most famous ocean going liner in the world. The yard covered 80 acres with river frontage of 4,000 feet. The company was registered on 15 June. [1]

1903 The directors at the company formation were:[2]

Their premises were adjacent to one another on the deep bend of the Tyne on its north bank, about three miles east of Newcastle, together an area of 78 acres, with a river frontage of some 4,000ft, the shipyard and engine and boiler shops of the Neptune works being nearest to Newcastle, the dry docks department at Wallend east and north of them, and the Wallsend Shipyard at the end of the bend nearest to the sea. Branches of the North Eastern Railway run into and through the whole of the works, and bring them into communication with the numerous local collieries and steel works. Modern machinery has been laid down for the rapid execution of work, and in addition to the shipyard the premises comprise the yard for constructing floating docks; the engine and boiler works, which have together an annual output capacity of 60,000 ihp; a dry dock, 550ft. long, 76ft. wide at the entrance, and with a depth of water over the sill of 26.5ft; and two floating docks lifting vessels up to a length of 350ft [3].

1903 Took a majority holding in Wallsend Slipway Co, which built the engines for some of its greatest ships. That company was an early manufacturer of Parsons turbine engines, which enabled the Mauretania to achieve its great speed. The Tyne Pontoons and Dry Docks Co whose installations lay between the Wallsend West Yard and Neptune Works, was purchased to form the Dry Docks Department. This latter acquisition gave the company an unbroken river frontage of some 4,000 feet, and works covering nearly 80 acres

1904 Output of two yards combined. Including two banana boats completed for Elders & Fyffes. Also Marina and Manistee both 3,868 grt, as well as the Yacht Albion (1116/04) for Sir George Newnes. [4]

1904 Hopemount Shipping Co was set up on 21st June with a subscribed capital of £12,000 with the objective of trading speculation ships built by the yard. Hopemount 3300/05 was completed by the yard and was managed by Stamp, Mann and Co of Newcastle. She was a 5,000 dwt and a conventional “three-island” tramp with five holds of which No. 3 hold was the cross-bunker hold between bridge and engineer accommodation. The centre island was extended to include a no. 4 hatch and no.5 hatch was in the aft well deck.

1912 The Elderslie Dockyard at Scotstoun on the Clyde (owned by Barclays) was taken over in May, with a 500 foot dry dock. The dock had been built earlier for John Shearer and Sons. The dry docks in Govan (also owned by Barclays) were also acquired as was Barclaay's Clydeholm yard

1912 A new four berth yard was opened under the Swan, Hunter and Wigham Richardson name at Southwick on the Wear (see below) to take up excess orders for tramps, colliers and Great Lakes steamers.

1920 The yard was fully occupied completing ‘B’ types.

1920 Swan, Hunter Wigham Richardson and Co and Beardmores together acquired the Glasgow Iron and Steel Co.

1922 The company extended its assets to include the North of Ireland Shipbuilding Co, Londonderry, shipbuilders Philip and Son, Dartmouth, the North British Engine Works (1922) Ltd, Glasgow and Stobcross Boiler Works, Glasgow along with iron and steel works in Glasgow and ship repairers in Swansea. This meant the company had the capability of producing many sets of steam turbines, Bauer-Wach exhaust turbines and triple expansion steam reciprocating engines both on the Clyde and at the Neptune Engine Works on the Tyne.

Swan Hunter obtained a licence from the Swedish engine designer AB Diesel Motorer of Stockholm that became the basis for two different designs of Neptune engines introduced during the early 1920s, the so-called "A" and "B." Both operated on the two-stroke cycle and used blast fuel injection.

Both engine-building works went onto produce many sets of diesel and oil engines.

Swan Hunter was also instrumental in establishing the North British Diesel Engine Works at Whiteinch on the Clyde and effectively competed with itself for diesel engine orders during the difficult period of the 1920s.

The company also had a subsidiary salvage company called the Sunderland Salvage Company of Lindsay Swan, Hunter who undertook a number of major operations in the West Indies.

WW2 Just before the outbreak of war, extensive orders were in hand, and some 55 ships were completed for private owners up to early 1946 under Government licence. Warship construction was intense including the battleship Anson (June 1942) along with four cruisers ordered in 1937: Mauritius (1940), Newfoundland (1941), Gambia (1942) and Superb (1943). Other vessels included 30 destroyers and destroyer escorts including 16 of the Hunt class.

1941 In June King George VI and Queen Elizabeth visited the Neptune yard and other Tyneside yards in an attempt to boost morale.

1946 The Neptune Yard continued its established tradition of building cable ships when it completed the cable-layer Monarch of 8052 grt in February for the Postmaster General.

1946 Tanker production resumed, which was a major feature of the yard’s output until they amalgamated with the other yards on the river in 1968. 60 tankers were completed out of 180 ships built by the Company over this period. This equates to one third of output.

1957 E. John Hunter, grandson of the founder, was appointed Chairman in May 1957. Prior to this, in 1939, he was appointed Assistant Manager of the Wallsend Dry Docks Dept, becoming General Manager in 1943. He became a Director of Swan, Hunter and Wigham Richardson in 1945. He led the group through the 1960s and 1970s and died in retirement in 1981 at the age of 71 years. Robert Hunter (his younger brother) was appointed manager of the Wallsend Dry Docks Department in succession to his elder brother in 1957. There were also descendants of the Swan and Wigham Richardson families on the board at this time (S. C. Swan and George Wigham Richardson) as well as Peter Denham Christie, whose grandfather had been the first manager of the Neptune yard and whose father John Denham Christie had died in October 1950.

1912 The Southwick yard was opened by Swan, Hunter and Wigham Richardson as an overspill for its other yards, as it had excess orders for colliers, coasters and Great Lake Steamers from their main yards.

WWI The yard's key output was for the War effort

1930 When the Depression started the yard had completed fifty ships. The Yard was closed because of the Depression, as its main owners had no use for it.

1931 The last ship to be built at the yard was Flathouse in 1931. It was bought by the National Shipbuilders Security and was due to be dismantled.

In late 1942 workers from Joseph L. Thompson began working on the site and the yard rejuvenated itself again.

1943 The yard was known as the National Shipbuilding Corporation (Wear) yard and began launching its own ships from December 1943.

1947 A number of tramps and a few coastal tankers and barges were completed by the end of 1947 then the yard closed in 1947.