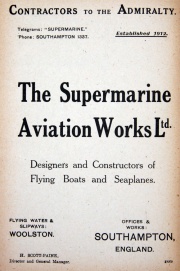 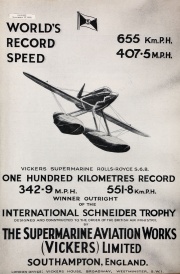 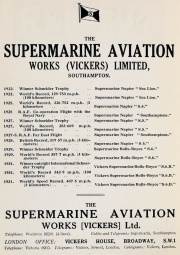 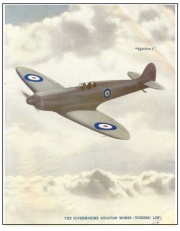 Supermarine Aviation Works Ltd was a British aircraft manufacturer that become famous for producing a range of sea planes and the legendary Spitfire fighter.

A separate entry for Supermarine Aircraft details the models produced.

1913 Noel Pemberton-Billing set up a company, Pemberton-Billing in 1913 to produce sea-going aircraft. It also produced a couple of prototypes using quadruplane designs to shoot down zeppelins; the Supermarine P.B.29 and the Supermarine Nighthawk. The aircraft were fitted with the recoilless Davis gun and the Nighthawk had a separate power plant to power a searchlight.

1916 Upon election as an MP in 1916 he sold the company to his factory manager and long time associate Hubert Scott-Paine who renamed the company Supermarine Aviation Works Ltd.

1922 Scott-Paine financed and built the "British Challenger", a Sea Lion II, with which Britain won the 1922 Schneider Trophy at Naples

1925 Faced with American victories in the Schneider Trophy, the British government stimulated new work; the company hired Oliver Simmonds to help with the aerodynamic design.

The company became famous for its successes in the Schneider Trophy for seaplanes, especially the three wins in a row of 1927, 1929 and 1931 with the S5, the S6 and the S6B

The first Supermarine landplane design to go into production was the famous and successful Spitfire. The earlier Hurricane and the Spitfire were the mainstay of RAF Fighter Command fighter aircraft which fought off the Luftwaffe bombing raids with fighter escorts during the Battle of Britain in the summer of 1940. While the Hurricane was available in larger numbers and consequently played a larger role, the new Spitfire caught the popular imagination and became the aircraft associated with the battle.

1939 All Vickers aircraft constuction activities transferred to Vickers-Armstrongs at government request[2], although Supermarine continued to design, build and trade under its own name.

The Supermarine main works was in Woolston, Southampton which led to the city being heavily bombed in 1940.

WWII Other well-known planes from World War II were the Seafire (a naval version of the Spitfire). Supermarine also developed the Spiteful/Seafang the successor of the Spitfire/Seafire and the Walrus flying boat.

After that, in the shakeup of British aircraft manufacturing, Vickers-Armstrongs (Aircraft) became a part of the British Aircraft Corporation and the individual manufacturing heritage names were lost.

Northshore Marine builds a range of motorboats under the Supermarine name in Chichester.