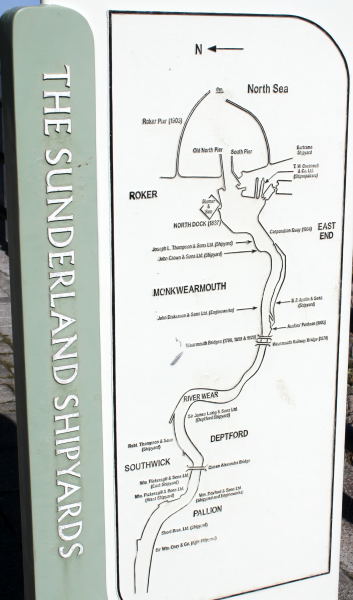 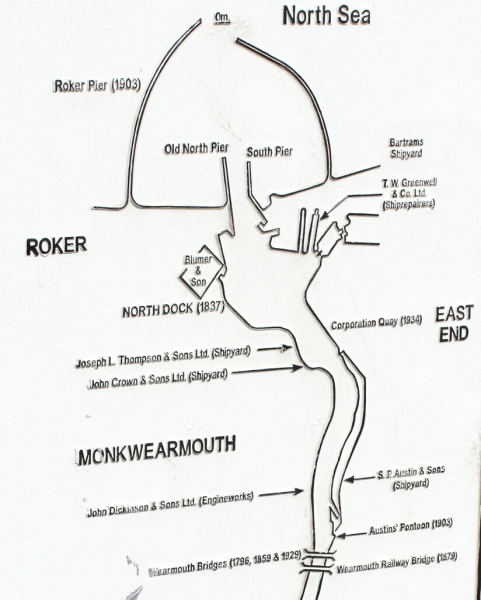 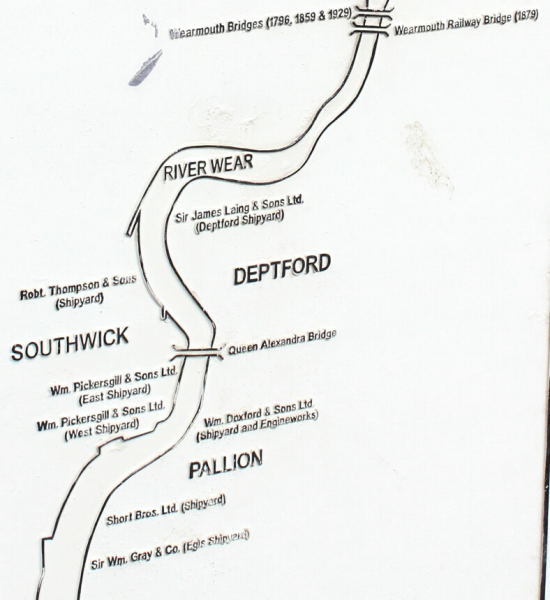 Sunderland was a major centre for shipbuilding and marine engineering, with many yards on the River Wear. For many years it could legitimately claim to be the biggest shipbuilding town in the world (as distinct from the most productive river: tonnage launched on the Clyde was often greater, but the Clyde yards were located in a number of different towns).[1]

During WW2, 1.5 million tons of merchant shipping was produced, 27% of the total output of British yards.

Vistors will struggle to find tangible evidence outside the excellent Sunderland Museum, but a token effort at outdoor commemoration of the city's proud shipbuilding heritage has been made, in the form of a marker on the riverside walk on the north bank of the Wear (see photo).

From east to west

Bartram's - see Bartram and Sons (South Hylton), later Bartram, Haswell and Co of South Dock. The yard was taken over by Austin and Pickersgill, and closed in 1978.

John Blumer and Co of North Dock. Closed in the 1920s.

Joseph L. Thompson and Sons. Closed in 1979, but yard reactivated for specific work, but closed after 1986.

Sir James Laing and Sons of Deptford Yard. Closed in 1985.

Sir William Gray and Co of Pallion. They took over the yard of the Egis Shipbuilding Co, which closed in the 1930s.

Yards not shown on map:-

Osbourne, Graham and Co of North Hylton. Closed in 1925.

Note: Many more shipbuilders are listed in the Sunderland Built Ships website[2]. Many of these will have been makers of wooden sailing vessels. In fact, in 1840 Sunderland produced no less than 251 ships, having an average tonnage of 257.[3]