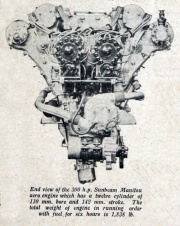 Note: This is a sub-section of Sunbeam: Sunbeam-Coatalen.

A direct development of the Afrida

The Sunbeam Manitou was a further development of the V-12 Maori Mk.III; work on it was begun by Louis Coatalen in 1917, using aluminium alloy rather than cast iron blocks, cast in blocks of three cylinders, a typical Sunbeam feature. Bore was increased to 110 mm (4.33 in), but stroke remained at 135 mm (5.31 in). The cylinder bank were at a 60° vee, with twin overhead camshafts on each bank operating four valves per cylinder. Two Claudel-Hobson carburettors and two BTH magnetos delivered mixture to the cylinders and ignited it. Fitted with a reduction gear for aircraft the engine developed 300 hp (224 kW)at 2,000rpm., later increased to 325 hp (242 kW). Unsuccessful as an aero-engine, it is best known for having powered the Sunbeam 350HP racing car.

Despite large orders for 840 Manitous, only 13 were built before production stopped. Those that were built found favour as motor-boat power-plants and only one flew trials in a Short 184 seaplane. Four were fitted to the 'Maple Leaf V' and a specially built Manitou was fitted to the 350hp Sunbeam racing car.

The Manitou was noteworthy for being fitted to the 350hp Sunbeam racing car in 1920, which was later bought by Malcolm Campbell to set land speed records and became one of Campbell's Blue Birds

Coatalen redesigned the engine substantially for use in the 350 hp Sunbeam car. The twin-cam four-valve head was replaced by a single-cam three-valve head, possibly from the Arab, the increase in bore to 120 mm allowing space for three valves.

To ensure adequate bearing surface at the big ends Coatalen retained the articulated connecting rods, where one rod runs on the crankshaft journal, but the other acts indirectly, through a journal on the other rod. The difficulty is that this gives a slightly different piston stroke and journal rotation centres for each bank, which can lead to unbalance and possible vibration problems. Stroke was thus 135 mm on one bank and 142 mm on the other.

After initial use by Coatalen, the car was sold to Sir Malcolm Campbell for an attempt at the world land speed record.