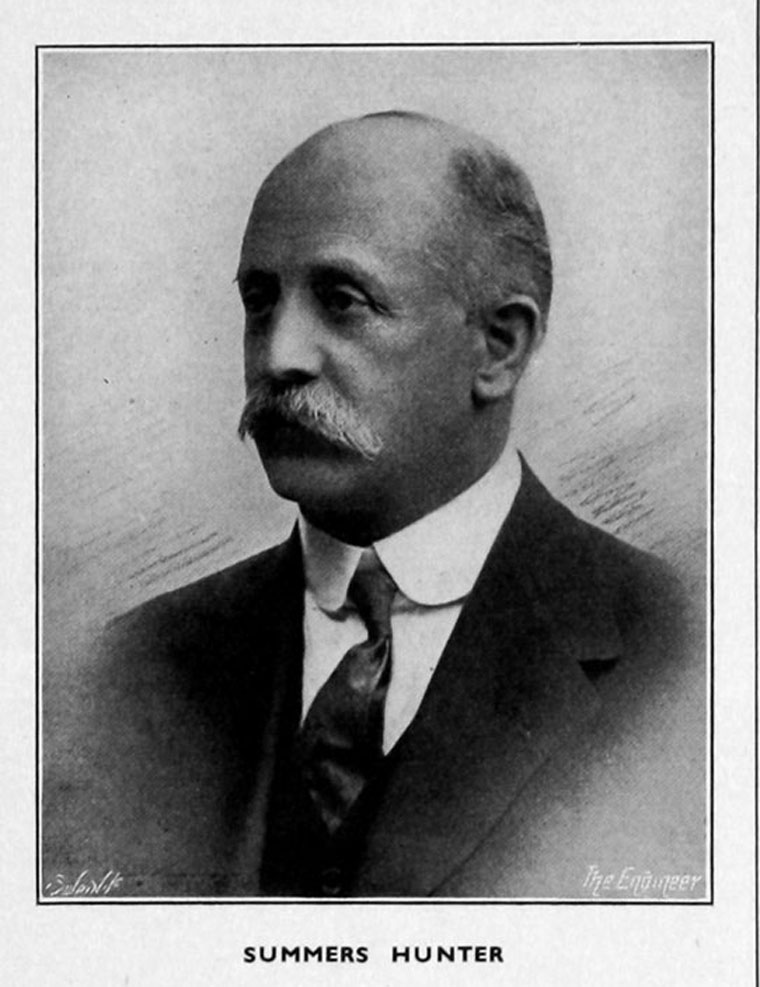 1915 Member of the Departmental Committee on Bulkheads

"..Summers Hunter, which occurred at the age of 84, on Sunday, January 7th , at his home, Darien, Stocksfield, Northumberland, Great Britain has lost an outstanding marine engineer, who was known not only in Tyneside circles, where most of his life was spent, but in all parts of Great Britain and the continent. He came from Scotland, and was born in Inverness in 1856. His early education was received in Scotland, but he started work at the early age of 14, and was apprenticed to a Staffordshire firm of name Barker and Cope..."

SUMMERS HUNTER, C.B.E., will be remembered for his distinguished work for the shipbuilding industry on the North East Coast. During his long connection with the North Eastern Marine Engineering Company, Ltd., of Wallsend on Tyne and Sunderland, he was associated with several notable developments in marine engineering; moreover, he was keenly interested in the work of several technical societies, in many of which he was a leading figure; and he found time to devote much attention to the training and welfare of apprentices.

Mr. Hunter was born in 1856, and after receiving his early education in Inverness, he went to Burslem, Staffs, and in 1870 became an apprentice in Messrs. Barker and Cope's general engineering works at Kidsgrove. At this time he studied at the Wedgwood Institute, Burslem. In 1880, however, he turned his attention to marine engineering, and joined the North Eastern Marine Engineering Company, for whom he worked on the installation of marine machinery. In 1881 he went to sea as guarantee engineer on behalf of the firm and passed for chief engineer in 1882. He then returned to the company's Wallsend works as outside manager, and was promoted to be assistant general manager in 1889 and general manager in 1895. He became general manager of both works, at Wallsend and Sunderland, in 1900 and was also made a director.

Shortly afterwards he was appointed managing director, and in 1920 he became chairman, a position which he occupied until his retirement in 1929. Among the principal advances in marine engineering with which he was associated were the introduction of superheating, and the development of the marine oil-engine. Mr. Hunter was keenly interested in the production of special cast irons for marine engines, and was a former vice-president of the British Cast Iron Research Association. He was also an early advocate of the use of electric power for driving cranes and workshop machinery.

During the Great War he served on several Government committees and was awarded the C.B.E. for his national services. For several years he was chairman of the Standing Committee of the North East Coast Engineering Employers' Association and he also served on the council of Armstrong College, Newcastle upon Tyne. He was also a director of the Iron Trades Employers' Insurance Association, and of Liquid Oxygen Explosives, Ltd., and the Tyneside Tramways and Tramroads Company.

Mr. Summers Hunter, one of the leaders of marine engineering in this country, died at his home at Darien, Stocksfield, Northumberland, on January 7, 1940.

Mr. Hunter began his engineering career at the age of 14, when he started work as an apprentice. Later, in 1880, he joined the North Eastern Marine Engineering Company, Ltd., and served first in the workshops and then as a sea-going engineer.

Afterwards he was appointed to the company's new Walisend works, becoming General Manager, and finally Managing Director in 1900.

In 1920 he was appointed Chairman, a position which he held until he retired in 1929 after 49 years' service with the company.

Among other improvements to steam engine design, Mr. Hunter introduced the Schmidt system of superheating, which met with immediate success. He was interested also in Diesel engines, and engines of this type built by the firm were also highly successful. By the introduction of electric power throughout the workshops, as well as other labour-saving devices, Mr. Hunter did much to improve the workshop conditions.

Mr. Hunter took an active part in public life and in local government. During the war of 1914-18 he served on many Government committees and was given the C.B.E. in recognition of his services. He was an active member of many civil and marine engineering institutes and, in 1932, was elected an Honorary Fellow of the North East Coast Institute of Engineers and Shipbuilders, in recognition of his contributions to the development of marine engineering.