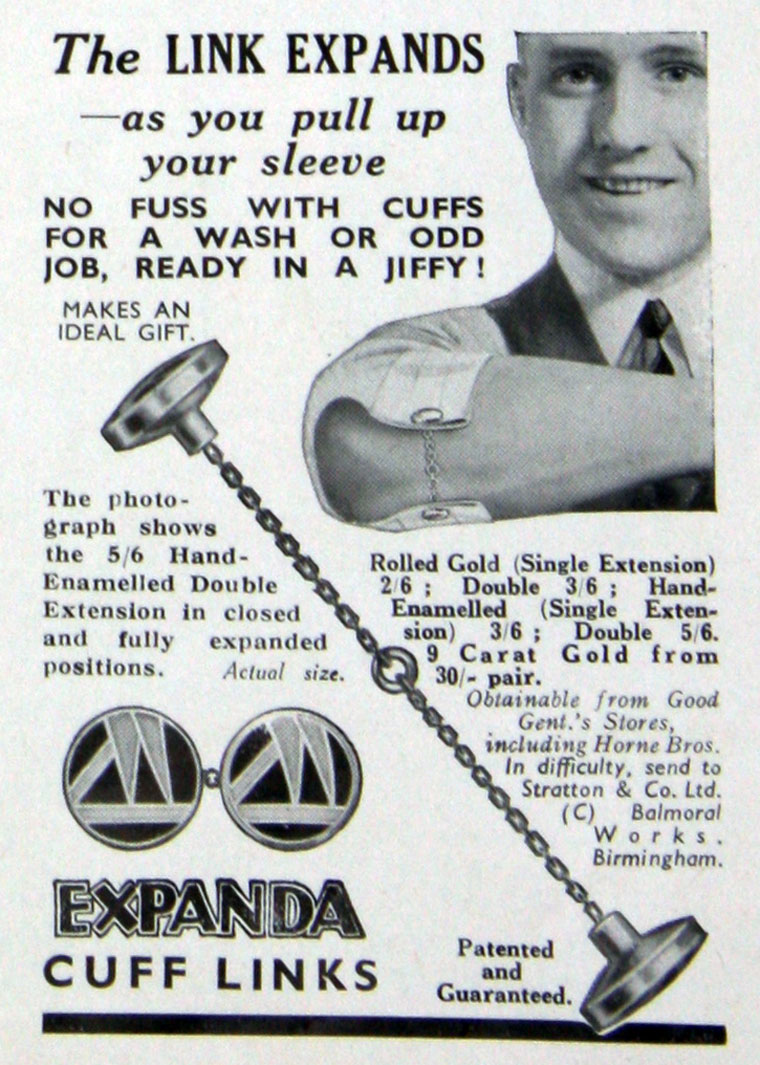 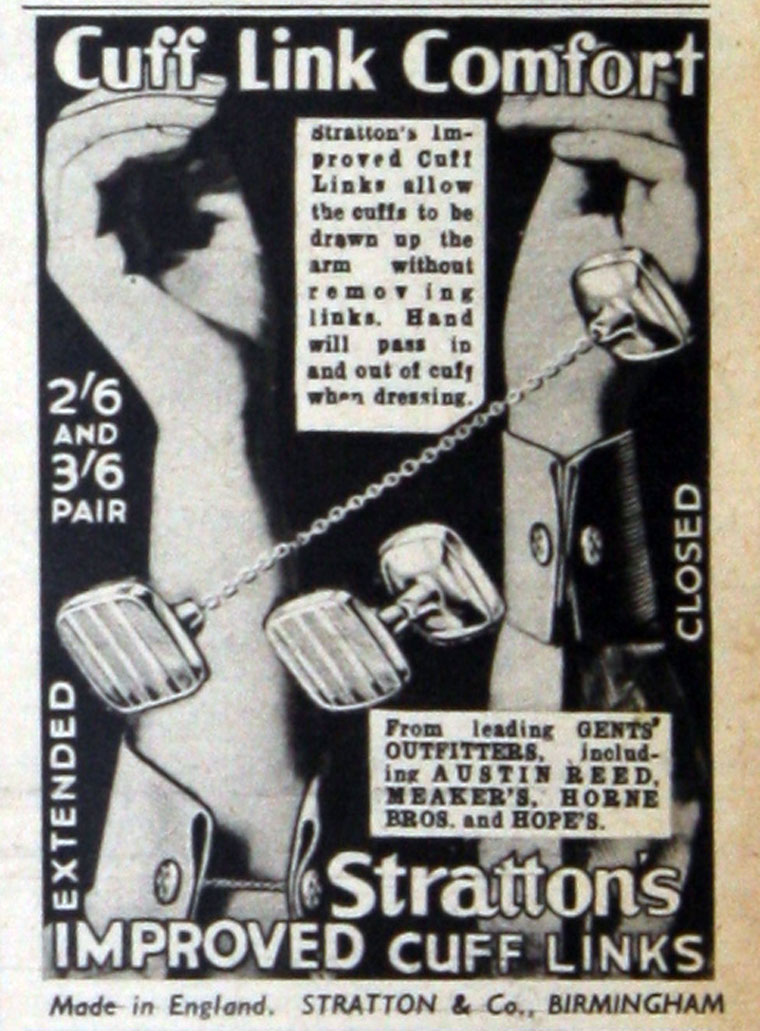 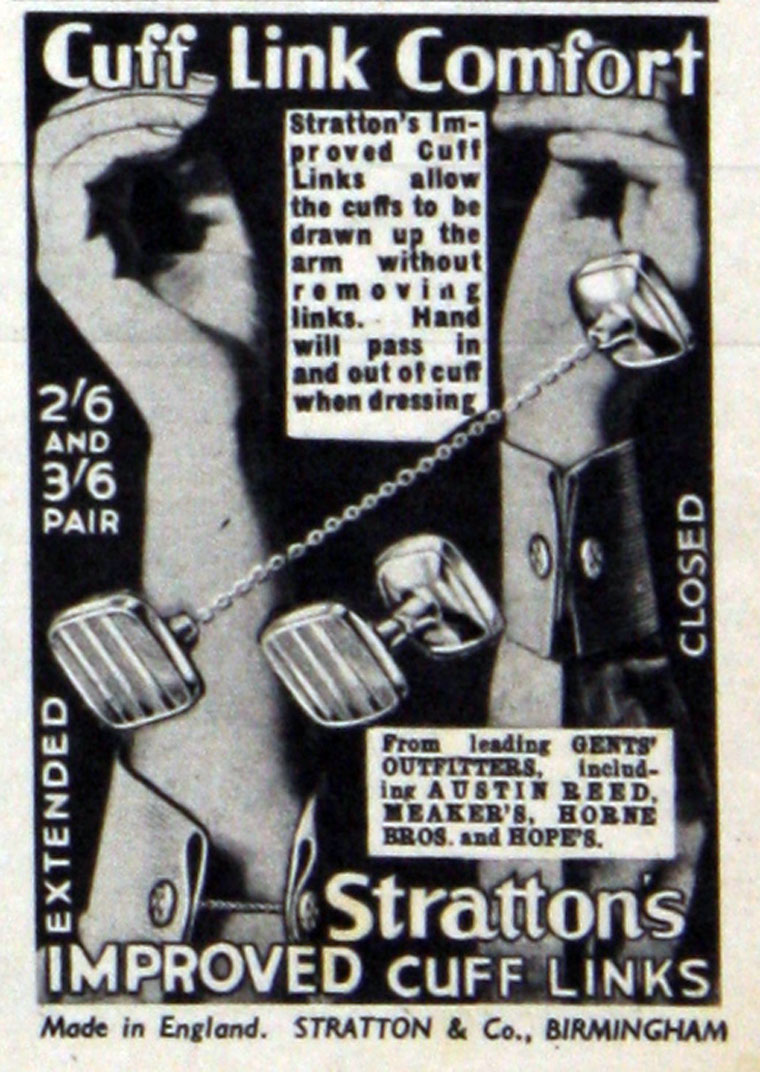 1911 George Abe Laughton was running a small section of Jarrett and Rainsford, selling coronation badges and flags. Components were bought in from a small supplier who suffered from the ravages of alcohol and supplies were erratic. Laughton bought the business for £50 and acquired four hand presses and two girl workers. He named this enterprise Stratton, reputedly after the hero in a novel his wife was reading.

1912 Laughton was elected a director of Jarrett and Rainsford. He would then have been 29 years old. The two companies followed their parallel courses, with Stratton and Co concentrating on men’s jewellery.

WWI. The firm manufactured parts for the famous SE5 British fighter plane and acquired much experience in the use of aluminium and duralumin alloy. This was to be of great value in the radio business.

1920 JRL acquired Stratton and Co. Although artificial jewellery was back in production, pins were still a staple part of the company’s output.

1922 In November, the British Broadcasting Company (BBC - forerunner of the present Corporation) was formed and started broadcasting with low power transmitters in major British cities. The best known of these stations was the London station in the Strand. The Birmingham station was opened the following day.

Stratton Laughton (son of George A.) became a ‘wireless fan’. Because equipment was expensive, home construction was wide-spread. The cinema had also become a major source of entertainment during the First World War. This was the era of the ‘Roaring Twenties’ and the introduction of the pageboy hair style. This style needed no hairpins and Stratton’s market dwindled overnight from six tons to one.

1923 This happened towards the end of 1923 so Stratton Laughton suggested to his father, George, that the shortfall in sales be made good by entering the radio component field. Stratton Laughton claimed that the company started manufacturing components for home constructors in 1923, shortly followed by complete receivers in 1924. He also claimed that Stratton’s was one of the first firms associated with the original British Broadcasting Company. (Unfortunately there is no evidence to substantiate these claims as the majority of company records were destroyed during the Blitz of the Second World War).

1925 Stratton’s first radio-related patent was filed in February, as was the Trademark Eddystone and the Lighthouse device. The company’s single £1 BBC share certificate (which escaped the blitz) is dated September. By the end of the year there were 1716 members of the BBC.

Stratton’s took on Harold Cox and Arthur Edwards during this period and these two were to provide a driving force for the next forty years. Harold became Technical Director and Arthur became Sales Director, continuing with the firm until the late 1960’s.

1927 Short waves were well established across the world, due to the pioneering work of early radio amateurs. One of these was Gerald Marcuse, who obtained a permit from the British Postmaster General to transmit speech and music to the British Empire. The first transmission was on 11 September and the experiment continued for almost a year. The BBC also started experimental broadcasting on 20 metres from G5SW, Chelmsford (Marconi) in November 1927. The result was a demand for shortwave receivers from British expatriates. Stratton and Co were ready to fill that need and produced what is believed to be their first short wave set, the Atlantic Two.

1930s The company had ceased making medium wave only sets and from then on everything was focused on the higher frequencies. Sets were produced by the company in bewildering variety. Eddystone receivers were used by many scientific expeditions of the 1930s, such as the British Arctic Air Route Expedition and the Hudson Strait Settlement Expedition.

1935-38 Work started on VHF experiments and portable Eddystone five-metre equipment was used by the 1936 Mount Everest Expedition. During the years 1935-8 much effort was made demonstrating to the police and military to gain acceptance of VHF equipment for use in cars and tanks, but without success. It was not until after 1938, when war was looming, that Stratton’s were to serve a purpose of national importance in this field.

1939 The London Metropolitan Police Authority covering some 95 police stations and Scotland Yard, sent an urgent request to Stratton and Co to tender for an automatic wireless telephone network. This was accepted, and work commenced day & night to complete the system for July.

1940 The factory was bombed and destroyed on 26 October.

WWII. During the war no further damage took place and over 4.5 million components for use by H. M. Forces were manufactured. Just over 4,500 transmitters, 7,264 receivers and 45,000 other supplementary pieces of equipment were supplied, for Police, Army, Royal Air Force, but mainly Admiralty requirements.

Post-WWII. After the war ended times were difficult in the radio business. War surplus depressed world markets. A major decision, perhaps an error, was made not to re-enter the VHF two-way radio field. It was decided to concentrate on specialised communication equipment, well constructed for performance and stability and selling on these points rather than price; a policy which brought success for many years.

1964 George Abe Laughton died and the company reached a crossroads. Eddystone Radio was the odd man out in a family company that produced goods for the cosmetic market and the “Woolworth’s” trade. The family felt that the communication business had grown in complexity beyond their understanding.

1965 A decision was made to sell the radio business to one of their largest customers, Marconi. Solid state was just starting.

1973 It was to overlap valve production by about a decade and the last valve set was manufactured in 1973. At about this time Marconi made a policy decision that their subsidiary, Eddystone Radio, should pull out of the High Street and concentrate purely on professional receivers.

The H.F. receiver market was starting to shrink due to competition from the Far East. The size of ships grew, requiring fewer radios. The ocean liner ‘cabin set’ market vanished in the new ‘air travel for all’ regime. Satellite communication became a practical reality.

c1980 The company entered the broadcast transmitter field in partnership with the BBC. This was very successful and took things into the 1990s when Eddystone and the BBC pioneered the new Digital Audio Broadcasting (DAB).

1995 The lease on the premises at the Bath Tub expired and the company relocated on a small industrial estate in Selly Oak, within the City of Birmingham, ready to take up the digital challenge. Unfortunately the expected expansion did not materialise.

The end of the cold war had seen a big drop in government orders and the increase in satellite communication further reduced the demand for professional HF receivers. Combined with an economic crash in Malaysia, where a large VHF/FM broadcast transmitter order was cancelled, this spelled the end of Eddystone’s ownership by Marconi, itself in a parlous state.

1999 The firm was bought by Megahertz Communications. After three years in the doldrums Megahertz went into receivership and Eddystone Radio (receivers) was sold to Ring Communication. The Transmitter section has been sold to SBS of Hastings and is now known as Eddystone Broadcasting.