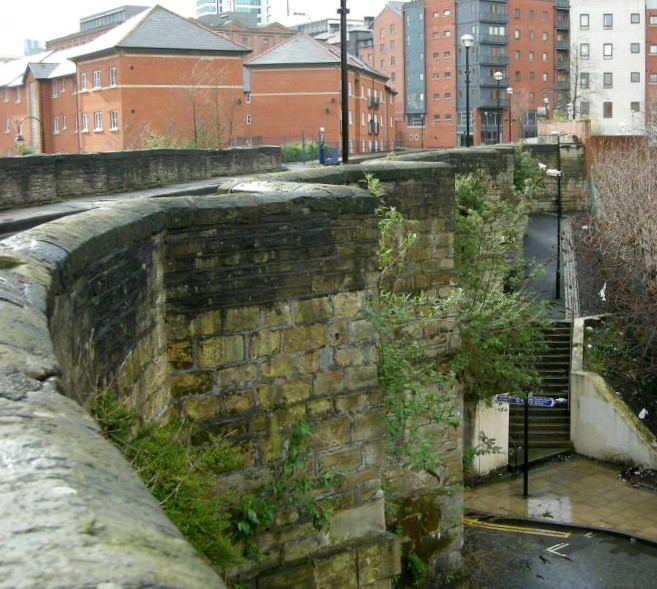 The Store Street Aqueduct in central Manchester was built in 1798 by Benjamin Outram on the Ashton Canal. A Grade II* listed building it is built on a skew of 45 degrees across Store Street, and is believed to be the first major aqueduct of its kind in Great Britain and the oldest still in use today.

Generally, where a canal (or later a railway) crossed a road, or vice versa, the road would be diverted to cross at right angles. It had not always been acceptable but attempts to build masonry arch bridges at an angle, or "skew" of greater than about 15 degrees, had proved unsatisfactory.

The method up to that time had been to build the voussoir arch with the stone course work parallel to the abutments. This transmitted the load outward from the crown in a straight line to the foundations, parallel to the faces of the arch. If a skew was attempted, it threw the lines of force outside the abutments, leading to weakness in the structure. William Chapman had partially solved the problem in 1787 when building bridges for the Kildare Canal, the first being the Finlay Bridge near Naas. The Kildare was part of the Grand Canal Company, for William Jessop had been the engineer. Jessop would no doubt have discussed it with Outram, his partner, and he experimented with the idea on the Rochdale Canal. Examples are Gorrell's Lane and March Barn road bridges, though it is possible that they were built later.

Although the aqueduct still exists, and is structurally sound, years of neglect led to water leakage through the joints, and the spiral construction can no longer be seen, the surface of the intrados having been rendered.

Later railway engineers improved on the system, producing what became known as helicoidal construction that became the norm in English skew bridge building. An exact solution to the problem was determined in the form of the French, or orthogonal, design. However this was complicated and expensive to build.

1896 photos here and here. The first photo provides a close view of part of the masonry, including what appears to be one of a number of filled-in openings.