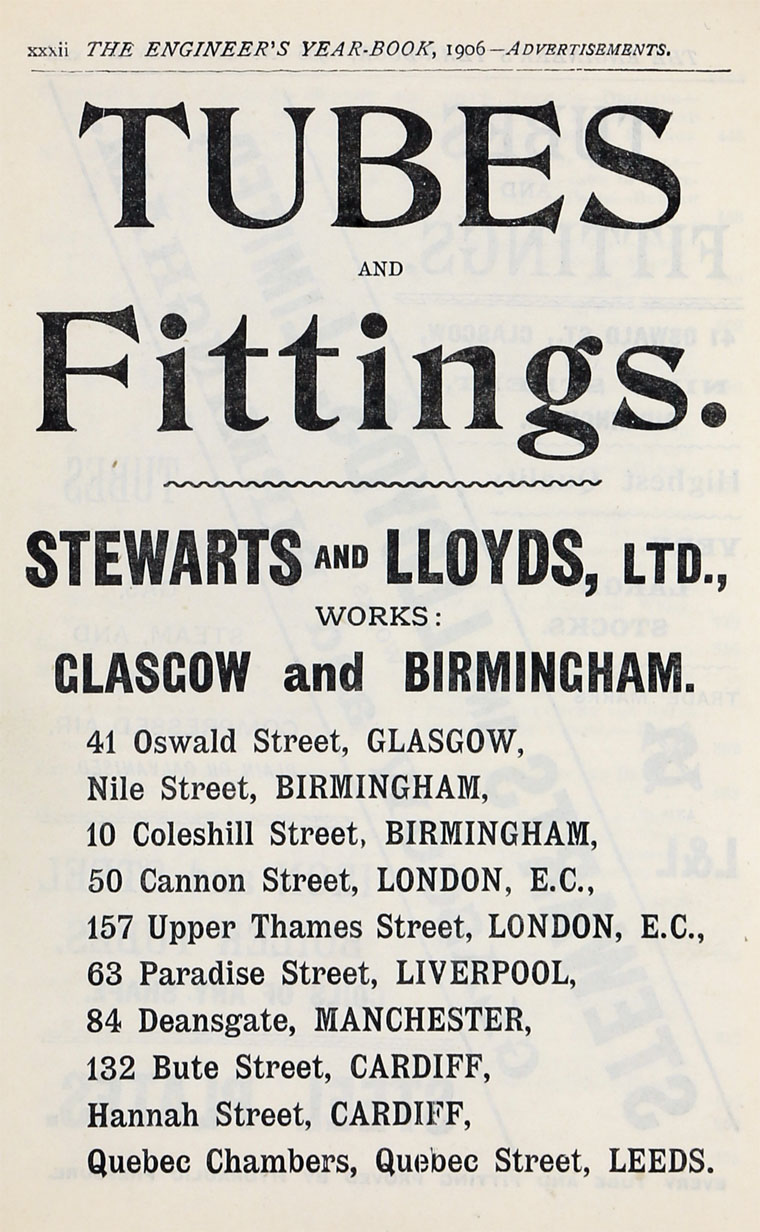 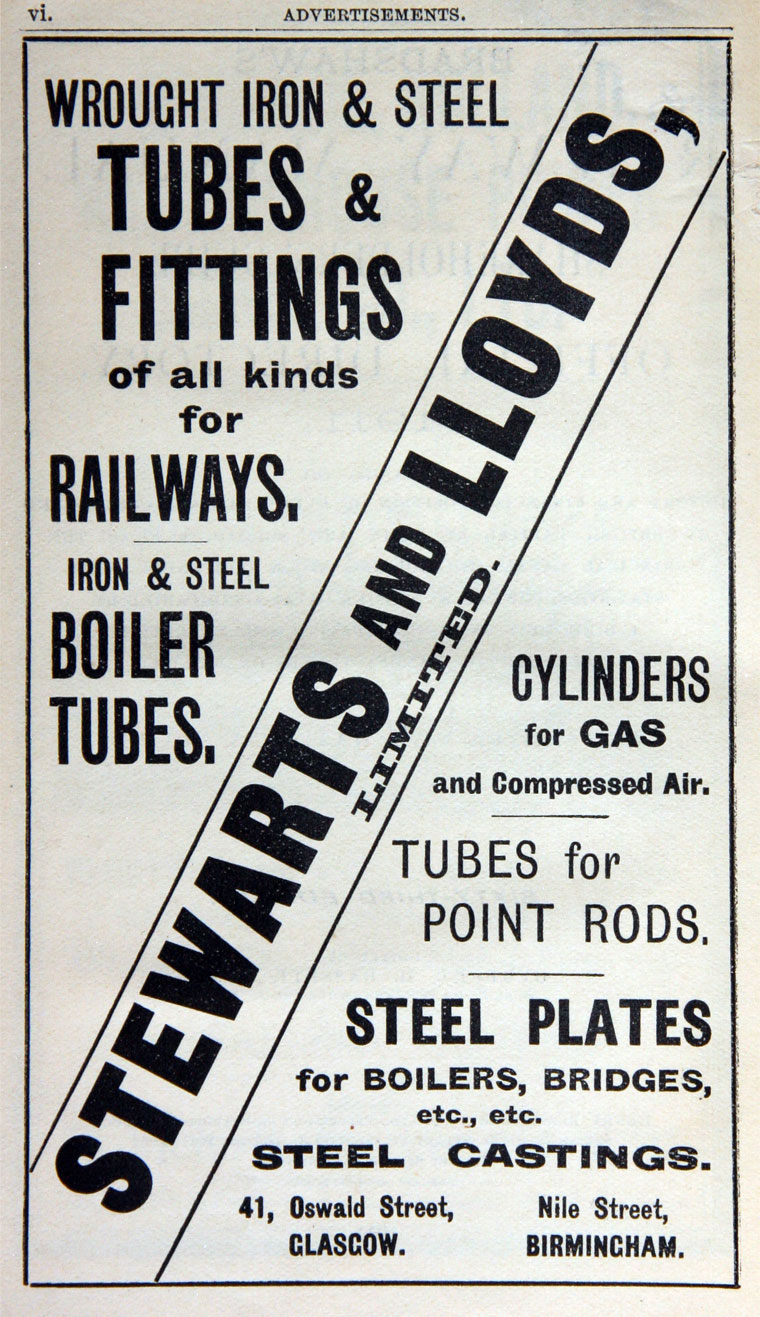 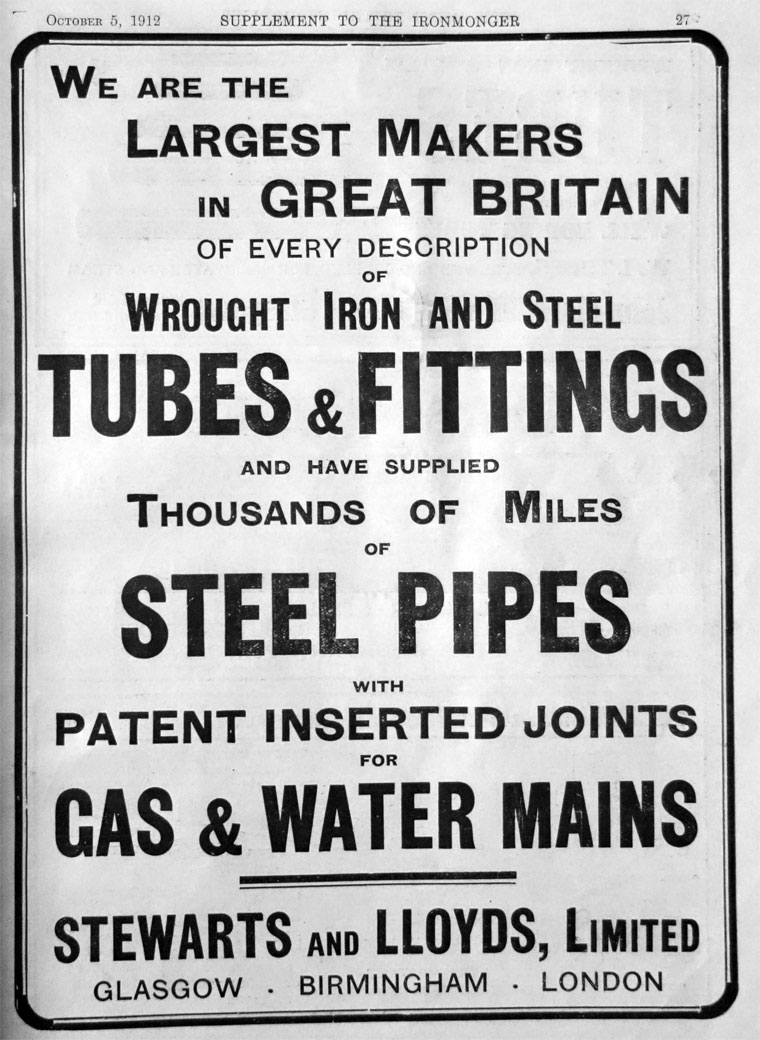 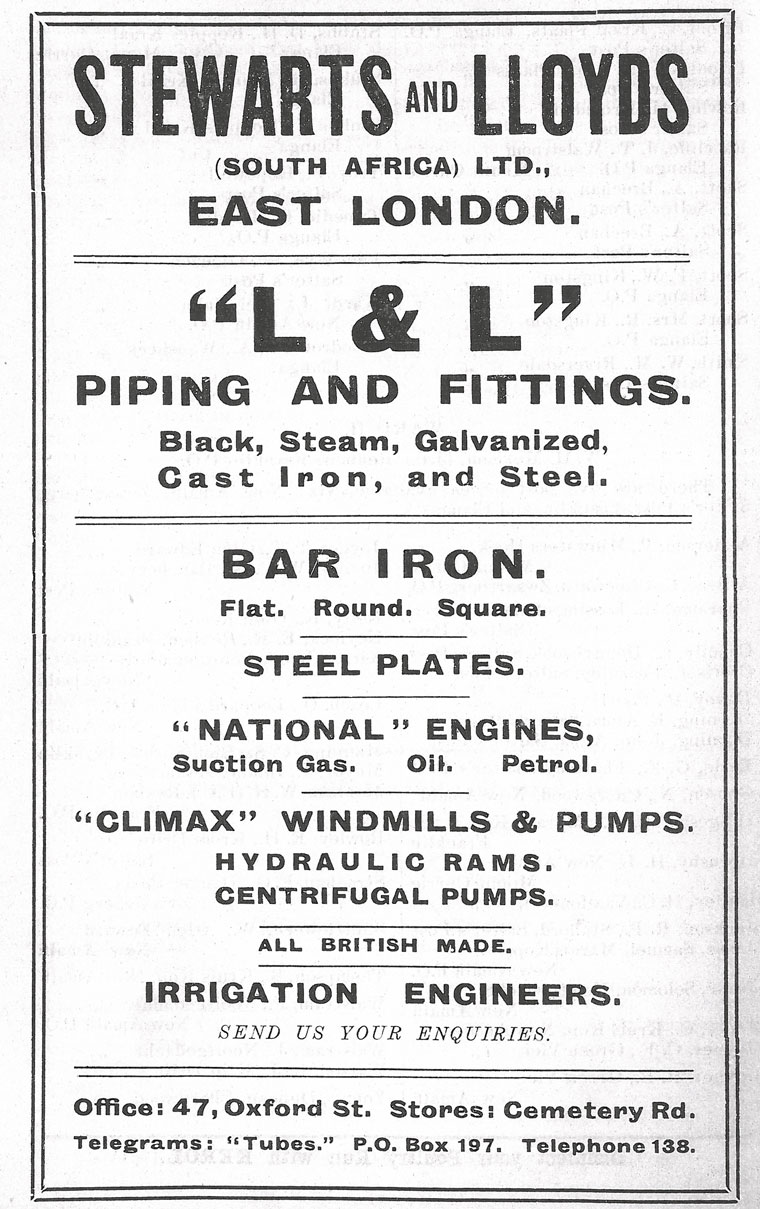 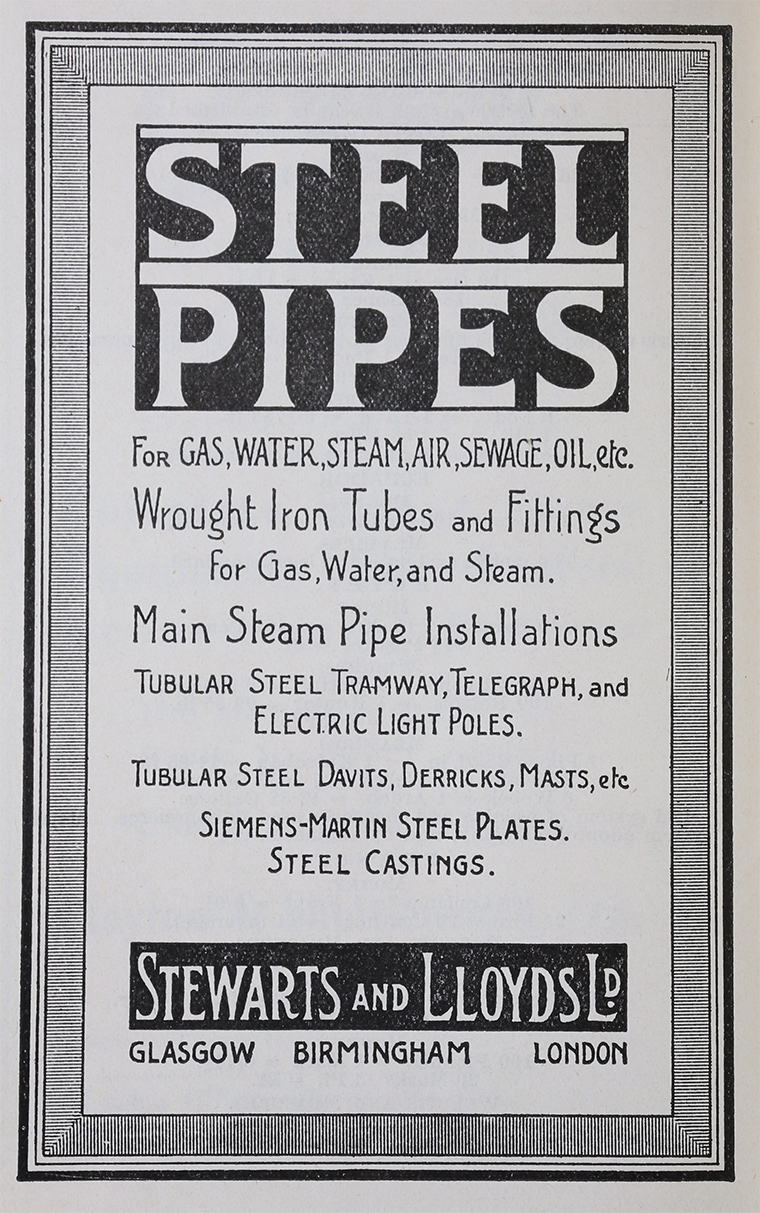 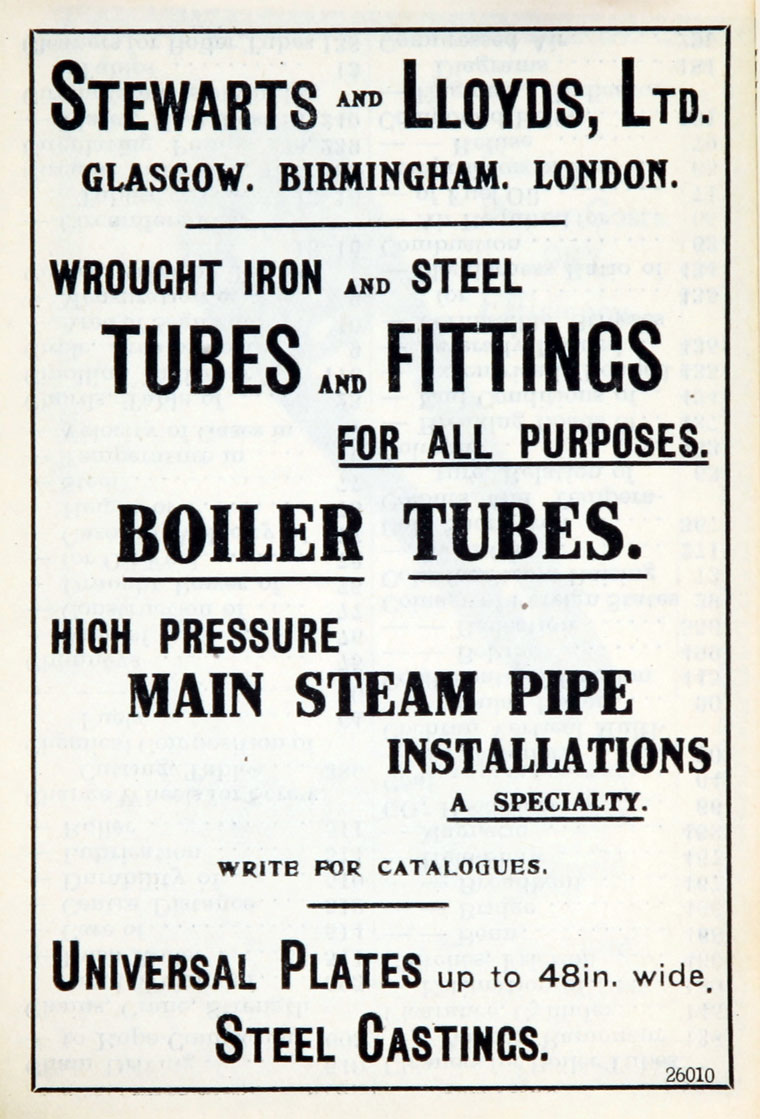 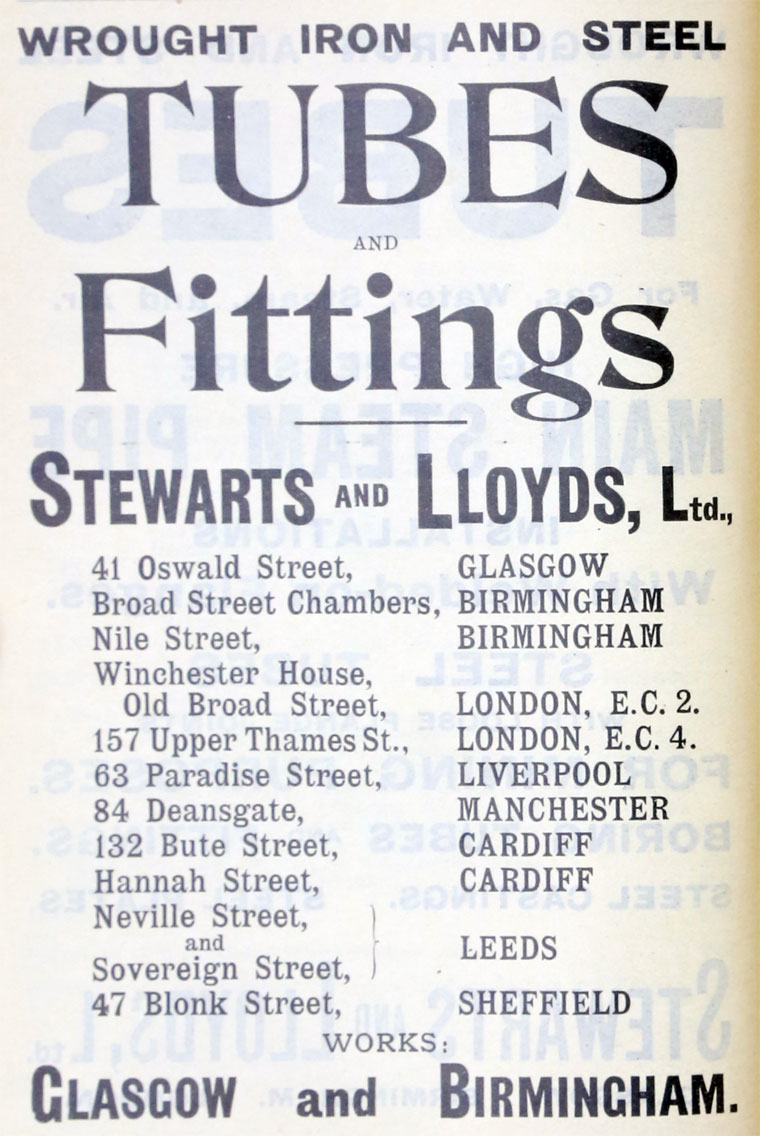 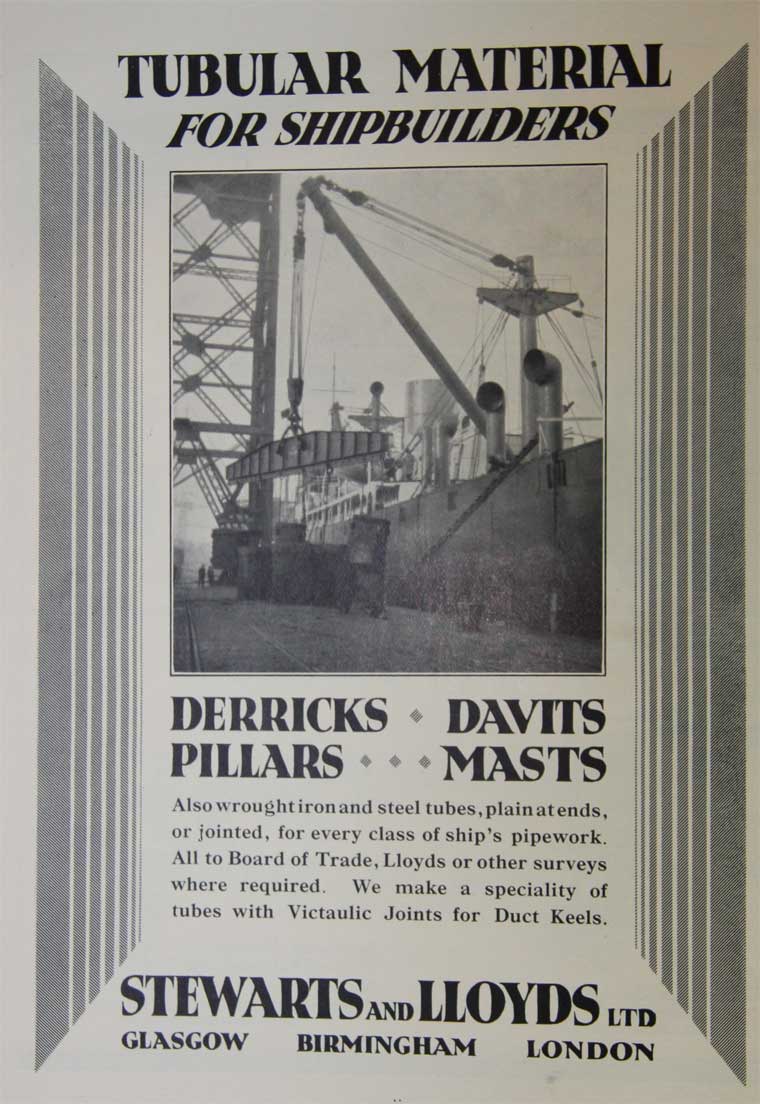 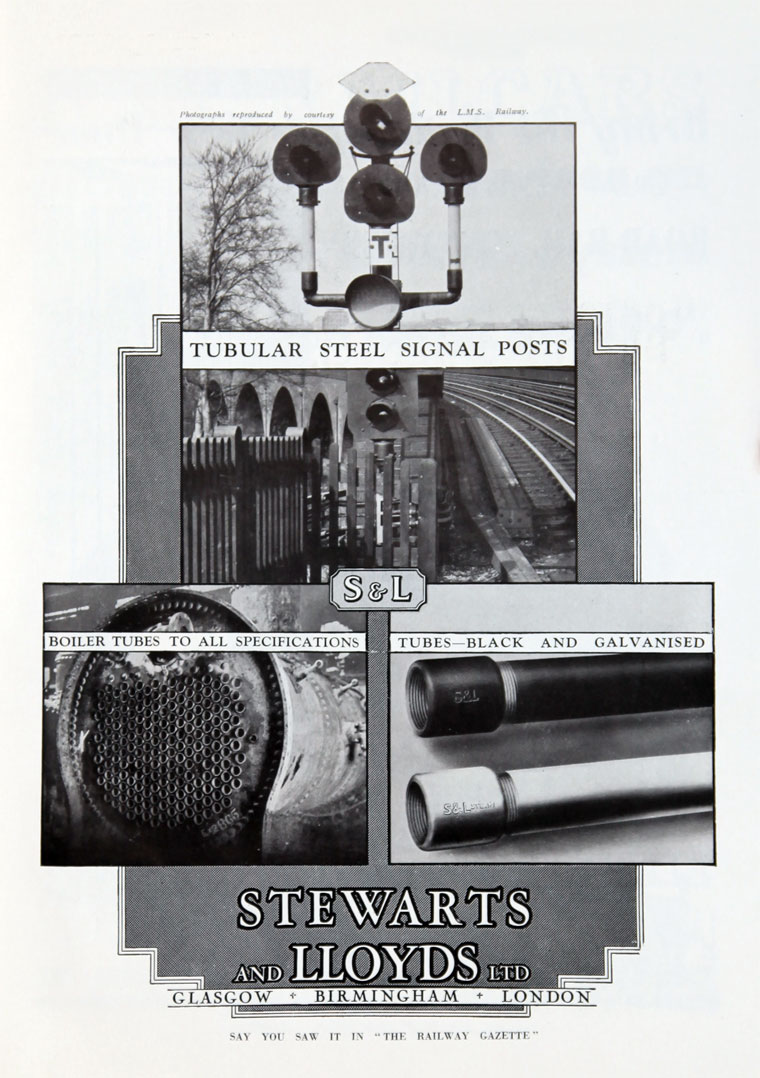 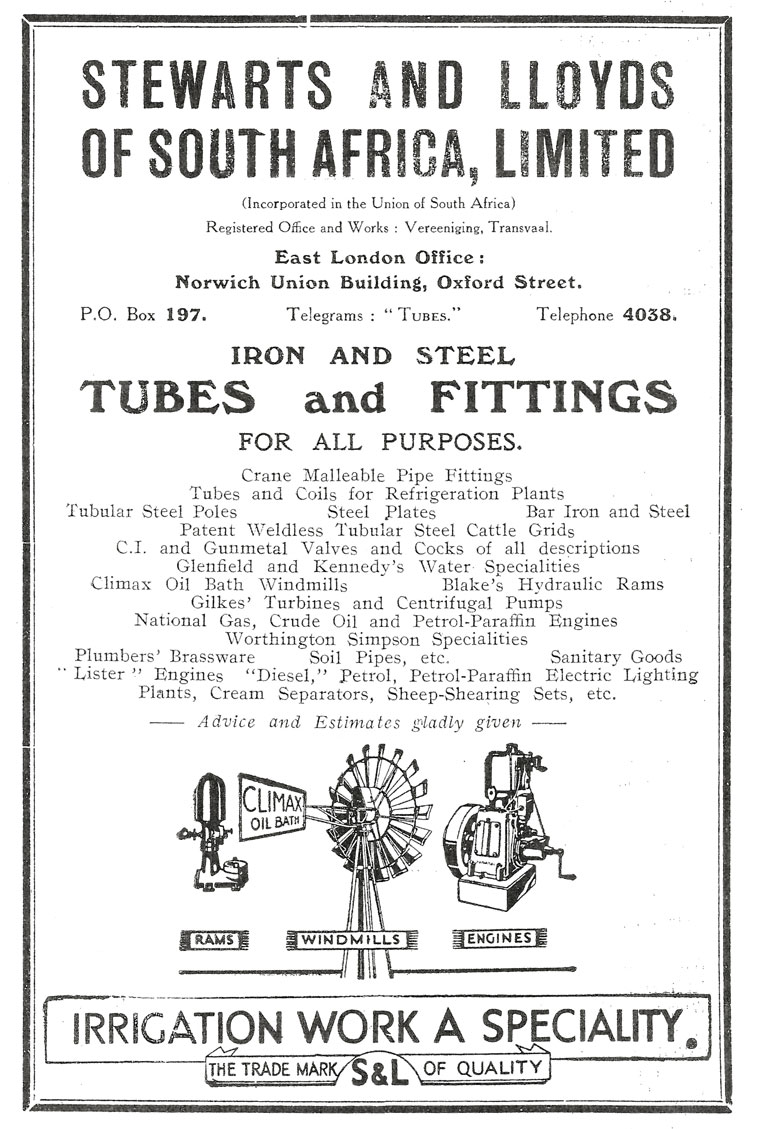 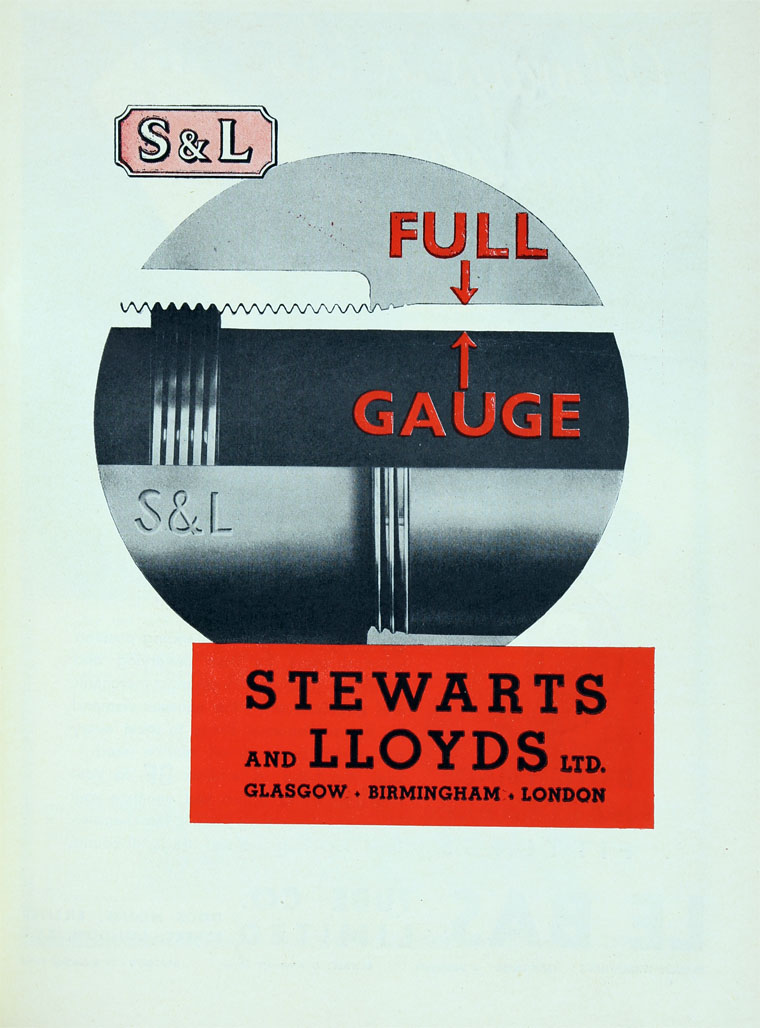 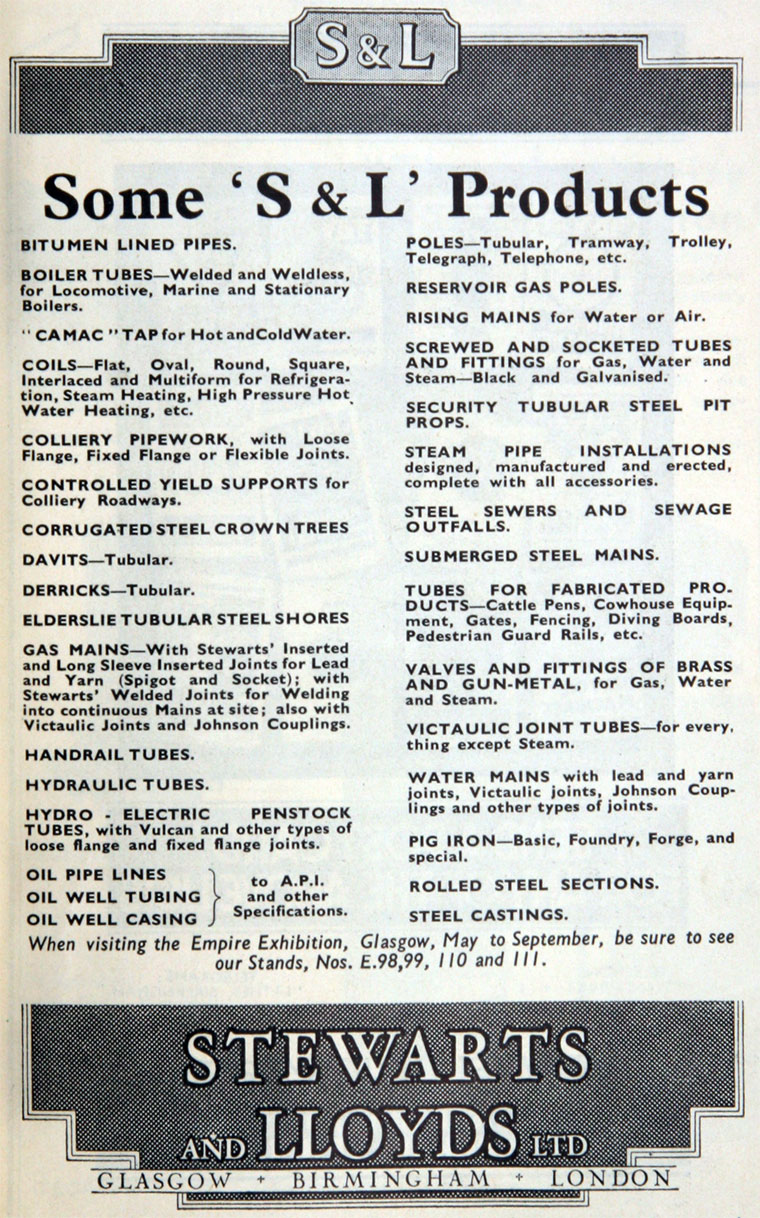 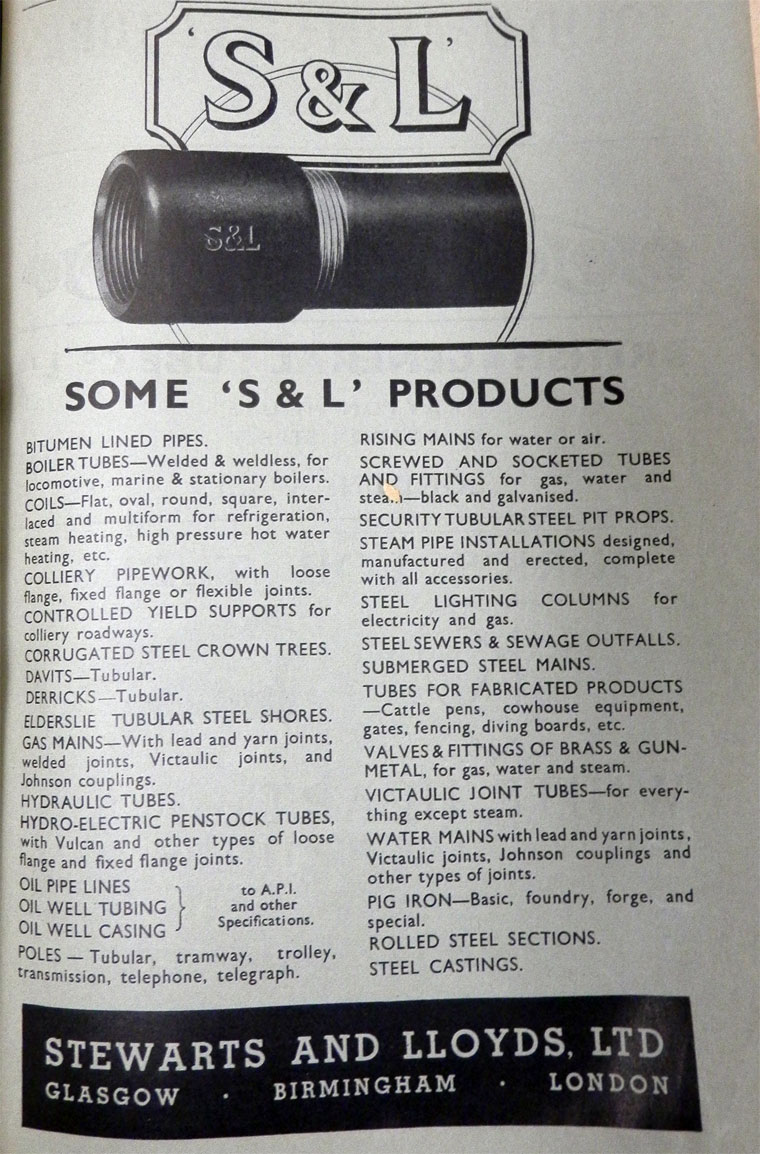 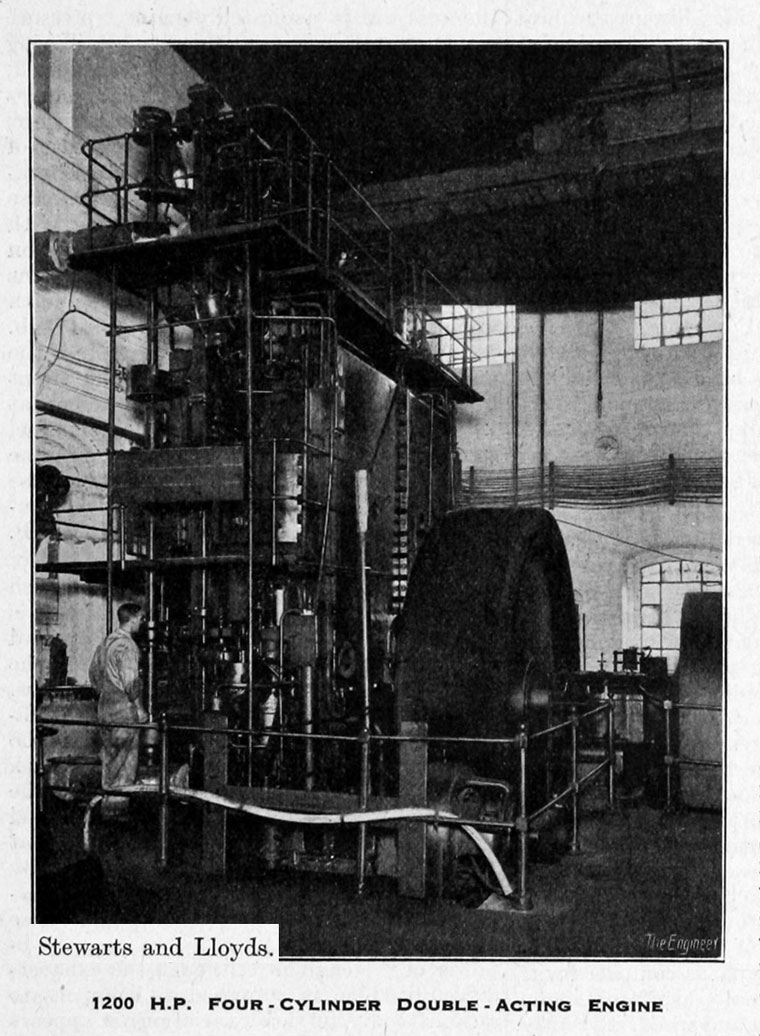 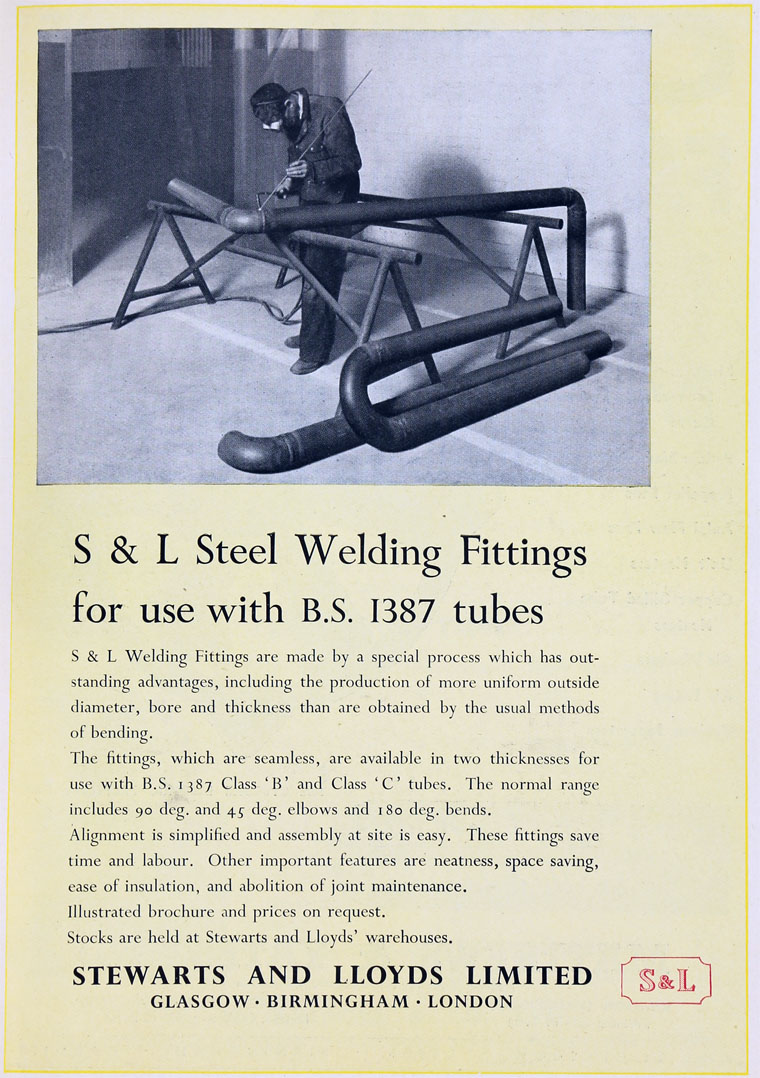 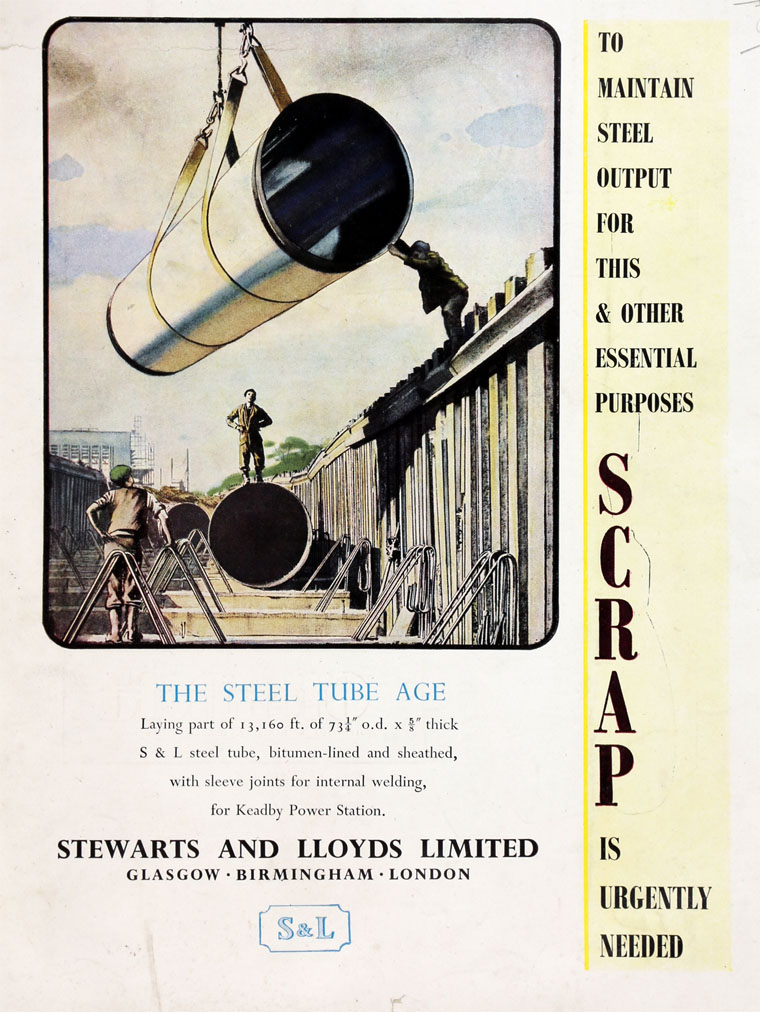 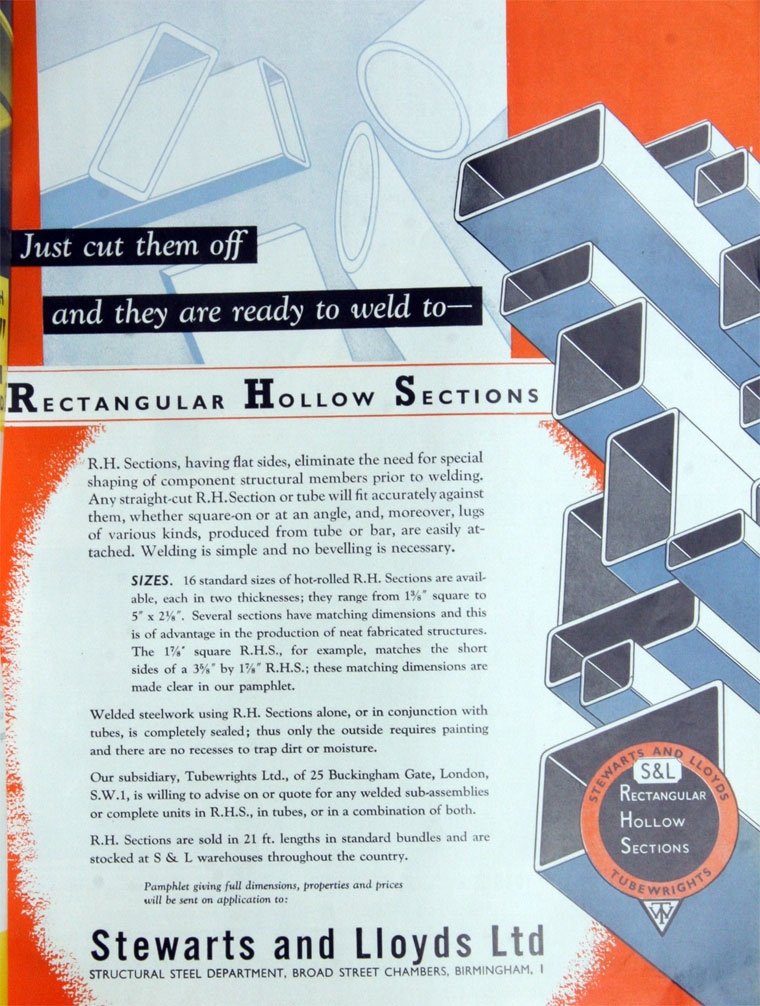 Tropenas Converter used at the Sun Foundry in Coatbridge. Exhibit at the Summerlee Museum of Industrial Life. 1903 January 1st. A. and J. Stewart and Menzies merged with its English counterparts Lloyd and Lloyd to become Stewarts and Lloyds[1]

1903 The huge works of Stewarts and Lloyds at Coombs Wood occupied an area of forty acres, and this was where some 2,000 of their total of 8,000 employees were engaged.

1908 The company became colliery owners when they acquired the control of Robert Addie and Sons Collieries although this interest was sold in 1924.

Before the outbreak of WWI the company bought the British Welding Co of Motherwell, manufacturers of hydraulic welded tubes and established a new works at Tollcross, Glasgow.

1911 Issued catalogue for steel pipes and accessories for gas, water and air mains. [2]

1913 'One man was killed and four others wore injured at Messrs. Stewarts and Lloyds' steel works at Mossend, near Glasgow, through the bursting of a flywheel.'[3]

1917 Installed an engine from Cole, Marchent and Morley.

Following the end of the war, the company gained control of the North Lincolnshire Iron Co, followed shortly afterwards by Alfred Hickman, steel makers, Bilston, Midlothian and their subsidiaries.

1919 Advert for steel pipes. Of Glasgow, Birmingham and London. [5]

1920s Gained control of the Victaulic Co the producers of “Victaulic” joints and Johnson couplings for pipelines, the Prothero Steel Tube Co and then the Birmingham steelworks of John Russell and Co.

1923 Gained control of Kilnhurst Colliery in the South Yorkshire coalfield, although this was sub-leased to the Sheffield steelmakers John Brown and Co. This interest was sold, along with its adjoining brick works, to the Tinsley Park Colliery Co of Sheffield in 1936.

1926 The firm's Mossend Works were reopened in December.[6]

1930 Two large tube makers Stewarts and Lloyds and Tube Investments entered into an agreement to reduce duplication[7]. Although this was to “facilitate exchange of information and technology” it resulted in Stewarts and Lloyds gaining a half interest in the Bromford Tube Co of Erdington, Birmingham and then acquiring the other half in 1945; and in Howell and Co Sheffield, this being given up in 1938.

1932 The company moved to Corby, Northamptonshire, in November 1932, enabling them to make use of the local iron ore to feed their blast furnaces and Bessemer steel converters. The new plant was constructed to a very tight timetable, from the clearing of the site in 1933 the first of the Corby blast furnaces was lit in May the following year. This was followed by coke from the new coke ovens the following month and the ore preparation and sinter plants in September. No.2 blast furnace was lit in November and the first steel came from the Bessemer converters on 27 December. The last of the originally planned blast furnaces (No.3) was lit in October 1935. Following a rebuild to increase capacity of No.2 furnace Corby works became the third cheapest pig iron producing plant in the world.

1936 Looking for greater capacity a fourth blast furnace, a second sinter plant, a new Bessemer plant and new coking capacity, six new ovens being added to the existing battery and a new battery of 21 ovens, were constructed and in operation by the end of 1937.

c.1937 Acquired James Russell and Sons, which was amalgamated with the Scottish Tube Co and a few other smaller purchases, as a move towards rationalization and concentration of the tube manufacturing industry[11]

1941 To add to steel production two electric arc furnaces were built. The ingots cast from the electric furnace were of a different shape and size to any others and were shipped to Bilston for further processing.

1945 Had a plant in Nile Street, Birmingham to produce steel tubes. Also had a factory at Bromford, Erdington (Bromford Tube Co).

1953 The Glebe coke ovens were extended to their maximum number of 141 and plans for No. 6 coke oven battery were formulated shortly after. These were to be built on old quarry workings to the north of the Open-Hearth building and enough land was levelled to accommodate a complete blast furnace plant as well as for the coke ovens by-products plant and gasholder.

By 1953, the company, making use of its original 8 work sites, became the main producer of steel tubes in Scotland producing around 250,000 tons of tubing, the bulk of which were used at the Corby site.

1960 The Staveley Iron and Chemical Co was sold by the Holding and Realization Agency to Stewarts and Lloyds Ltd for six million pounds[16] and merged with Stanton Iron Works Co to form Stanton and Staveley.

1960 In an attempt to make the Bessemer plant more efficient it was trialled with a blast enriched with oxygen, but when a Basic oxygen steel-making test plant was built in 1960, a major change in steel production at the works was signalled.

1961 No. 6 battery of 51 ovens was commissioned but after the footings were installed for the blast furnace, the rest of the construction was put "temporarily on hold", work was never continued.

1963 Bid for Whitehead Iron and Steel Co of Newport, in order to integrate that independent reroller with its own operations, saying that Whiteheads imported half of its steel from Canada[18]. This attracted a competing bid from the state-owned Richard Thomas and Baldwins.

1965 Trials were conducted using the LD (Linz-Donawitz) process and in 1965, with a three vessel plant coming on stream the Bessemer plant closed, having produced almost 18 million tons of steel since 1934.

1967 The end of Stewarts and Lloyds came when the steel industry was nationalised for the second time and they became part of British Steel.

1979 In a rationalisation of the steel industry Corby works was set to close in November 1979. This was delayed until 21 May 1980, due to a national dispute with the Engineering Unions, when the last coil came off the mill. Only the Electric Arc Furnaces, which were part of the Speciality Steel Division of British Steel Corporation, continued, but only to the end of the year. In nearly 40 year of production they had produced almost 2.5 million tons of steel. [20]