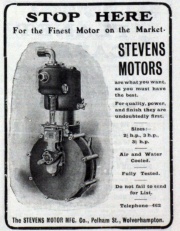 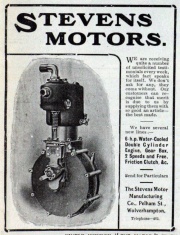 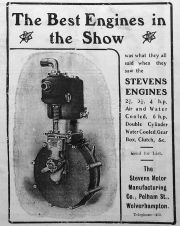 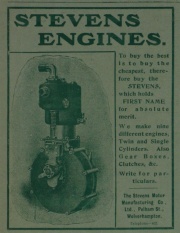 The four Stevens brothers - Harry Stevens, George Stevens, Albert John Stevens and Joseph Stevens, Junior - were closely involved with the transport and motor industries. For a brief history of their involvement in motorcycles history, see below.

1899 When the business was started, the brothers needed cash to finance the new project. Initially three of the brothers, George, Joe junior and Jack, continued with their jobs until Harry could get the business established and it could afford to support them.

The Stevens brothers' first motorcycle: Harry soon became interested in powered transport and fitted an old Mitchell engine to a BSA bicycle that had been lying around the works. The engine was inclined forwards and mounted to the frame. A large metal rim was fitted to the back wheel, a leather belt was wrapped around it, and around a pulley on the engine. Apart from the unreliability of the engine the machine was a great success. It was admired by many people including William Clarke who ran the Wearwell Cycle Co.

William Clarke was also interested in producing powered vehicles and on 26th October 1899 he set up the Wearwell Motor Carriage Co to produce vehicles at premises in Pountney Street. Wearwell produced a 4-wheeled, powered vehicle which had two Butler 2.25hp engines, mounted side by side.

In 1899 the Wearwell vehicle was displayed at the National Cycle Show at Crystal Palace but was not generally liked. When Clarke saw the Stevens' machine however, he realised that this was just what he was looking for, as it performed extremely well and, of course, his company already made bicycles. All that would be needed was the engine and a few modifications to a standard machine. He already had links with J. Stevens and Co, as it supplied Wearwell with spokes and screws. An agreement was entered with Stevens and a contract drawn-up. Stevens agreed to supply a minimum number of engines each week, which were fitted to heavy duty bicycles.

1901 The new machine was called the Wearwell-Stevens motor bicycle and first appeared in the spring of 1901. It was fitted with a 2.5 horse power, air cooled, 4 stroke Stevens engine, with automatic inlet valve, and mechanically operated side exhaust valve. The engine was mounted above the front down tube, had accumulator ignition, a surface carburettor, and a twisted leather belt drive to the back wheel. It sold for 42 guineas. The machine was very popular.

1902 An improved version was shown at the 1902 National Cycle Show at Crystal Palace. The improvements included a choice of surface or spray carburettor and modifications to the wheels and frame. Demonstrations were given at the exhibition, the price was reduced to £40, and orders poured in.

In 1903 further changes were made. The rear wheel was now driven by a Lincona vee belt, and the surface carburettors were discontinued in favour of the spray type.

During 1903 the brothers produced the first Stevens motorcycle that was completely designed and built by them. It used all of their own parts and was more substantially built than the Wearwell-Stevens machines. Lily Stevens was the first person to ride the machine on Wolverhampton's roads and became the town's first lady motorcyclist. The machine was not produced commercially and only one was ever made.

1903 saw the introduction of the Motette powered tricycle. It was a modified version of the 2.5 horse power bicycle. The front wheel was replaced with a two wheeled axle, onto which an upholstered wicker seat was attached. The machine sold for 53 guineas, and a conversion for two wheeled machines was available for £16.5s.0d. Unfortunately both of these products proved to be unpopular.

Stevens' engines continued to sell extremely well and a wide range of new models was available. The company was quickly outgrowing the Tempest Street premises and so in February 1904, both of the Stevens companies moved to Fort Works, at the end of Pelham Street.

1904 After the move to Pelham Street both of the Stevens companies joined together to form the Stevens Motor Manufacturing Company Ltd. The new company was registered on 10th December 1904 with a maximum share capital of £5,000. Also in 1904 Wearwell launched a range of more substantially built models under the the name of Wolf. These were fitted with Stevens air and water cooled engines, and could be supplied with a clutch. The engine was vertically mounted near the bottom bracket.

1905 All went well until the summer of 1905 when a slump in the motor industry led to a fall in sales. This continued for some time and it became essential to safeguard the screw and rivet part of the business from the vagaries of engine sales. This was achieved by the formation of the Stevens Screw Co Ltd in 1906. At this time the brothers designed and developed a new range of engines in readiness for the end of the depression.

The new products ranged from a 4 hp. single cylinder, water or air cooled engine, several 2 cylinder engines from 6 hp. to 10 hp. and two 4 cylinder engines. These were water cooled and rated at 16 hp. and 18 hp.

Luckily Wearwell sales were still going strong and the range of Wolf machines was increased. The engines in the new range of motorcycles included 2.5h.p., 3.25h.p. or 4h.p. single cylinder, a 3 hp. V-twin, a 4.5 hp. and 5 hp. vertical twin. Harry also designed a new type of cork inserted clutch which was available as an extra. The machines sold from 37 to 42 guineas. New versions of the Motette were also produced. These were available as passenger and commercial types. The lighter machines used 4.5h.p. or 5h.p. water cooled vertical twin engines, with a 2 speed gearbox and clutch. They sold for 75 guineas. The heavier versions were built like a car with a steering wheel and body. They used a 7h.p. or 8 hp. water cooled, vertical twin engine, a 3 speed gearbox with clutch, and sold for 100 or 105 guineas.

1907 Wearwell motor bicycles still sold well, but all of this was not enough to keep the engine business going. The company had several debtors including BSA. A receiver was appointed on 17th March 1907, and the brothers took other jobs to make ends meet.

1908 Things improved in 1908 when Clyno of Thrapston, Northamtonshire started to produce motorcycles using Stevens engines. Right from the start they sold well and a brighter future seemed in sight.

Joe Stevens senior found new premises for the Stevens Screw Company Limited in Retreat Street. The company was run by Joe senior and two of his daughters, Lily and Daisy.

1909 Disaster struck when it was discovered that Wearwell's Company Secretary, Mr. King, had been using the company's money to gamble at pool in a local public house. A large sum of money had disappeared, which led to Wearwell going into liquidation. Mr. King tried to commit suicide, but William Clarke did not bring any criminal charges against him, because he discovered that one of his brothers was also involved. This came as a shock to the Stevens brothers as it abruptly ended their association with Wearwell. Luckily, as Wearwell had paid them weekly they had not lost any money as a result of this tragedy.

The brothers also acquired freehold premises in Retreat Street, on the opposite side of the street to the Stevens Screw Company's works. They decided to produce their own motorcycles under the AJS name which came from Jack Steven's initials. Jack's initials were chosen as he was the only one of the brothers to have two Christian names, which were Albert and John.

1909 The brothers set up a new company called A. J. Stevens & Company Limited on 14th November 1909. The Directors were Harry, Joe junior, Jack and George. They started with a share capital of £1000.

1897 The brothers built their first machine, powered by an American Mitchell engine mounted on the down-tube of a bicycle, with the petrol tank hung from the cross bar. The belt-driven rear wheel had a jockey pulley for tension, to reduce belt slip. Albert John Stevens (AJS) built his first internal combustion engine in 1897, although it did not go into commercial production until after 1900.

They then turned to building engines for Wearwell.

1903 A solo was built, with a 2.5hp engine in an open frame that was suitable for their sisters to ride.

1905 Stevens built a bike with a JAP V-twin, with leading-link front forks and a swinging fork at rear. The brothers had also been producing frames.

1909 The AJS company was founded by the Stevens brothers.

1931 Failure of AJS and the sale of that marque to Matchless.

1934 The Stevens returned to motorcycle production with a model fitted with a 249cc overhead-valve engine, Burman four-speed gearbox, duplex frame and Druid forks.

1935 That model was joined by a 348cc version, and later in the year came one of 595cc with an engine that had hairpin valve-springs and the oil tank located under the saddle.

1936 The two larger models had a megaphone-shaped silencer and the two smaller ones had the oil tank located under the saddle. Competition versions were also available.

1938 The final year of production as wartime brought an end to motorcycles and the brothers' interests turned to other things.