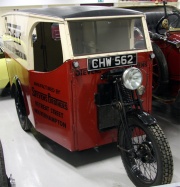 They still owned their old Retreat Street premises, which in the intervening years had been used by the Stevens Screw Company Limited.

1932 Working on a shoestring they set up a new company called Stevens Brothers (Wolverhampton) Limited, in May 1932. The directors were the five Stevens brothers: Harry, George, Jack and Joe and Billie. Working around the clock, and assisted by a number of unpaid volunteers, they managed to design and develop the Stevens Light Commercial Vehicle, a three-wheeled van based on a prototype built in 1921 at the AJS works on Graiseley Hill, which had two wheels at the front and one at the rear. The Stevens van used motorcycle technology, with a single wheel at the front, carried on heavy duty motorcycle forks.

From late 1932 the vans were also built in London by Bowden (Engineers) Ltd., who had a manufacturing agreement with Stevens.

The vans sold quite well, and another building in Retreat Street was rented so that production could be increased. The vans were assembled in batches of six. When one batch was sold, work could begin on the next. Because the company was run on a shoestring, everything had to be finished by hand. Up-to-date machinery, such as that which had been used at Graiseley Hill, was unaffordable.

1934 Joe and Jack left to start their own company, Wolverhampton Auto-Machinists Limited, which carried out jig-boring, and produced jigs, and fixtures for the engineering trade.

1934 March: The 3 Stevens brothers returned to motorcycle production with a model designed by Harry Stevens, which was fitted with a 249cc overhead-valve engine, Burman four-speed gearbox, duplex frame and Druid forks.

1935 That model was joined by a 348cc version and, later in the year, by a 595cc with an engine that had hairpin valve-springs and the oil tank located under the saddle.

1936 The two larger motorcycles had a megaphone-shaped silencer, and the two smaller ones had the oil tank located under the saddle. Competition versions were also produced to attract sales.

WWII Stevens Brothers manufactured and machined components for most of the leading aircraft companies, including Bristol and Fairey Aviation, Avro, Handley Page. They were sole manufacturers of the torpedo depth-setting gear fitted to every Fairey Swordfish torpedo bomber. At the time Stevens Brothers were much sought after to take on jobs that other businesses could not, or would not do.

Early 1950s: Employed over 70 staff. Production consisted of hundreds of different small parts including bolts, nuts and screws, in ferrous and non-ferrous metals made from bar.

Jim Stevens took the decision to sell Stevens Brothers (Wolverhampton) Limited. By this time his father and uncles had died, and the sale would allow him to concentrate on the running of the Stevens Screw Co.

Stevens Brothers was acquired by Leo Davenport, a successful businessman, who had previously been a successful competition rider for AJS.

1973 Wolverhampton Council served a Compulsory Purchase Order on the factory. Moved to share premises with what had been the family's other business across the road.

Two other businesses were run from the Retreat Street premises. The first, Jones and Goodare was owned by the Stevens Screw Company; the second, Lombard Products (Midlands) Limited was owned by Leo Davenport.

1992 The factory was acquired by Engines Limited, and later W. Hopcraft and Son Limited, monumental masons.