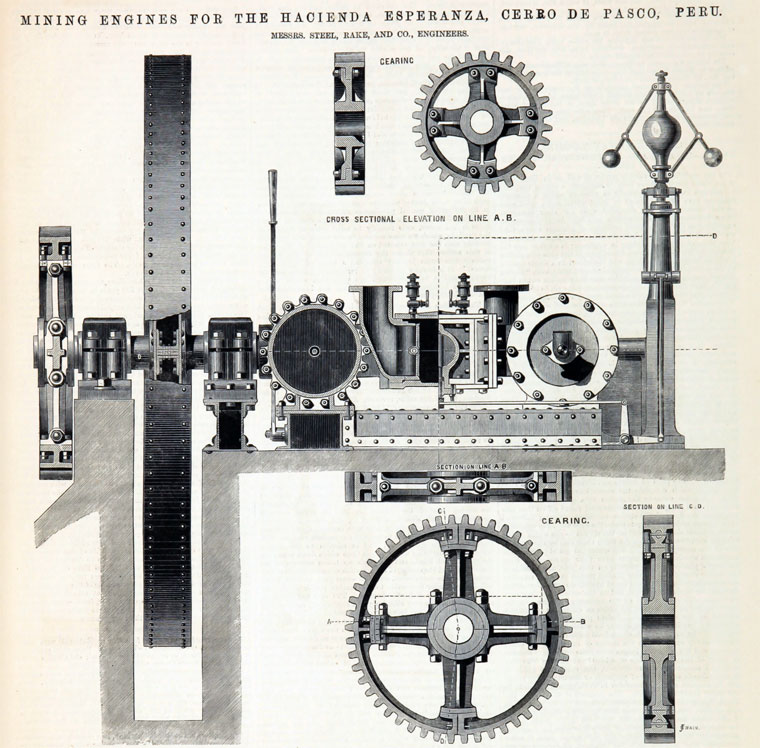 1869.Constructed by Messrs.Kitson and Co

of Newport and Swansea

1868 Designed steam plant for a silver mine at Cerro de Pasco, Peru. The engine was made by Kitson and Co and had two cylinders of 15" bore, 2 ft 6" stroke. 40 HP nominal, capable of 80 HP. The two boilers by Galloways. The equipment was to be installed at an elevation of 14,000 ft, at which height water boils at 186 degF. The weight of individual parts was limited to 275lb, as they had to be carried on mules' backs over a distance of 150 miles from Lima.[1]. See below for more information.

1870 ' NEWPORT. Engineering. - We observe that an engineer of the South Wales district, Mr. T. Dyne Steel, of the firm of Steel, Rake, and Co., has been the successful competitor in the design for the new bridge, proposed to be erected over the river Aire at Leeds. .....' [2]

1874 'NOTICE IS HEREBY GIVEN, That the Partnership heretofore subsisting between us the undersigned THOMAS DYNE STEEL, and HERBERT RAKE, as Mechanical Engineers, carrying on business at Newport, in the County of Monmouth, and Swansea, in the County of Glamorgan, under the style or firm of STEEL, RAKE & Co. was on, and from the Thirtieth day of DECEMBER, One Thousand Eight Hundred and Seventy Three, dissolved by mutual consent, and that the business at Newport, aforesaid, will in future be carried on at Newport by the undersigned Thomas Dyne Steel, and the business at Swansea, aforesaid, by the undersigned Herbert Rake. ....' [4]

'ENGINES FOR THE HACIENDA ESPERANZA.
These engines are intended to drive the machinery used for grinding the silver ore dug from the mines at Cerro de Pasco. The grinding is done by twelve immense edge runners of granite 10ft. diameter 18in. thick. These are quarried at a distance of three leagues, and rolled to the Hacienda by yokes of bulls, as many as thirty yokes being sometimes employed.

'The engines now illustrated are to replace an upright beam engine, constructed several years ago by Messrs. Blyth, of Greenwich. They are horizontal high-pressure engines, cylinders, 15 in. diameter, stroke, 2ft. 6in., and are intended to make forty-four revolutions per minute in full work. A greater speed of piston might have been adopted with advantage in this country, but in the district referred to skilled labour ia scarce, and a speed of piston was fixed upon most conducive to economy in wear and tear and repairs. The engines after arriving in Lima will have to be transported to their destination on the backs of mules a distance of fifty-five leagues, over the range of the Andes at an elevation of 18,000ft. Cerro de Pasco being 14,600ft. above the sea level on the eastern slope of the Cordillera, the difficulties of the route may be imagined. It, therefore, became necessary to build the engines in parts, no single piece to exceed 275 lb., which is a mule load, and as many parts as possible in 150 lb. parcels. A mule can carry two parcels of 150 lb. slung on either side with greater ease than one single parcel of 275 lb.

'The engine bed or frame is of wrought iron, the top plate 1/2 in. thick, the sides formed of channel iron 2 1/2 in. by 3/8 in. flanges, 1/2 in. web by 6 in. deep, and the bottom plate 1/4 in. thick. The frame will be rivetted up for trial here, and afterwards taken apart so as to conform to the above conditions of weight. The cylinders are built in three parts bored in one, the method of jointing being shown on the sectional plan. Eighteen bolts hold the parts together. Bolt holes are reamered out, and bolts turned in. A little tallow is the only material usrd to make a steam-tight joint.

'The engines are fitted with link motion, as it is necessary to reverse the engines occasionally. A stay runs from the cylinders to the plummer blocks; to prevent any tendency to spring it is made in two pieces and fixed to the engine-bed in the centre by a bracket, into which the ends are cottared. The fly wheel shaft is made in two parts, with a flange forged on each for forming the joint, in conjunction with the boss of the fly wheel. The two parts of the shaft and fly wheel are bolted together by eight l 1/2 in. bolts, accurately fitted, as shown on the end elevation.

'The fly-wheel is made of wrought iron, excepting the boss; the rim is nearly square, like a box-girder. Channel iron for the inner side, angle iron sides, and outside plate, of 1/4 in . iron. Each of the segments is fitted in a true circle and jointed together, and to the arms, as shown on the different sections. The segments are rivetted up complete, with the exception of the outside plate, which will be rivetted on at its destination. The hollow part of the fly-wheel rim will be filled with lead to make weight, that material being almost a drug at Cerro de Pasco. The end of the fly wheel shaft is carried on a wrought iron girder, and the other end is supported by the wall of the engine-house, and connected to the crank shaft by means of drag link.

'The pitch of the gearing is 2 3/4 in., diameter of the driving wheel 3ft. 8 in., and the pinion 2ft. 2 3/8 in. The rim of the driving wheel is made in two segments, and the arms and boss in two parts, and coupled in the manner shown on the illustrations. The several parts are accurately fitted together, the brackets on the segments and the ends of the arms being turned to fit each other. The segment and arms of the pinion are also turned in the same manner. By this arrangement spare rims can easily be fitted on in case of breakage, and every part brought within the conditions of weight named before. The connecting rods, valve rods, shafts, &c., are made of Bessemer steel ; the line shaft, of which 80ft. is supplied 3 5/8 in. diameter, is of hammered iron.

'The engines will_ be driven by two boilers 20ft. long by 6ft. diameter, w1th two internal flue tubes 2ft. 4in. diameter and four of Galloway's patent conical tubes in each. The boilers are sent out in plates, the plates being interchangeable and made to template, workmen being sent out from this country to put up the boilers and engine.

'The boilers were made by Messrs. Galloway, of Manchester. The engines by Messrs Kitson and Co., of Leeds, and the gearing, shafting, &c., by Messrs Stothert and Pitt, of Bath. The engines were erected complete at the works of the contractors at Leeds, and were worked under steam in a satisfactory manner, superintended by Mr. Dyne Steel, of the firm of Steel, Rake, and Co., on the 4th inst. They were then taken to pieces and forwarded in 132 packages via Liverpool and Callao to their destination.' [5]