Grace's Guide is the leading source of historical information on industry and manufacturing in Britain. This web publication contains 148,347 pages of information and 233,846 images on early companies, their products and the people who designed and built them. 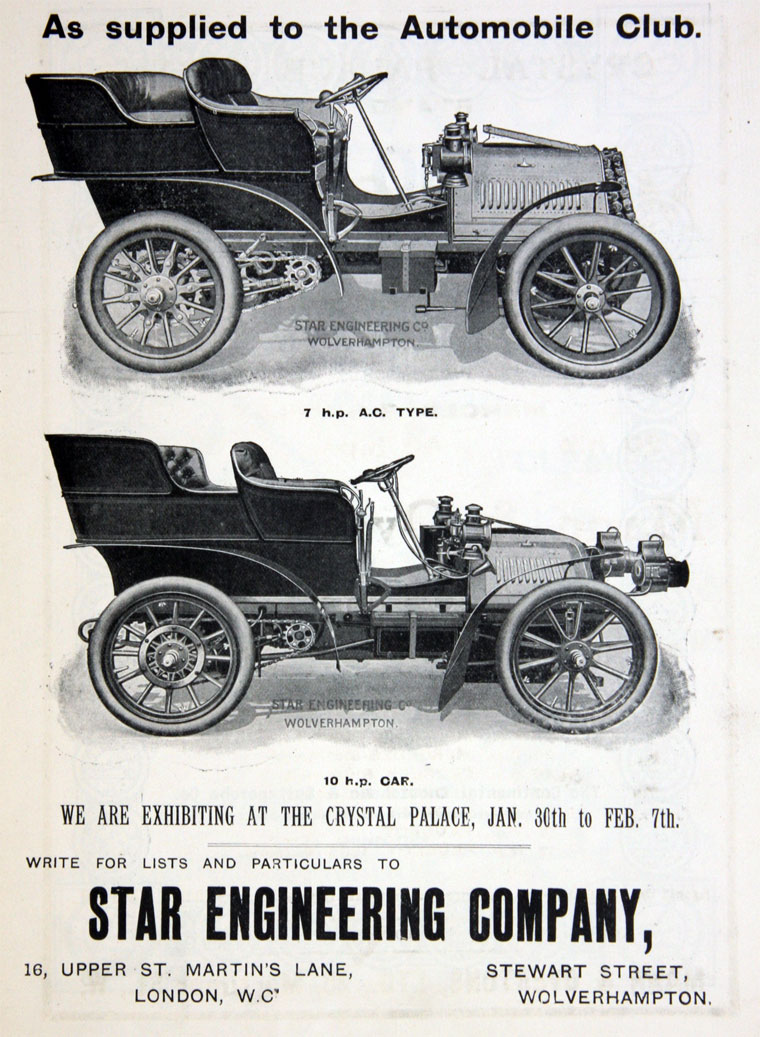 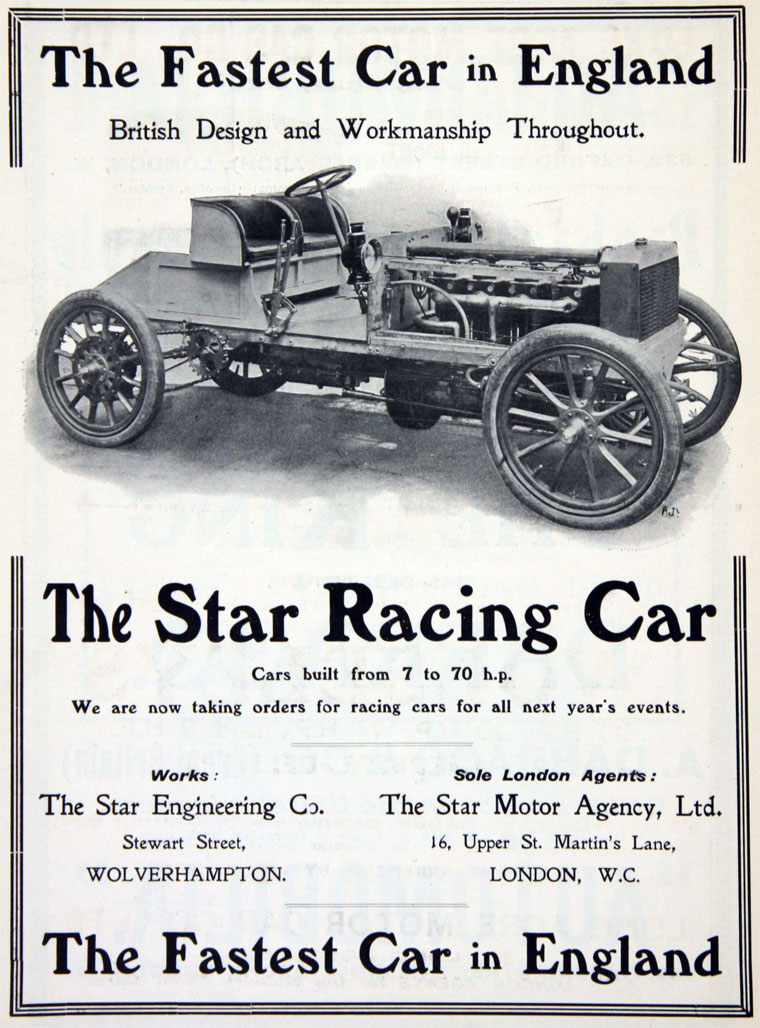 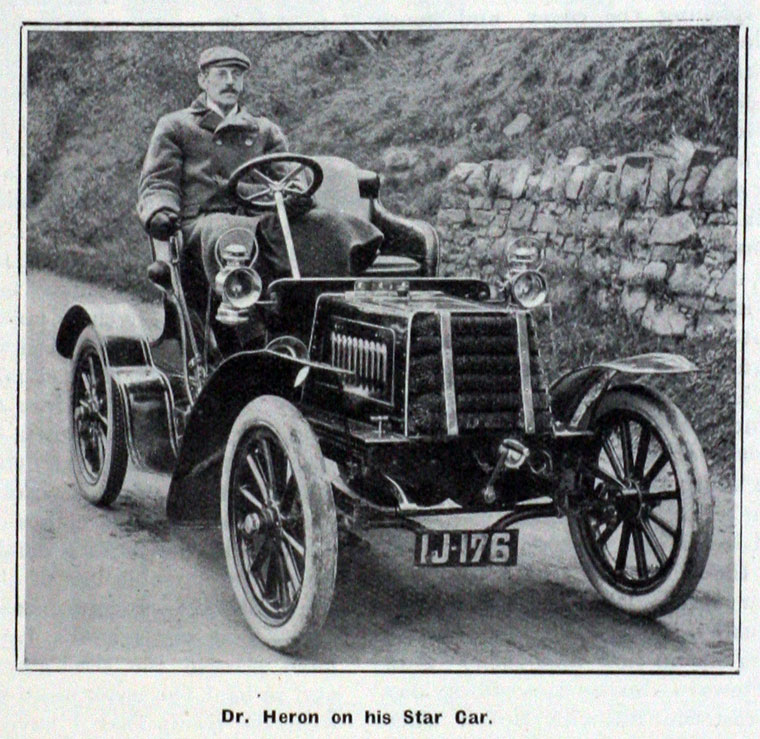 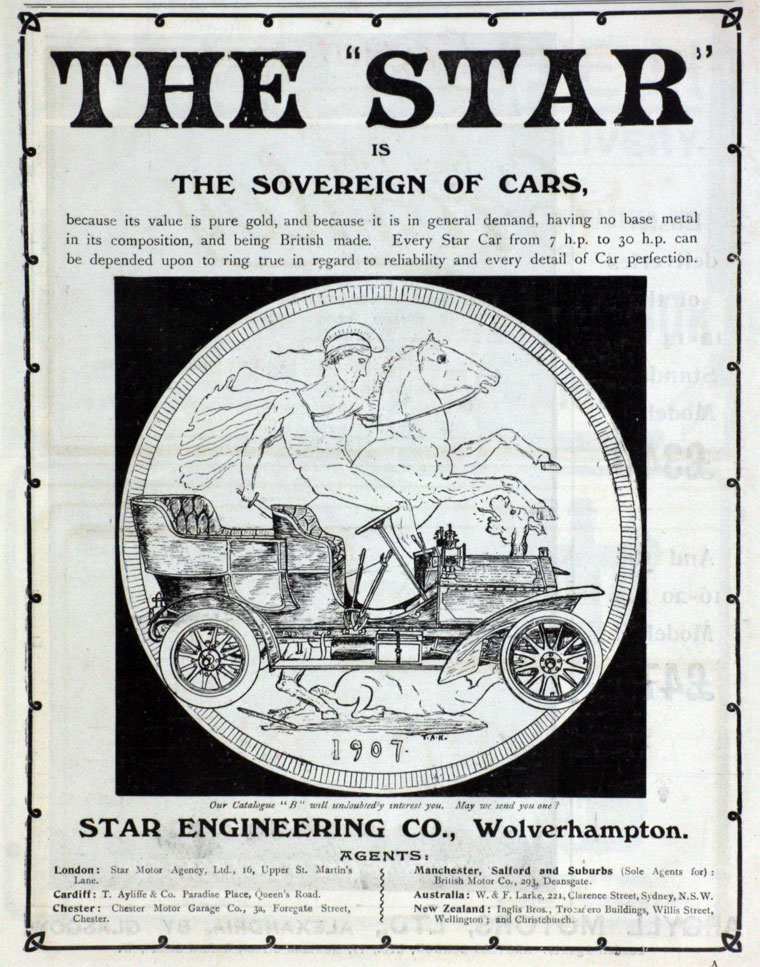 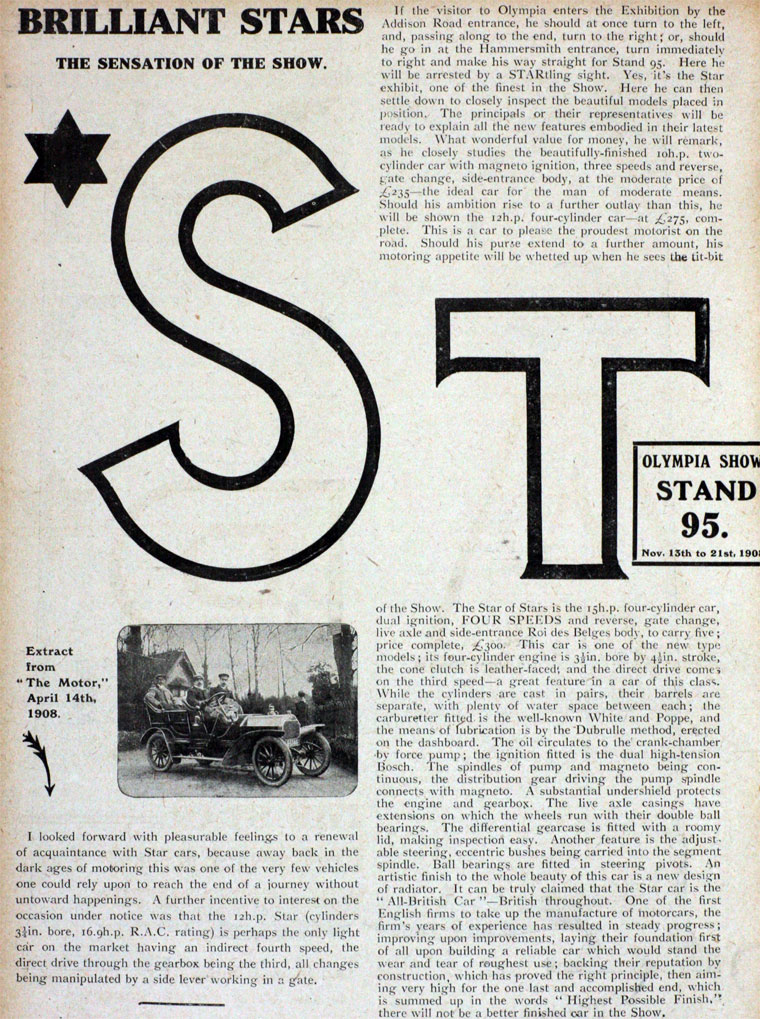 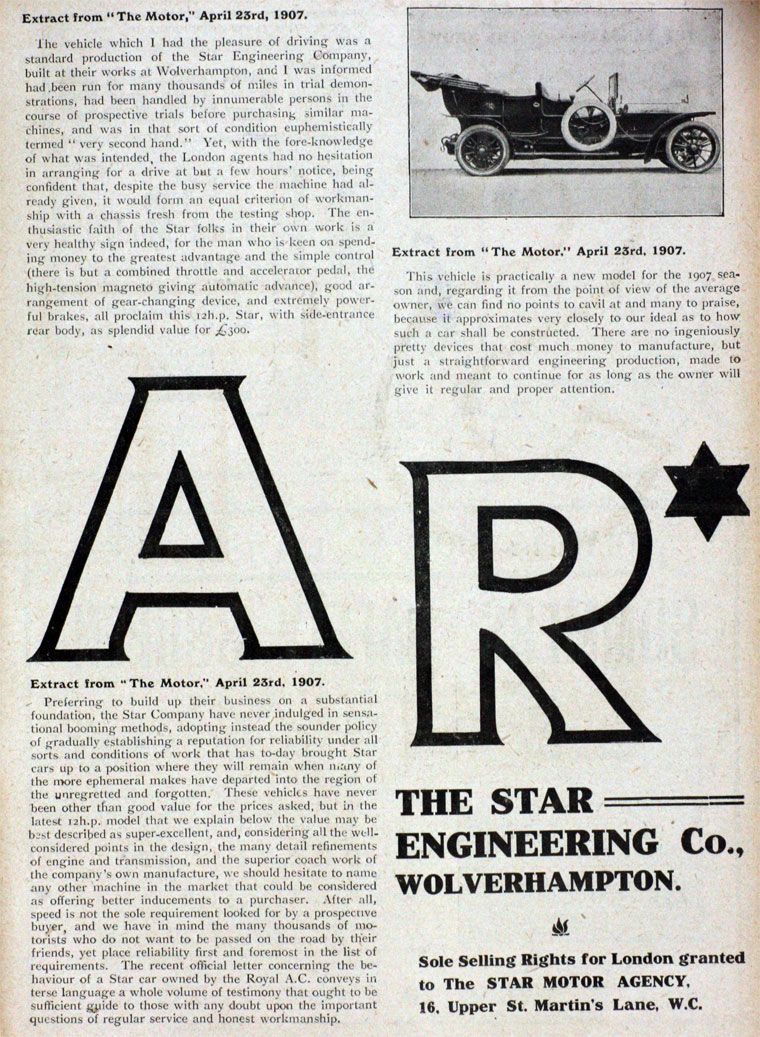 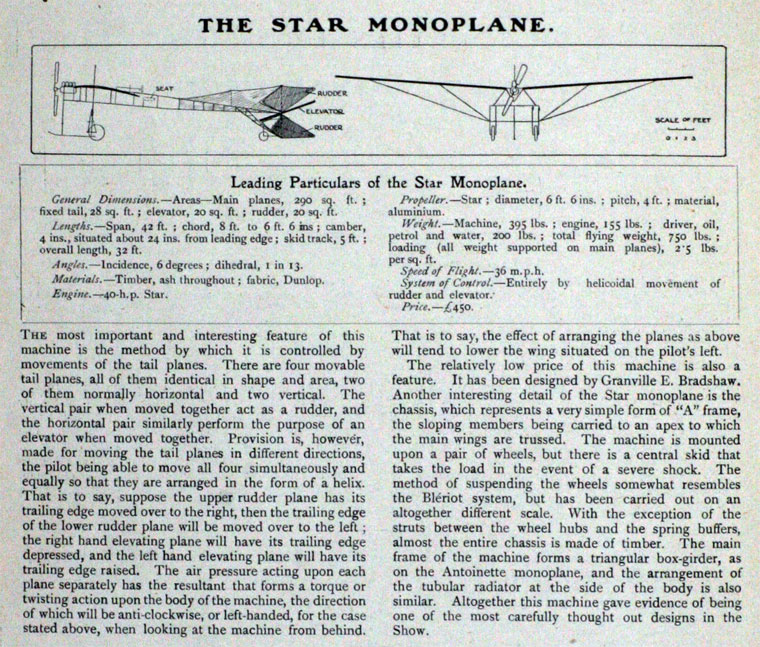 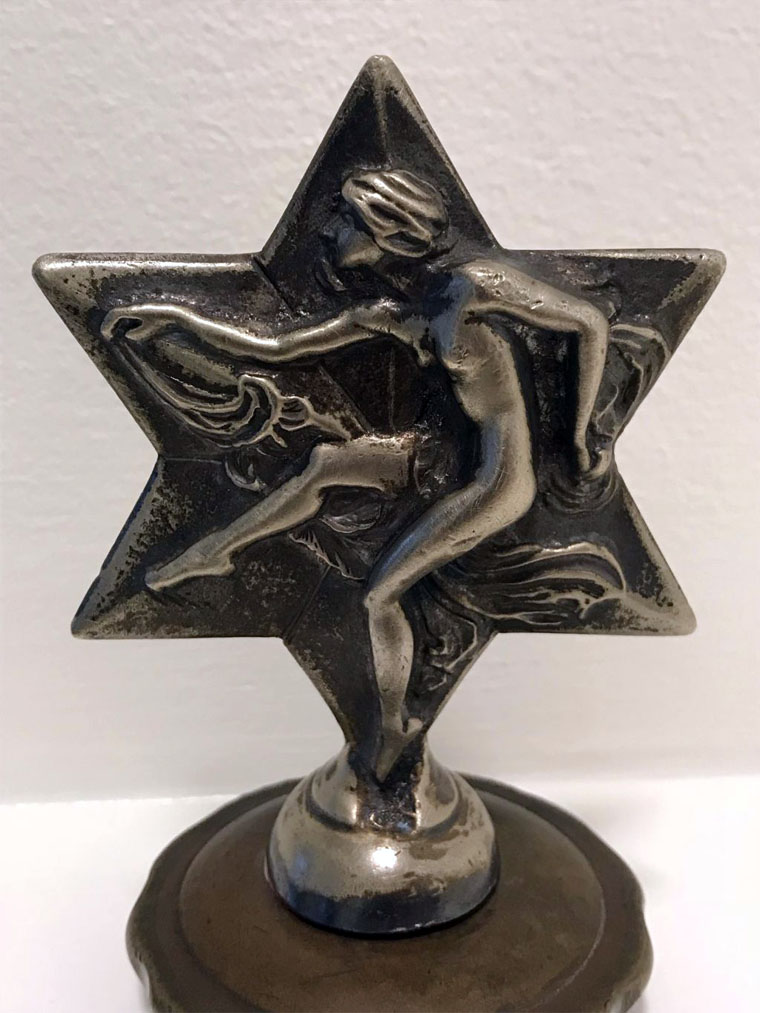 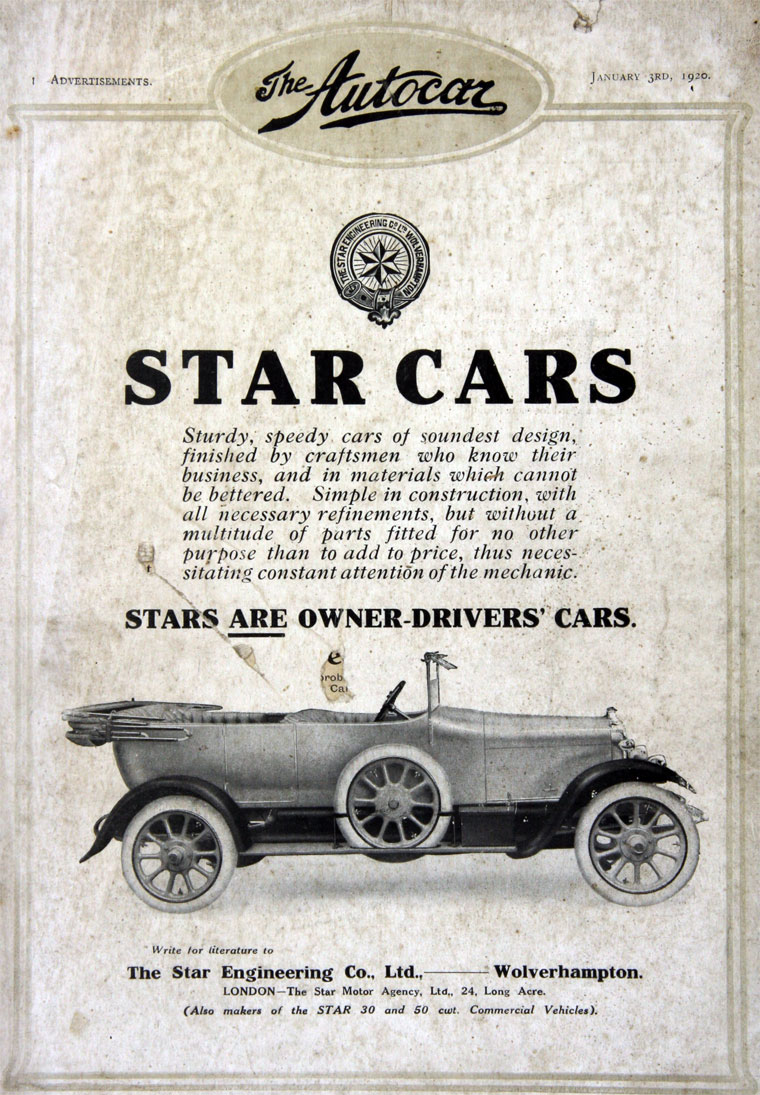 The Star Engineering Company of Wolverhampton produced cars, lorries and motorcycles. Star's foundry was at Frederick Street, where metal castings were made for the company's vehicles.

1902 the Star Motor Company changed its name to The Star Engineering Company. It was a subsidiary of the Star Cycle Co.

1909 The Star Engineering Co, the manufacturer of Star cars, took over its previous parent company The Star Cycle Co and the production of Starlings and Stuarts ceased.

1910 The Star Engineering Company built 2 aircraft. The first was a Farman type biplane with a forward elevator. The second was a monoplane that was powered by a Star 40 h.p., 4-cylinder, water-cooled engine. See Star Aeroplane Co

WWI During the first world war, Star Engineering Ltd, like Sunbeam, stopped production of its motor cars and concentrated on producing commercial vehicles and ammunition.

1919 So successful was the company that by 1919 Star was one of the six largest motorcar manufacturers in Britain. The company operated from a number of small factories located in Dudley Road, Frederick Street, Nelson Street, Stewart Street, Ablow Street and Dobb Street.

Star's customers included the War Office in Britain as well as those in Siam (later Thailand), Greece, Spain and Romania. The company also made a small number of ABC's Dragonfly radial aero engines.

1920s Some goods vehicles with payloads of 15cwt to 2 ton were produced with a four-cylinder side-valve engine of 3,054cc and an overhead-valve engine for the larger models. The aircraft and engine were designed by Granville Bradshaw, who was only 19 years old at the time. The engine delivered 40hp. at 1,450rpm. It had a bore of 100mm and a stroke of 125mm. It weighed 182lbs, with a Simms magneto and a water pump. The company could never compete with mass-produced cars. Production peaked between 1921 and 1925, when Star sold about 1,000 cars a year.

The company mascot was a segmented six-pointed star with a semi-nude female figure embossed on the front - thought to be the Goddess Athena.[2]

1928 Guy Motors approached the shareholders for a controlling interest in the business. [3]. Guy sold Star's factory to the Moxley Foundry and moved production to a new factory in Showell Road, Bushbury, which was nearer to Guy's factory but sales didn't improve.