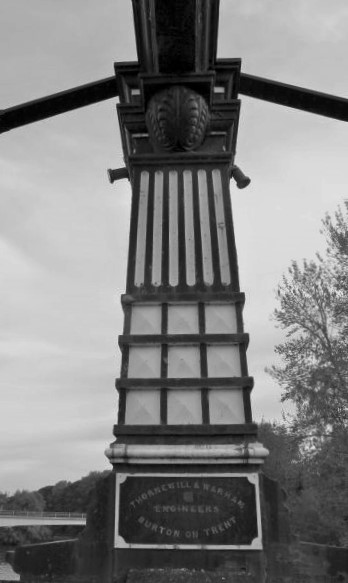 An unusual pedestrian self-anchored suspension bridge over the River Trent, with an associated viaduct taking a busy footpath over flood-prone meadows.

Constructed by local engineering firm Thornewill and Warham, and opened in 1889. The firm were better known for machinery, but they had previously built an iron bridge, Andresey Bridge, opened in 1884.

An interesting account of the bridge and its history is available on the Burton-on-Trent Local History website[1] [2]. We learn that bridge was gifted to the town by Michael Arthur Bass (Baron Bass of Bass and Co) to replace a ferry boat. Edward William Ives had the lead role in designing the bridge, but he used the services of Alfred Andrew Langley of the Midland Railway. The bridge originally sported much more ornamental cast ironwork, but this was quickly removed to reduce weight.

The bridge underwent a £1.3m refurbishment and reopened in 2016.

An unusual, possibly unique feature is the use of 'chains' or 'cables' comprising three plies of wrought iron plate riveted together (Photo 3).

Unusually in British practice is the 'self-anchored suspension' design: the chains, instead of being taken from the towers to anchors in the ground, are terminated by being riveted to the ends of the deck girders. These girders are of the lattice type and extend the full length of the suspension bridge. This type of construction was introduced by the Austrian engineer Josef Langer, who published his proposal in 1859. The first bridge of that type was built at Wrsowicer in 1870, and it has been stated that 'This bridge differs from all the self-anchored suspension bridges built since that time in that the cable is attached to the stiffening girder near the centre of the main span as well as at the ends.'[3] In fact the Stapenhill bridge also has its cable attached to the girder at mid span (see Photo 8). Langer's towers were hinged at the piers, whereas they are solidly fixed at Stapenhill. Charles Bender in the USA patented a self-anchored suspension bridge in 1867, but the first US self-anchored suspension bridge was not opened until 1928. The concept was slow to gain acceptance, and the referenced document gives only two 19th century examples, Stapenhill not being one of them.

The wooden deck is supported by cambered lattice cross girders (Photo 4). Vertical members in the girders are riveted to top and bottom rails and to the cross girders, and connect with the suspension hangers. The hangers themselves are inclined outwards to connect with the chains (the distance between the saddles on the towers being appreciably greater than the width of the deck, the wide spacing conferring greater stability).