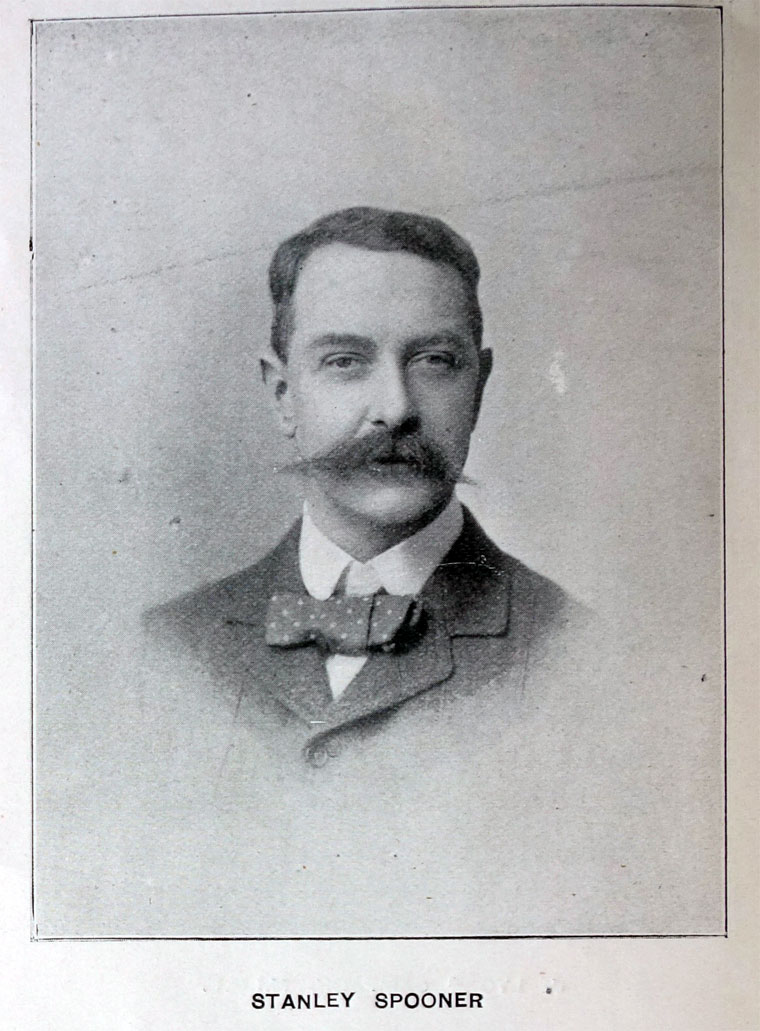 1904 SPOONER, Stanley, 44, St. Martin's Lane, London, W.C. Is editor of The Automotor Journal, which he started in the early days of motoring. Was a convert to the horseless vehicle long before the passing of the Act of 1896, and joined the A.C.G.B. & I. immediately on its inception. Educated in London, France and Germany. Is a very enthusiastic supporter of motoring. [1]

1904 SPENCER, Mrs. Stanley. Is a courageous balloonist and an enthusiastic motorist. "The motor-car is the only possible rival to aeronautics, so far as my affections are concerned," she is fond of telling her friends. [2]

SPOONER, STANLEY.- Born in 1856, and educated at King's College, London, France, and Germany, Mr. Stanley Spooner has taken a keen interest in automobilism long before the Act of 1896 was passed, and appreciating the enormously important industrial future of the movement in 1896, founded the Automotor Journal, of which he has been the responsible editor since its inception.

Starting at a time when the bicycle movement was at its highest tide, and the unscrupulous commercial exploiters of the latter turned their attention to the possibilities of the horseless vehicle, to their own benefit and to the detriment of the investing public, Mr. Spooner has done a great deal in exposing fearlessly in his Journal those abuses under which most things novel and of a promising future have to suffer. From those early days until to-day, whilst recording all news of any value, he has maintained as the vocation of his Journal to deal with the purely technical and manufacturing side of automobilism in an unbiased and unprejudiced spirit. Mr. Stanley Spooner has been a great supporter, and always recognised, in the columns of his Journal, the useful functions of the Club. He has been a member since its formation, and is a well-known figure at all important automobile events.

Most of our readers will have seen from the announcements in the daily Press that on April 3 Mr. Stanley Spooner passed away at University College Hospital, London, in his 85th year. He was buried at Brookwood last Saturday, April 6. He had suffered from thrombosis, and refused to agree to an operation.

With the passing of Mr. Spooner not only have we on the staff of Flight lost a great friend, but the aviation world has had severed one of the few close links with the past — a man who believed in aviation at a time when few shared his views, and who lived to see the vindication of his faith.

When he was in his early forties Mr. Spooner lost all he possessed — through no fault of his own — and had to start life afresh. In 1896 he founded a motoring paper under the cumbersome title "The Automotor Journal and Horseless Vehicle." That, of course, was in the days when a man with a red flag had to walk ahead of motor cars, and the title may have been somewhat necessary. Gradually it was shortened to " Automotor Journal," and finally to the "Auto."

From about 1900 or so, the "Auto" began to take an interest in flying, and for several years it had a regular aviation section, in which were recorded the many schemes for flying and the few actual accomplishments of those days. Mr. Spooner kept in close touch with the Wright Brothers, partly through Griffith Brewer, who was an old friend of his, and with whom, and a few other friends, including the Hon. C. S. Rolls, he founded the Aero Club, now the Royal Aero Club.

By 1908 Mr. Spooner came to the conclusion that the time had come for bringing out a journal devoted exclusively to flying. Great were the arguments about its title, but in the end he, doubtless having learnt his lesson from the original title of the "Auto," decided on a single word, Flight. Among those whom he consulted was Claude Goodman Johnson, who died a few years ago, and who was at that time managing director of Rolls-Royce. We have not the actual letter, but we have seen it, and the wording was approximately as follows: "My dear Stanley, How in the world you can think of wasting your time and your money on a flying paper beats me. Obviously flying can never amount to anything serious."

In spite of such discouragement — and there were many of similar nature — Mr. Spooner stuck to his decision, and backed it with hard cash, and on January 2, 1909, the first issue of Flight appeared as a separate journal and that the first few years of Flight's existence was a struggle may well be imagined.

Most of the aeroplanes built and flown were produced by impecunious experimental enthusiasts, who certainly had no money to spare for supporting by advertising a journal which, they fully realised and willingly conceded, was doing excellent propaganda work, A few there were who were reasonably well capitalised, but the revenue from advertising was almost microscopic during the first few years.

From the very first, Mr. Spooner foresaw the tremendous strides which the aeroplane would make in the matter of speed, range and load-carrying capacity. He was not a technical man, and possibly because of that he refused to be disheartened by the innumerable problems which stood in the way of realising the ambitions of the early aviators.

He would draw a parallel with the evolution of the motor car, a period with which he had been closely associated, and would argue that there was bound to be even greater possibilities in the development of the aeroplane. His judgment invariably proved right, although it was based upon intuition rather than technical knowledge.

Few people have lived as full and interesting a life as Stanley Spooner. He grew up with two industries which were destined to become great: the motor car industry and the aircraft industry, and he recorded their birth, trials, successes and failures in his two journals. When he realised that the pace was becoming rather too hot for a man of his age, he sold Flight to his old friend. Lord Iliffe (the "Auto" he had sold previously, and it has now ceased publication). This was in 1934. We of the old staff have never had cause to regret Mr. Spooner's choice of successor. We have been permitted to continue in the spirit in which we were brought up, so to speak, and we know that our late Chief has followed with interest and pleasure the further progress of Flight which the great Iliffe organisation has made possible.

Stanley Spooner was a gentleman in the best sense of the word. He was a type which was none too common in his generation, and which has now all but disappeared. All of us who knew him are the better for his friendship, and all of us will miss him greatly. May he rest in peace.