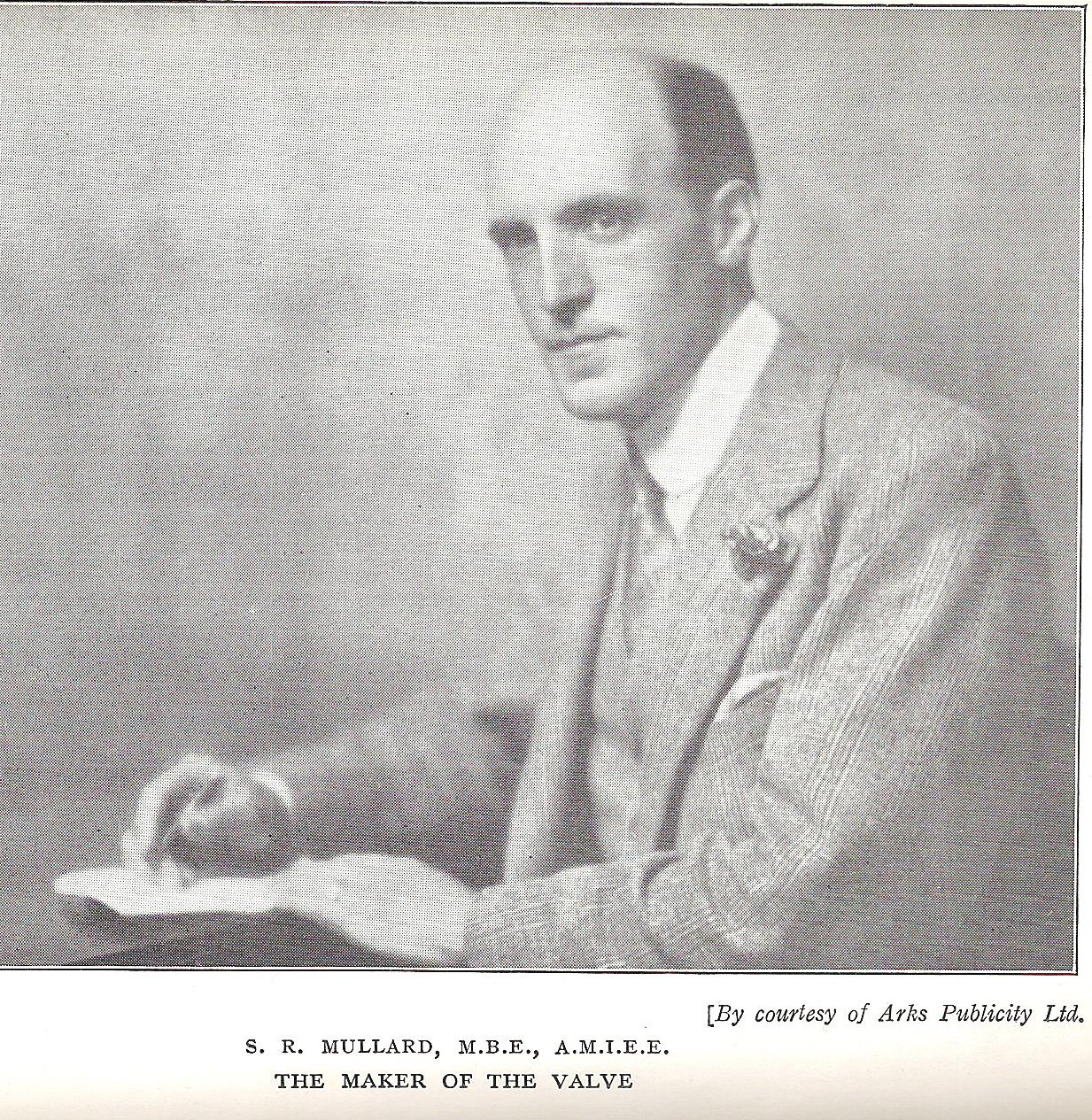 1883 born in Bermondsey, London, on 1 November, the third of five children of Robert Mullard and his wife, Ann, née Ludford.

1903 He joined the Institution of Electrical Engineers as a student.

By 1906 was a director of the Mackey company.

1916 Posted to the wireless telegraphy establishment in HMS Vernon to assist in developing silica radio valves for high-powered wireless transmitters.

1919 After demobilization, Mullard was appointed managing director of the Z Electric Lamp Co and also continued his research for the Royal Navy on wireless valves.

1920 The first successful silica transmitting valve, produced in September 1920, had an output of 10 kilowatts on test — sixty times the maximum power from contemporary valves with glass envelopes.

1920 Set up the Mullard Radio Valve Co, which at first used part of the Z-Company's works at Southfields, Wimbledon. Mullard's company was financed by the Radio Communication Co, a bacon producer and a firm of East India Merchants, on the strength of an order for 250 silica valves (at £66 each) from the Admiralty.

1921 Company moved to its own premises in Claybrook Road, Hammersmith. Soon Mullards was selling valves at about half the prices of other manufacturers.

1922 the Marconi group brought a suit against Mullards, alleging infringement of their patents. Mullard fought the case as far as the House of Lords, with judgment given in his favour at every stage. Against Marconi's opinion that the design of valve published in a German book would not work, Mullard made 20 overnight and demonstrated them in a receiver in Court the next day. His small company would probably not have survived without the support of his backers and of the Admiralty.

1923 the company moved to new premises in Nightingale Lane, Balham, increasing its manufacturing capacity to meet the demand for valves for small receiver valves.

1925 Because of lack of development capacity, Mullard sold 50 per cent of its stock to N. V. Philips Gloeilampenfabrieken of the Netherlands, in order to benefit from Philips's research and patents.

Marconi acquired Radio Communication Co which reduced the support Mullard received from his shareholders to hold off Philips.

1927 The company became a fully-owned subsidiary of Philips. Mullard was appointed managing director by the Philips board.

1929 For a brief period was involved with the Everlite company which intended to produce a new light bulb.

1929 After considerable friction, Mullard resigned as managing director of both companies, continuining as chairman of the Wireless company[2]. He remained a director until 1970.

Withdrew entirely from the radio industry after this, devoting his time to horticulture.

Stanley Robert Mullard MBE (MIL), one of the pioneers of the UK radio industry, died on September 1, 1979 at the age of 95.

Stanley Mullard was born in 1883 and after leaving school and attending a Sussex polytechnic, joined a firm of electric lamp manufacturers. He continued his studies at the Northampton Institute (now the City University) and became a director of the company when he was only 24. Later he joined the Ediswan Company and in 1915, while working in the lamp research laboratory, he developed the 'Pointolite' arc lamp which was used in projection apparatus for over 40 years.

At the start of the first world war Stanley Mullard enlisted in the Engineers' Battalion of the Royal Naval Reserve, but continued his work at Ediswan at the Admiralty's request. His interests by then extended to radio valves and his wide knowledge of glass technology and vacuum techniques enabled him to make valuable contributions to the fast growing use of valves in military radio equipment.

In 1916, as a lieutenant in the RN Volunteer Reserve, he was posted to the RN Air Service and put in charge of a special valve laboratory at Imperial College, London. It was largely due to his participation that the manufacture of silica-type power transmitting valves became practicable by the end of 1919. By September 1920, an order for 250 valves raised the capital required for him to form the Mullard Radio Valve Company.

Demand for small receiving valves quickly exceeded output time and again, in particular with the introduction of the BBC's London transmitter, 2LO, until by 1924 production had reached 2.2 million a year. By demonstrating that reliable valves could be made cheaply Stanley Mullard helped materially to lay the foundations of the British radio industry.

Further increases in production and the establishment of the Mullard Wireless Co., to handle marketing and distribution, were followed by the need to move to a larger factory at Mitcham in Surrey. Eventually the call for research facilities beyond the scope of such a young company led to the establishment in 1924 of close links with NV Philips in Holland and over the next few years Philips acquired all the shares in the company.

In 1929 Stanley Mullard resigned as managing director of the company, but continued as a director actively interesting himself in the company's affairs until its golden jubilee celebrations in 1970. He lived to see the small venture he founded grow to an organisation employing more than 11,000, people and occupying a leading place in the world's electronic industry.