The cast iron trough can be seen behind the towpath bridge

Looking down the gap between trough and towpath bridge, we see the bolted flanges of the cast iron trough, and the cast iron beam added to support the underside in 1875 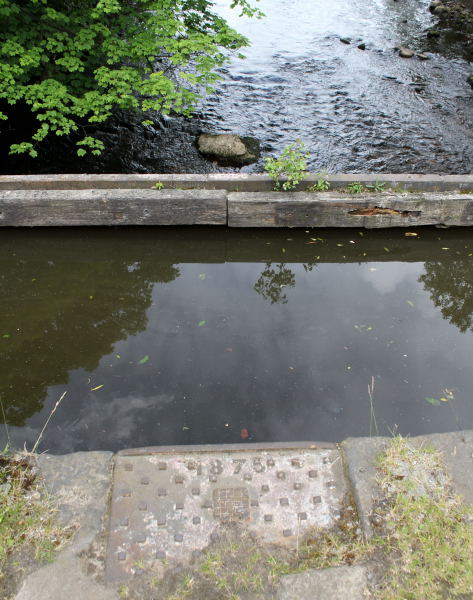 1875 plate, below which is the vertical tension rod connected to the support beam

Northern corner of aqueduct. The cast iron block above the top flange was added in 1875 to attach diagonal tie bars for reinforcement

This is a cast iron aqueduct built in 1800 (some sources say 1799-1801) to carry the Huddersfield Narrow Canal over the River Tame. The responsible engineer was Benjamin Outram.

It can certainly claim to have the least attractive location of any early UK iron canal aqueduct, and those who do seek it out will find there is little to see. The most interesting aspect, the north east face, is inaccessible for viewing. However, a photograph taken c.2001 has been provided by David Brown, taken from a site now occupied by a large plastics recycling plant. Another view is available here[1]. The duct is assembled from numerous small lightweight cast iron panels, characterised by a profusion of stiffening webs.

The trough is assembled from flanged cast iron plates. The towpath is carried by a hump back masonry bridge immediately alongside.

Concerns about strength of the aqueduct led to its reinforcement in 1875. On the now-inaccesible side, wrought iron trusses are fitted, connected to a support beam underneath at mid span. On the towpath side this beam is supported from the hump back bridge by a tie rod and spreader plate the the date 1875 cast in.

The aqueduct is Grade II listed. Details here. The Butterley Co is credited as the maker of the castings.

The aqueduct can be seen from the bridge taking Tame Street over the River Tame. Visitors determined to get close can head south east to access the towpath from a lane branching off Tame St, heading off left before getting to High St.

The 1892/1894 O.S. map [2] shows that immediately north of the aqueduct was the Globe Iron Works of John Summers and Sons. Immediately south was Aqueduct Mill. Tame Street did not exist at that time.