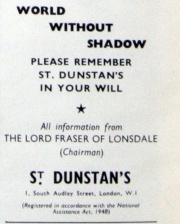 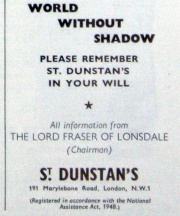 St. Dunstan’s wants to help as many ex-Service men and women as possible, regardless of how and when they lost their sight.

Some St Dunstaners lost their sight in wartime on active service, often suffering associated injuries as well. But many have been injured while on training exercises, have been blinded by disease or accident or suffer impaired vision brought on by old age.

Applicants must have served in the UK Armed Forces at any time or in the Polish forces under British command or in the Merchant Navy during World War II.

1915 St. Dunstan’s was established by Arthur Pearson, a great newspaper proprietor who owned the Evening Standard and founded the Daily Express. In 1913 he had become President of the National Institute for the Blind (later the Royal National Institute for the Blind) and had lost his own sight due to glaucoma. When men blinded in combat started coming back from the First World War it was decided that a hostel should be opened for these soldiers and sailors. Pearson’s vision was that, given training, they could be transformed from recipients of charity to people who could lead independent, useful and satisfying lives. The idea was revolutionary in its day.

St. Dunstan’s first home in London’s Regent’s Park, became the training centre and workshops for Pearson’s new ‘blind army’. Men came back from the battlefields having lost their sight from bullet wounds, bombs, shellfire and mustard gas poisoning. Many had also lost limbs or were the victims of shell shock.

Before the end of 1918, over 1500 men had been taught new skills. They went on to pursue such diverse occupations as massage, boot repairing, poultry farming, telephone switchboard operating and joinery. Such jobs might seem mundane today, when technology makes so much possible, but in a time when even the white stick didn’t exist, these men were real pioneers.

WWII. The Second World War brought another generation of St. Dunstaners. Many were taken prisoners of war in Europe and the Far East. Again their injuries went beyond blindness. Servicemen endured deprivation, cruelty and forced labour at the hands of the Japanese and became blind either as a result of injury or from the effects of malnutrition and beri beri. Women were also affected – many who worked in munitions factories lost their hands and sight as a result of accidental explosions.