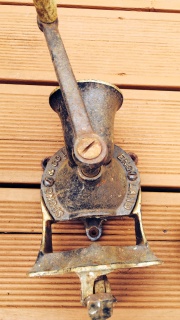 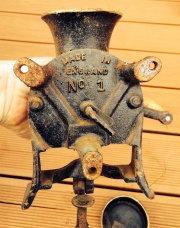 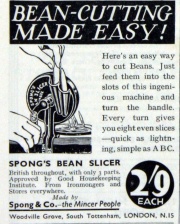 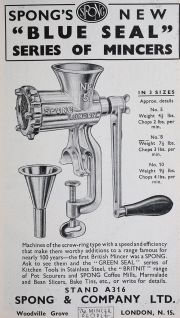 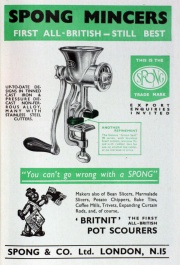 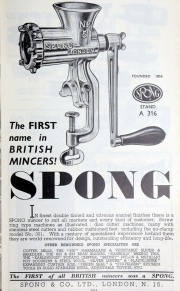 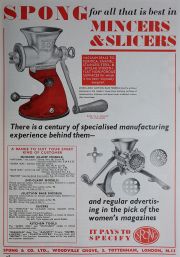 1839 James Osborn Spong was born in Yardley Hastings, Northampton. He was the eldest son, and one of six children of, James Spong, a minister, and his wife, Eliz. He given his mother’s maiden name of Osborn as his second name.

By 1843 the family had moved to Bedfordshire.

Of James Osborn Spong’s siblings, two sisters died as infants. There is no information about his youngest sibling. His two brothers were Ambrose Daniel and George Mansfield. Ambrose followed his father into the ministry. James Leonard Spong, one of Ambrose’s three children, followed in the footsteps of his uncle James O and can be found raising patents during the 1930s and '40s. George followed his older brother James O, and in 1873 the two of them raised a joint patent for ‘signalling in railway trains’.

By 1861 he was in business as varnish and japan manufacturer, with his brother and probably with John Jacob Schweizer.

1867 James O married Frances Elizabeth Scott and settled in Brompton, Middlesex, moving to 105 Fulham Road, Kensington, shortly after the birth of their first child, James William, who was born in 1868.

1882 Spong and Co proved to be manufacturing leaders in their field boasting sales of 200,000 mincers by 1882. They could boast that their mincing machine was owned by Her Most Gracious Queen Victoria, the Admiralty and the War Office, and could be found in the mansions of the nobility, the mess-rooms of the army and navy at home and abroad, also in the universities, colleges and many other great institutions of England.

c.1886 The Spong family moved to 21-26 High Holborn, then to Streatham, before moving to St Pancras by 1901 and later to 65 Adelaide Road in northwest London sometime before 1910.

1895 Spong and Co were still manufacturing the ‘Original Sausage and General Mincing Machine’, plus a further four mincing machines that had been developed over the intervening years. Two coffee and/or spice mills were also developed. Knife cleaning machines included, the ‘Non-XL Knife Cleaners’, cleaning between three and ten knives at a time made as a table top or free standing machine, and the ‘Servants Friend’ and ‘Lady’s Knife Cleaner’ that cleaned between one and three knives at a time - both used the friction of leather pads and emery powder to clean the knife blades.

1895 Spong and Co of 226 High Holborn, London, patentees and manufacturers, knife cleaners and knife rests. The works were in Emerald Street, London[5]

The company founded by James Osborn Spong continued to grow. Through his company, he left a huge legacy to kitchen equipment and utensils and are now best known for their kitchen utensils, especially the mincing machine and bean slicer, that were obligatory pieces of kitchen equipment to have until the development of electrical equipment for modern kitchens. They were also one of the leading companies specialising in labour saving devices for the home. Spong and Co manufactured machinery that ‘promoted domestic economy’, an essential factor for the emerging Victorian middle class who did not have the unlimited funds for employing numerous household servants.

Other innovative ideas included the ‘Gas Utilizer’ patented in 1887; the ‘Portable Shampoo’, a forerunner of the shower, which was recommended for ‘summer and winter use’, patented in 1890. They also made a range of ‘Corner Weights’ in varying sizes to hold down mats and carpets, and manufactured a range of animal traps from mouse and rat traps for the home right up to wildcat and wolf traps.

Other kitchen gadgets available, circa 1895, included: a whisk and mixer, a universal slicer for bread, meats, vegetables and fruit, a bread cutter, a wrought-iron folding cask stand with an adjustable screw tilt enabling wine and ale to be drawn perfectly to the last drop in the cask, and the ‘ABC Ice Cream and Solid Ice Freezer’.

1901 James O was listed as the manager of an ironworks in St Pancras. James W, Minnie, Annie and Florence were living with their parents James O and Frances Spong in St Pancras.

1902 James Osborn Spong was joined at Spong and Co, by his son James William Spong, the company head office and showroom being still located at 226 High Holborn, but due to the High Holborn improvement scheme the company moved to temporary premises across the road at 98 High Holborn before returning to their initial location in 1917. Shortly after joining the company, James W married Alice Spencer and they had Donald William in 1904 and Roger Spencer in 1906.

1909 On 18th January, during their time in temporary premises, Spong and Co became a Private Company. Around this date Spong and Co also acquired their first factory building that was in their sole occupancy being built at Baron’s Place, Lambeth, London, which remains virtually unchanged to this day.

By 1923, James W and his family had moved to 27 Braemar Road, South Tottenham in London, and James W, again like his father, started to raise various patents from 1923 until the late 1930’s.

Apart from the company he founded that helped to revolutionise kitchen equipment and utensils and the preparation of food, James Osborn Spong spent most his life inventing - raising over 100 patents during his lifetime, the last in 1919 at the age of eighty.

As well as kitchen gadgets, Spong and Co also offered a repair service should any of their or any other manufacturer’s gadgets break or need servicing. As late as 1955, the company still had a repair section for knife cleaners.

c.1923-31 James W, like his father, also had an inventive mind and raised numerous patents during his lifetime. His initial patents, circa 1923 to 1931, were for improvements to kitchen equipment that was already being manufactured.

1925 James Osborn Spong died at the age of 85, and was buried at St John’s, Felbridge, on 13th July. His grave is unmarked having no headstone or curb-stone. James W Spong who had by then been joined by his two sons, Donald and Roger Spong, took on the running of the company, which also moved premises from Holborn to Woodville Grove, South Tottenham, London - although the exact date is unknown but the company was operating from the new premises by the early 1930’s.

1931-32 With James W Spong’s knowledge of wire, he began to raise patents involving its use. He also filed two patents to improve the construction of wireless apparatus, firstly the improved construction of the aerial and secondly the earth device.

1932 Donald Spong became a Director, and his brother Roger became a Director in 1935, with both Donald and Roger becoming joint Managing Directors in 1944. The company was, by now, well-established household name linked with the production of kitchen utensils such as, mincers, slicers, shredders, graters, coffee mills, baking tins and various metallic and plastic scourers, many of the products being of very similar design and concept to those produced under James Osborn Spong in the 19th and early 20th century. Most of the products were marketed under the well-known Spong trademark and were sold throughout the United Kingdom, with a substantial export trade that had steadily grown since the Victorian era.

1960 In December,Spong and Co became a Public Company, still registered at the company’s freehold premises at Woodville Grove which, by then, included the factory, stores and offices, covering a total of 35,000 square feet. The plant consisted mainly of presses, lathes, drilling and grinding machines and wire working machines. There was also a tinning and plating shop. The company also had its own tool room where many of its special purpose machines had been designed and built. There was also a printing department for the production of the company’s sale catalogues and other advertising material. The company had over 250 employees, which included over 50 out workers.

1962 The company moved to Crompton Close, Basildon, Essex, as their old premises had become inadequate for the company’s increasing turnover.

1963 Probably last household gadget to be manufactured by Spong and Co, was the Corkette, an air cork ejector. They registered a design for the cork ejector that had been patented by Robert Pollak of Promac Engineering Ltd in 1962.

By the late 1970s, Spong and Co were experiencing mixed fortunes

c.1982 Spong and Co Ltd became Spong Holdings plc; the business continued to operate successfully the two other sections of its business, the wire works and the printing business.

After the sale of the hardware section, the 70,000 square footage of factory floor space at Crompton Close, from where the wire works and printing business operated, was now far too large and was put up for sale. Due to the economic climate of the 1980s, a purchaser for the factory was hard to find and it became an economic drain on the company.

1989 The businesses were moved to South Wales as part of a restructuring; new management was brought in by external investors[9]. The new management sold some businesses and acquired others, such as Hamilton Group, maker of paint brushes[10]

1990 Acquired Acorn, another brush maker[11] and the original cookware business of Thorpac[12]

2003 After the MBO of the filters business, the cash shell was acquired by Sigma Technology[13]

The production of filters had been established in the 1930s when General Motors suggested that the technology developed to produce knitted pot scourers could be adapted to produce filters for car engines.

The wire works produced pot scourers and filters for different makes of car engines and in the 1980s was a thriving business.

Soon after the move to Repton Close, there was a management buy-out of the filters side of the business which then changed its name to Brit Nit.

Brit Nit was eventually sold to Cafetiere Household Articles. The succession of changes from Spong and Co to Brit Nit included the involvement of Christopher Spong, the great grandson of James Osborn Spong who had founded the company, and the last member of the Spong family to be involved with it. Christopher Spong had joined the company in 1955, following his father Roger, and uncle Donald Spong, and eventually retired from the business in 1985.