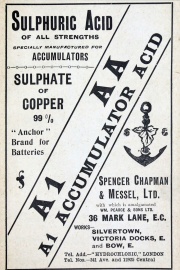 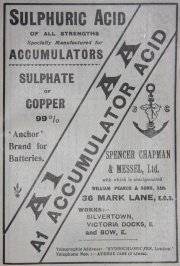 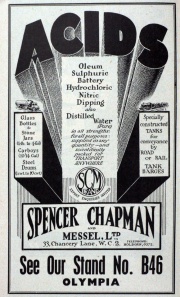 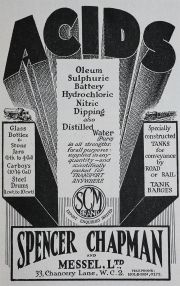 1872 William Stevens Squire (1834–1906) of Dunn, Squire and Co, initially at Stratford in Essex, formed the company Squire, Chapman & Co. with Mr Spencer Chapman in premises at North Woolwich Rd, Silvertown, as makers of sulphuric acid[1]. Squire took his assistant Rudolph Messel with him to the new business.

Messel developed a process for the manufacture of fuming sulphuric acid, which was in great demand as a raw material in the dyestuffs industry. The key to the process was the combination of pure sulphur dioxide and oxygen gases using a platinized pumice catalyst. The process was patented by Squire in 1875. [2]

Although the contact process had been known since 1831, its industrial use had hitherto been frustrated by the problem of catalyst poisoning. Squire and Messel overcame this by employing very pure gases, obtained in the beginning by pyrolysis of chamber acid. They used the process to make oleum, which was in growing demand for the synthesis of alizarin and unobtainable by the lead-chamber process.

1876 they erected a plant at Silvertown, in east London, with a capacity of several tons of oleum a week.

1878 Messel succeeded Squire as managing director when he left the business; the firm became Chapman, Messel and Co.

The company as the largest of the three British firms capable of producing oleum before 1914.

1915 Messel resigned because of ill health.

1923 Vanadium pentoxide was introduced as the catalyst for the process in place of platinum.

Theodore St. Just and Co, maker of organic chemicals, was a subsidiary[7]

1960 Acquired by Borax (Holdings) who sold 45 percent of the shares to F. W. Berk and Co[8], their former neighbour in East Ham

1966 The industrial acids business of F W Berk was combined with that of Spencer Chapman and Messel as Berk Spencer Acids, of which F W Berk owned 40 percent[10]