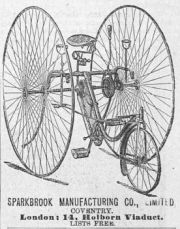 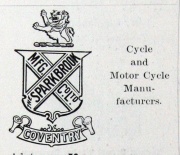 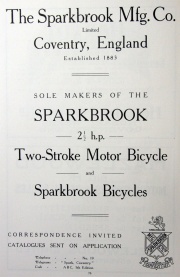 of Paynes Lane, Coventry were makers of the Sparkbrook cycles, and motorcycles from 1912 to 1924.

1912 Late in the year, this long-established cycle firm entered the powered market with a single sidecar model. It had a 6hp JAP engine, two-speed gearbox, chain-cum-belt drive and Druid forks. The coach-built body was suspended on C-springs.

1915 Production of the sidecar model stopped, but a light solo was listed and this alone continued into the following year.

1919 Two models appeared, each with the 269cc Villiers engine. One had direct-belt drive, and the other two speeds via their own counter-shaft gearbox with belt final drive.

1921 Those two models continued with the additional option of a two-speed Sturmey-Archer gearbox. During the year a utility-version of the direct-drive two-stroke was added and sold from 1922 to 1923 as the Spark.

The Spark was a very basic utility model fitted with the 269cc Villiers two-stroke engine and direct-belt drive. It had a simple frame with pressed sheet-steel lugs and Gosport front forks. When Villiers stopped making the older engine, the 247cc unit was used in its place.

1923 They changed to the new Villiers 247cc and 343cc engines, kept the 346cc sv JAP and added another model with the 349cc sleeve-valve Barr and Stroud. All modes came with a choice of transmissions and speeds, together with complete sidecar combinations with the four-stroke engines.

1924 A 349cc ohv Bradshaw engine replace the JAP, and that, with the others, brought the marque to its close.