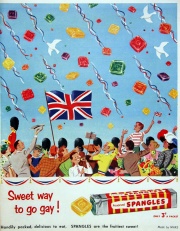 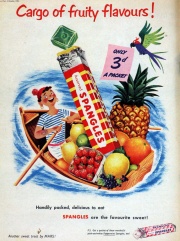 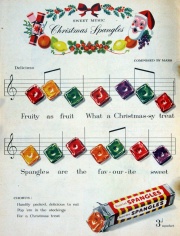 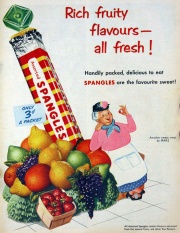 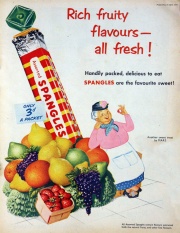 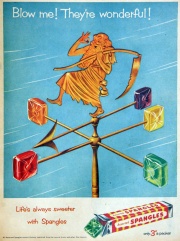 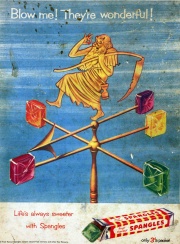 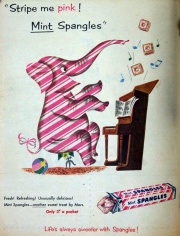 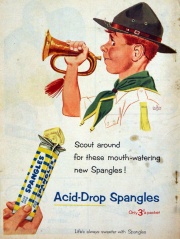 Spangles were square boiled sweets, bought in a paper tube with individual sweets cellophane wrapped. They were manufactured by Mars (foods) in the United Kingdom from 1950 to the early eighties. They were distinguished by their shape which was a rounded square with a circular depression on each side.

Originally the sweets were not individually wrapped, but later a waxed paper, and eventually a cellophane wrapper was used. The tube was a bright orange-red colour, bearing the word "Spangles" in a large letters. In the seventies a distinctive, seventies-style font was used.

The Old English Spangles tube contained traditional English flavours such as liquorice, mint humbugs, cough candy, butterscotch and pear drops. One of the flavours was an opaque mustard yellow colour, and one was striped.

The sweets' individual wrappers were striped, distinguishing them from regular Spangles. The tube was black, white and purple, and designed for a more mature and specific clientele than the regular variety.

Spangles were discontinued in the early eighties, and briefly reintroduced in 1995. There are many nostalgic references to them from children who grew up with them.

Today the Tunes brand is the only remaining relation of the Spangles brand, sharing the shape and wrapping of the original product. In the UK, Tunes no longer have the Spangles style packaging, and they are now lozenge-shaped.