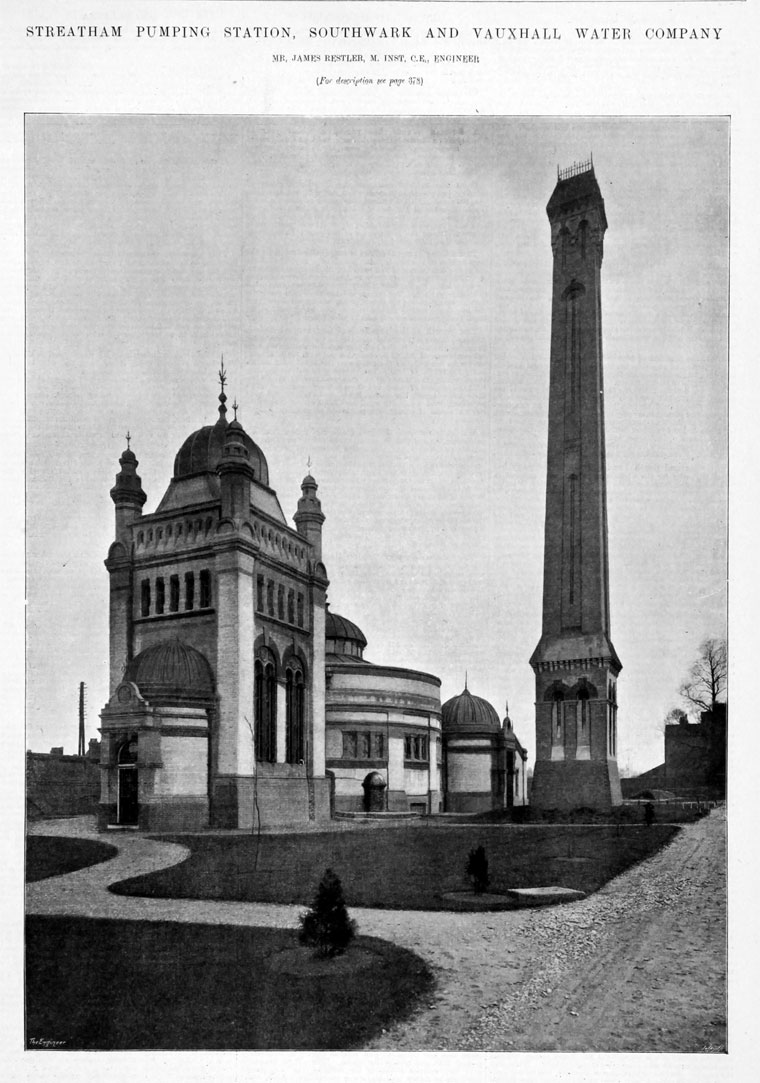 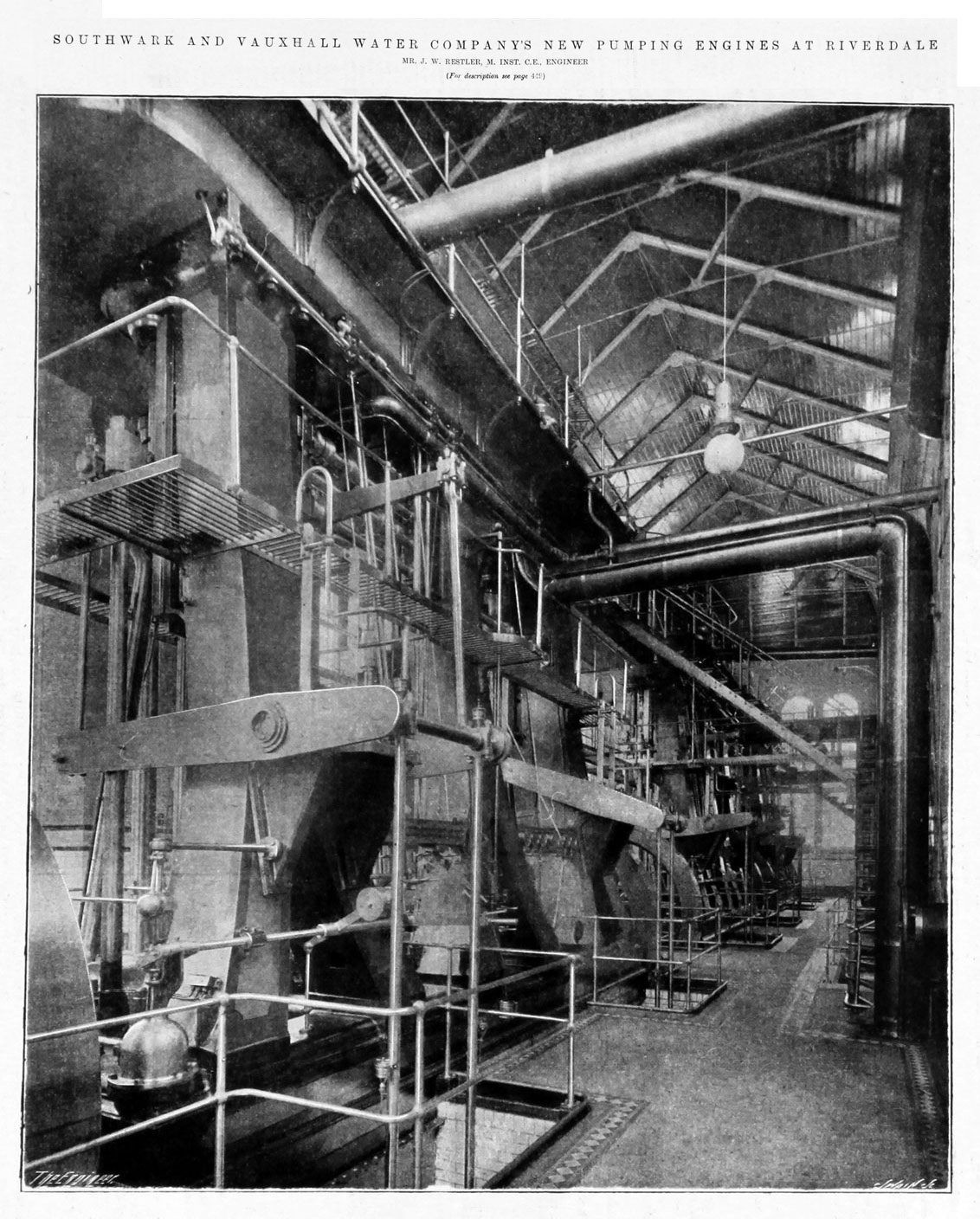 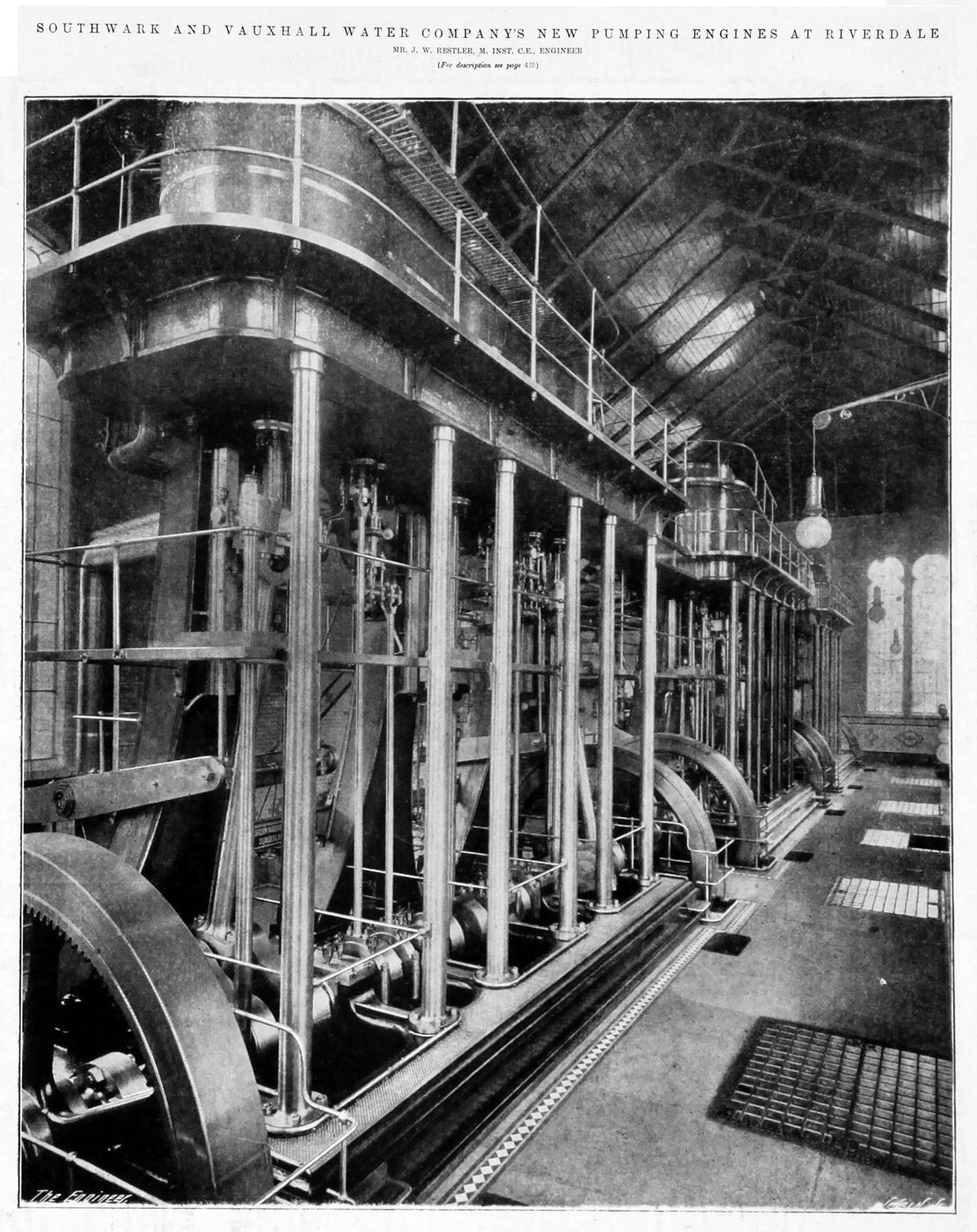 1845 Company formed by the amalgamation of the Southwark Co and the Vauxhall Waterworks Co, which was originally established under the title of the South London Waterworks[1]

Between 1845 and 1847 the Vauxhall Company's works at Vauxhall Bridge were abolished and the united Company’s works were concentrated at Battersea.

1850 Sir W. Clay, chairman of the Grand Junction and Southwark and Vauxhall companies, wrote a report on the state of water supply in London but his claims about the purity of the water taken from the Thames drew a sceptical response[2]

1852 The Southwark and Vauxhall Water Company Bill went through Parliament[3] This allowed a change of the source of supply from Battersea to Hampton. The company arranged to supply Putney

1856 The company started to supply Wimbledon

1875 Public concern about the safety of the new reservoir at Nunhead prompted a response to The Times by the company; Messrs Quick and Son had supervised the work, which had been constructed by John Aird and Sons[6]

1876 As result of considerable disquiet, the company's accounts were examined and restated; a new engineer had been appointed who had improved efficiency but whose inspection of the new Peckham facilities had led to such concern that he did not want to fill them until further consideration had been given to the construction[7]

1876 Thomas William Rumble was Chief Engineer to the Southwark and Vauxhall Water Co when Alfred James Corry was articled to him.

1877 An outside inspection had criticised the positioning of the existing works at Nine Elms; the company had obtained land at Hampton to build new works but had not taken action on this[8]

1877 The company supplied 180,000 premises; it was said to be the "worst and dearest" in London, the water being "full of organisms"; the company had refused to permit meters being used but charged by rateable value[9]

1884 Complaints continued about disruptions in customer's supplies[10]. A new deep well (260 ft) at Tooting had interfered with water supplies from older traditional wells[11]

1891 There had been failures in the mains from Hampton but more engine power was also needed there; several more reservoirs were needed at Nunhead; a well was planned at Streatham but no reservoir[12]. In response to the delineation of problems in supply, the engineer of the company, Mr Restler, said that c.76 percent of the houses supplied by the company were on constant supply[13]

1903 Compulsorily acquired by the Metropolitan Water Board, established to bring the 9 private water companies supplying water to London under a single public body.

1898 The pumping plant at the Streatham Works is from the designs of James William Restler, M. Inst. C.E., the engineer to the company, and was constructed by Messrs. James Watt and Co., Soho. Possibly the last work done by the old firm.

It consists of two sets or triple-expansion horizontal engines, gearing into countershafts, each countershaft being connected by means of cranks at either end to a set of deep well pumps, and a bucket-and-plunger pump.

The engine is of the two-crank type, the high-pressure and intermediate cylinders being arranged tandem, the cranks being set at right angles. The diameters of the cylinders are 8.75in., 13in., and 25in., with a stroke of 2ft. The cylinders, together with the whole of the valve chests, cylinder covers, &c., are provided with steam jackets, having separate steam and drain pipes to each. The high-pressure valve chest is fitted with adjustable slide and cut-off valves of the Meyer type. The engine crank shaft is 6in. diameter, in two parts, and the countershaft is 8in. diameter. Cranks are fitted at the end of each counter shaft, and these cranks are connected by means of rods to the well pumps and pressure pumps. The engine bed-plate is of massive construction, and is provided with pedestals for the shafts, having three-part brasses with wedge adjustments. [15]

Water Works at Hampton and Sunbury

1901 "The Southwark and Vauxhall Company's arrangements are excellent, and of particular interest are the new pumping engines at Riverdale, as the site of the Hampton works is termed. These engines have now been running for some little time most satisfactorily, .... the building in which they are contained. It is a continuation in the same line of the older buildings of the company, and the three engines of the present extension are each of them capable of pumping nine million gallons in the twenty-four hours under a head of 280ft. They are of the vertical marine type, and run ordinarily at 25 revolutions per minute. They are triple expansion, the sizes of the high, intermediate, and low-pressure cylinders being 20in., 29in., and 54in. in diameter respectively, and the stroke being 5ft. The high and intermediate- pressure cylinders are fitted with piston valves, the low-pressure having a flat slide valve. The engines run condensing, and the air and circulating pumps for the surface condenser are worked off the high and low-pressure cross heads. There are two fly-wheels, one at each end of the engine. .... There are three pumps to each engine, they are all double-acting, and l6.5in. diameter, by 5ft. stroke. Steam is supplied from a double range of Babcock and Wilcox boilers contained in a boiler-house adjoining the engine-room, which, it may be remarked, is one of the finest of its kind that exists....."