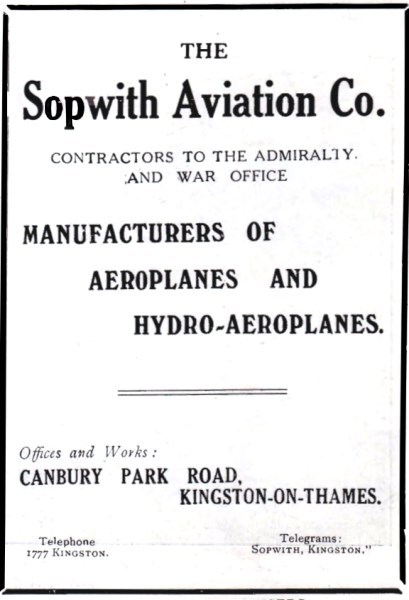 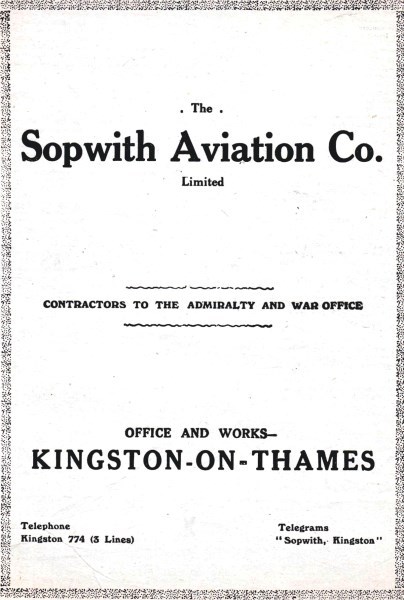 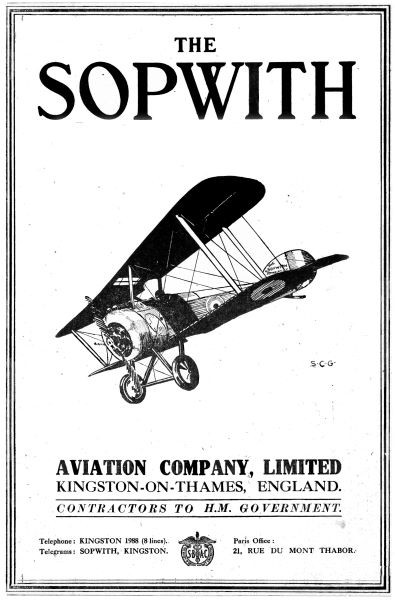 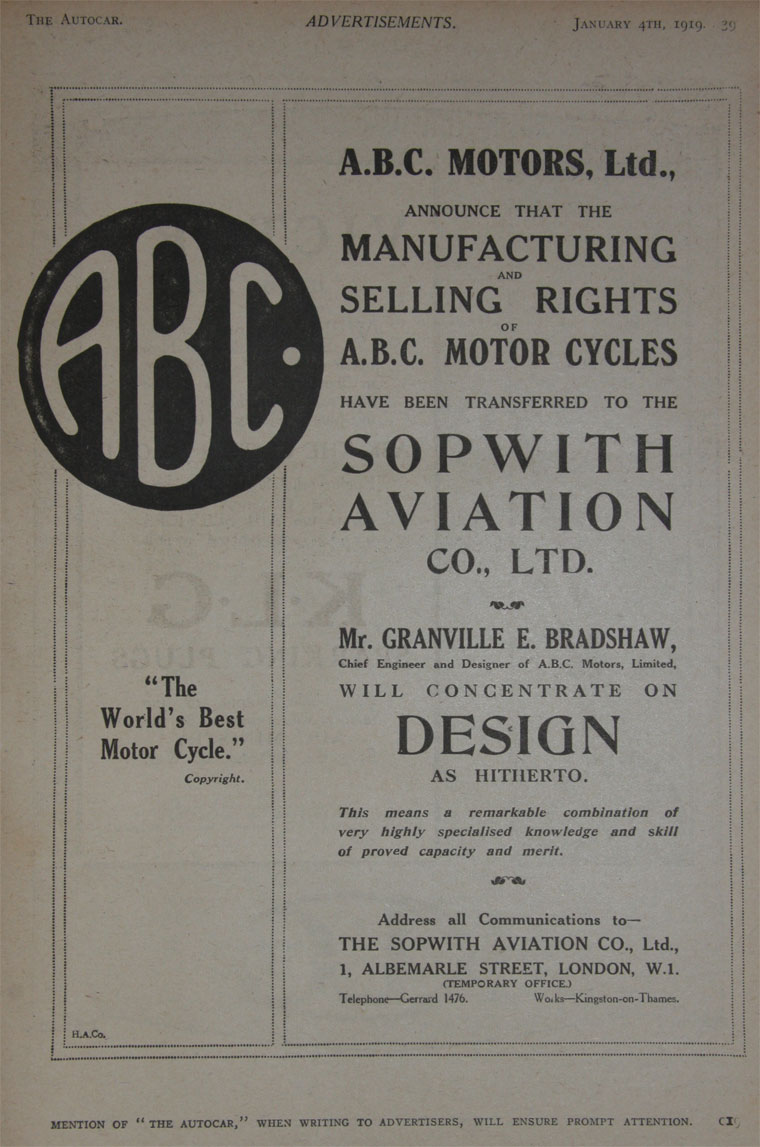 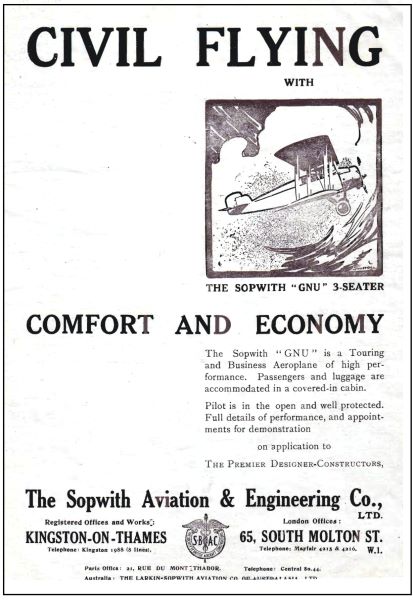 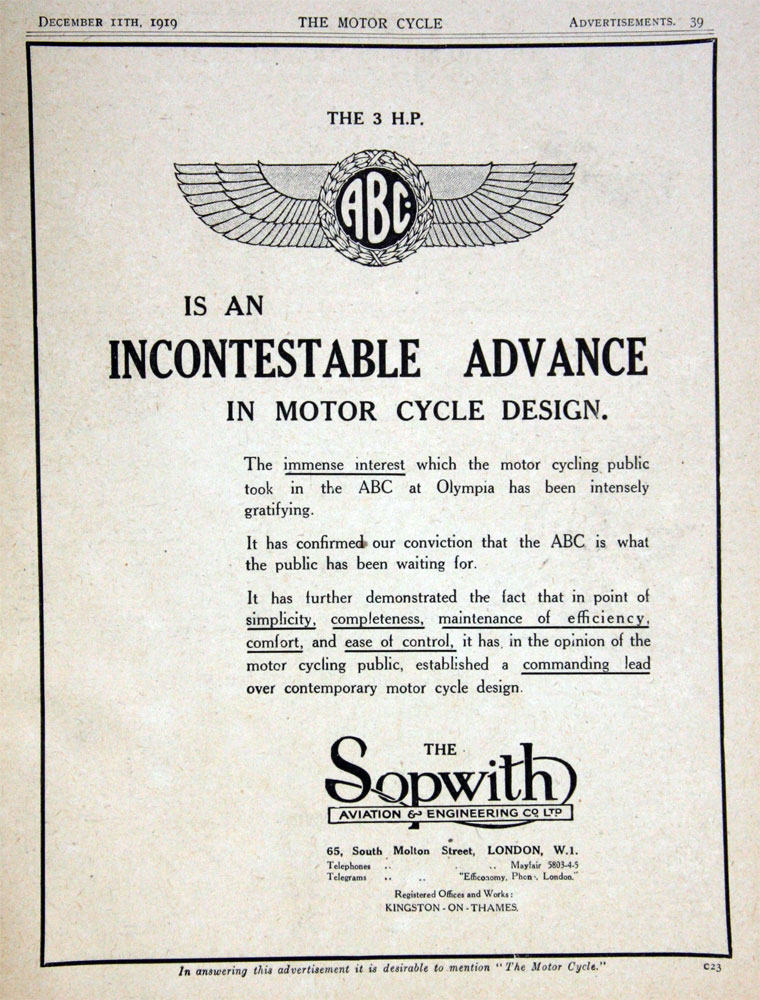 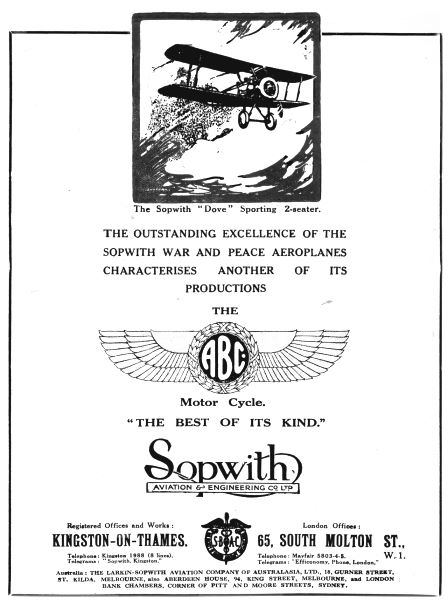 The Sopwith Aviation Company was a British aircraft company that designed and manufactured aeroplanes mainly for the British Royal Flying Corps, Royal Naval Air Service and later Royal Air Force in the First World War, most famously the Sopwith Camel. Sopwith aircraft were also used in varying numbers by the French, Belgian and American air services during the War.

1912 The company was founded in Kingston upon Thames by Thomas Octave Murdoch (Tommy, later Sir Thomas) Sopwith, a well-to-do gentleman sportsman interested in aviation, yachting and motor-racing, in June of 1912. The company's first factory premises opened that December in a disused ice rink.

Initially, Tom Sopwith himself, assisted by his former personal mechanic Fred Sigrist, led the design of the aircraft. Following a number of unremarkable pre-war designs for the Royal Naval Air Service, such as the Three-Seater and Bat-Boat, Sopwith's first major success was the fast and compact (hence the name) Tabloid, a design which first showed the influence of the company's test pilot, the Australian Harry Hawker.

1914 A float-equipped version of the Tabloid won the Schneider Trophy in 1914. The land plane version was used by both the RNAS and RFC at the start of the war. With higher power and floats, the type evolved into the Sopwith Baby, which was a workhorse of the RNAS for much of World War One.

WWI During the First World War, the company made more than 16,000 aircraft and employed 5,000 people. Many more of the company's aircraft were made by subcontractors than by Sopwith's themselves. These included Fairey, Clayton and Shuttleworth, William Beardmore and Co and Ruston, Proctor and Co.

Following World War I, the Sopwith Snipe was chosen as the standard fighter of the much-reduced Royal Air Force, and soldiered on until finally replaced in the late 1920s.

1919 By arrangement All British (Engine) Co designed a motorcycle that Sopwith made and sold as a way of providing work for the factory after the war but this was not a commercial success.

Sopwith attempted to produce aircraft for the civil market based on their wartime types, such as the Dove derivative of the Pup and the Swallow, a single-winged Camel, but the wide availability of war-surplus aircraft at knock-down prices meant this was never economic.

The Sopwith company was wound up in 1920 after failing to achieve sufficient success with civilian products to compensate for the drop in military aircraft orders after the end of the War and a potential large demand from the government for Excess War Profits Duty.

1920 Upon the liquidation of the Sopwith Aviation Company, Tom Sopwith himself, together with Harry Hawker, Fred Sigrist and Bill Eyre, immediately formed H. G. Hawker Engineering, forerunner of the Hawker Aircraft and Hawker Siddeley lineage.

1920. The Sopwith factory on Ham Common was purchased by Leyland Motors.

Post-WWI: Sopwith Aviation and Engineering Co Ltd was awarded £40,000 by the Royal Commission on Awards to Inventors for the Cuckoo, Dolphin, Snipe and Salamander aeroplanes[1]

Tom Sopwith was Chairman of Hawker Siddeley until his retirement. Hawker and its successors produced many more famous military aircraft, including the inter-war Hart, and Demon; World War 2's Hurricane, Typhoon, and Tempest; and the post-war Sea Fury, Hunter and Harrier. Incredibly, these later jet types were manufactured in the same factory buildings used to produce Sopwith Snipes in 1918.

The land plane version of the Tabloid was used by both the RNAS and RFC at the start of the war. With higher power and floats, the type evolved into the Sopwith Baby, which was a workhorse of the RNAS for much of World War One.

In 1916, Herbert Smith became Chief Engineer of the Sopwith company, and under his design leadership its other successful World War I types included the larger Type 9901. This aircraft, better known as the 1 1/2 Strutter due to its unconventional cabane strut arrangement, was used from 1916 by the RNAS, RFC and the French Aviation Militaire as a single-seat bomber, two seat fighter and artillery spotter and trainer. Soon after came the small and agile single-seat Scout, which quickly became better known as the Pup because of its obvious descent from the 1 1/2 Strutter. The Pup and 1 1/2 Strutter were the first successful British tractor fighters equipped with a synchronising gear to allow a machine gun to fire through the rotating propeller. This gear was known as the Sopwith-Kauper gear from its designers, although several other designs were used later. The Pup was widely used on the Western Front by the RFC and from ships by the RNAS from the autumn of 1916 to the early summer of 1917, and was considered a delight to fly by its pilots. It continued in use as an advanced trainer for the remainder of the War.

Experimentally equipped with three narrow-chord wings and a more powerful engine, the Pup led to the Triplane, which was used only in small quantities in the spring of 1917, but became well-known for its startling fighting qualities, put to best use by Raymond Collishaw's famous 'Black Flight' of 'Naval 10' (10 Squadron, RNAS). This flight was so called due to the black identification colour of the flight's aircraft, which in turn led to their naming as Black Maria, Black Prince, Black Death, Black Roger and, rather lamely, Black Sheep. Such was the impact of this type that it spawned a large number of experimental triplane designs from manufacturers on all sides, although only the Fokker Triplane achieved any subsequent success.

In the early summer of 1917 the twin-gun Camel fighter was introduced. This aircraft was highly manoeuvrable and well-armed, and over 5,000 were produced up until the end of the War. It destroyed more enemy aircraft than any other British type, but its difficult flying qualities also killed very many novice pilots in accidents. It was used, modified, as both a night-fighter and shipboard aircraft, and was flown in combat by the Belgian and American Air Services as well as the British.

Later still in front-line service came the stationary-engined four-gun Dolphin and the ultimate rotary-engined fighter, the Snipe. The Snipe saw little wartime service, being issued only in small numbers to the Front, but William George Barker, the Canadian Ace, won a Victoria Cross flying one in an epic single-handed dogfight against enormous odds.

Towards the end of the war the company produced the Cuckoo torpedo-bomber and the Salamander armoured ground-attack development of the Snipe, but these types were too late to see action. Many other experimental prototypes were produced throughout the war, mostly named after animals (Hippo, Gnu etc), leading to some referring to the 'Sopwith Zoo'.