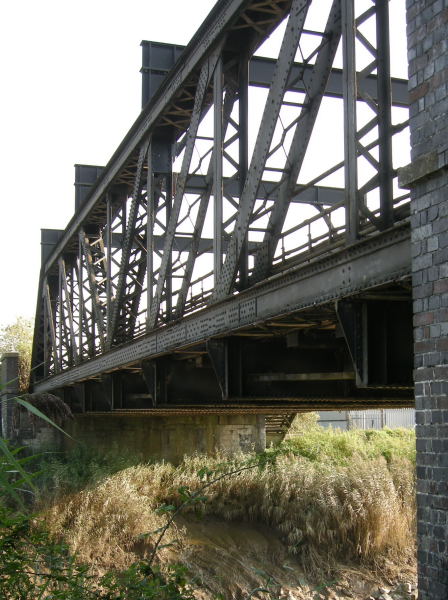 The 1904 bridge. At the far side, the light-coloured stone of the original abutments can be seen

On the southern edge of Bridgwater the Bristol and Exeter Railway had to cross the River Parrett, which was still a navigable river in those days.

Isambard Kingdom Brunel designed a brick bridge with a 100 feet span but a rise of just 12 feet. This was a flatter arch than on his noted Maidenhead Railway Bridge across the River Thames, which had a rise of just over 24 ft with a span of 128 ft.[2]

Brunel left the centering scaffold in place as the foundations were still settling but was forced to remove it in 1843 due to dangers to navigation. He demolished the masonry arch and replaced it with a timber bridge within six months without interrupting the traffic on the railway.

This was in turn replaced in 1904 by a steel girder bridge.

The tender of Samuel Bromhead for construction was accepted on 12 June 1838, and a contract was placed shortly afterwards. Work did not start until October.

By July 1839 the coffer-dams were complete, and piling for the south abutment foundation was almost complete. A grillage of baulks of timber was to be laid across the piles, with another layer of baulks laid at right angles. A drawing shows 12-inch square piles, driven 28 ft below the underside of the grillage.

In August, Bromhead erected a temporary bridge across the Parrett. Pile driving on the north side was delayed by problems in getting the coffer-dam watertight.

By Spring 1840 the south abutment was almost up to its full height, while on the south side the abutment was above springing level. In mid-July work had started on the wooden centering, through which a clear passage for boats was left. The arch was keyed in in December 1840 after a delay due to shortage of building stone. However, the northern land arch had to be taken down, presumably having failed structurally, to be rebuilt when the weather improved.

By September 1841 rumours were circulating that the bridge was unsafe: at the General Meeting that month Brunel affirmed that there was 'not the slightest foundation' for a rumour that he had 'condemned' the bridge. The centering was still in place despite objections from traders whose boats used the river.

Work continued on constructing the approach embankments, and then work on the bridge recommenced in March 1842, and the centering was eased a little at the haunches. Easing continued, and by mid-May it was not supporting the arch, although it was still in place. By early June the down line of rails had been laid (on sawdust in troughs, doubtless to reduce vibration). The line was officially inspected in late June, and subsequently opened to traffic.

Several accidents on the river resulted from the presence of the centering. On 3rd September a boy was drowned as a result of a barge being forced broadside against the centering on a rising tidal current. The jury citicised the B&ER for having left the centering so long in position. In February 1843 two loaded barges struck the centering and sank, with no loss of life. In July two boys drowned when the boat on which they were passengers struck a fender protecting the centering, and sank. The inquest jury returned a verdict of manslaughter against all thirteen Directors of the B&ER. The Board directed Brunel to remove the centering. (In January 1844 the Court of the Queen's Bench quashed the inquisition and verdict of the jury).

Brunel reported that although the arch was sound, the abutments were continuing to move, almost imperceptibly, and in accordance with the demands of the Directors, the centering would be removed, 'at the sacrifice of the present arch'. The removal of centering and masonry began in or about October 1843, the bridge to be replaced by a timber bridge with three laminated trusses. The Western half was removed first, and trains used the eastern side while two of the three wooden trusses were installed. The modified bridge, of 102 ft span was ready for use by 1 February 1844.

The bridge, which lasted from 1844 to 1904, had three trussed 'arches' whose main members comprised beams of approximately 15" by 30" section (pairs of ~15" square section bolted together). The 'knees' had cast iron socketed joints, and the beams were spring from the abutments in socketed iron castings.[4]