1945. Radio. Exhibit at the Ceredigion Museum‎. 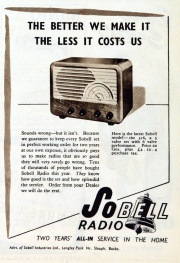 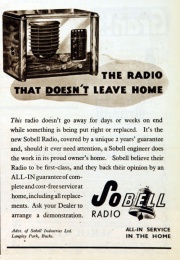 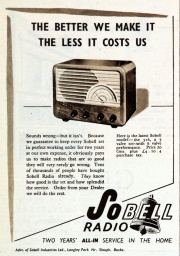 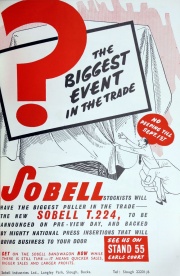 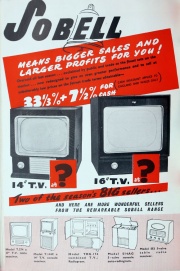 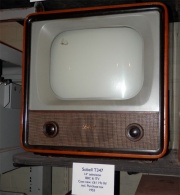 Finding that he could not satisfy this demand with imports, Sobell opened two factories, one for refrigerators and the other for wireless sets and radiograms, at Stonebridge in north-west London.

When the Stonebridge factories (by then producing electrical equipment for the armed forces) were bombed during the Second World War, production was transferred to Amersham.

1951 A specially constructed Diesel van, which Sobell Industries Ltd. put into service, was designed to transport safely loads of up to 200 television receivers on a double deck arrangement. It is hoped that it will materially assist in ensuring speedy deliveries.

1951 In March, Sobell Industries contracted with Great Universal Stores (GUS) to supply annually from 50,000 to 150,000 television receivers over the next five and a half years. GUS insisted on a clause whereby GUS could cancel its contract if the government tightened hire-purchase regulations.

1952 The contract was duly ended when such restrictions were imposed. Sobell declined a revised contract proposed by Wolfson of GUS. GUS instead offered the order to Electric and Musical Industries (EMI) to supply under their Columbia brand, and EMI subcontracted this order to Sobell, but without the cancellation clause. When GUS later cancelled the contract, with EMI following suit, Sobell was entitled to claim damages.

1953 However, he proposed a settlement as an alternative to litigation. This deal was finalized, with EMI purchasing his company for £300,000 but Sobell re-purchasing the factory and plant for £75,000.

1954 Sobell and his son-in-law Stanley Rubin contracted to run the old business on EMI's behalf for six months until March 1954, when Sobell recruited his younger son-in-law, Arnold Weinstock, into the business. Subsequently the return of the Sobell trade mark was negotiated in return for paying EMI a future royalty of 4 per cent. Sobell resumed manufacture in 1954 under the name Banner Radio and Television Ltd.

1955 By March, all Sobell Industries' trade-mark rights had been recovered for a total of £78,750. The name of the company was later changed to Radio and Allied Industries.