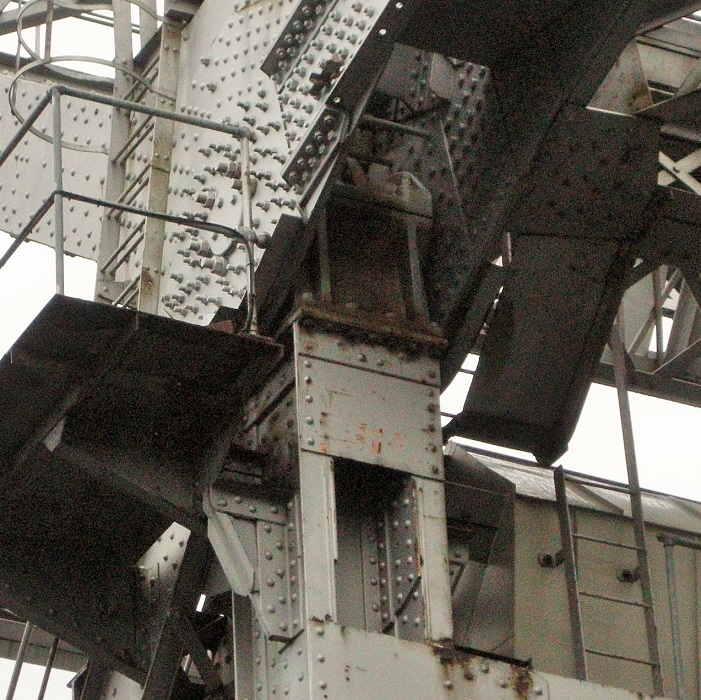 Skansen Bridge (Skansen jernbanebro) is a 52 metre span bascule railway bridge located at Skansen, close to the centre of Trondheim, Norway. Opened in 1918.

Compared with other types of bascule bridge, Strauss's design is probably economical in its use of steel, but it has the drawback of requiring five pairs of main pivots.

A railway application is much more challenging to the designer of movable bridges than is the case for road bridges. Alignment in all planes is critical, and there are more severe constaints on the expansion allowance. A further complication on the Skansen bridge is the need to accommodate overhead power cables.

In photo 2, note the triangular frame whose left hand corner is supported on the river bank on rollers (see photo 4), while its right hand corner is fixed on a pier (see photo 3). Photo 3 also shows the pivot point of the lifting span.

This triangular frame is the only part which remains stationary. At the apex of this triangular frame is one of the bearings (photo 5) for the structure which supports the concrete counterweight. Fig. 6 shows the horizontal member which connects the counterweighted assembly to the lifting span and provides the raising and lowering action. On the underside of this horizontal member is a rack which engages with a pinion in the trunnion. The trunnion also contains rollers to support and guide the member.