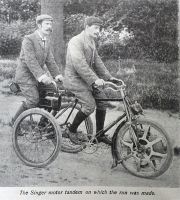 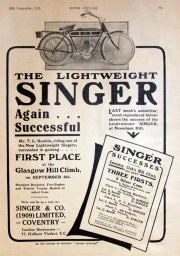 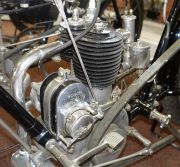 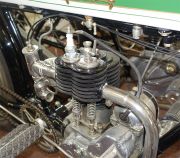 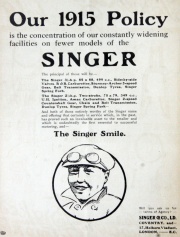 Note: This is a sub-section of Singer

1900 Started by offering a 222cc four-stroke single (the engine design was bought from Perks and Birch, formed by former employee Edwin Perks, and Harold Birch). Used in the Motor Wheel.

1900 Description and illustration of their 2hp model in 'The Engineer'. The patent of Perks and Birch. [1]

1901 The firm began using the Perks and Birch motor wheel. It replaced the front wheel of their tricycle, or the rear wheel of a bicycle, that they were already producing. It was, reportedly, incredibly uncomfortable, as the wheel banged into every pothole and bounced over every bump.

1903 Their versatile design was used as a rear wheel on a Phoenix Trimo forecar. Later that year an open-framed ladies' model appeared. To improve access, it had spokes on only one side. With a freewheel in the drive, it had no engine braking and could coast down hills with a dead engine.

1904 New models were added to the Singer range. These had an upright engine mounted in a cradle hung from the downtube. The list was quite extensive with tricycles built for solo or tandem use, as well as forecars, and also a V-twin, two-speed tricar.

1905 All-chain drive and fan cooling was adopted, as was magneto ignition. After 1905 the company turned their attention to cars for a few years.

1910 The Singer Moto-Velo appeared. This was a lightweight model with a Dufaux engine mounted within the main frame.

1912 By this year, Singe had a wide range of machines on their lists. They built a 499cc racing engine, with a four-valve head and water cooling. It was meant to be raced at Brooklands by the Singer rider G. E. Stanley, but he preferred his successful and reliable sv model. Over the next couple of years the range continued, with steady developments.

1914 Late that year, a two-stroke, two-speed, chain-cum-belt driven model, built under Peco patents, was added. It also had Druid forks and foot-boards.

1915 That range continued for a short time but World War I brought production to a close, and after the was was over the company's attention returned to cars.