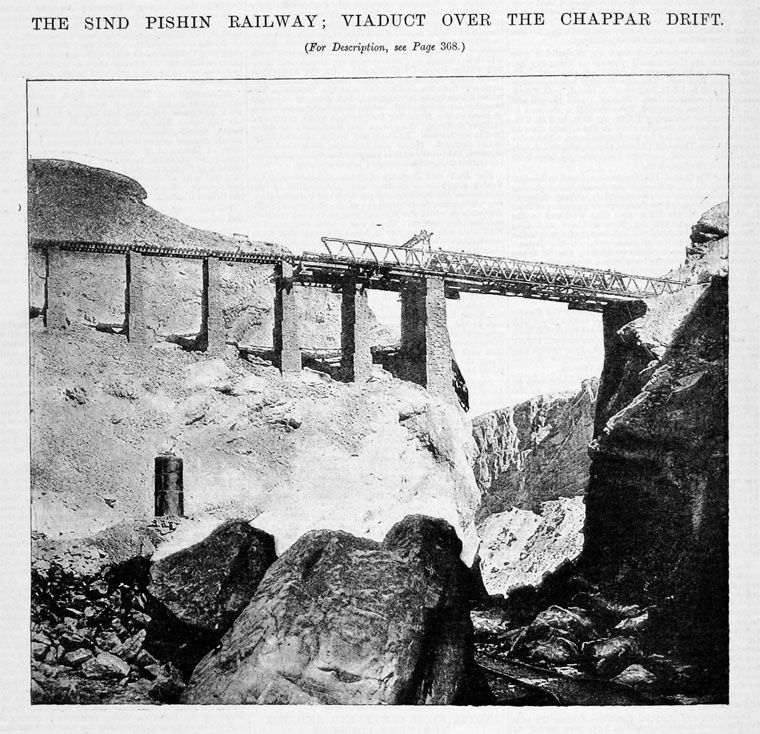 1888. Viaduct over the Chappar Drift. 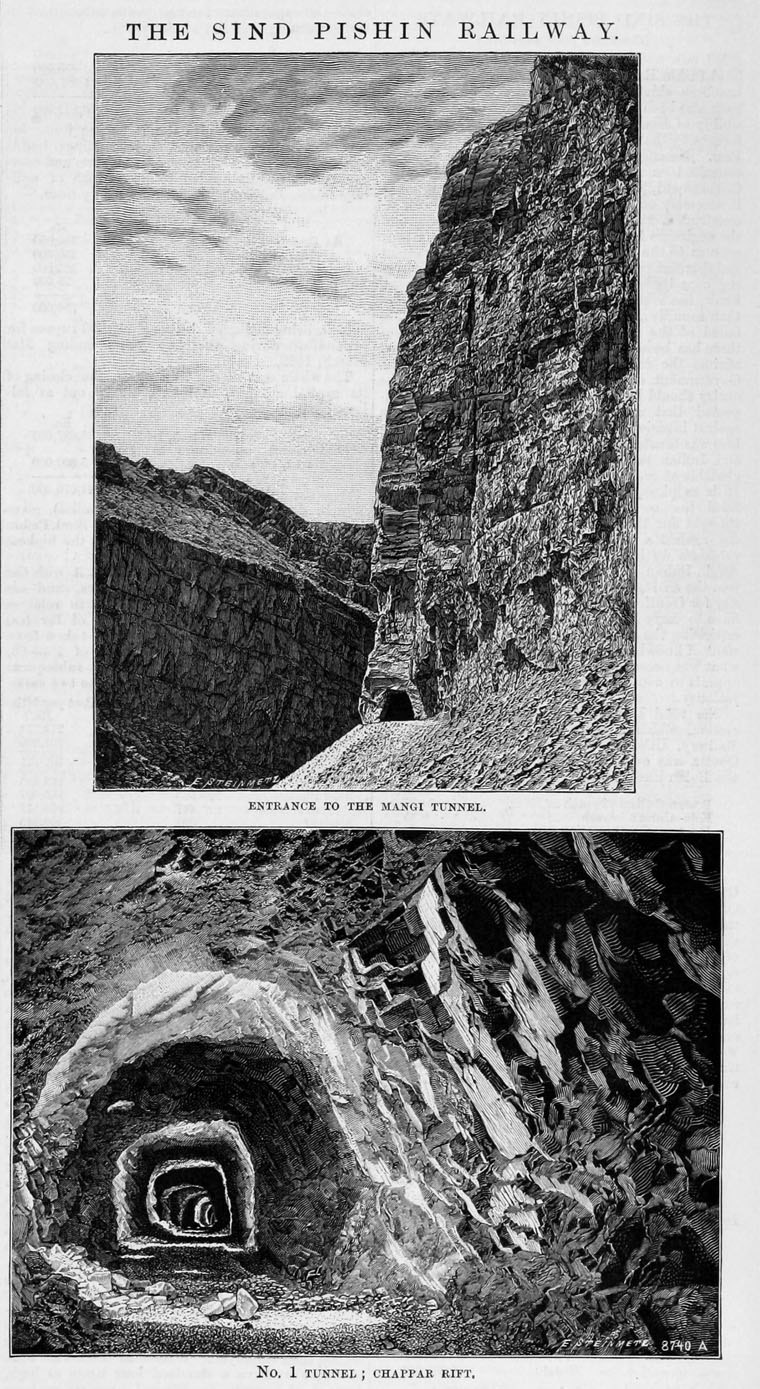 Remains of the Louise Margaret Bridge.

The Sind Pishin Railway was a broad gauge line in India (now Pakistan) that ran up to the border with Afghanistan.

1879 October 6th. First rail laid of the 20 mile section from Ruk to Sibi, at the entrance of the Nari Pass and this section was opened on 14th January 1880. The track of 133 miles had been laid in 101 days across the waterless desert by 5,000 men and their animals.

1880 orders issued for the line to be extended Pishin and to be through the Harnai Pass rather than the Bolan. It was considered that the Harnai was suited to the broad gauge while the Bolan was only possible for a narrow gauge.

1881 April. Afghanistan was evacuated by the British and seeing no further need for the railway, construction was dropped.

1883 The British Government reversed its decision and ordered its re-instatement but in secret and to be known as the "Harnai Road Improvement Scheme". This subterfuge was abandoned in February 1884 and the line was then known as the Sind-Pishin State Railway. Colonel (later Sir) James Browne was in charge of the work.

Commencing from Sibi; at Nari, 500 feet ASL and 459 miles from Karachi, it entered the Nari Gorge through a tunnel and then followed the river by crossing it by six bridges built in Portland Cement Concrete. Then it traversed the Kuchali defile. From Babar Kachh to Harnai it traversed six further bridges, before rising 425 feet in 7 miles between Babar Kachh to Kuchali and then 560 feet in 13 miles between Dalujal and Spintangi. Harnai was 2,950 feet; Nakus 3,362 feet; Sharigh was reached at 3,963 feet then it dropped down to Khost before going up to Dirgi at 4,756 feet. From Dirgi the line rose at 1 in 44 crossing the Chapper Rift to Mangi, traversing a steady 1 in 45 and a series of tunnels and bridges including the Louise Margaret Bridge, which was 225 above the river bed. Four miles on from Mangi was the Mudgorge region which extended five miles to Kuchali, a wilderness of boulders and clay. Through Mudgorge the line was arched because of the land slips and in 1892 and 1893 the slips took away parts of the line and hence the building of the Mushkaf-Bolan Railway section. From Kachh the line descended rapidly and crossed itself near the 566 mile mark, passed through Fuller's Camp and Khanai at 5,487 feet, and reached Bostan at 5,154 feet. There is joined the Bolan Railway from Quetta and turned north toward the Khojak and Chaman. The section from Bostan to Chaman, some 62 miles, opened in january 1888 and fully through to Chaman in January 1892. The main work here was the Khojak Tunnel and was the longest in India.

It was described as: "Starting form an elevation, at Sibi, of 300 feet the line was to rise 6,200 feet in the 120 miles between Sibi and the summit level at Kach. Then for the greater part of the 224 miles to which the line was to extend, the country was a wilderness of rocks and stones - a land of barrenness and desolation, which there was no timber, no fuel, scarcely a blade of grass, and, in places, for stretches of several miles, no water. It was a land too, almost devoid of inhabitants, while those who did dwell there were described as 'a savage and blood-thirsty race of robbers', continually engaged in plunder and inter-tribal warfare, and not growing sufficient food for their own consumption. Almost everything that was wanted including supplies for from 15,000 to 30,000 workers and materials for the line - had to be imported from a distance"[1]

In 1886 it was amalgamated with other railways to form the North-Western Railway.