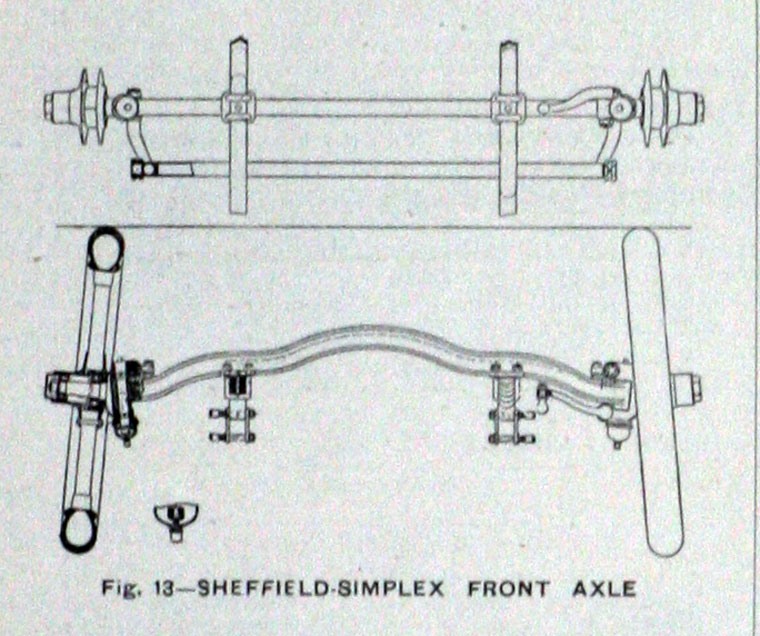 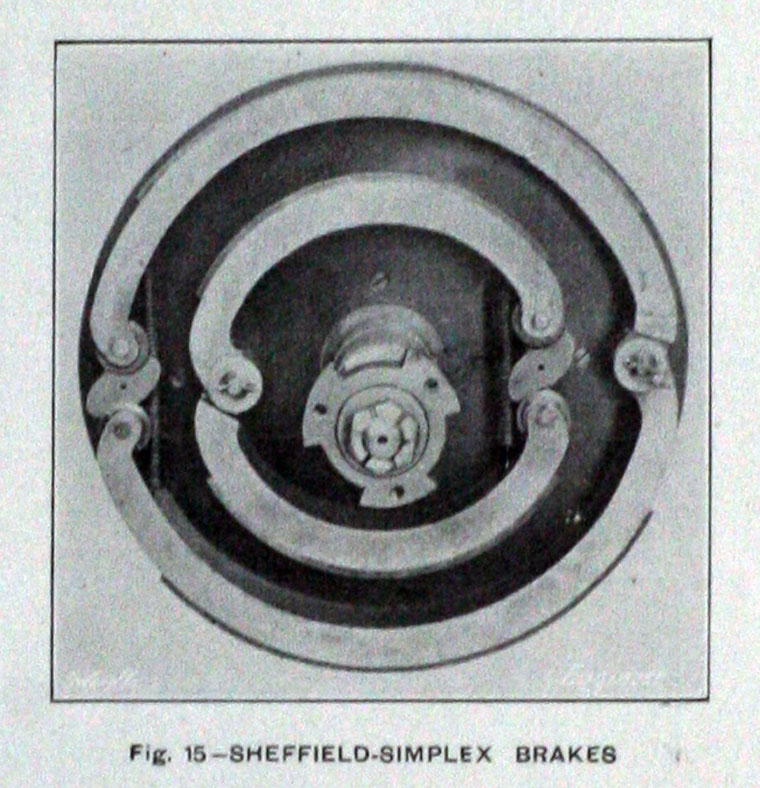 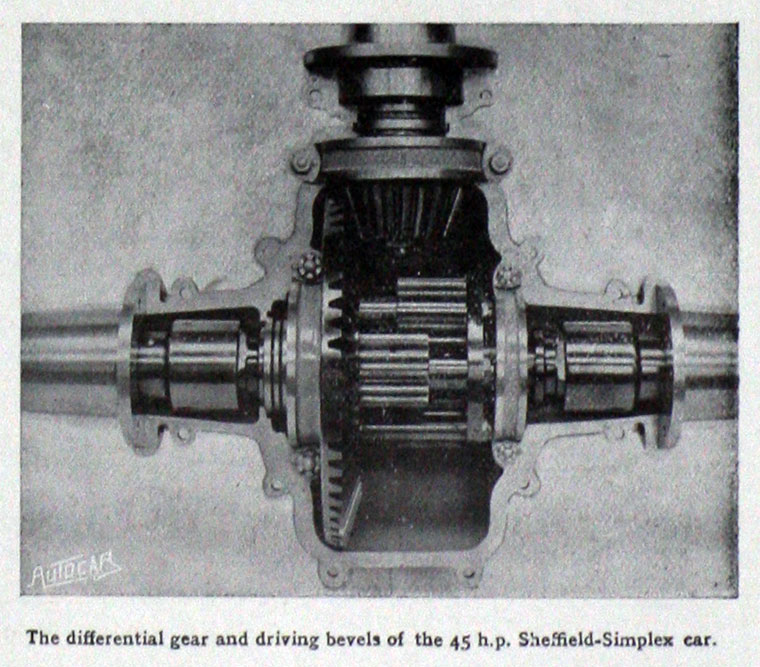 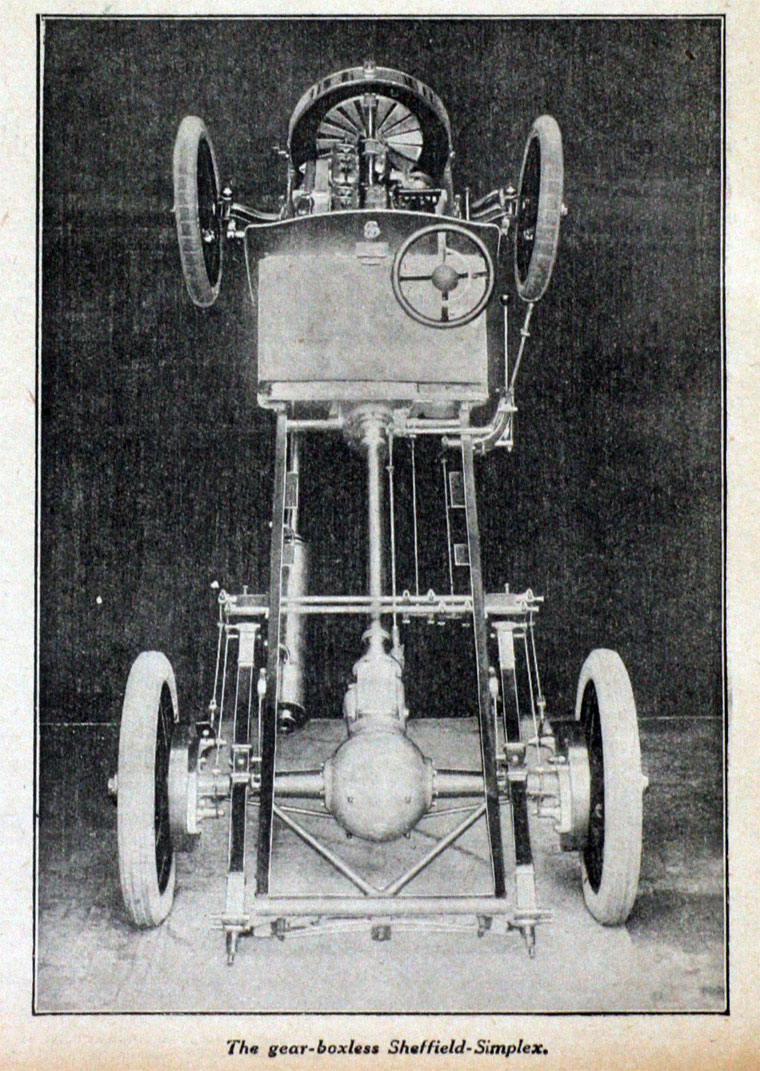 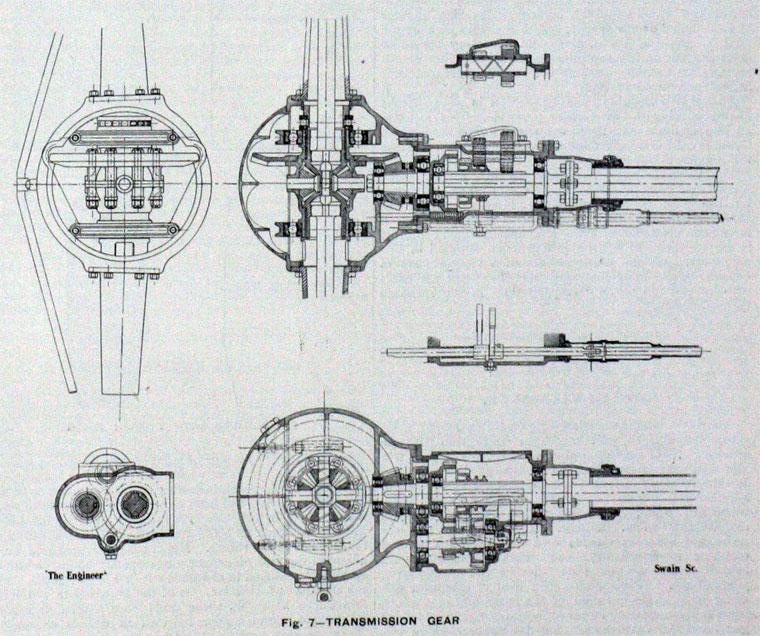 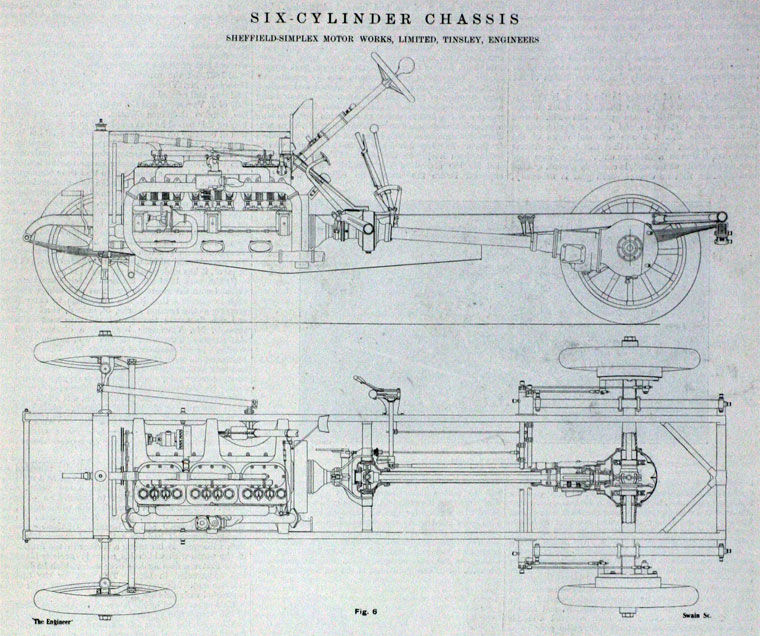 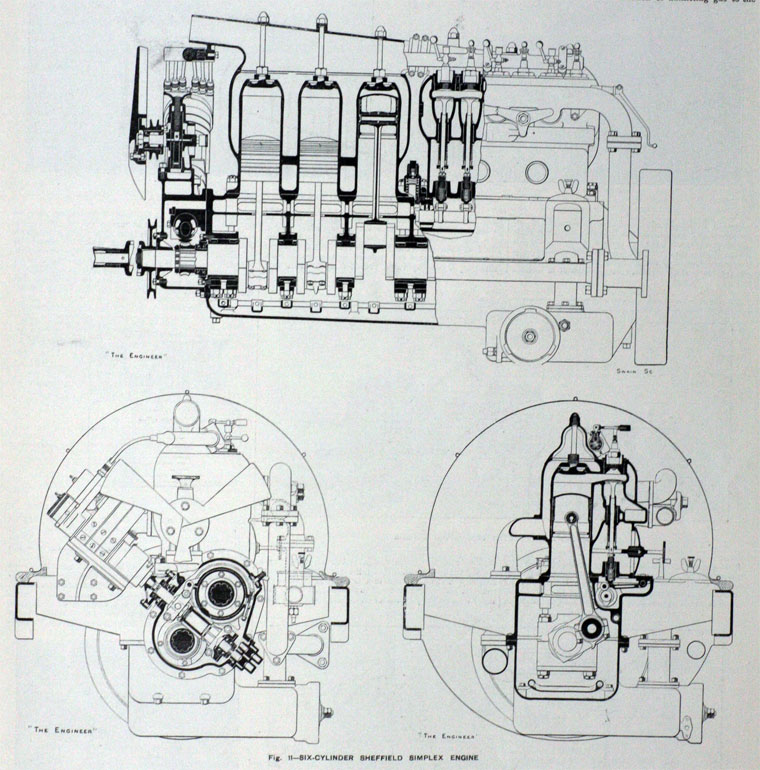 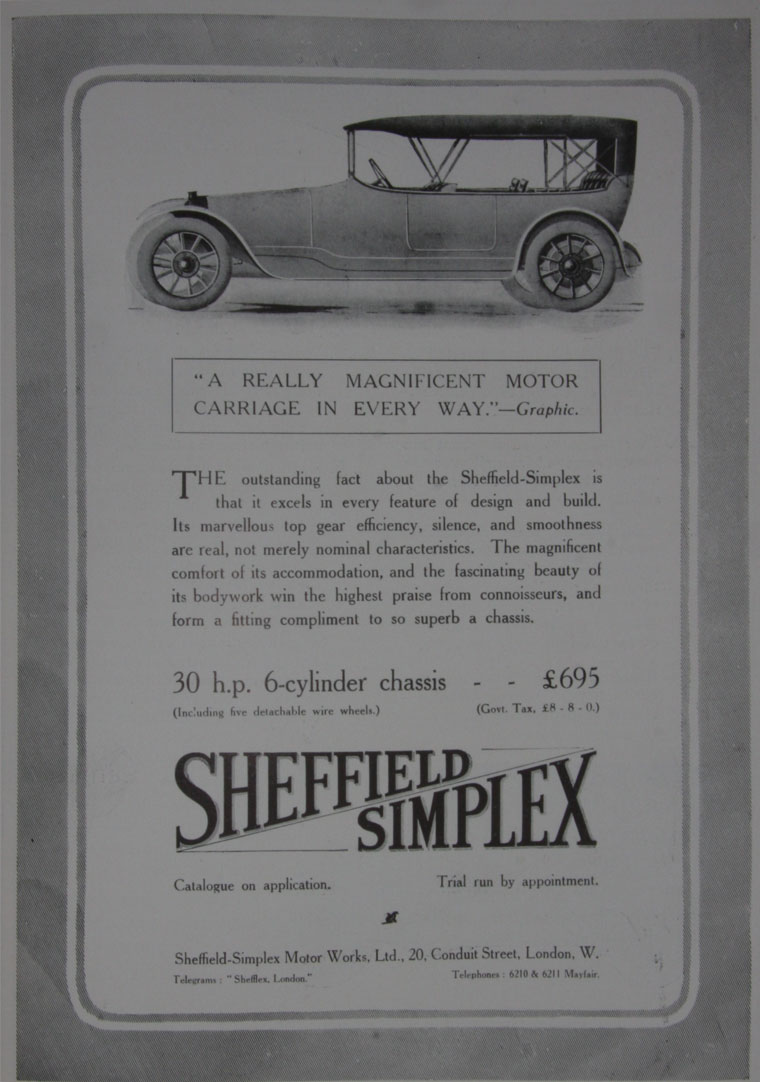 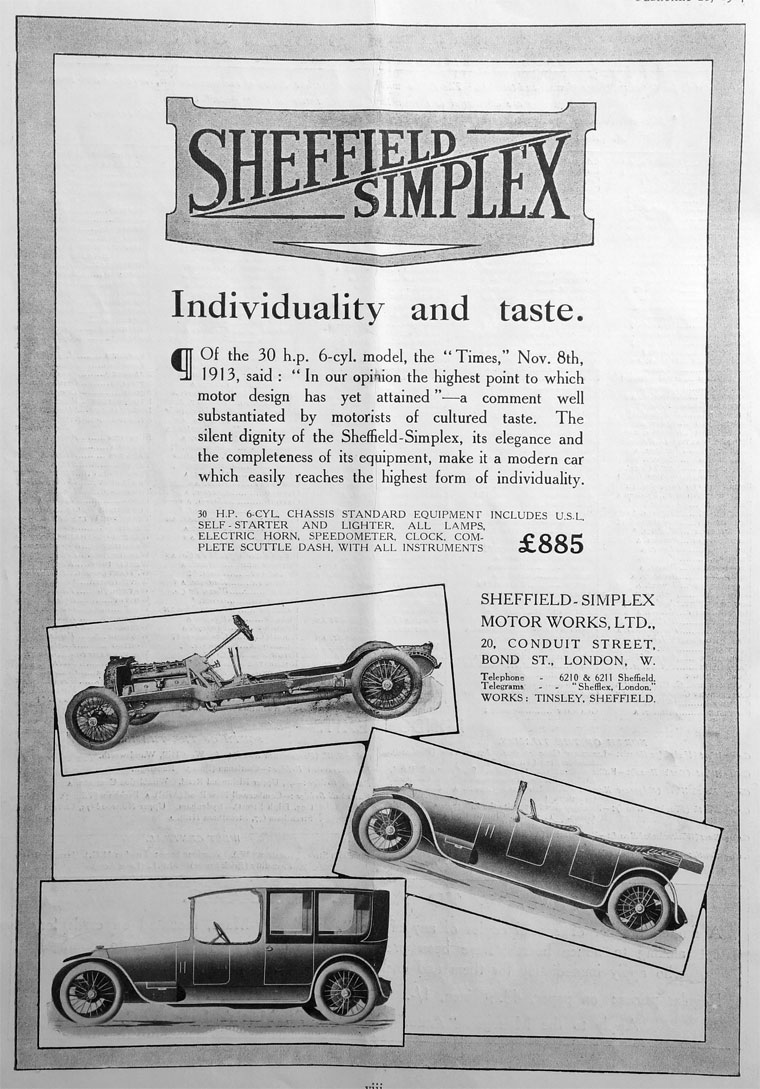 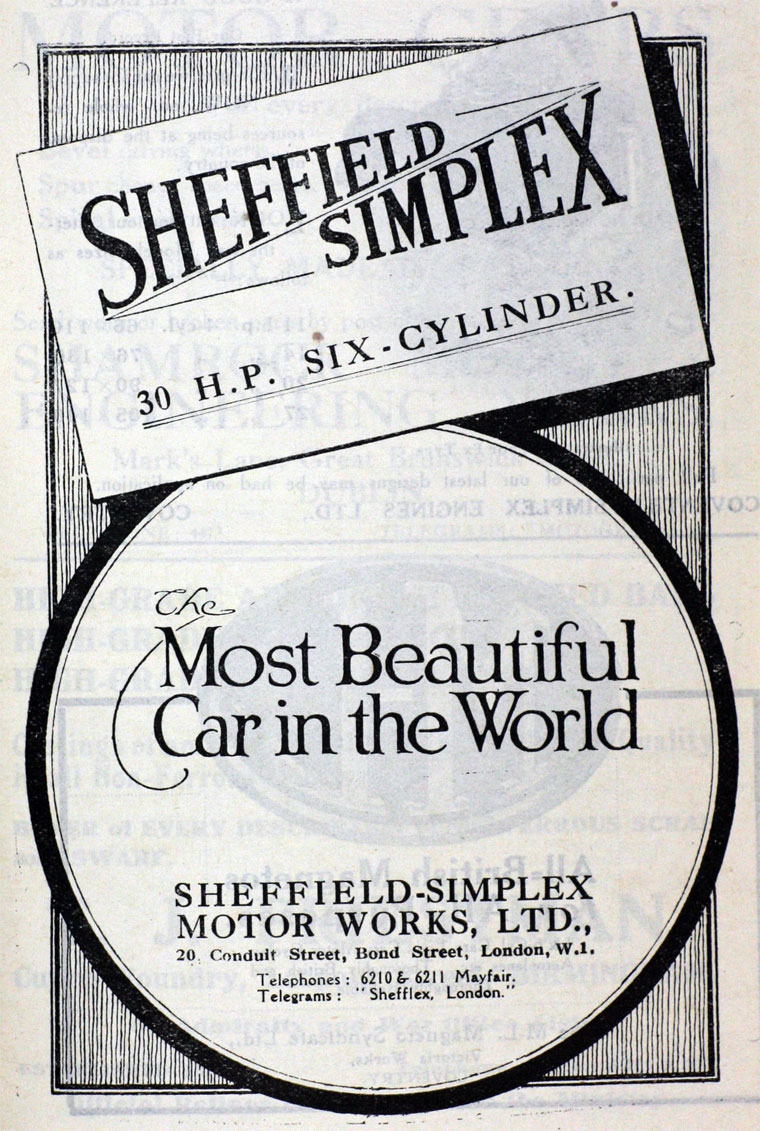 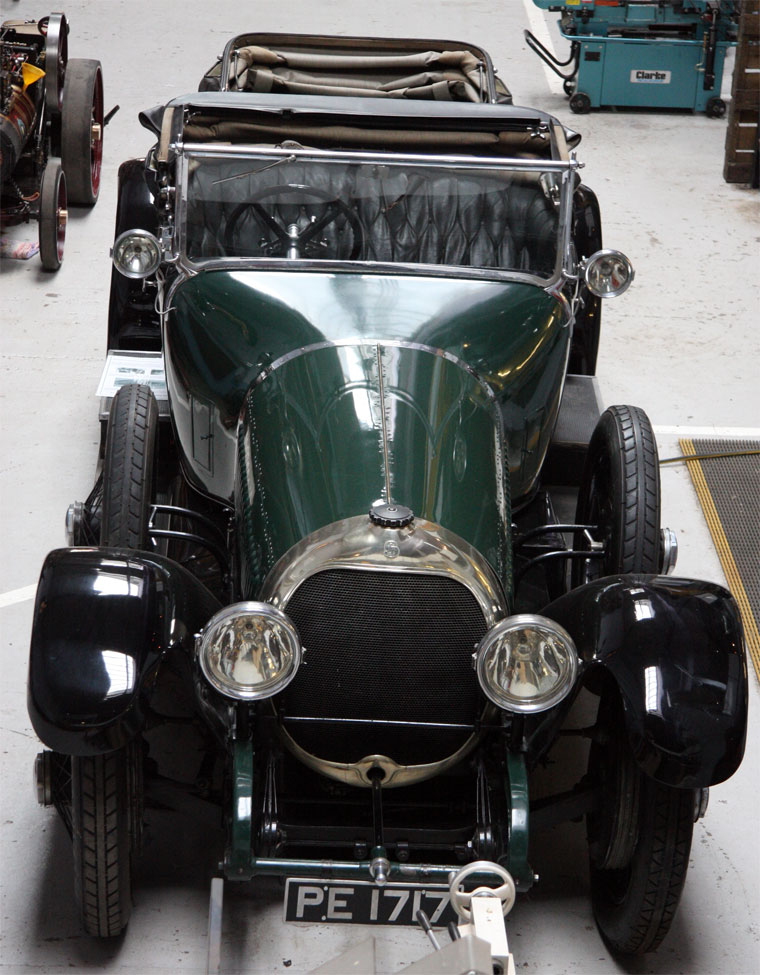 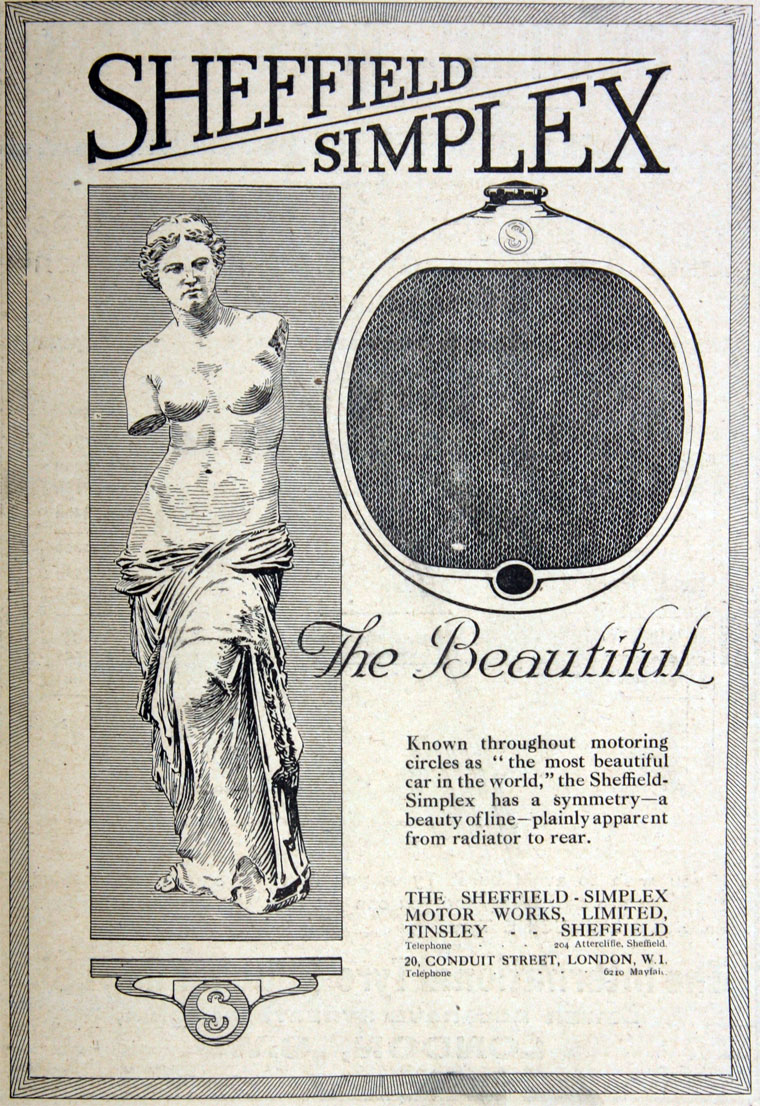 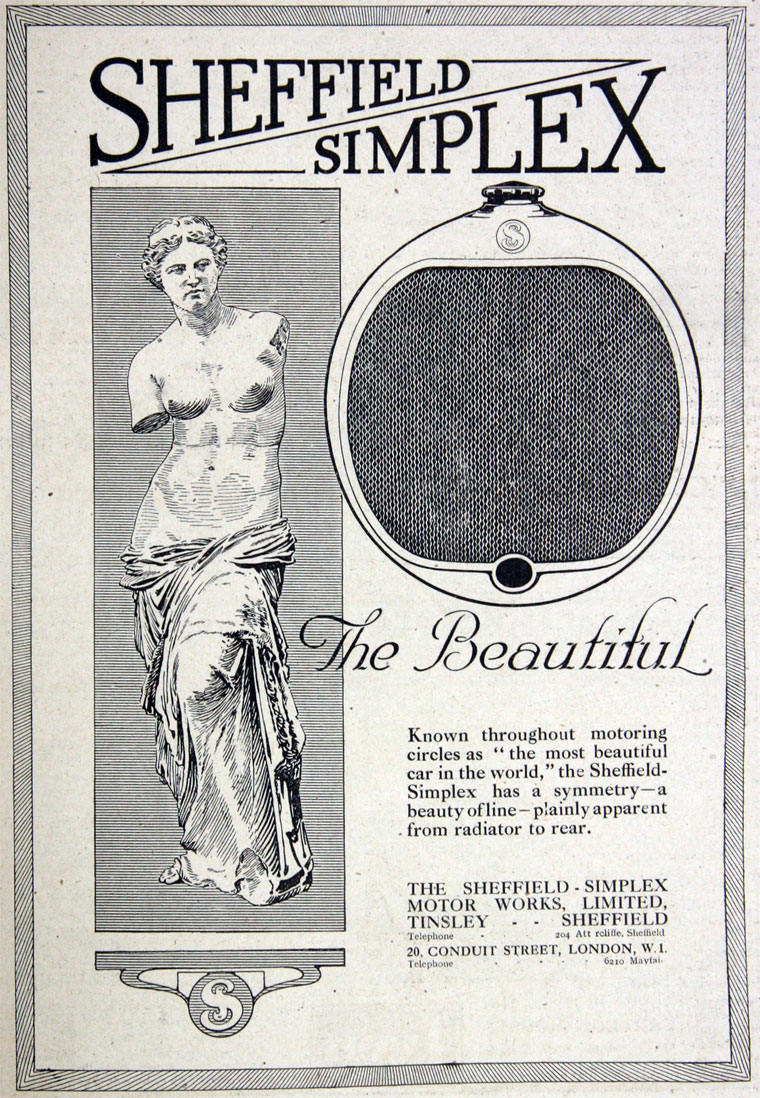 Sheffield-Simplex of Sheffield, and Kingston upon Thames.

The Sheffield factory was located at the junction of Lock Lane and Sheffield Road, immediately west of Templeborough Rolling Mills. It was connected to the Great Central Railway's Sheffield and Mexborough Branch, which was immediately north of the factory [1]

The company received financial backing from the coal magnate Earl Fitzwilliam. The first few cars were called Brotherhoods and were a continuation of the Brotherhood-Crocker cars made in London in which Earl Fitzwilliam had been an investor. Brotherhood sold the London site in 1905 and moved to Peterborough but could not get permission to build a car factory so the Earl suggested a move to Sheffield where he built a new factory in Tinsley.

1906 Olympia Exhibition: Sheffield-Simplex & Brotherhood were together on a stand[3]

In 1908 the first cars to bear the Sheffield-Simplex name appeared designed by Percy Richardson ex Daimler and Brotherhood. The LA1 had a six cylinder 6,978 cc engine and three speed gearbox.

It was joined in 1908 by the LA2 intended for lighter open bodies which did without a conventional gear system.

1911 These cars lasted only one year and in 1911 were replaced by the LA7 with a six cylinder 4,740 cc engine allowing the company to boast that only one other British maker made only six cylinder cars. Sheffield-Simplex considered their only rival to be Rolls-Royce and even opened a London showroom in Conduit Street very close to theirs.

1913 The LA7 was updated to LA7b specification in 1913 and this included electric starting and in 1914 the old LA1 and 2 models were finally dropped.

WWI During World War 1 the company made armoured cars which were supplied to the Belgian and Russian armies, ABC Wasp and Dragonfly aircraft engines and munitions.

1919 Car production recommenced in 1919 with the LA7b but now called the 30hp but few were sold and it was replaced by a new design, the 50, in 1920. This had a new engine of 7777 cc with each of its six cylinders separately cast. It appeared at the London Motor Show in that year fitted with a two seat body and again in 1921. It is quite probable that it was the only one made.

1920 November. Exhibited at the Motor Car Show at Olympia with a new chassis with six-cylinders and a 48.3 hp rating

1923 As well as cars the company built Ner-A-Car motor cycles and opened a factory in Kingston upon Thames. This unconventional machine was designed by American Carl Neracher and had a very low chassis dropping down between the wheels. Production continued until 1927.

The final years of car production are a mystery and it seems likely that few were made post World War 1 and final production might have been in Kingston. About 1,500 cars were made in the company's history.