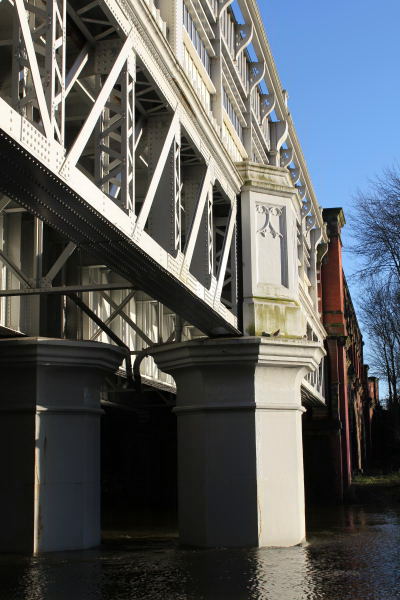 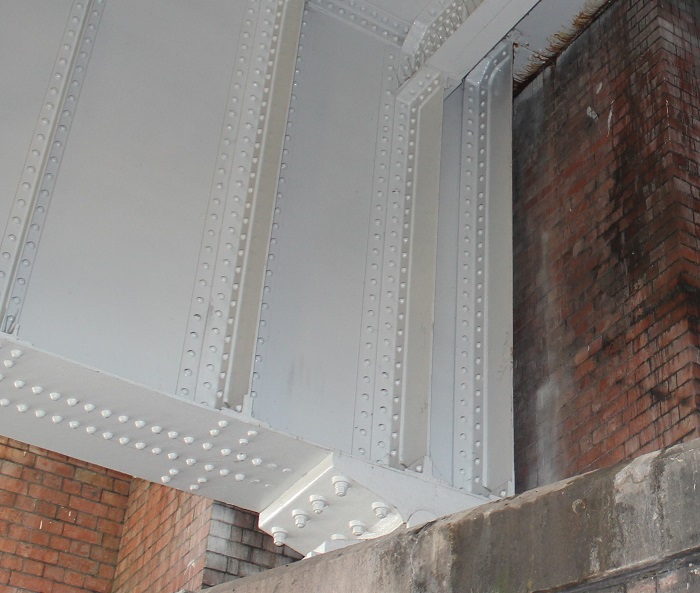 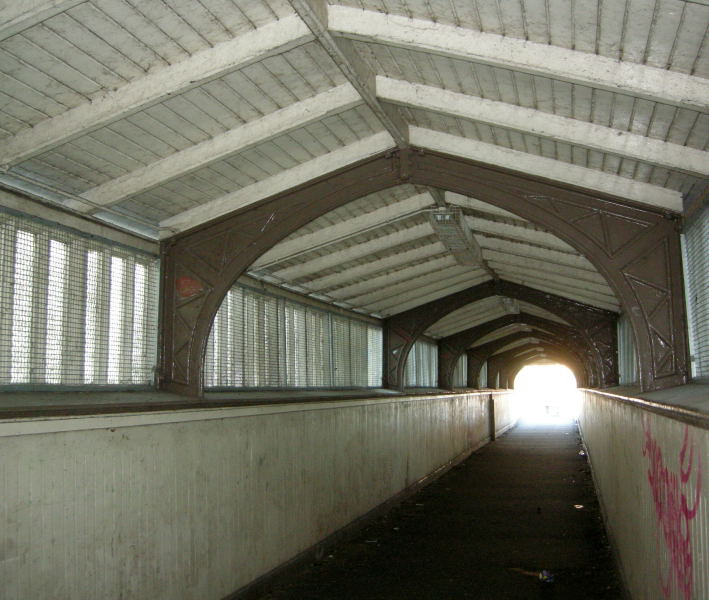 As in many towns and cities, the railway lines are elevated, providing us with a legacy of old bridges and viaducts. Often these are taken for granted, but iron and steel bridges are occasionally brought into prominence when they are freshly painted. Such is the case with the bridge at the south end of the station, which carries the tracks and some extended platforms over the River Severn.

The original four-arch sandstone bridge is flanked by newer bridges with deep plate girders, supported at mid span by large cast iron piers. The piers are not in a straight line, the great width of the structure necessitating placement of the piers corresponding to the curved course of the river. The outermost girders of the bridge are of the truss type, supporting large glazed screens.

The girder bridges would have been installed in 1899-1903 when the station was enlarged.

Photos of the south end bridges are prefixed 'S'.

Another group of girder bridges at the northern end of the station carry the tracks over Castle Foregate, presumably installed in 1899-1903. Not much to gaze at here, apart from western flank which has a large glazed screen supported by a truss girder.

A public footpath crosses the station platforms by a long footbridge of the Warren truss type. This is known as the Dana footbridge. The walkway is fully enclosed, with glazed windows, a roof supported by cast iron arches, and wooden tongue-and-groove panelling fixed to a strong framework comprising horizontal and vertical wooden members of square section (see photo D4).

1862: 'The Dana. — We observe with great satisfaction that the lamps intended for lighting the foot-bridge over the railway at the Dana have been removed from their former position, as we a short time since suggested, and are now placed at either end of the roof, which covers the bridge that the whole place is lighted from one end to the other. This will be a source of satisfaction and accommodation to the inhabitants Castle-fields, as this is almost the only approach from town to that district. It is a step in the right direction ; and we could wish that the lamps at the north side ot the Gaol were placed that their light would not be obscured by the hoisting machine at the Shropshire Union goods station, and the jutting portions of the wall which separates the railway from the thoroughfare. We feel assured that the borough surveyor will, on passing in that direction, see the justice of this observation and the necessity for the matter being attended to.'[1]

The railway line runs south from Shrewsbury Station on an embankment and masonry viaducts, crossing Abbey Foregate by a plate girder bridge whose appearance is enhanced by cast iron panels and railings.

1858: 'The Abbey-foregate Railway Bridge. —Persons driving along this much frequented part the town have long felt the danger which almost every hour the day is oocasioned by engines and trains going along the Shrewsbury and Hereford Railway bridge which passes over the road at this place. A memorial, signed by the Mayor and nearly every member of the Town Council, as well as numerous country gentlemen, clergymen, medical men, and others, was presented to the directors on the subject and a meeting at the spot took place last week between the engineer and traffic-manager of the line, on behalf of the company, and the Mayor and Mr. Burd, on behalf of the memorialists. An arrangement was then come to by which the danger will no doubt in great measure be obviated. An undertaking was given by the railway company that the making up of the trains should take place beyond the bridge on the Coleham side, instead of as at present on the embankment between the river and the Abbey-foregate, and that the open space in the parapet opposite the national school should be boarded, so as to prevent the trains being seen by horses upon the road, except when actually an the bridge. The passing of the regular trains of course must be submitted to, but this occurs seldom compared to that of the engines engaged in making up the trains, that the inconvenience will be far less felt. The engine drivers are also to be forbidden, under a penalty, to remain standing upon the bridge under any circumstances whatever. An offer was also made by the railway officials to board up the open parapet of the bridge, but this measure is postponed until the effect of the arrangements promised is tested, as it is thought that the appearance of the bridge would suffer much from the change.'[2]