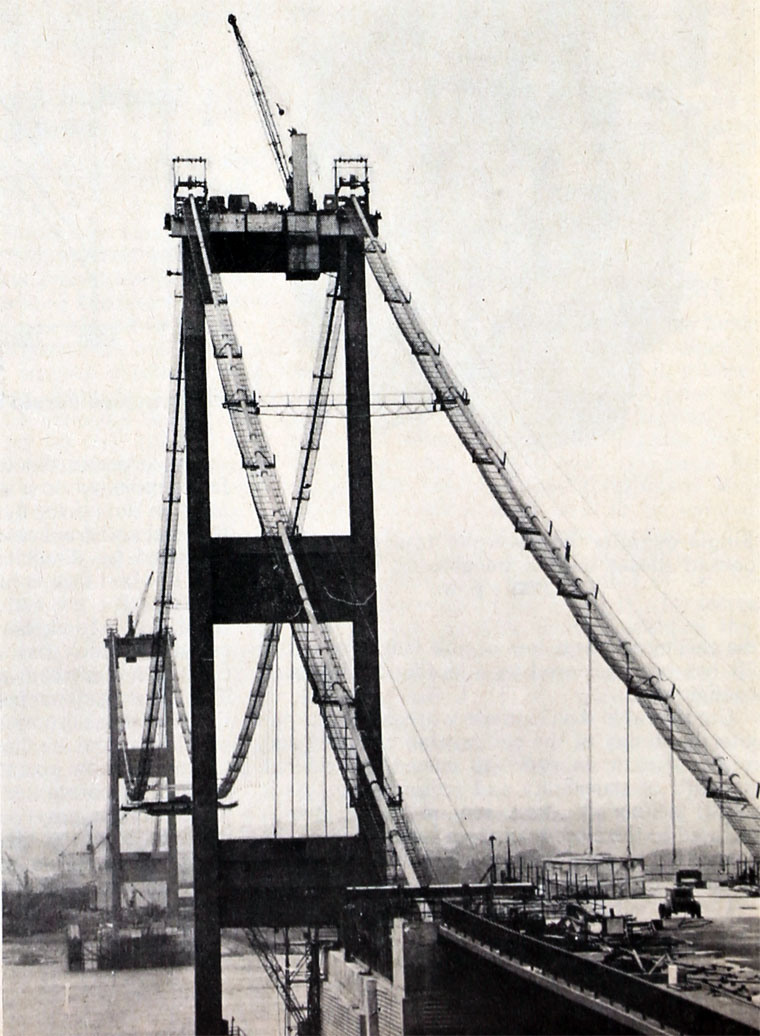 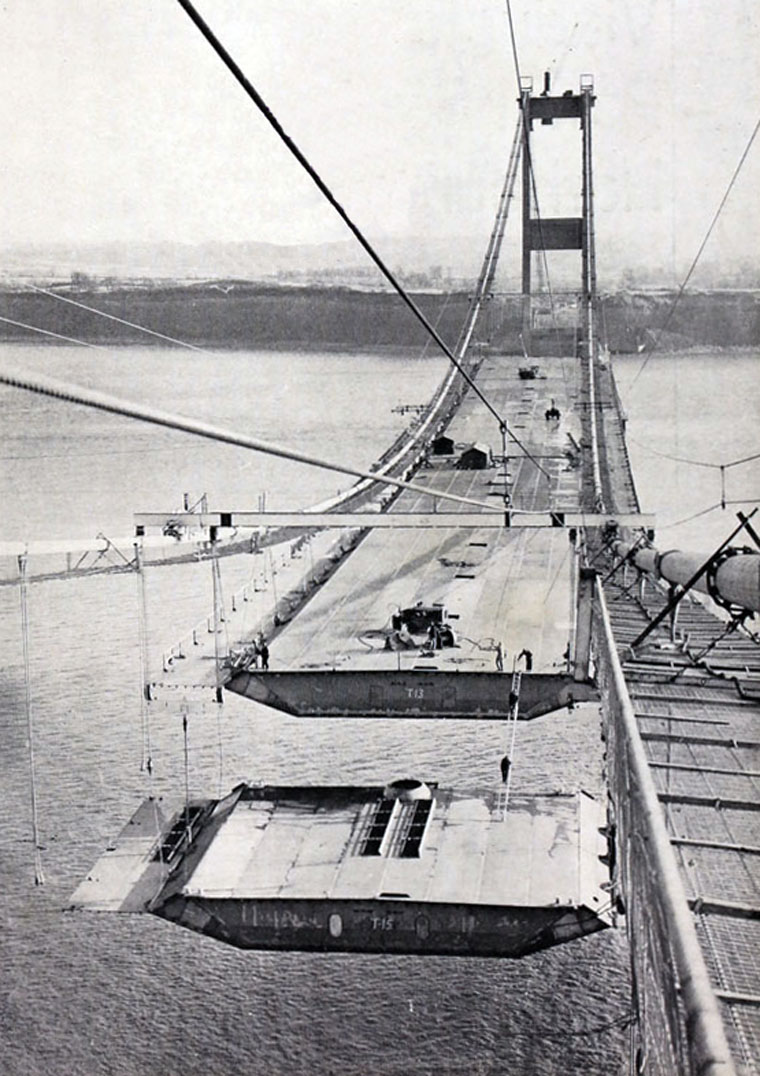 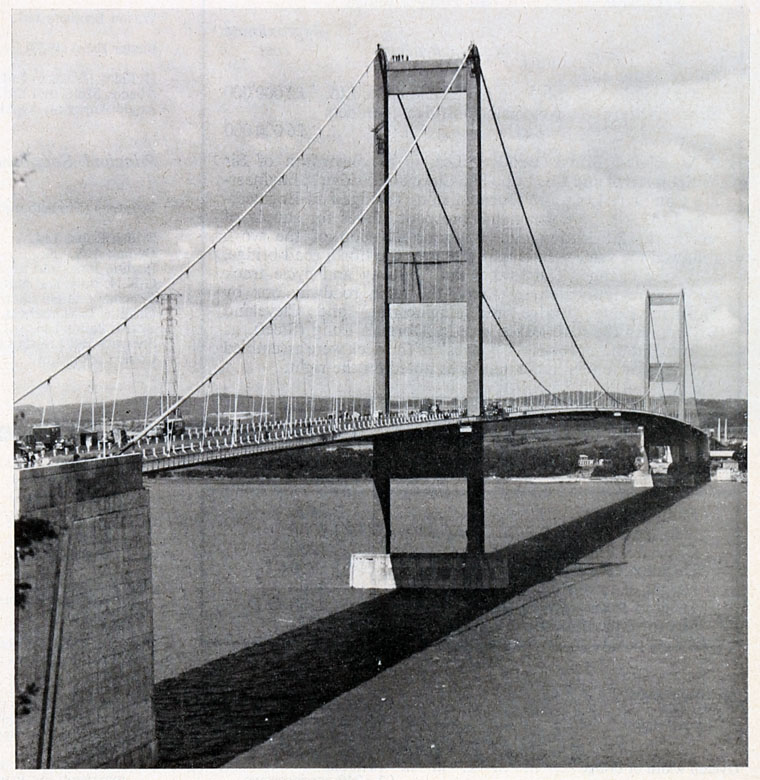 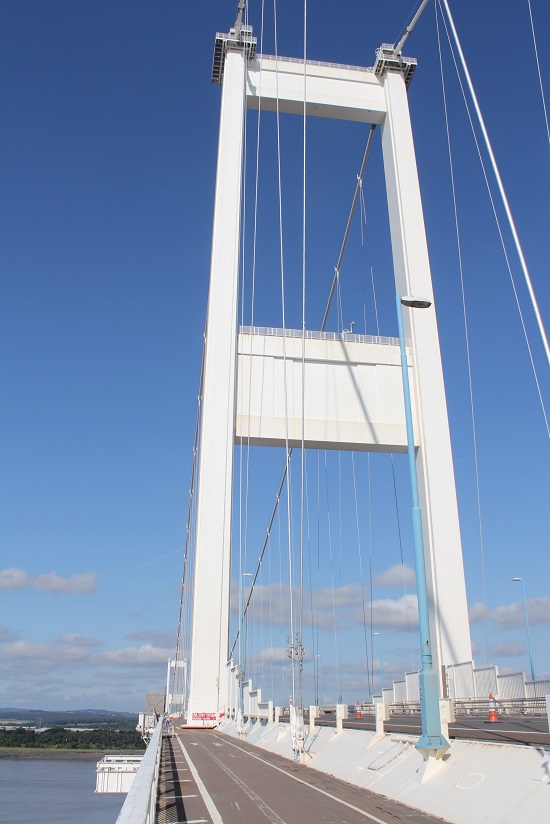 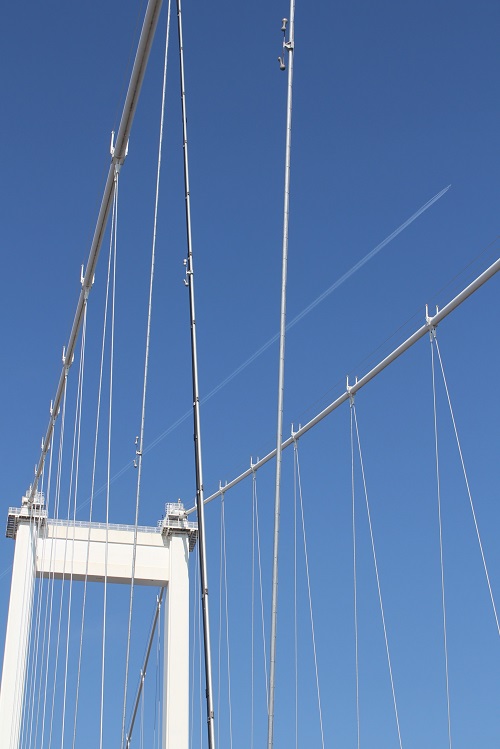 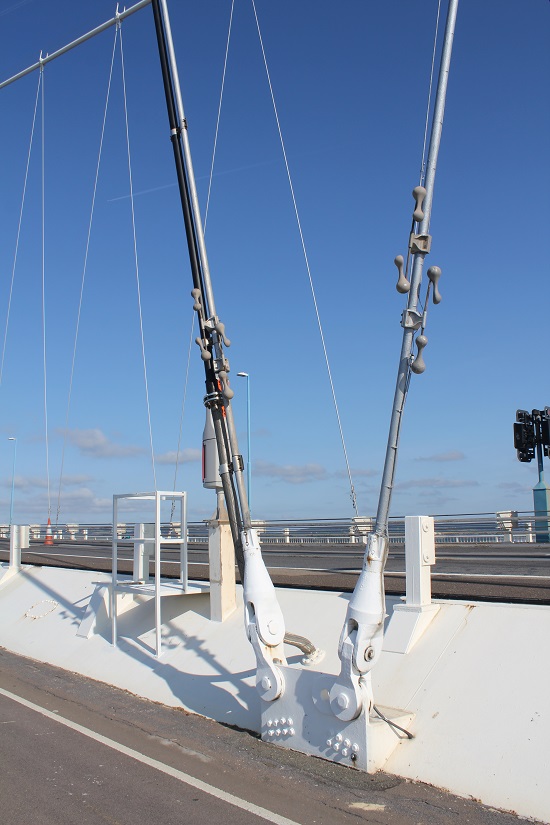 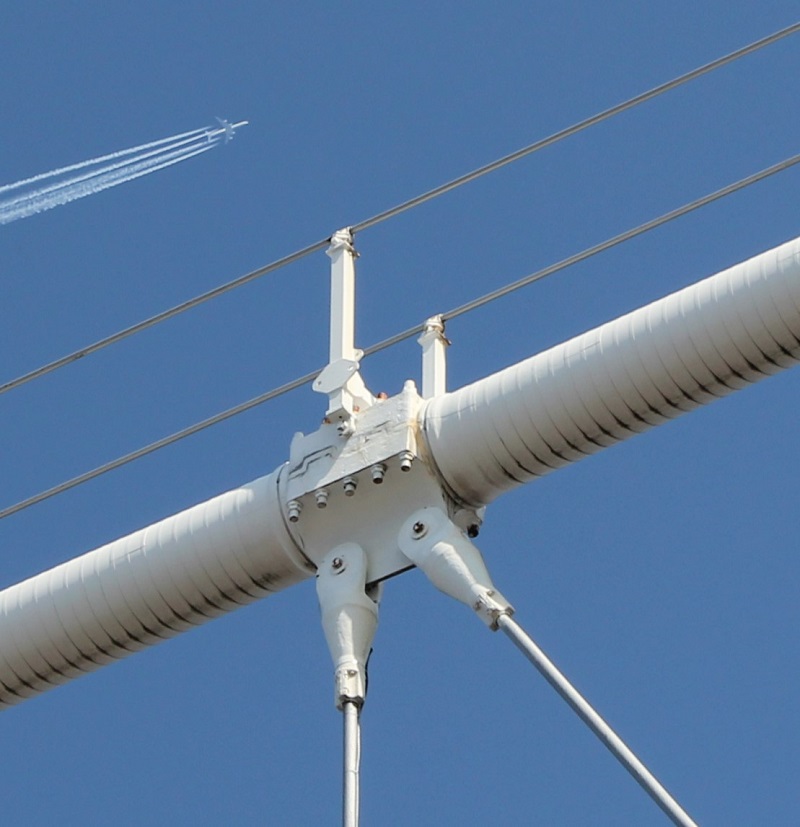 Before WWII, schemes were proposed for crossing the River Severn by road bridge.

After the war, the contract for the construction of the bridge was awarded to Mott, Hay and Anderson and Freeman Fox and Partners. The bridge span would be 988 metres. The major novelty of the design was use of an aerofoil deck form, which saved approximately 25 per cent in weight in comparison with the trussed deck of the Forth Road Bridge (span 1006 metres), and with rectangular box (as opposed to cellular) bridge towers.

A cross-braced truss design had been considered for the Severn Bridge but the destruction of its model during wind tunnel testing provided an opportunity for a successful trial of an aerofoil form.

1961 Construction started on the bridge.

1966 Officially opened by HM Queen Elizabeth II on 8th September. Together with the associated structures of the Wye Bridge and Beachley Viaduct, the Severn Bridge carried the new M4 motorway between England and Wales.

1996 A second bridge, the "Second Severn Crossing", was opened to relieve the traffic pressure on the original bridge.

On Thursday September 8, 1966, The Queen accompanied by the Duke of Edinburgh opened the £8m. Severn Bridge at Aust in Gloucestershire before crossing the bridge and driving over the Wye into Monmouthsire to unveil a commemorative plaque. This was a great occasion amongst all those motorists who for so long have either had to endure the tedious road journey to and from Wales via. Gloucester or have queued for hours to cross the Severn by ferry. The opening of this bridge marks the start of a new era for both South Wales and the West of England. Some have referred to the creation of a little Common Market between the two regions.

The bridge is of course the vital link in carrying the M4 motorway from London to South Wale over the Severn.

The Severn Bridge i the seventh longest bridge in the World and is an example of British skill in design and construction. In fact, in simplicity, design and cheapness it puts Britain ahead of the World in bridge construction and the following detail in its construction makes very interesting reading.

The bridge has two 24-foot-wide carriageways, a 12-foot-wide footway and a 12-foot-wide cycle track. It is designed to withstand wind speeds of 100 m.p.h. The towers are constructed of stiffened plates of welded high tensile steel. Each cable consists of 8 322 wires lying parallel to each other not twisted as in a rope.

The road deck consists of 88 steel boxes 10 feet deep by 75 feet wide the top surface of the boxes forming the carriageways. The sides are tapered to give the bridge a streamlined shape for cross winds. The shallow streamlined cross-section was developed after aerodynamic research and wind tunnel tests. Each section is 60 feet long and the whole deck is welded together. Each section weighs 130 tons and the roads are surfaced with one-and-a-half inches of asphalt.

The foundations were completed between May 1961 and mid-1963 by John Howard & Co. Ltd. Erection of the tower cable and bridge was started in March 1963 by Associated Bridgebuilders Ltd. a consortium of three famous engineering firms - Sir William Arrol & Co. Ltd. the Cleveland Bridge & Engineering Co. Ltd. and Dorman Long (Bridge & Engineering) Ltd.

The box sections were assembled at the Chepstow Shipyard by the Fairfield Shipbuilding and Engineering Co. Ltd. and were launched into the River Wye towed to the Severn Bridge site and then hoisted into position with special lifting gear.