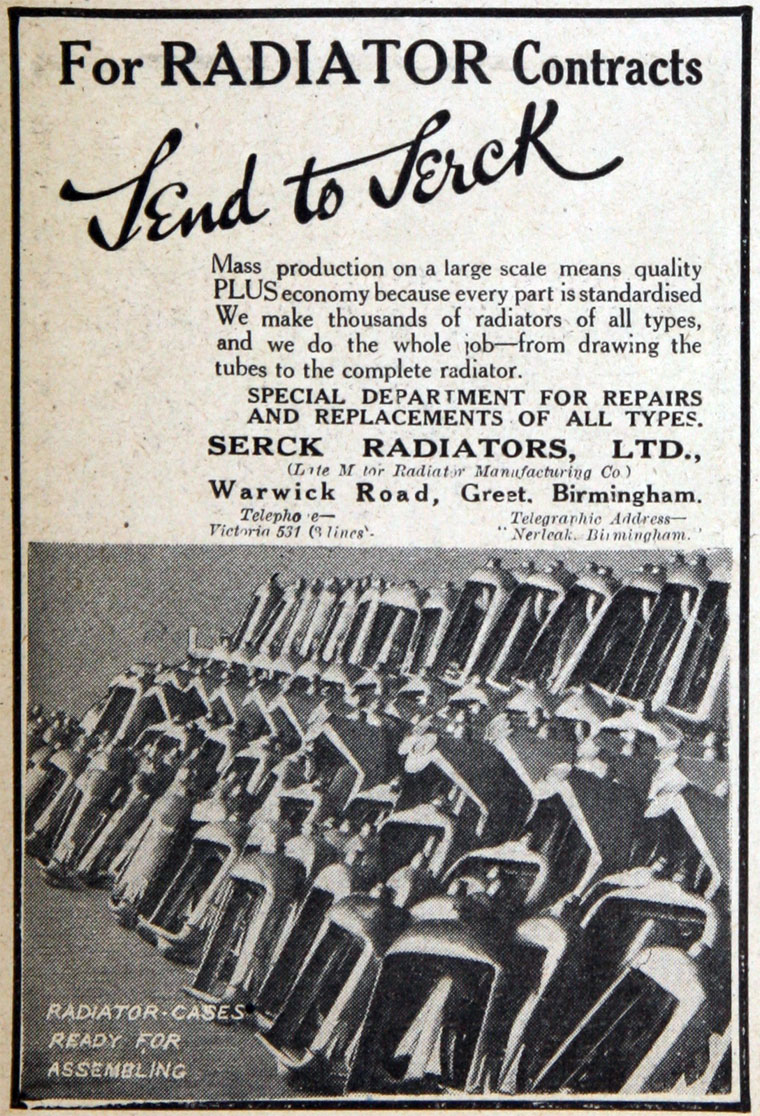 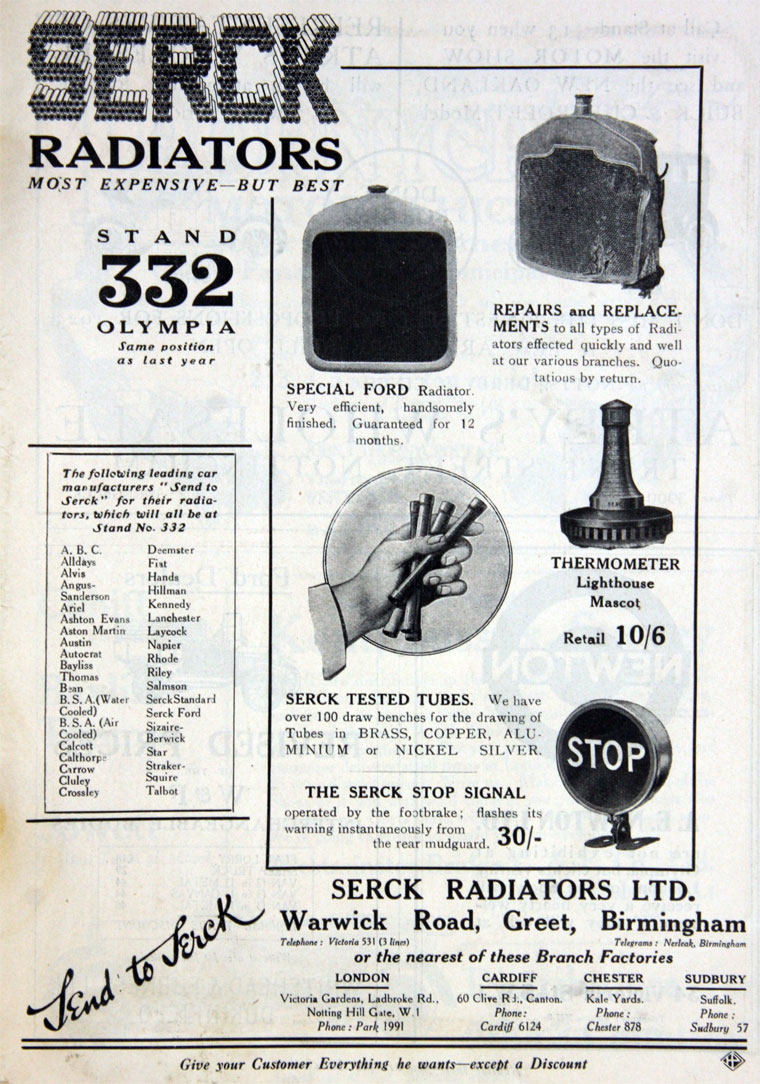 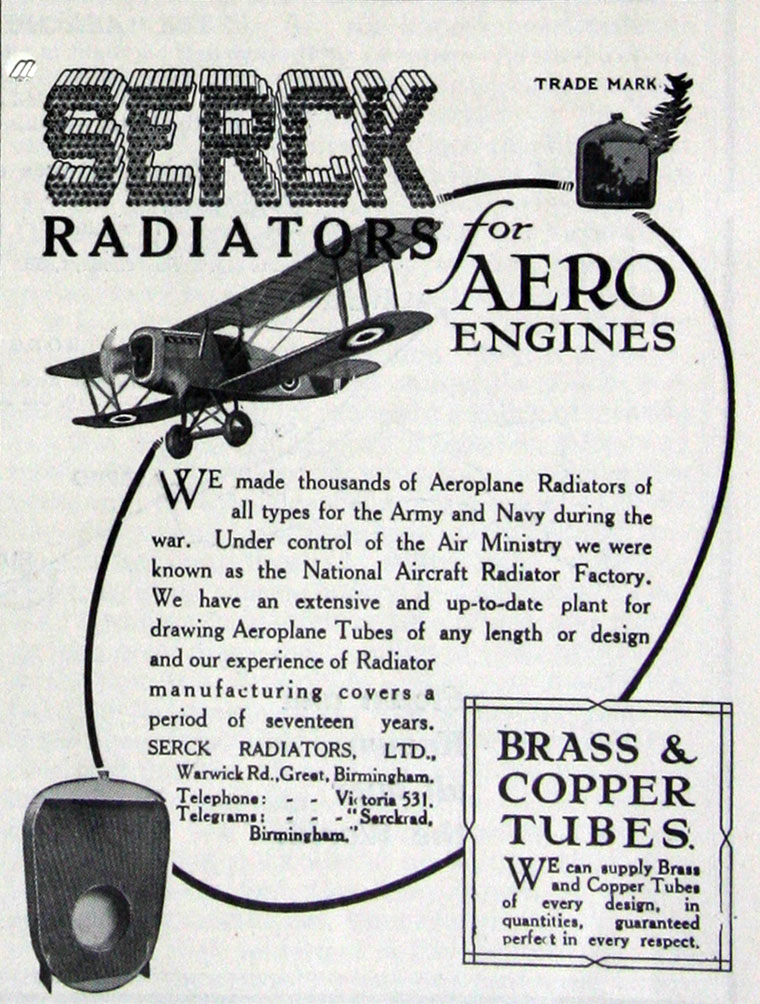 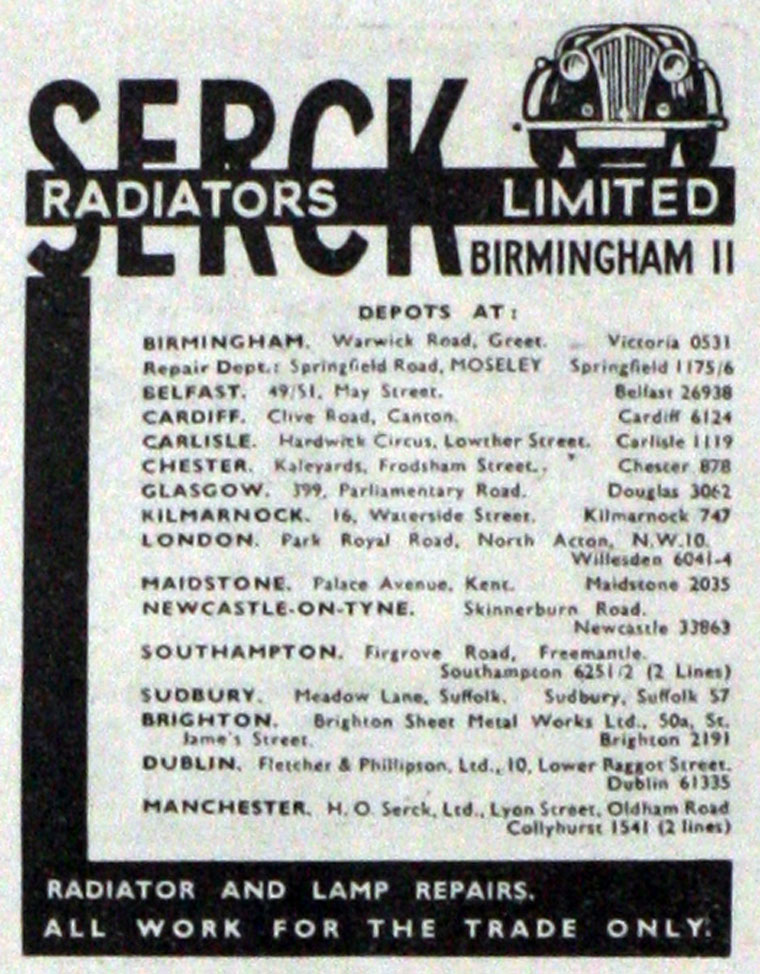 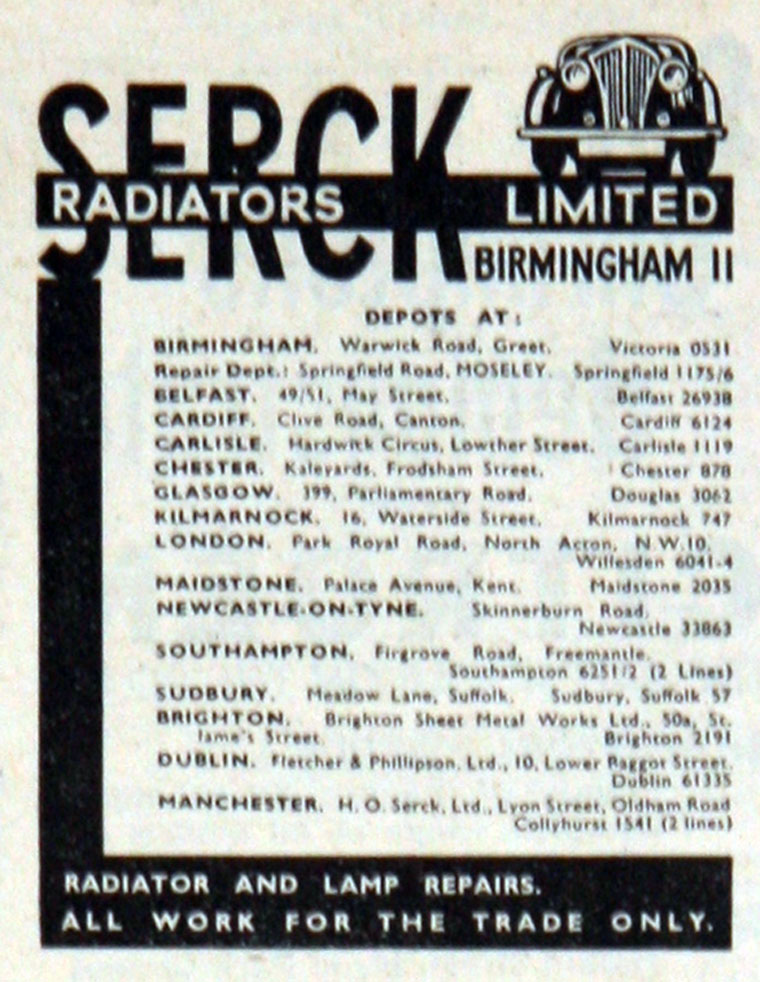 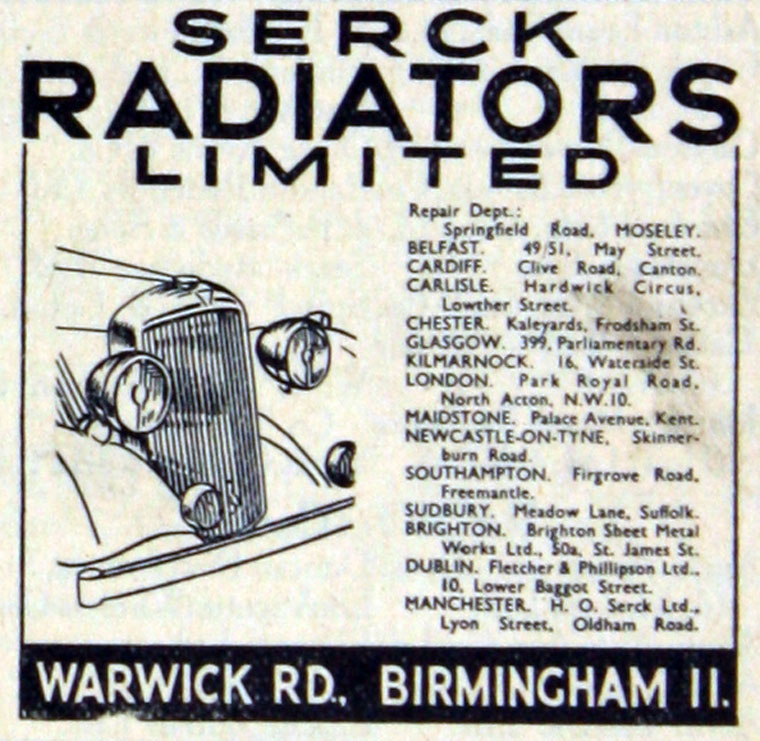 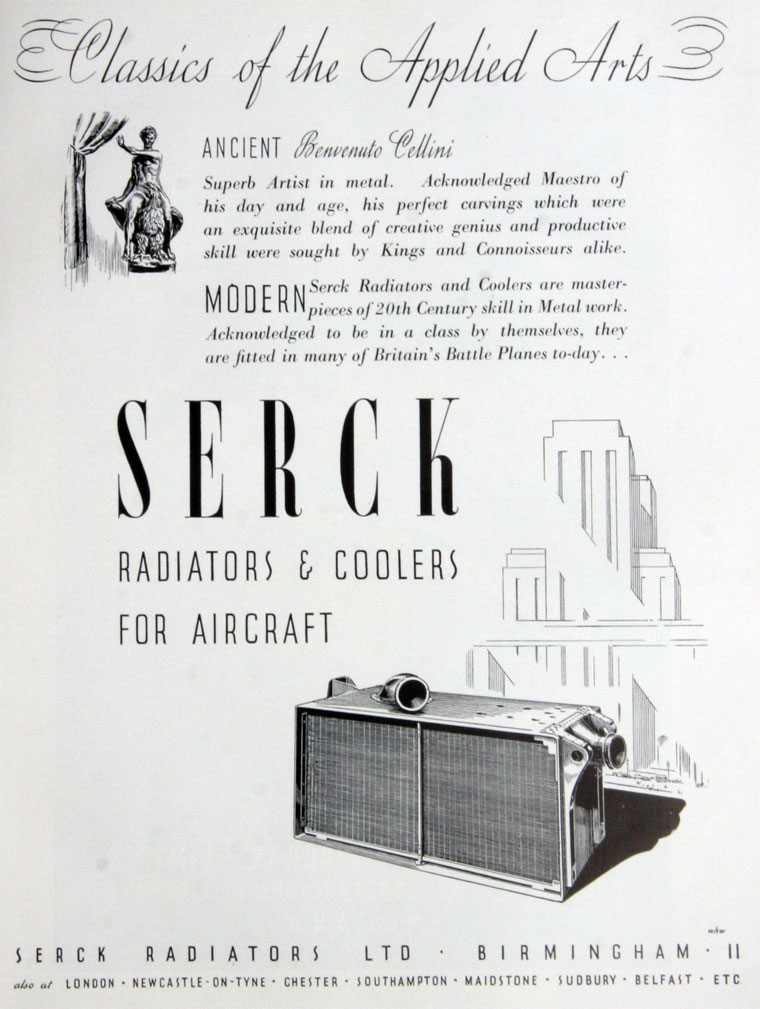 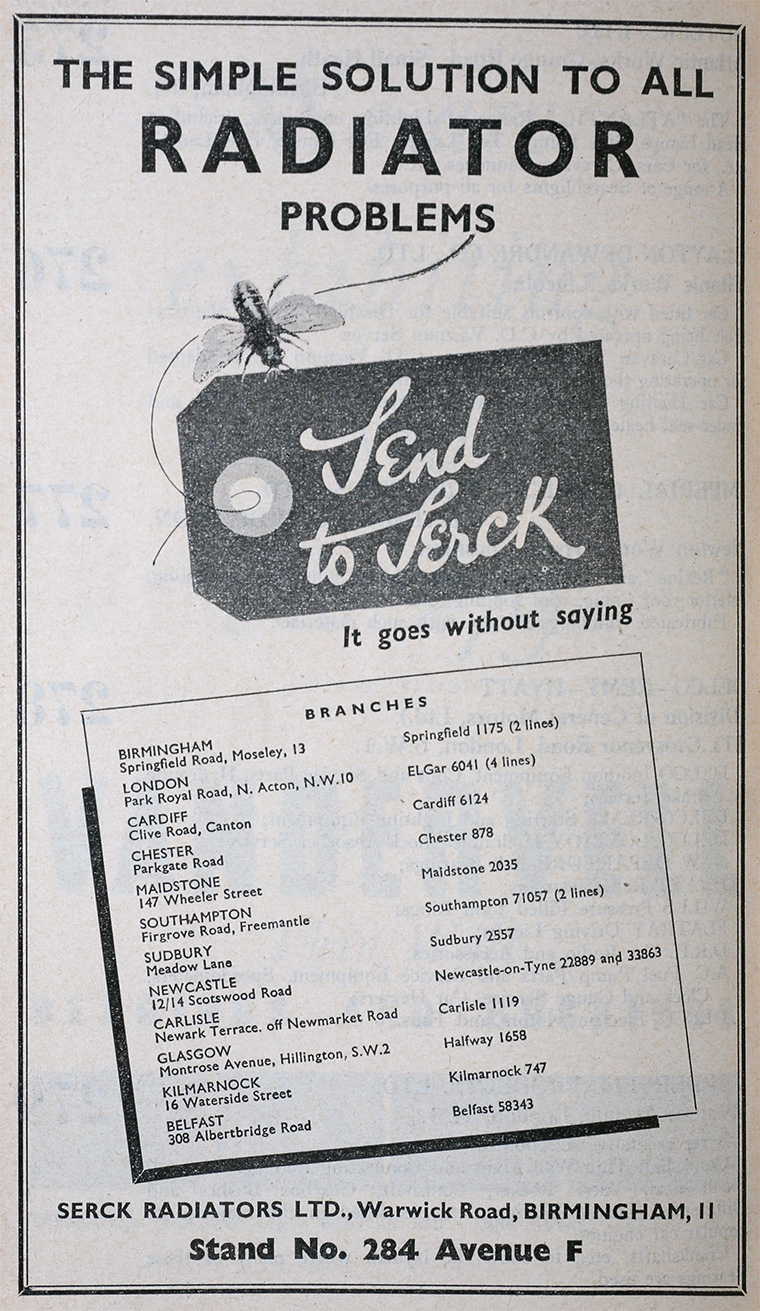 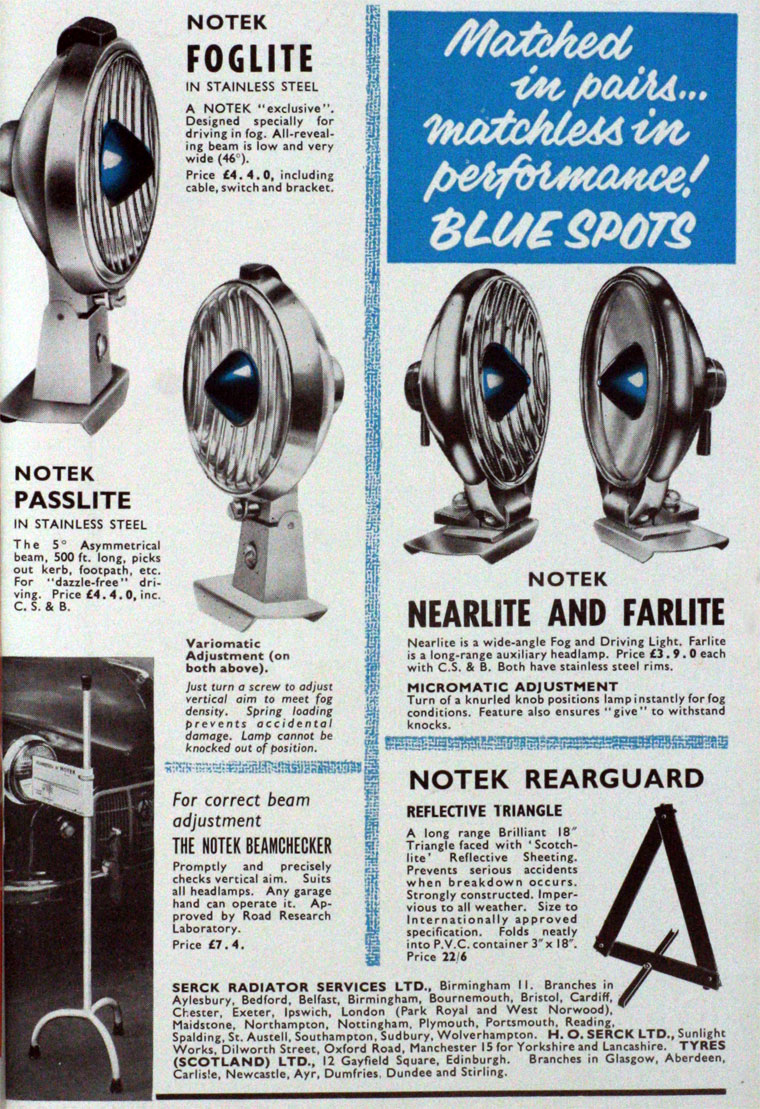 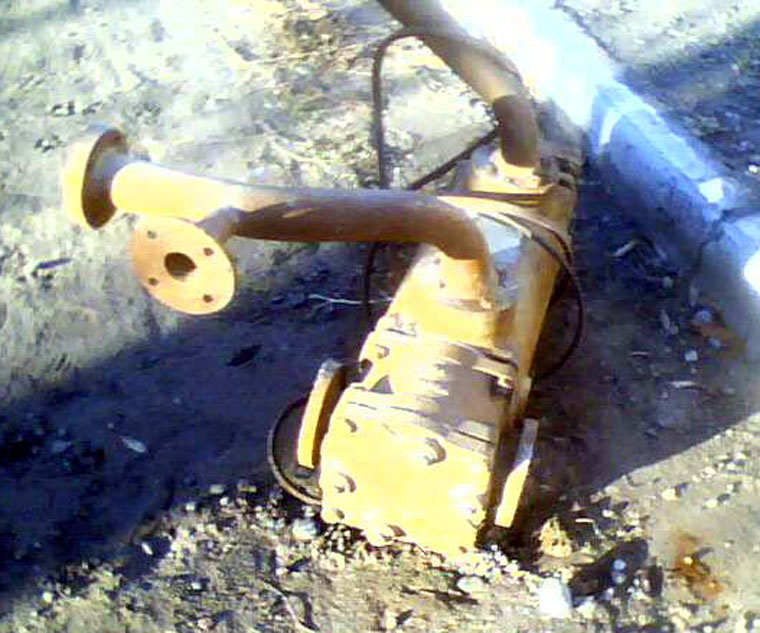 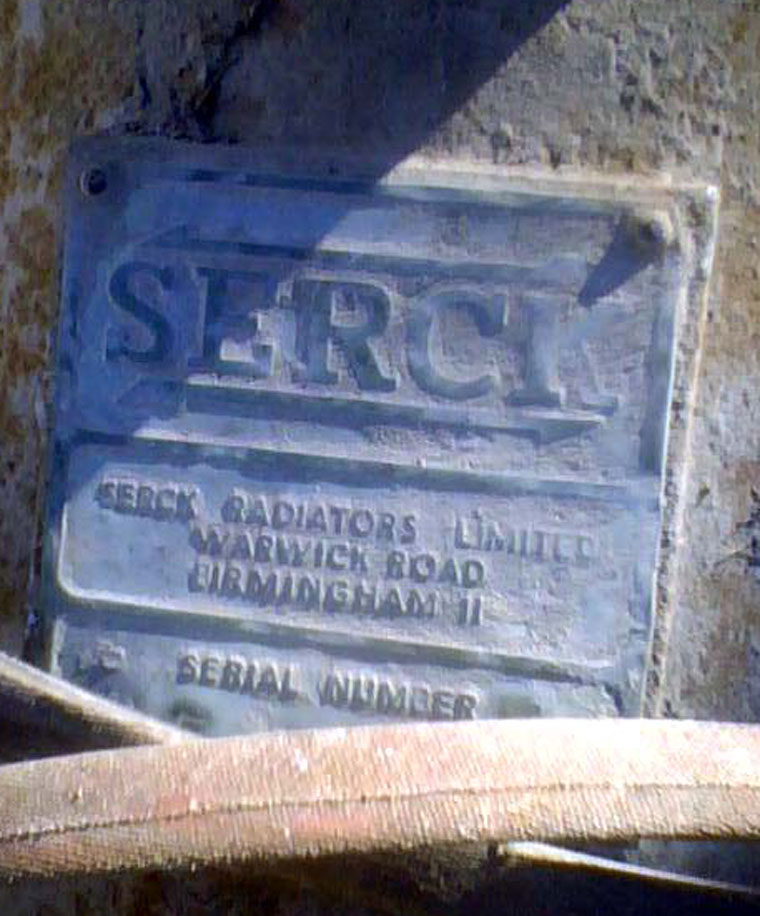 1907 Motor Radiator Manufacturing Co was formed in Bermondsey by Peter Oscar Serck, later moving to Coventry and then Birmingham

1919 After the Armistice, the factory at Greet was offered back to him and he formed Serck Radiators, as a public company with £200,000 capital of which he personally held more than half the shares, and was the Managing Director.

By 1922, about 180 people were employed, with the radiators being made by hand, a tinsmith only having six cases and tubes per week. At that particular time, there were many firms starting up in the motor industry, and inevitably some firms were unsuccessful and going bankrupt. One firm which Serck were having difficulty in receiving payment from was the Bean Car Co. Peter Serck decided that the only way of recovering the money was to visit them in the middle of the night, relieve them of half a dozen cars and sell them, which he did.

The Company continued to concentrate on motor vehicle radiators, introducing some new designs to supplement the honeycomb block, for example, the film-block and fin-tube block. There was a growing requirement for quality heat exchangers in other industries, and the company extended its activities to include equipment for marine diesel engines, rail traction other applications.

WWII. In the period of 1939 to 1945, over 65,000 aircraft radiators and 110,000 aircraft oil coolers were produced for use with Rolls-Royce, Napier and Bristol Engines. Although the manufacture of radiators for private cars was suspended, many thousands of radiators were supplied for service vehicles, fire pumps, engines and other essential transport. The normal output for the Serck organisation trebled for this period without a corresponding increase in personnel or factory space. During the war, the quality and reliability of Serck products were established, and afterwards, because of increased demand, the Company were able to offer all its previous employees new work. Manufactured parts for the De Havilland Mosquito.

1957 Serck Limited became the parent company of the Serck Group, with Serck Radiators becoming part of the group. Seeleys Road Works was completed in the same year.

1968 The last car radiator was produced, ending over 60 years involvement in the industry that made the Serck name famous. To reflect its activities more accurately, the Company’s name was changed from Serck Radiators to Serck Heat Transfer.

The Company later underwent significant divisionalisation. The seven divisions being:

With nearly seventy years experience behind it, at that point, Serck Heat Transfer offered complete heat transfer capability to all major industries, and a range of heat exchange equipment as one of the most comprehensive in the World.

From then on, Serck went through a number of buy-outs and take-overs

1982 The Serck Group was acquired by BTR Industries.

1997 Serck Heat Transfer was subject to a management buy out (Natwest Ventures).

2005 Therco acquired the Serck Industrial business, IP rights and drawings of every Serck cooler built over the previous decade.