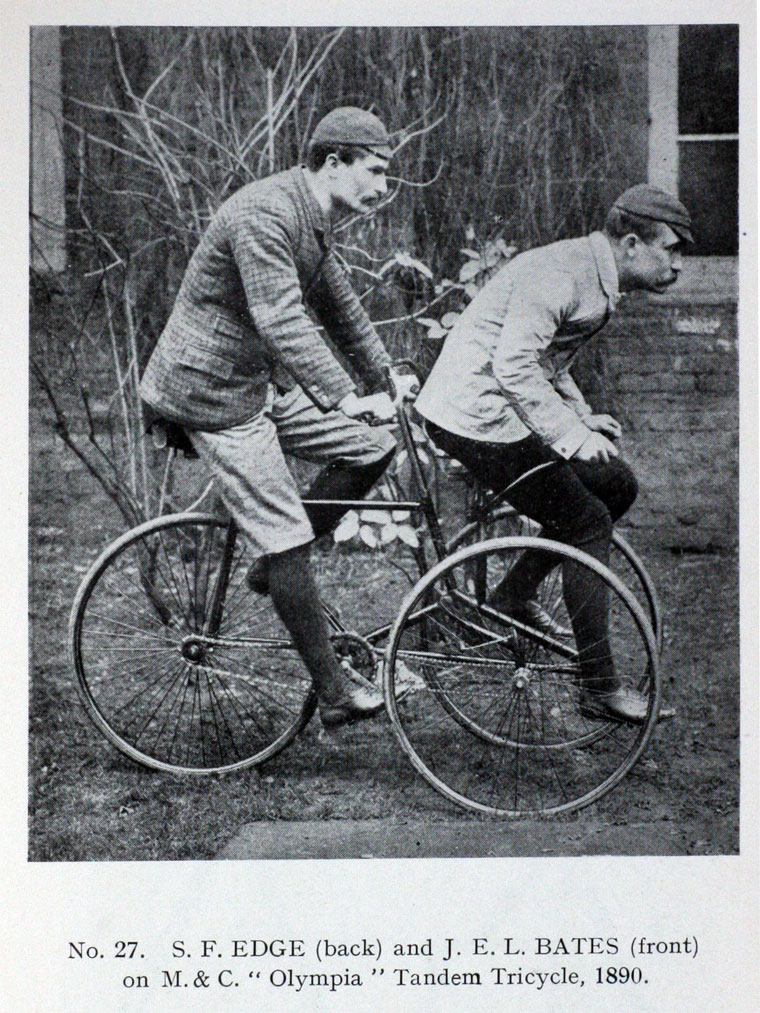 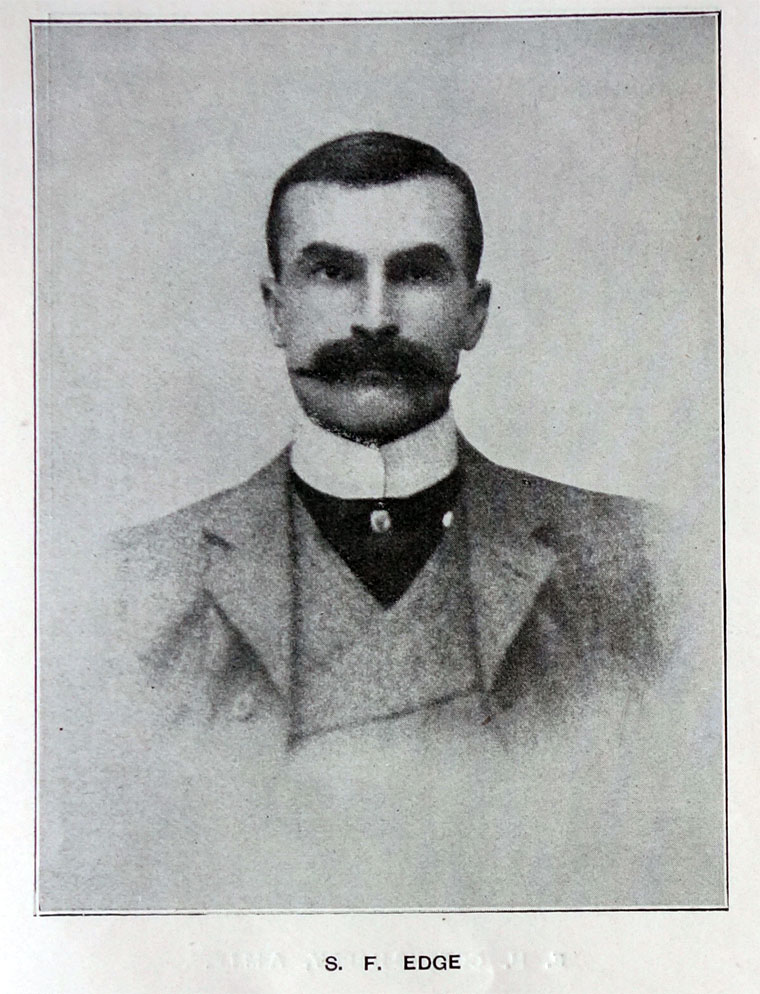 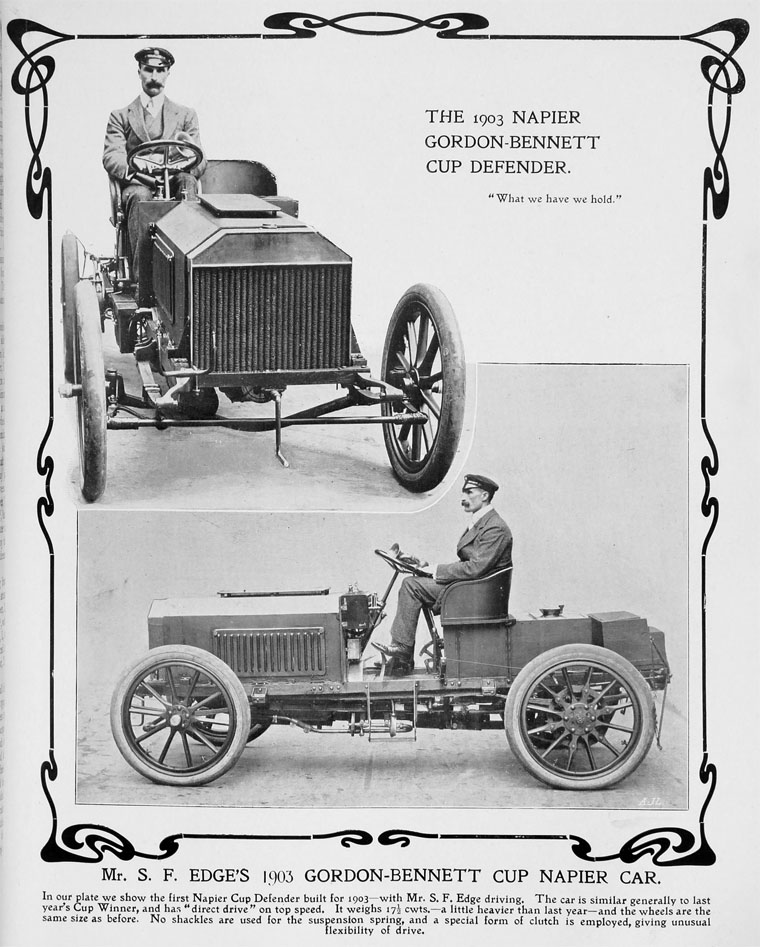 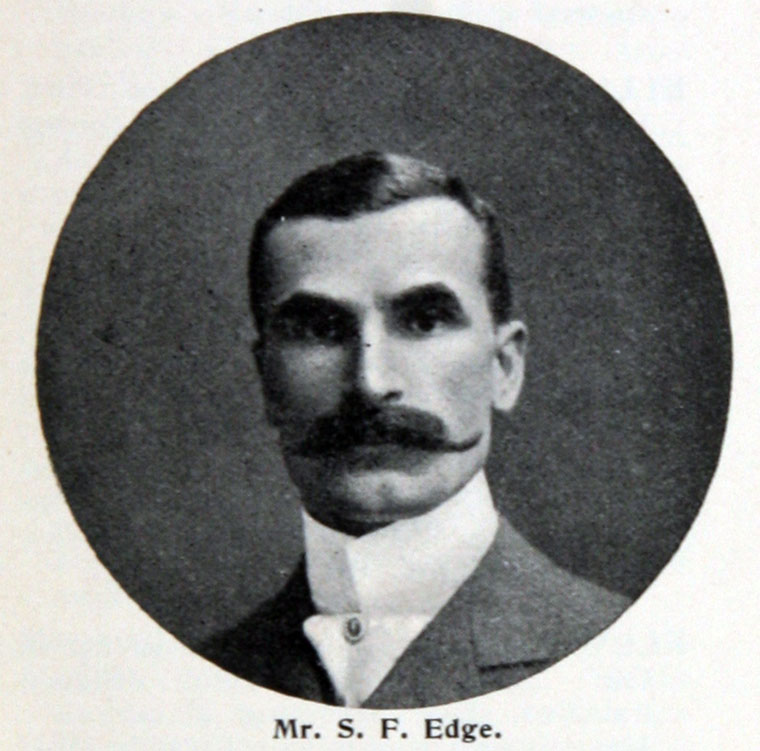 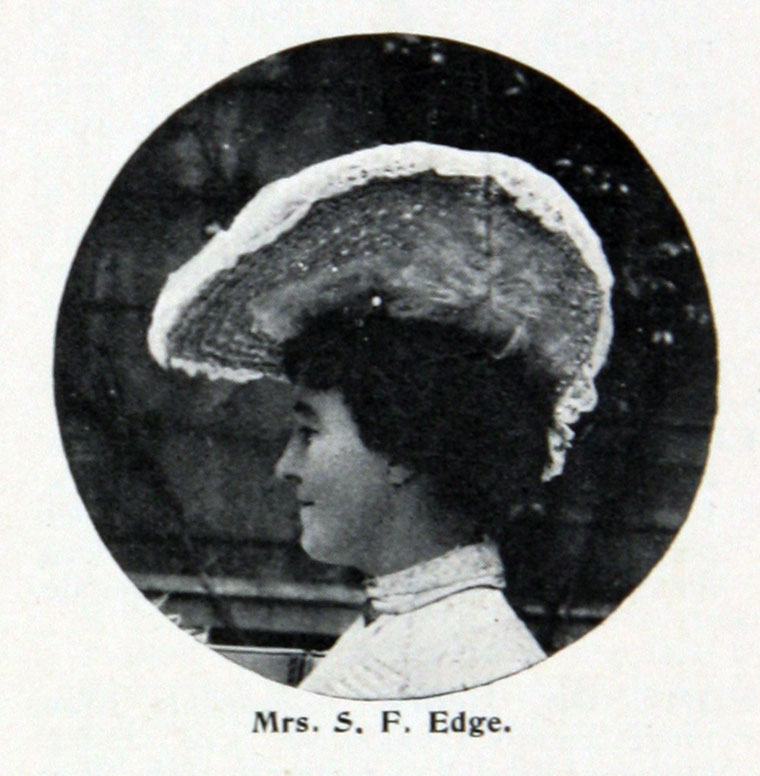 c.1871 At age three, he was taken to London where in his teens he grew famous as a bicycle racer.

He worked as manager of the Dunlop offices in London and in 1896 bought his first car, a De Dion-Bouton.

1899 he went into partnership with pioneering motorist Charles Jarrott and Herbert Duncan to found De Dion-Bouton British and Colonial as importers of cars.

1899 With Harvey Du Cros, he formed the Motor Vehicle Co to sell these improved cars, made by Napier (Edge paid ₤400, selling at ₤500), as well as Gladiators and Clemént-Panhards.

1900 Recognising the value of publicity gained from auto racing, which no other British marque did, Edge entered an 8 hp four-cylinder Napier in the Automobile Club's 1900 Thousand Miles Trial on behalf of Edward Kennard; driven by Edge, with Kennard along, on a circuit from Newbury to Edinburgh and back, she won her class, being one of only thirty-five finishers (of sixty-four starters) and one of just twelve to average the requisite 12 mph in England and 10 mph in Scotland.

He did the same (with C. S. Rolls as his riding mechanic) at the 837 mile Paris-Toulouse-Paris rally in June; the car would be eliminated due to ignition trouble.

In the 1901 Gordon Bennett Cup, Edge entered a special 17 litre Napier and was only able to test en route (she was completed 25 May, only four days before the event), Montague Napier serving as his riding mechanic; she overpowered her Dunlops, and fitting new (French) rubber led to disqualification, since they were not of the same nation of origin. In the concurrent Paris-Bordeaux rally, she retired with clutch trouble.

For the 1902 Gordon Bennett Cup, Edge's Napier was the sole British entrant; with his cousin, Cecil, as riding mechanic, she won at an average 31.8 mph (though by default, since the French entrants all fell out).

At the 1903 Gordon Bennett Cup, Edge had an 80 hp Napier, the Type K5, but was disqualified. Edge (with Arthur McDonald, manager of Napiers' Genoa factory, as riding mechanic) fared no better with the K5 in the 1904 Gordon Bennett Cup in Germany.

1904 EDGE, Francis Selwyn, 14, New Burlington Street, London, W.; 7, Tavistock Chambers, Hart Street, London, W. Cars: Napiers and Gladiators. Is England's foremost racing motorist, and one of the most progressive of British business motorists. Is managing director of S. F. Edge, Ltd., who are the agents for the celebrated Napier cars and the Gladiator cars. Is an Australian; was born in Sydney in 1868. Was formerly a racing cyclist, and holder of many records on track and road. Was appointed manager of the Dunlop Pneumatic Tyre Co. in 1896, in which year he first became a motorist. Has started at different times five important motor-car manufactories, and has done much to popularize the building and sale of British-made motorcars. Has competed in many of the great motor races on the Continent. Won the Gordon Bennett Cup race on a 40-h.p. Napier car in 1902, his time for the 379 miles being 11 hours 2 min. 53.6 secs., an average speed of 34.3 miles per hour. Drove a 35-h.p. Napier in the Gordon Bennett race in Ireland in 1903, but owing to persistent and bad punctures failed to keep the lead which he secured in the first lap, and arrived seventh. Clubs: Motor Cycling, London (President), A.C.G.B. & I. (Club Committee). [9]

He also was interested in motor boat racing and entered the 1903 Harmsworth trophy race held on the River Lee, Queenstown, Ireland, in a boat called Napier I, steered by Mr. Campbell Muir, which won.

1919 The agreement with Napier expired; Edge started to build up a shareholding in AC Cars gaining full control in 1922.

1927 Selwyn Edge bought the company outright for £135,000 and re-registered it as AC (Acédès) Ltd but sales, which had been falling, continued to decline.

1937 He made one final contribution to motor racing, inaugurating the Campbell Circuit at Brooklands in 1937, but took no further business interest in the motor industry, and died at Eastbourne in 1940 aged 71. [14].

EDGE, S. F.- Born in 1868 in Sydney, New South Wales, Mr. S. F. Edge came to this country in his infancy. Road locomotion claimed his attention very early in life, and between 1887 and 1893 he figured very prominently and successfully in the cycle racing events of those years. In 1896 he started with a motor tricycle, followed by a Boll& and a great number of other cars. After touring for some time on Panhard cars he took up the Napier cars, upon which he achieved the great success of last year in the Gordon Bennett Race, which resulted in the Cup being brought over to this country, and which, thanks to his victory, is now held by this Club. Mr. Edge has turned his very considerable automobile experiences, both racing and touring, to practical account by taking a very considerable active interest in the British motor industry.