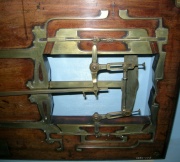 1837 model of cylinder and valve gear, to the 1834 patent of Samuel Seaward, at the London Science Museum. This arrangement was used on HMS Gorgon

Seaward & Capel were makers of steamships, of Poplar.

1824 John Seaward took over the Canal Iron Works, Millwall, and was joined soon after by his brother Samuel Seaward.

John and Samuel and James Capel gained renown for their introduction of the direct-acting paddle-engine. They fitted warships as well as Thames steamers, and also made swing-bridges and cranes.

1835 Seaward and Co installed engines designed by W. C. Taylor and made at the Orchard Yard, Blackwall in the Ly-Ce-Moon[1]

c.1835 Naval contracts were given to Seaward and Capel for the first time.

1834–5 the company built a shed along the north side of the wharf, as covered sawpits and a warehouse for castings.

1836 John Seaward introduced a direct-acting paddle engine and this was known as the 'Gorgon' engine. A model is in the London Science Museum

1836 Seaward and Co were manufacturers of steam-packet machinery[2]

1838 Incorporated another wharf into the Canal Iron Works, building a smithy. The main works buildings were extended southwards, remaining in use as a foundry and mill with associated shops, and served by sheer-legs and cranes of up to 20 tons capacity on the wharf[3].

1843 The Penelope steam frigate (Seaward and Co of Poplar).

1859 Messrs. Seaward and Company built an engine to run between London and Leeds, which worked well and ran at a good speed, but from the "oppressive burden of the absurd and disgraceful tolls, it was impossible to carry out the intention with any chance of remuneration to those engaged in the enterprise." The matter remained in abeyance for some time, but was eventually abandoned. [6]

1860 the Canal Works were taken over by William Jackson and Richard Watkins (see Jackson and Watkins).