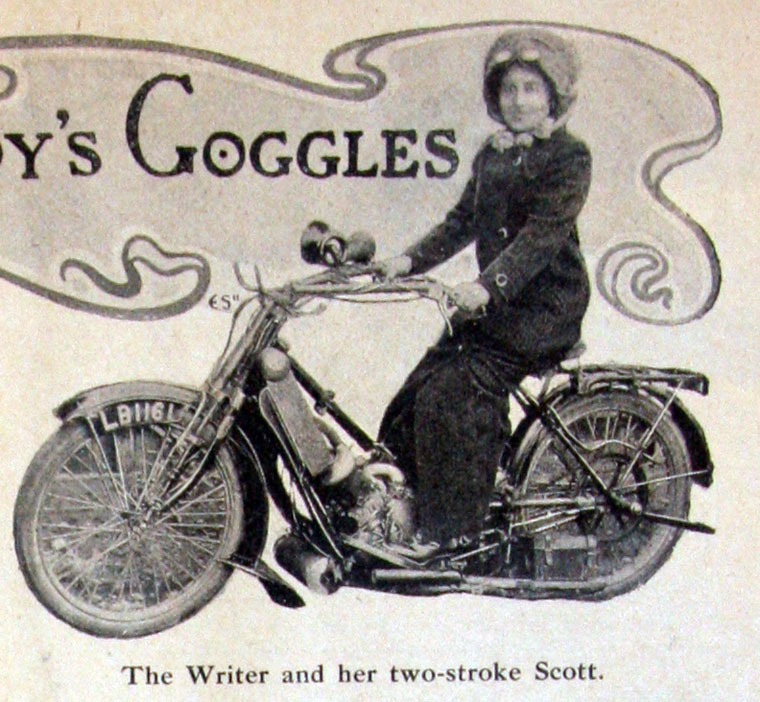 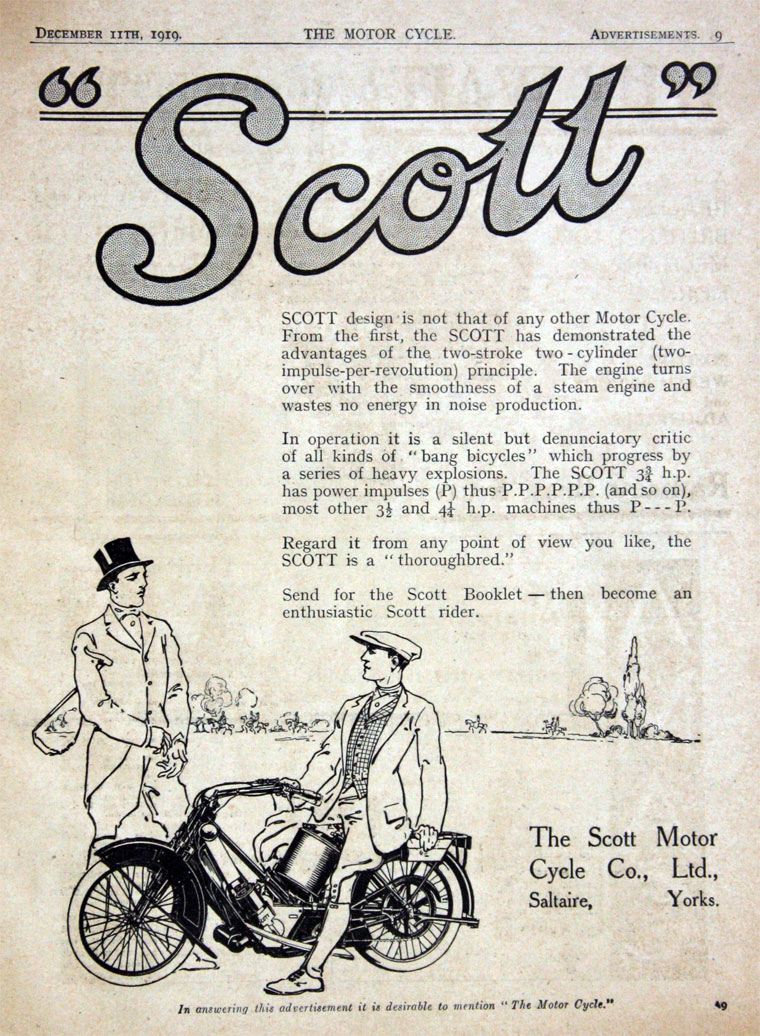 The Scott Motor Cycle Company of Saltaire, Yorkshire and was a well known producer of motorcycles and light engines for industry. The company was founded by Alfred Angas Scott.

1901 Scott built his first engine. It was a twin-cylinder two-stroke, fitted to a Premier bicycle. It was mounted in front of the headstock and the front wheel was belt driven.

1902 Scott revised his design so that the engine was behind the headstock with a friction, belt driven countershaft to the rear wheel.

1904 Scott patented his design as a twin-cylinder two-stroke with a central flywheel, overhung crankshafts and round crankcase doors.

1906 For one year, a basic 2.5hp single was offered called the 'Scout'. It was a typical primitive with rigid forks and belt drive. Although the claim was made that they produced the engine themselves, it was probably bought in.

1908 By now, Scott had developed a complete machine with a 333cc, 3hp engine, air cooled cylinders and water cooled heads. This clever design remained unchanged for many years. He arranged for the design to be manufactured by the Jowett brothers, but they built only six machines before alternative arrangements were made in Bradford to create the Scott Engineering Co. During that year Scott raced successfully at several hill climbs. Due to its style and the fact that it was easy to start, the motorcycle attracted a lot of attention.

1909 Production started in earnest. The machines had kickstarts and an increased capacity.

1911 There had been many improvements over the past couple of years. The engine became fully water-cooled and the capacity was enlarged to 486cc. A machine was entered in the TT with high hopes, but the engine had a lot of problems.

1912 After a lot of modification, Scott entered the TT again, and scored success when Frank Applebee won the Senior and set the fastest lap.

1913 Success was repeated the following year, this time by Tim Wood who won by just five seconds. It was one of the closest victories in the history of the TT. The two-speed Scott was further improved that year, as demand was greater.

1914 For the TT, the works machines had a revised engine, but the results were disappointing. They finished well down - even after setting the fastest lap. Production continued into the first couple of years of the Great War, and for the services they built a sidecar model that carried a machine gun. Scott's ideas continued to develop and he produced an array of models. One was a three-wheeled gun car. There was also the Scott Sociable, which looked like a small car with the front left wheel missing. These models were built on a triangular tubular chassis.

1915 Scott left the company in 1915 and after World War I formed the Scott Autocar Co in nearby Bradford, to make a civilian version of his proposed military three-wheel motorcycle/car hybrid called the Sociable.

1922 The original motorcycles had returned after the war and the 498cc, two-speed Squirrel was listed.

1925-1929 The Super Squirrel was produced with several sizes and variations available. There was also the Flying Squirrel, which was more conventional in style. For a short time, a dirt-track model was added.

1927 Death in an accident of Rex Adams, winner of the Tourist Trophy and working for the Scott Motorcycle Co of Saltaire.[1]

1930 An air-cooled Scott single appeared. The machine was conventional in style, and by making the engine themselves, it was intended to appeal to the lower end of the market. However, due to lack of success, it was soon dropped. The design appeared dated and cumbersome, but without the talent and financial backing of Alfred Scott the company did not progress.

1934 The company announced a water-cooled in-line three-cylinder model, which was exhibited at Olympia that year, but few were built and by the end of 1937 it was no longer listed.

World War II. The Scott machines were expensive and highly specialised, so output was low. Lack of sales forced them into voluntary liquidation and so the firm was sold to Aerco Jig and Tool Co of Birmingham, a company owned by Matt Holder who was a Scott fan.

1956 After several years Holder managed to get the Scott back into production. A couple of models were produced in small numbers. He produced the Scott Swift using an engine with flat-top pistons.

1960s A racing Scott twin made an appearance, but with little impact, and those motorcycles manufactured were built to order.

1982 The production of Scott motorcycles ceased.