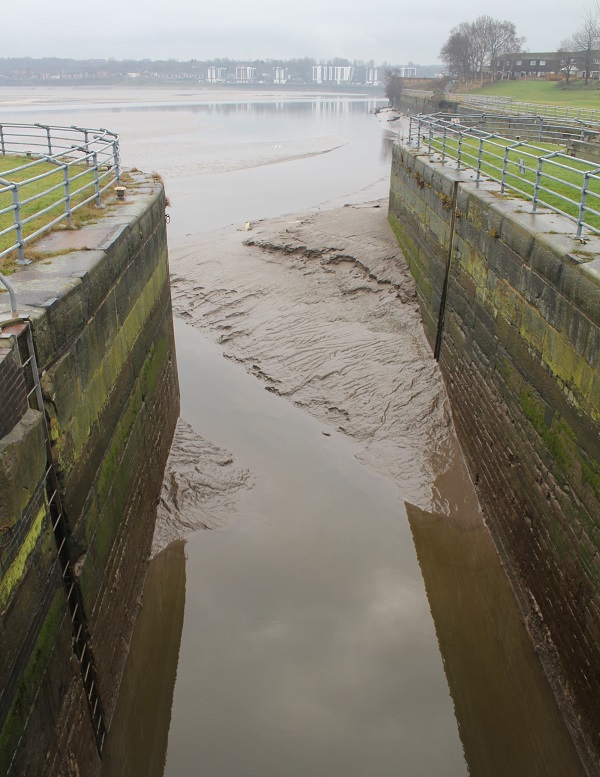 2017. West Bank Locks, where the canal joins the River Mersey, looking towards Runcorn

The Sankey Canal, which is also known as the Sankey Brook Navigation and the St Helens Canal, is a canal in Cheshire, extending into Lancashire and connecting St Helens with the River Mersey.

When opened in 1757, it ran along the valley of the Sankey Brook from the point where the brook joined the River Mersey, to a location to the north east of St Helens.

Extensions were constructed at the Mersey end of the canal, firstly to Fiddlers Ferry and then to Widnes, while at the northern end, it was extended into what became the centre of St. Helens.

The canal was gradually abandoned between 1931 and 1963, but has been the subject of a restoration attempt since 1985, when the Sankey Canal Restoration Society was formed.

The Sankey canal was built principally to transport coal from the Lancashire Coalfield mines to the growing chemical industries of Liverpool, though iron ore and corn were also important commodities. These industries rapidly expanded, and spread back along the line of the Canal to St Helens, Haydock, Earlestown, and Widnes, which were small villages until this period. The canal was thus an important factor in the industrial growth of the region.

The line of the canal was surveyed by Henry Berry and William Taylor, for which they charged £66. Berry, who had previously worked with Thomas Steers, Liverpool’s First Dock Engineer, on the Newry Canal in Northern Ireland, was Liverpool’s Second Dock Engineer, but was appointed Engineer for the navigation when those promoting it convinced the Dock Trustees that they should release him for two days a week.

It is not known whether it was Berry or the promoters who presented the plans to parliament as an upgrade to an existing river navigation, despite the fact that it would be built as a proper canal, but it is thought to be the only time that a canal was authorised by parliament without anyone petitioning against it.

The Act of Parliament authorizing the construction of the navigation was passed on 20 March 1755, and was entitled An Act for making navigable the River or Brook called Sankey Brook, and Three several Branches thereof from the River Mersey below Sankey Bridges, up to Boardman's Stone Bridge on the South Branch, to Gerrard's Bridge on the Middle Branch, and to Penny Bridge on the North Branch, all in the county palatine of Lancaster.

The canal was open and carrying coal by 1757; carriage of all goods was charged at a flat rate of 10d per ton.

As the title of the Act states, in addition to the mainline between the Mersey and St Helens, there were three branches to nearby collieries: the South Branch to Boardman's Stone Bridge, near St Helens; the Middle Branch to Gerrard's Bridge; and the North Branch to Penny Bridge.

A second Act of Parliament was obtained on 8 April 1762, amending the earlier act, and was entitled, 'An Act to amend and render more effectual, an Act made in the Twenty-eighth Year of the Reign of his late Majesty King George the Second, for making navigable Sankey Brook, in the county of Lancaster, and for the extending and improving the said Navigation'. This authorised the extension of the navigation to Fiddler's Ferry on the River Mersey, and to take an additional toll of two-pence per ton, making the rate one shilling per ton. The line of this extension was surveyed by John Eyes, who acted as principal witness to see the bill through parliament.

An early trial of steam power took place on 16 June 1797, when, according to the Billing's Liverpool Advertiser, dated the 26th, John Smith's "vessel heavily laden with copper slag, passed along the Sankey Canal ... by the application of steam only ... it appears, that the vessel after a course of ten miles, returned the same evening to St Helen's whence it had set out". This boat was powered by a Newcomen engine working a paddle crankshaft through a beam and connecting rod. See 'Steam Boat Experiments' below.

To counter competition from the new railways, a further extension of the canal was planned from Fiddler's Ferry across Cuerdley and Widnes Salt Marshes to Widnes Wharf, on the west bank of the River Mersey near Runcorn Gap, thus creating an additional connection to the Mersey with another basin. This was authorised by a third Act of Parliament, granted on 29 May 1830, entitled 'An Act to consolidate and amend the Acts relating to the Sankey Brook Navigation, in the county of Lancaster; and to make a New Canal from the said Navigation at Fidler's Ferry, to communicate with the River Mersey at Widness Wharf, near West Bank, in the township of Widness, in the said county,' repeals the former acts of the 28th George II. and 2nd George III. and incorporates the proprietors under the title of "The Company of Proprietors of the Sankey Brook Navigation.'

Francis Giles was appointed Engineer for this extension, which opened in 1833.

In 1825 Giles, who was a pupil of John Rennie and involved in many canal projects of the period, had proposed a link from the Sankey, via an aqueduct across the Mersey, to the Bridgewater Canal and the Mersey and Irwell Navigation, but this was never implemented.

A staircase (double) lock was built on the Sankey Canal and a second staircase was built later when the Ravenhead Branch was constructed in 1775. They are known respectively as the Old Double Lock and the New Double Lock. The latter was restored by St. Helens Borough Council in 1992, although it has no navigable waterway either above or below it.

Built primarily to take coal from Haydock and Parr down to the Mersey and so on to the saltfields of Cheshire and Liverpool, the final traffic on the Sankey was very different, and in the opposite direction, consisting of raw sugar for the Sankey Sugar Works at Earlestown, Newton-le-Willows, from Liverpool.

The Sankey’s immediate commercial success, followed soon after by that of the Bridgewater Canal, led to a mania of canal building, and for further extension schemes to be proposed for the Sankey. Francis Giles' proposal to link the canal to the Bridgwater Canal was not implemented, and neither was a plan to link the canal to the Leeds and Liverpool Canal near Leigh, to the North-East. Apart from the early extension to Fiddlers Ferry, which provided better access to the River Mersey, and the 1775 extension to St Helens, the only major change came with the extension to Widnes in the 1830s.

The ending of the sugar traffic in 1959 led to the closure of the Canal in 1963. North of the Sugar Works, closure had taken place in 1931, and fixed bridges quickly replaced the old wooden swing bridges. The Canal, however, remains largely in water right up into the centre of St Helens, although its terminus had been truncated in 1898, when Canal Street was built over it.

The canal hosted at least two steam boat experiments in the 18th century.

1797: 'Mr. Baldwin of Prescot, has adapted a steam-engine to the rowing of vessels on smooth water. An experiment was lately made on the Sankey canal, when a vessel heavily laden was moved with greater rapidity than could be effected by hawling or rowers, through the simple agency of this steam engine, the oars performing 18 strokes in a minute. The invention promises to be highly beneficial to inland navigation.'[1]. This was Thomas Baldwin - 'John Smith was a rude, self-taught mechanic, and was supported by a Thomas Baldwin, at that time of St. Helens, and was the first aeronaut [i.e. Baldwin] who ever ascended in a balloon, either in this or the adjoining counties.'[2]