Model of the Sandycroft steam-driven Thames-Hauraki pump at the Museum of Technology, Bella Street, Thames 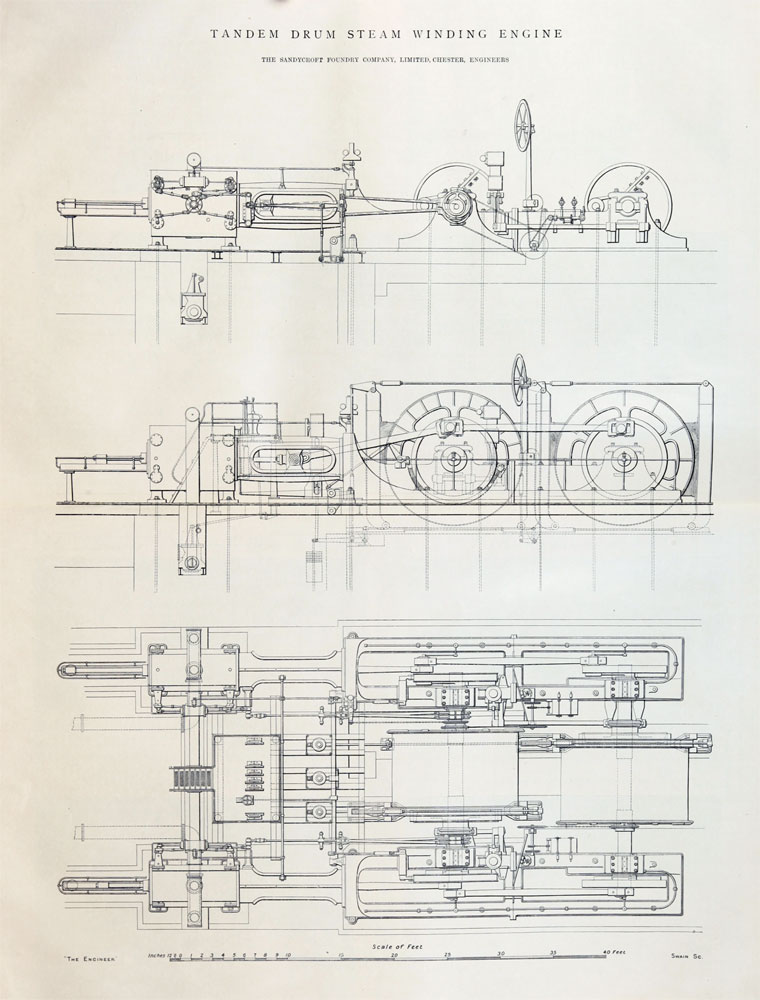 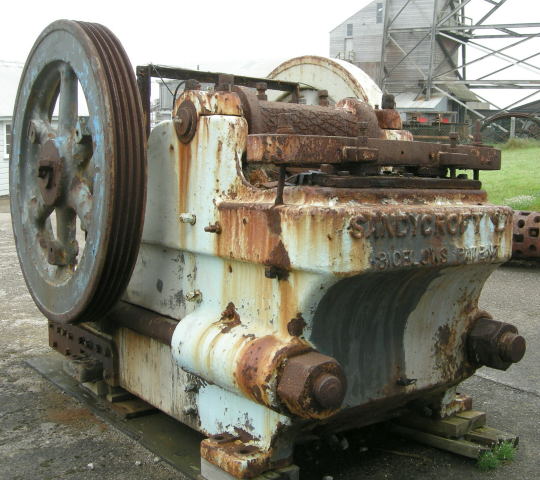 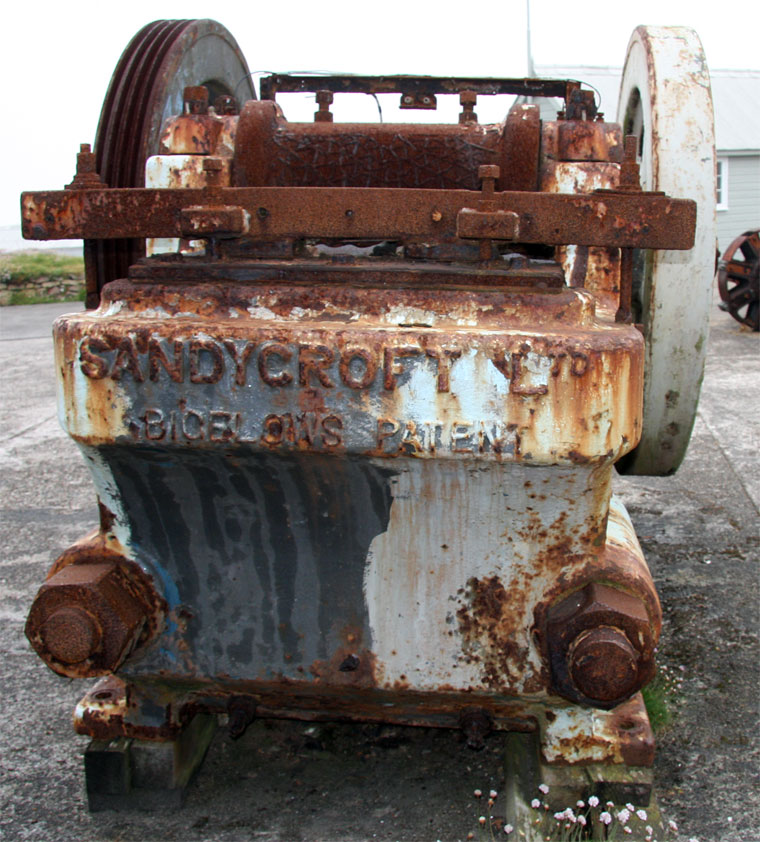 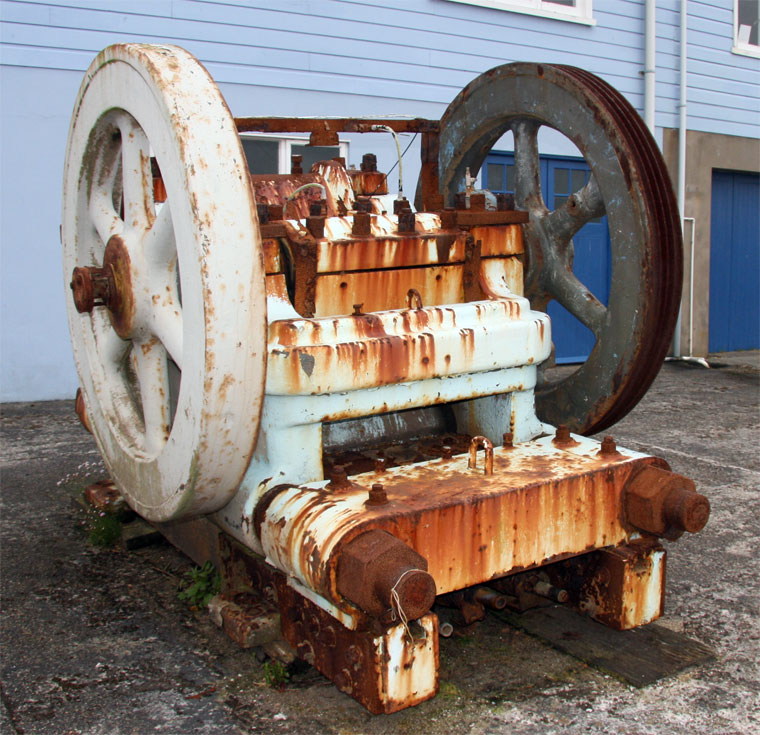 of Sandycroft, on the River Dee, Hawarden, near Chester.

A small shipyard developed around a small inlet known as Fowl Pool Gutter during the mid 19th century.

Initially the business was operated by the Rigbys of Hawarden - Rigby and Hancock and W. and J. Rigby

1839 'Partnership dissolved between William and John Rigby, iron founders, Hawarden and Sandycroft, 27 May.'[1]

By the mid 19th century a foundry had developed on the eastern side of the inlet.

c.1855 The size of a vessel built in the yard was, in effect, beyond the capacity of the inlet for launching. At this time Thomas Cram gave up the business of the Sandycroft Foundry and Ship Yards and others took charge of the construction of the Royal Charter.

1862 The site was taken over by John Taylor.

1863 In connection with adjacent railway development, it was recorded that the Sandycroft Foundry belonged to Sir Stephen Richard Glynne, Baronet, and was in the occupation of Messrs. John Taylor and Sons.[2]

The company's name was later changed to the Sandycroft Foundry and Engine Works Company Ltd.

1901 The Sandycroft Foundry and Engine Works Company held a general meeting at 6 Queen Street Place, London, to hear the report of the liquidator[4].

1914 Manufacturers of mining and electrical machinery. [6]

Events and Examples of Products

1824 'The St. David Steam Packet. — This beautiful vessel, which as our readers are aware, is built expressly for the purpose of facilitating our communication with Wales, is to proceed down the river to Sandycroft, by tomorrow afternoon's tide, in order to receive on board her powerful engine, prepared by Messrs. Rigby and Hancock. It is likely that the novel sight will attract the presence of a good number of spectators. We understand The St. David will commence her errands of convenience between our port and the Welsh coast, before Chester races.'[9]

1839 'Partnership dissolved between William and John Rigby, iron founders, Hawarden and Sandycroft, 27 May.'[10]

1855 Advertisement listing items to be sold by auction at the Sandycroft Foundry and Shipyards sale of stock-in-trade. Items included several unfinished marine engines [11]

1856 Advertisement: 'SANDYCROFT IRON FOUNDRY AND SHIP-YARD, ON THE RIVER DEE.
Sale of the whole of the extensive and very complete IRON FOUNDRY, SHIP-BUILDING YARDS, DOCK WHARFS, LANDS, and PREMISES, on the River Dee, five miles from the city of Chester, with a Branch from the Works to the Chester and Holyhead Railway ; together with the valuable ENGINES, MACHINERY, and PLANT thereon, all in the best condition, with immediate Possession.
MESSRS. CHURTON respectfully announce that they have been instructed to SUBMIT to SALE by AUCTION, at the Auction Mart, in the city of Chester, on Friday next the 29th day of August, at twelve o'clock at noon (unless previously disposed of by private Contract), in one lot, and subject to such conditions as will be then produced —the LEASE of all those well-known and extensive Premises, called the SANDYCROFT IRON WORKS and SHIP-YARDS, capable of executing works of great magnitude with several Acres of LAND immediately adjoining, possessing a great extent of river frontage, and a Branch to the Chester and Holyhead Railway.
These Works, for many years carried on by Messrs. W. and J. Rigby, and since by Mr. Cram, occupy a very considerable area, and have recently had most important additions made to them in the erection of an extensive Iron Foundry and Workshops. . .


The Plant and Machinery, which will be included in the sale, comprises two steam-engines, of fourteen and ten horse power respectively, with the requisite boilers, and ranges of driving gear; powerful boring and surface lathe, 12 feet diameter ; several slide and other lathes of various sizes ; drilling, slotting, planing, boring, and screwing machines, mostly by Whitworth, and other eminent makers; crab winches, shear-legs of great strength, punching and shearing presses, bending rolls, boiler and rivet-maker, furnaces, forges, melting furnaces, travelling and other cranes, and every other requisite for carrying on these extensive Works, the whole of which are in the best condition, and ready for immediate use.
A Building Society, which possesses some Land in the immediate neighbourhood of these Works, are prepared to erect any number of Cottages which may be required.


The above Premises are held by Lease from Sir S. R. Glynne, Bart., for a term, of which thirty years are unexpired.


Particulars with lithographic plans may be had, with any further information, by applying to Messrs. Bloxam and Ellison, Solicitors, No. 1, Lincoln's Inn Fields, London; Messrs. Potts and Roberts, Solicitors, Chester; or to the Auctioneers, Chester and Whitchurch, Shropshire.

N.B.—Sandycroft is distant (via Queen's Ferry) five miles from the Sutton Station on the Birkenhead Railway.'[12]

1865 'Maes-y-Safn Mine. A New Cornish Engine has been erected at a cost of about £12,000, and last week it was started with some ceremony. The engine is said to be the largest ever erected for the purpose in North Wales, has a cylinder of 80 inches diameter, ten feet stroke, and capable of working up to 320 horse power. There are five tubular boilers, and 320 yards of pumps attached. The engine is not entirely new, part of it having been purchased in Cornwall, and the remainder supplied by the Sandycroft Foundry Company, including the massive beams of 34 tons weight. It has been fitted up with all the latest improvements. The mine is 320 yards deep, and the pumping engine is capable of discharging 800 gallons of water per minute. Attached to the pumping engine there is steam capstan of 35 feet beam, for raising and lowering the pump rods, &c. It is one of the first of the kind that has been erected in this part of the country by the Sandycroft Foundry Company. The capstan is capable of lifting twenty tons. The cylinder is 25 inches in diameter, and 5 feet stroke, and is constructed to work either high pressure or condensing. The engine will also weigh the ores, and a crusher will be attached in addition. It is a new thing, and has been the means of effecting a great saving of time in lowering and filling the pit-works. After the engine had been started the company present took dinner at the office. A dinner was also given to the miners, and a gift of money to each man and boy.' [13]

1886 'RESURFACING WOOD PAVING. Some experiments have recently been carried out in Manchester with the view of testing a machine for cutting and resurfacing roadways laid with wood paving after they have become unevenly worn by traffic or by settlement. The machine is the invention of Mr Arthur C. Bicknell, of the Sandycroft Foundry Company, Chester. In appearance it is not unlike an ordinary traction engine, propelling itself, and carrying in front of it large, revolving, horizontal head fitted with cutters, and driven by friction gearing. In the experiment referred to a number old wooden blocks which had been taken up from a worn-out road, and were full of stones and grit, were relaid in concrete, and fitted in with cement and sand, the usual method of making a road. A week was then allowed for the cement to be thoroughly set before the cutting-machine was applied. The surface was then taken off, the cuts varying from half an inch to three inches in depth. The deeper the cut the better the machine appeared to work, the cutters getting below the grit and stones on the surface. The speed at which the cutting head advanced was about 1ft. per minute. It would appear desirable that further experiments should be carried out on worn road instead of on a batch of worn blocks reset. This would be a fair test of the invention, which, if proved successful, might aid in prolonging the life of wood-laid roads between renewals, and thus reduce the frequency of stoppages in thoroughfares so paved.'[14]

1888 'MINING ENTERPRISE IN THE ISLE OF MAN. OPENING OF A NEW SHAFT AT FOXDALE MINES. ..... The new engine that was started on Tuesday is a 70-inch pumping engine made by the Sandycroft Foundry Co., Chester ; the cylinder has a ten feet stroke in the shaft and eleven feet in the room. The plates, piston rod, and beam are all made of steel, and some of the plates are said to be the largest ever rolled. Formerly wrought iron, and cast iron were used in the construction of such engines, but the directors, with their usnal enterprise, determined to adopt the more modem idea of using steel. The engine has been placed In a specially constructed house of considerable height, directly opposite the new shaft. It was originally intended to place two engines of the like construction side by side, but as yet the directors do not see the necessity for erecting the two, although should occasion ever arise, another engine can be placed alongratde the new one which was started on Tuesday. The new engine is capable of pumping 65 gallons of water a minute. The new shaft will cut the lode at 200 fathoms, and will eventually penetrate as far as 350 to 400 fathoms. Everything connected with the pit work, the mode of lowering and rising, is of the most modern description, the new engine being employed to both wind the ore, &c., out of the mine, and likewise wind the skips to carry tbe men up and down the shaft. One great advantage of this is that the men can be lowered into the mine, or raised to the surface in the marvellously short space of one minute and a quarter, and this will, in addition, obviate the necessity of the men having to climb about 150 fathoms of ladders, which in many cases makes a man less fitted for his work than if he is lowered direct to his working level. ....'[15]

1891 Advert. Listed as The Sandycroft Foundry and Engine Works Co. [16]

1898 Thames-Hauraki pump commissioned at Bella Street Pumphouse, Thames, New Zealand, for draining gold mines. (NB Most of the engine was scrapped, but the external bell crank is intact, and the crankshaft to drive it was found buried in a pit when the pumphouse was being restored as the Museum of Technology. The original overhead crane, made by James Spencer and Co of Hollinwood, is still in situ, and this has the date 1896, so presumably the Sandycroft steam pumping machinery construction commenced at that time).