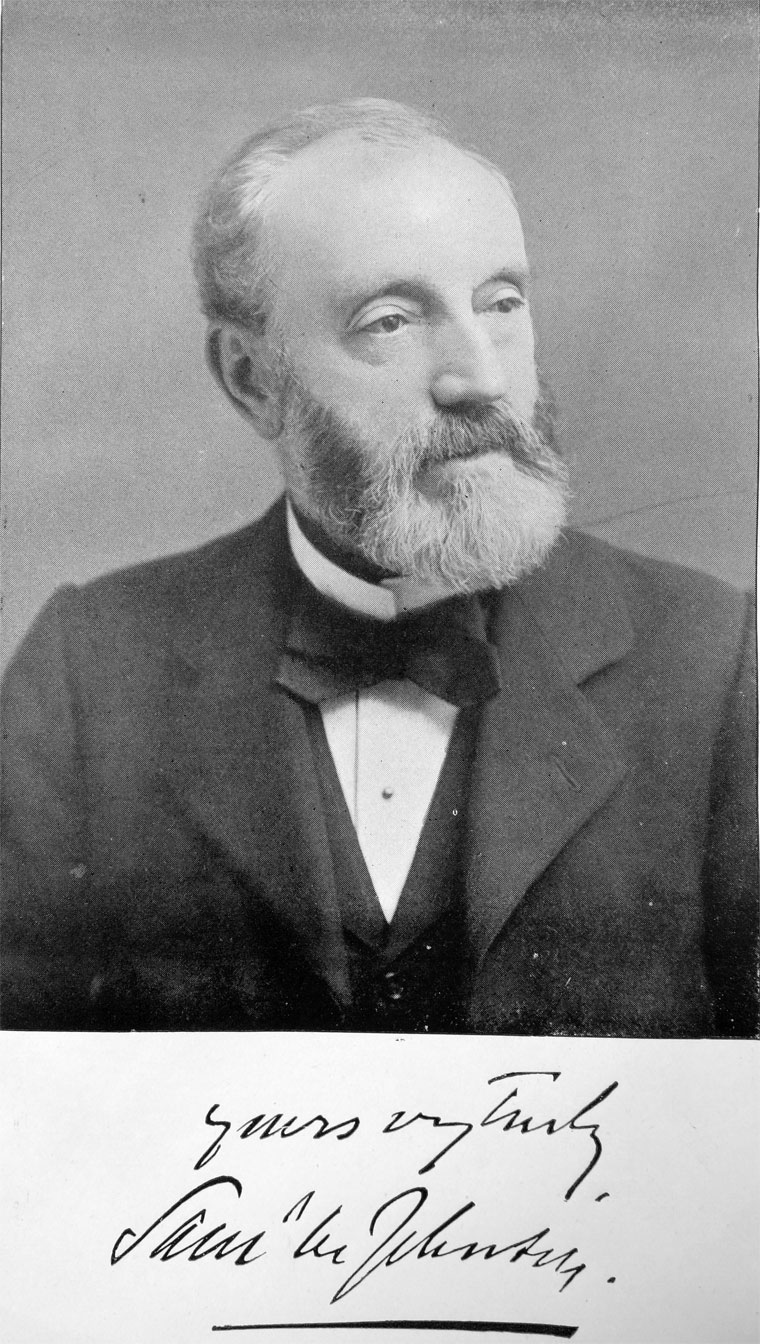 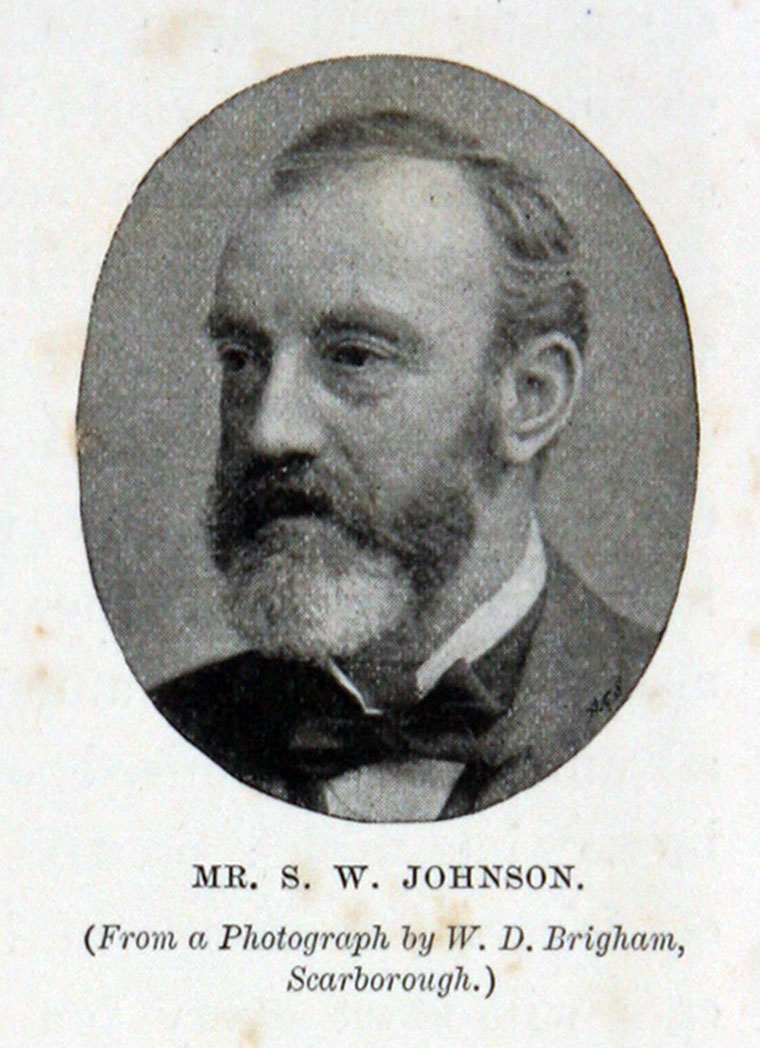 1867. Designed by Johnson for the Midland Railway.

1831 October 24th. Johnson was born in Bramley, Yorkshire, the son of James Johnson (1805- ), of Leeds, an engineer who was in the service of the Great Northern Railway Co., and his wife Sarah

Became an engineer at the locomotive builders E. B. Wilson and Co and served his apprenticeship under James Fenton

1864 Appointed Locomotive Superintendent of the Edinburgh and Glasgow Railway.

1866 After only two years in Scotland he replaced Robert Sinclair of the Great Eastern Railway (GER) at Stratford Works.

1873 He stayed at Stratford for seven years until moving to the Midland Railway at Derby as Locomotive Superintendent, where he stayed until his retirement in 1904. During this time he:

SAMUEL WAITE JOHNSON was born at Bramley, near Leeds, on 14th October 1831, being the son of Mr. James Johnson, of Leeds, an engineer who was in the service of the Great Northern Railway Co.

He was educated at the Leeds Grammar School, with the intention of his being trained as an engineer, and when quite young he was apprenticed to Messrs. E. B. Wilson and Co., Railway Foundry, Leeds. While there he was a pupil of the late Mr. James Fenton, who was a partner in the firm, and he assisted in the design of the celebrated "Jenny Lind" type of engine, of which so many were built by Messrs. Wilson and Co., and he was also engaged on the equally well-known "Bloomer" type introduced on the Southern Division of the London and North Western Railway by Mr. McConnell.

He next became locomotive engineer of the Great Eastern Railway at Stratford, a post he occupied until 1873, when he was appointed head of the locomotive works of the Midland Railway at Derby, on the death of Mr. Matthew Kirtley. This office he held for over thirty years, retiring at the end of 1903.

While with the Midland Railway Co. Mr. Johnson initiated many important changes in the design and construction of locomotives. His four-wheel coupled express bogie engine "Beatrice" took the Gold Medal at the Saltaire Exhibition in 1877, and his single-driving wheel express passenger engine, No. 1853, with bogie in front, won the Grand Prix at the Paris Exhibition of 1889.

A larger class of engine was designed by him after 1900, in which the size of the boiler was increased, and the working pressure raised to 195 lb. per square inch. These locomotives were of the compound type and had three cylinders in place of two. He also designed and constructed some very powerful goods locomotives during the latter years of his office; and he adopted piston-valves on his engines, being a firm believer in them when properly constructed.

Mr. Johnson became a Member of this Institution in 1861, and was elected a Member of Council in 1884. In 1895 he became a Vice-President, and President in 1898. His Presidential Address contained much valuable information relating to locomotives, railway traction, and kindred matters. On the occasion of the Summer Meeting of this Institution in Derby during his Presidency, in 1898, Mr. Johnson was honoured by the generous welcome that was accorded to the Members by the Midland Railway Co.; and a visit to Nottingham was enhanced by the Reception and Garden Party that he gave in the grounds of the ancient Castle.

He resided for many years in Nottingham, but took little part in public life; he was, however, a Justice of the Peace for that city.

His death took place at Nottingham on 14th January 1912, at the age of eighty.

He was a Member of the Institution of Civil Engineers.

SAMUEL WAITE JOHNSON, formerly Chief Mechanical Engineer and Locomotive Superintendent of the Midland Railway, died at his home at Nottingham on the 14th January, 1912, in his 81st year.

Born at Bramley, near Leeds, on the 14th October, 1831, he was educated at the Leeds Grammar School, and gained his early practical experience under the late Mr. James Fenton at the engineering works of Messrs. E. B. Wilson and Company, Leeds.

He subsequently held appointments in the locomotive departments of the Great Northern, the Manchester, Sheffield and Lincolnshire (as it then was), the North British and the Great Eastern Railways.

In 1873 he was appointed Locomotive Superintendent of the Midland Railway, and held this important position for a period of 31 years, retiring at the end of 1903. The locomotives which Mr. Johnson designed were notable for their handsome appearance, economy in fuel consumption, and capacity for hard service, qualities which were retained through all the developments in engine design which took place during his long term of office.

At the date of his retirement, the locomotive department employed over 18,000 men.

Mr. Johnson was a Justice of the Peace for Nottingham, and was decorated by the Khedive for services rendered in connection with the Egyptian Government Railways. He was a member of the Institution of Mechanical Engineers and served the office of President in 1898.

Mr. Johnson was elected a Member of The Institution on the 3rd December, 1867.