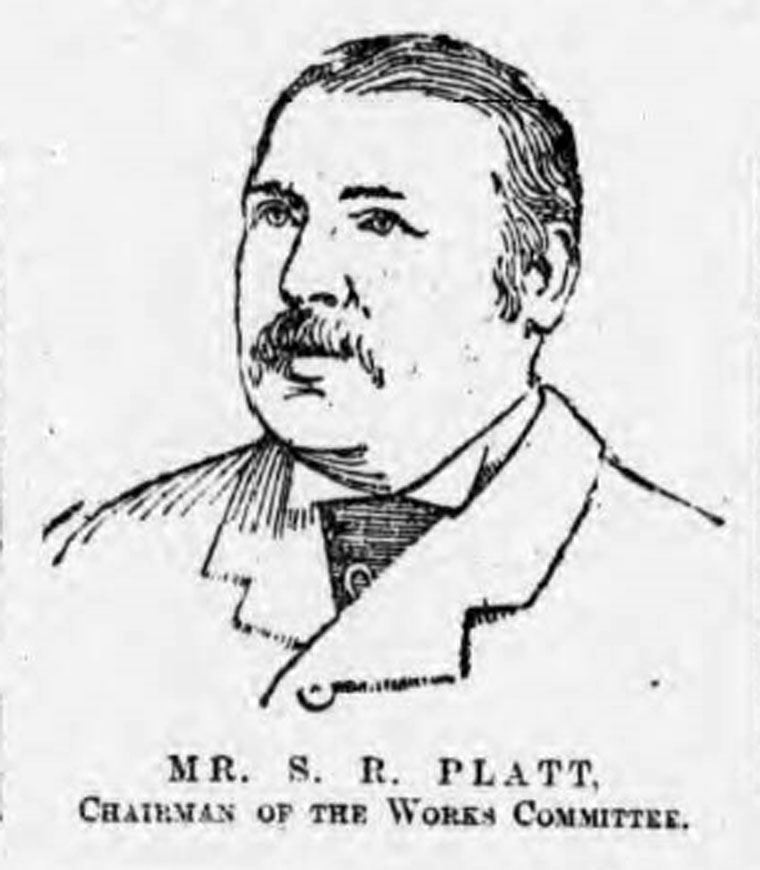 Director of S. R. and J. E. Platt, (Platt Brothers) and Chairman of the Works Committee of the Manchester Ship Canal.

1845 July 1st. Born the second son of John Platt and his wife Alice.

1862 He began work at the age of seventeen, organizing the exhibition of the firm's machinery at the 1862 London Exhibition

He was the only one of the seven brothers with a mechanical bent and passed through every department of the works between 1862 and 1865.

1866 Became a member of the Manchester Royal Exchange

1867 Became a partner in Platt Brothers

1867 Member of the Institution of Mechanical Engineers

1868 Became a director in the company

1873 Member of the Iron and Steel Institute

1885–91 Director of the Manchester Ship Canal and was the first to sail through in his yacht, Norseman. Norseman yachts were designed by St. Clare John Byrne.

1887 He was involved with rescue of the sinking ship Tasmania in the Mediterranean sea.

1890. Laird Brothers built a steam yacht for Mr Platt called the SS Norseman from the designs by Mr. St. Clare Byrne. [1] The Norseman was the first vessel on the Manchester Ship Canal. [2] [3]

1891 He was alderman and magistrate for the borough of Oldham, and a J.P. and D.L. for the county of Lancaster. [4]

When Platt died his yacht was sold to Baron Krupp who promptly died himself.

SAMUEL RADCLIFFE PLATT was born at Oldham on 1st July 1845, being the son of Mr. John Platt, M.P., and grandson of Mr. Henry Platt who had founded, in 1821, along with Mr. Elijah Herbert, the firm now called Platt Brothers and Co.

He received his early education at Cheltenham College, afterwards studying under a tutor in Berlin for six years.

On his return to England he entered his father's works, spending five years in the various shops. On the conversion of the firm into a company, in 1867, be became a director, and, on the death of his father in 1872, was appointed chairman of the company at the age of twenty-seven.

From this time his energy was almost entirely absorbed in the works, and as time went on, his enthusiasm and love for the business increased more and more. He acquired a minute as well as a wide general knowledge of the business of machine making, and also of the textile business in which the firm's productions were used. His knowledge of general engineering was wide and practical, and his experience in coal mining added much to his general usefulness. He had a wide commercial knowledge, not only of this country but of foreign commerce, and his annual Address to the Oldham Chamber of Commerce, of which he was President from its inception to his death, showed how great was his interest in political and commercial economics. He was a staunch Free-trader.

Everything for the benefit of Lancashire found in him a sympathetic and strong supporter, and, altogether, in his native county, he held a unique position. He had travelled considerably. At the age of twenty he spent seven months in India, and in the following year he visited America.

In 1867 he took charge of the exhibit of his firm at the Paris Exhibition; in 1869 he spent several months in Russia, partly on business and partly for pleasure, and visited America in 1870 and again in 1876, crossing the Atlantic in his own steam-yacht.

The record of his life is almost a description of the firm, which has works extending to over 60 acres, and giving employment to nearly 12,000 workpeople. On the occasion of this Institution visiting Hartford Iron Works in 1875,. and in 1894, he gave the Members a most hearty reception.

He became a Member of the Institution in 1867, and was elected a Member of Council in 1900, which position be held to the time of his death. During last Session he contributed a Paper on the "Guarding of Textile Machinery," which, in conjunction with three other Papers on the Guarding of Machinery, gave rise to a considerable discussion. He was one of the prominent supporters of the Manchester Ship Canal project, and was one of the original directors, retaining that position to the last.

In 1873 he was made a county magistrate, and a Justice of the Peace in 1886. He was also high sheriff of the county in 1897, and a deputy lieutenant. In 1882 he was elected a town councillor; three years later he became an alderman, and in 1887 he was raised to the mayoralty, an office which he held for two years in succession.

His health had been indifferent from the beginning of 1901, and later in that year he found himself compelled to give up work.

In July 1902 he went for a cruise in his yacht, the ultimate destination being the Mediterranean, but he did not get farther than the Menai Straits, his condition being too critical for movement; and there, after a painful illness due to an internal abscess, he died on 6th September 1902, at the age of fifty-seven.

SAMUEL RADCLIFFE PLATT died on September 5, 1902, at Bangor, in his fifty-eighth year. He was chairman of the Board of Directors of Messrs. Platt Bros. & Co., Ltd., Hartford Works, Oldham, Lancashire. The company have large textile engineering works, ironworks, and collieries, and the extent of the deceased gentleman's business connections and responsibilities may be gathered from the fact that at their works, which cover over 60 acres, nearly 20,000 people are employed. In addition to the Oldham works the company own extensive collieries at Moston and Shaw. Mr. Platt's early practical commercial training was specially adapted to fit him for a business life. At the age of eighteen, after having been educated at Cheltenham College and on the Continent, he entered his father's works. His object was to obtain a thorough knowledge of engineering, and accordingly he went through the various shops of the establishment which bore his name. He subsequently made a special study of machinery construction in various parts of the world. His first extensive travels were in India, in 1865. During the following year he visited America, and on returning in 1867, he went to the Paris Exhibition, taking charge of the firm's exhibits of machinery. In 1869 he paid a visit to Russia, and in 1870 went a second time to America, Mr. F. Platt, his brother, being his companion on this tour.

In 1875 he cruised to Madeira and the coasts of Africa in a yacht called the Camilla, the predecessor of the Norseman, which he purchased in the following year, when he sailed to America again. Such a high opinion had he won by his industry and knowledge of the business that in 1867, when the firm was turned into a limited liability company, lie was appointed director, and when his father, John Platt, died in 1872, he was elected chairman 'of the Board. He was a generous contributor to and director of the Science and Art Schools, Oldham, and of the Oldham Lyceum. He was made president of the latter institution in 1869, and subsequently elected a life member. Of the Oldham Chamber of Commerce he was chairman for eight years from 1883. He was a strong Churchman, and gave freely to St. Thomas's, Werneth.

In 1882 he was elected councillor for Westwood Ward, became an alderman, and in the Jubilee year, 1887, was elected Mayor of the borough, and re-elected chief magistrate the following year.

In 1892 he withdrew front the Council. He was made a county magistrate in 1873, and a borough magistrate in 1886. In the Manchester Ship Canal he took an active interest, being a member of the original committee which successfully carried the Bill authorising its construction through the most determined Parliamentary opposition of modern times. His yacht, the Norseman, led the procession of vessels which on that memorable New Year's Day in 1894 entered the Canal locks at Eastham and sailed through to Trafford Wharf. In 1897 he occupied the position of High Sheriff of the County Palatine. At the time of the prolonged engineers' strike a few years ago, he took a very firm stand in the fight for the employers. He was a keen follower of sport—especially cricket. He was a vice-president and member of the Lancashire County Club.

In several branches of sport indeed he was closely interested, and, before his health showed signs of seriously breaking down, he rarely missed a cricket match at Old Trafford. He was also a keen yachtsman, and spent a great deal of his leisure on board the Norseman, which he owned. While cruising in the Mediterranean on one occasion he was instrumental in rescuing the crew of a sailing vessel in distress, for which he was publicly thanked. He was an enthusiastic devotee of racing, and kept a number of horses for steeplechasing and other purposes. He was a Knight of Grace of the Order of St. John of Jerusalem and a Knight of the Legion of Honour. He was elected a member of the Iron and Steel Institute in 1873. He was elected member of Council in 1888 and vice-president in 1899. As chairman of the Reception Committee in 1899 he took an active part in organising the highly successful Manchester meeting of the Institute. He also contributed largely to the success of the meetings in Manchester in 1875 and 1887.