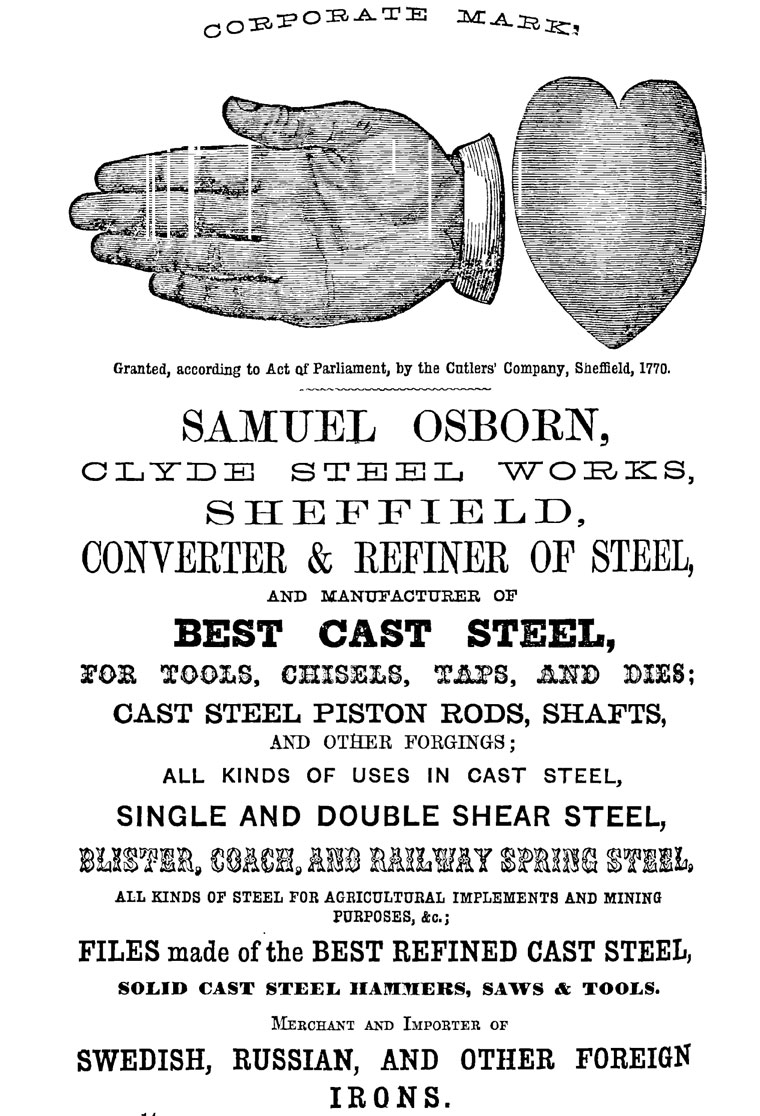 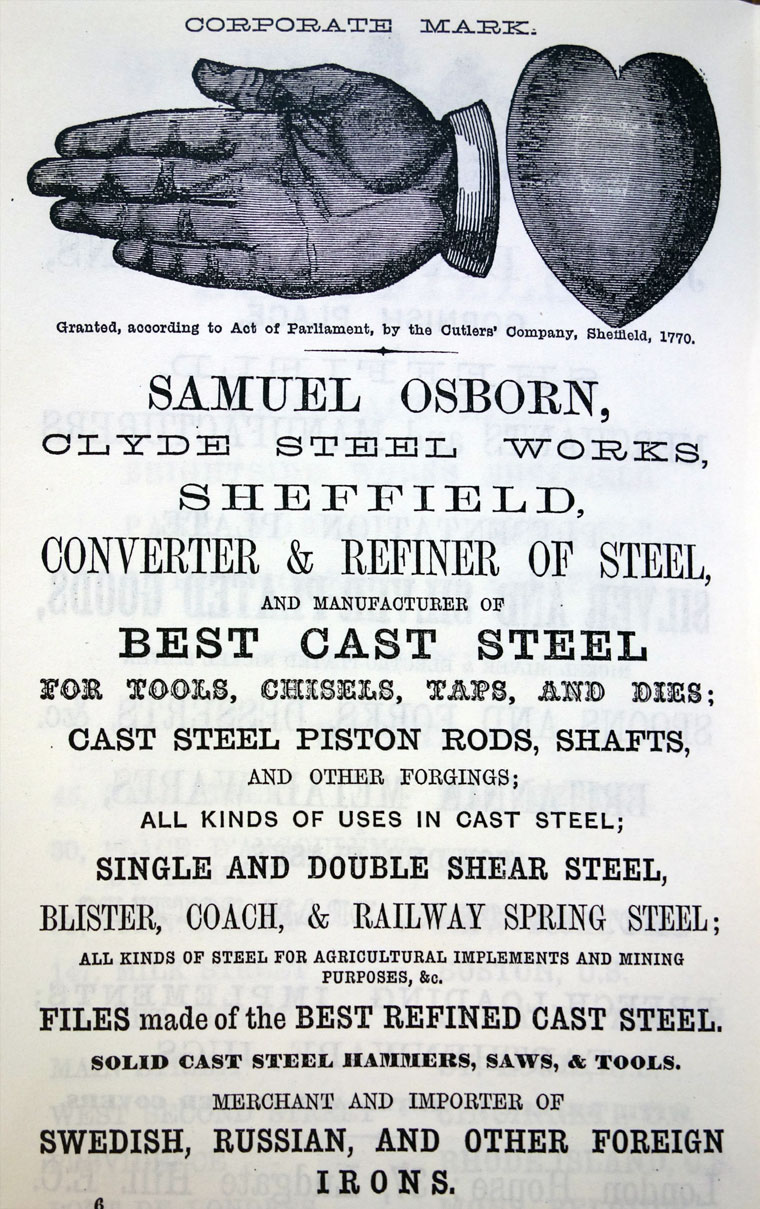 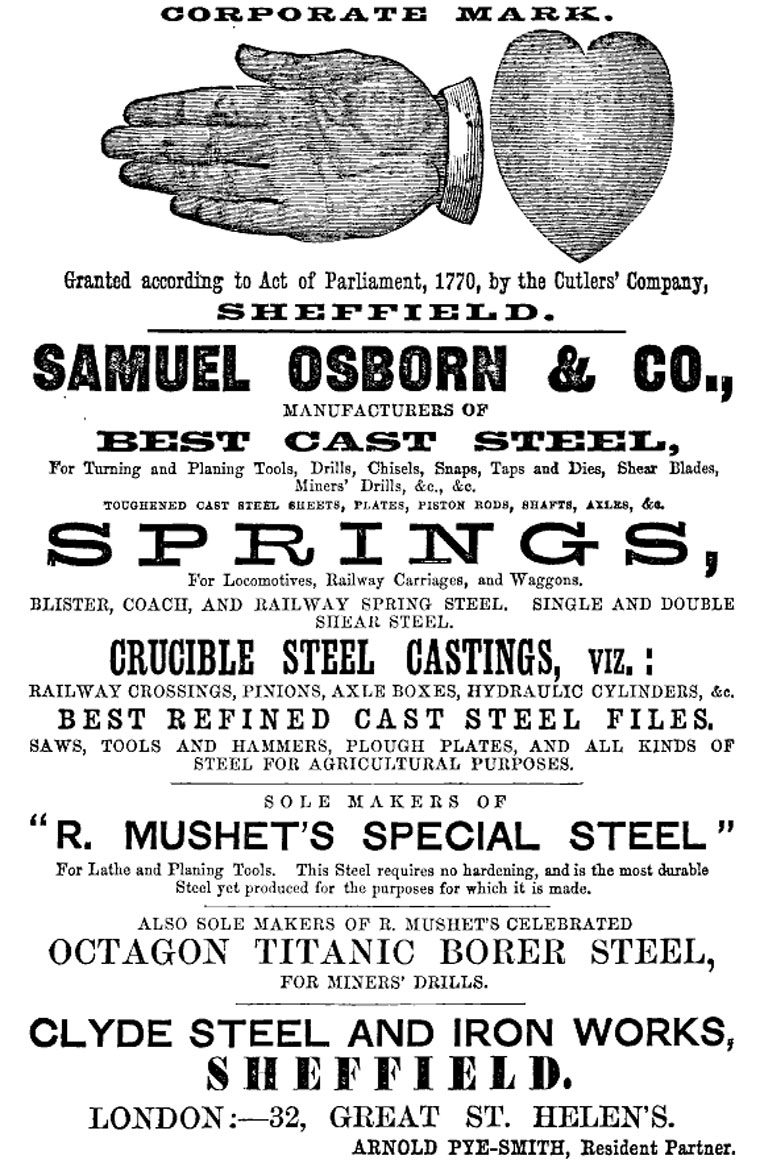 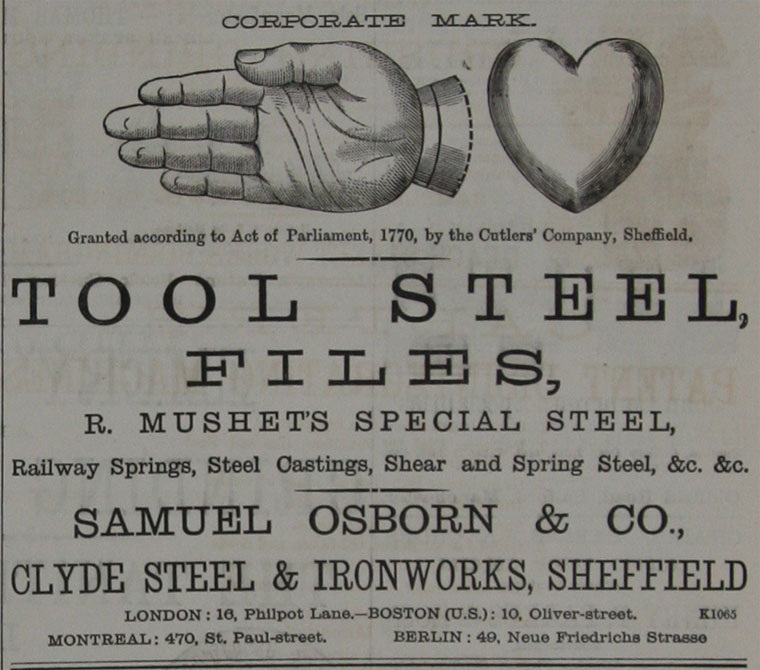 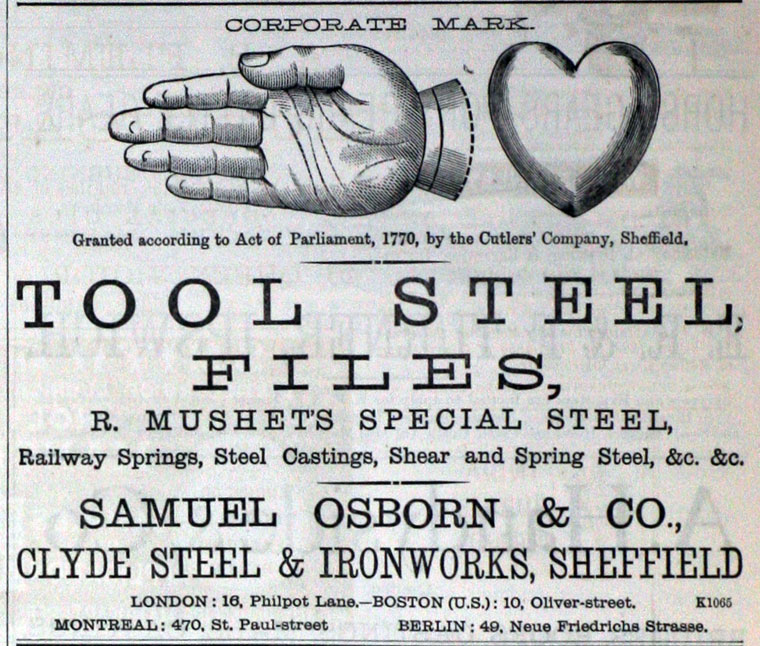 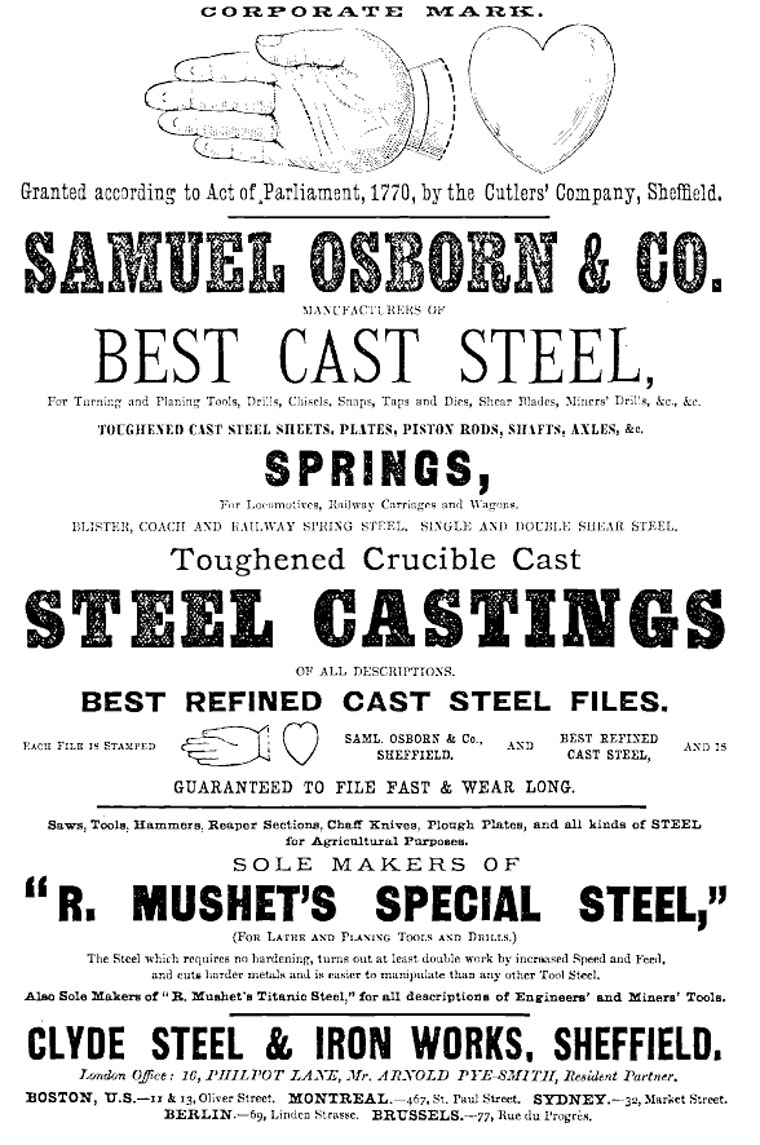 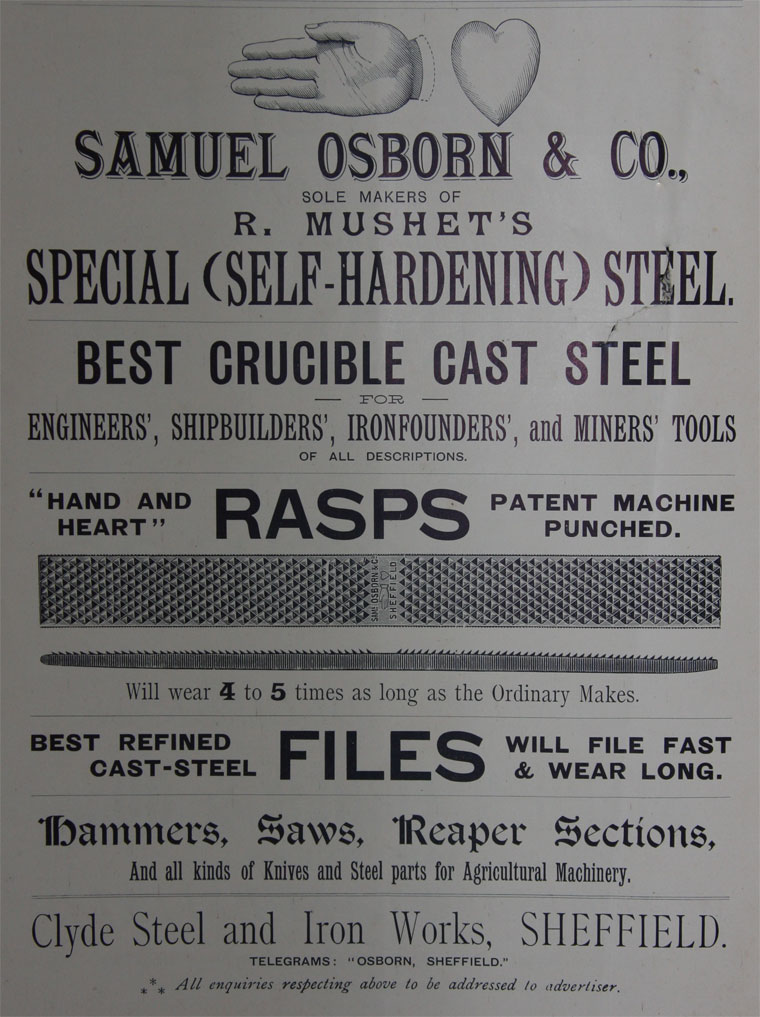 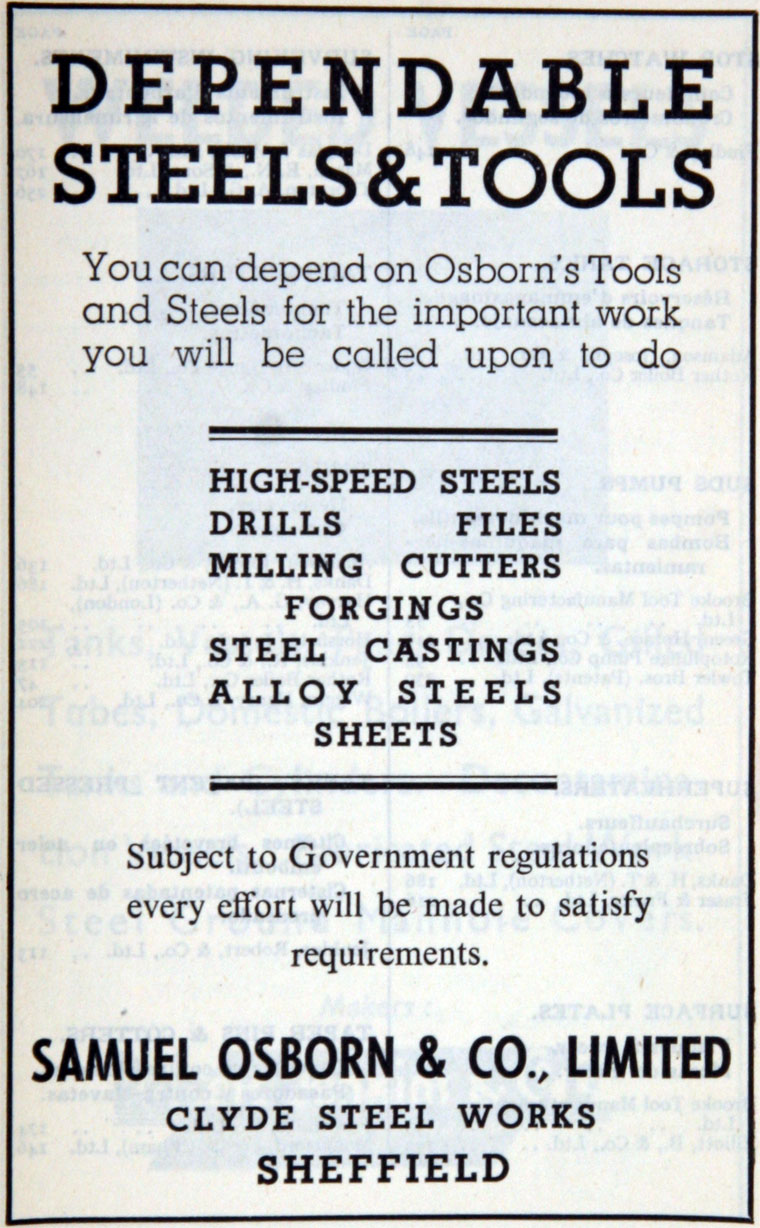 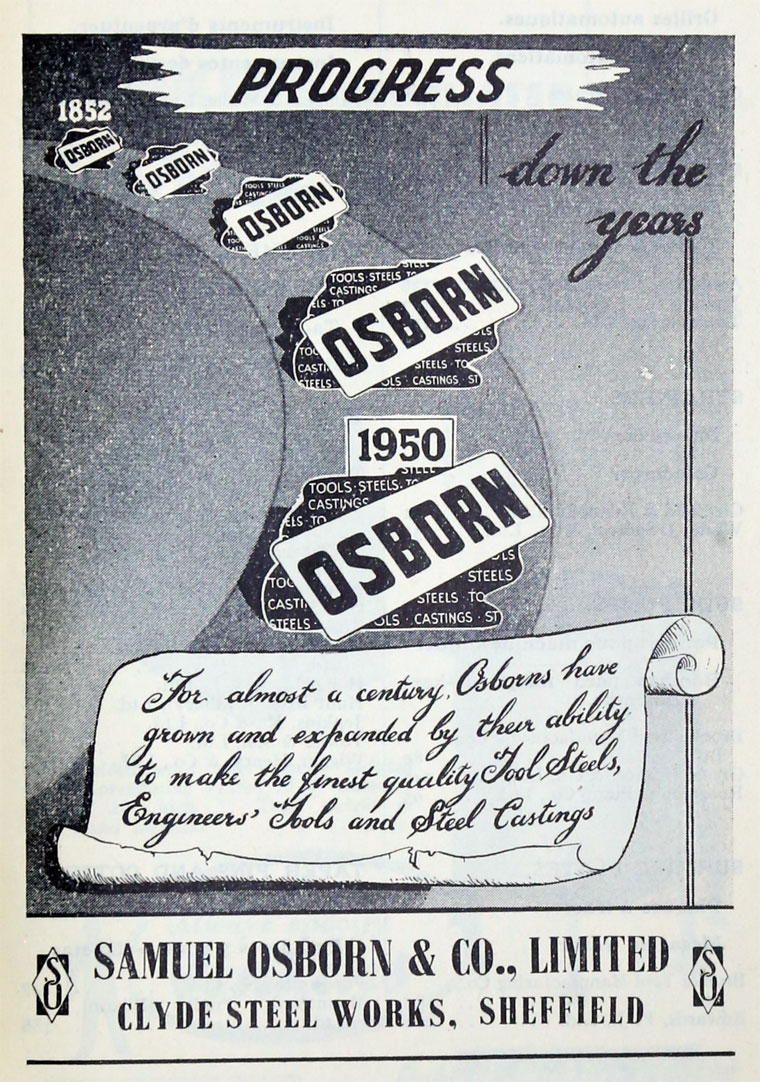 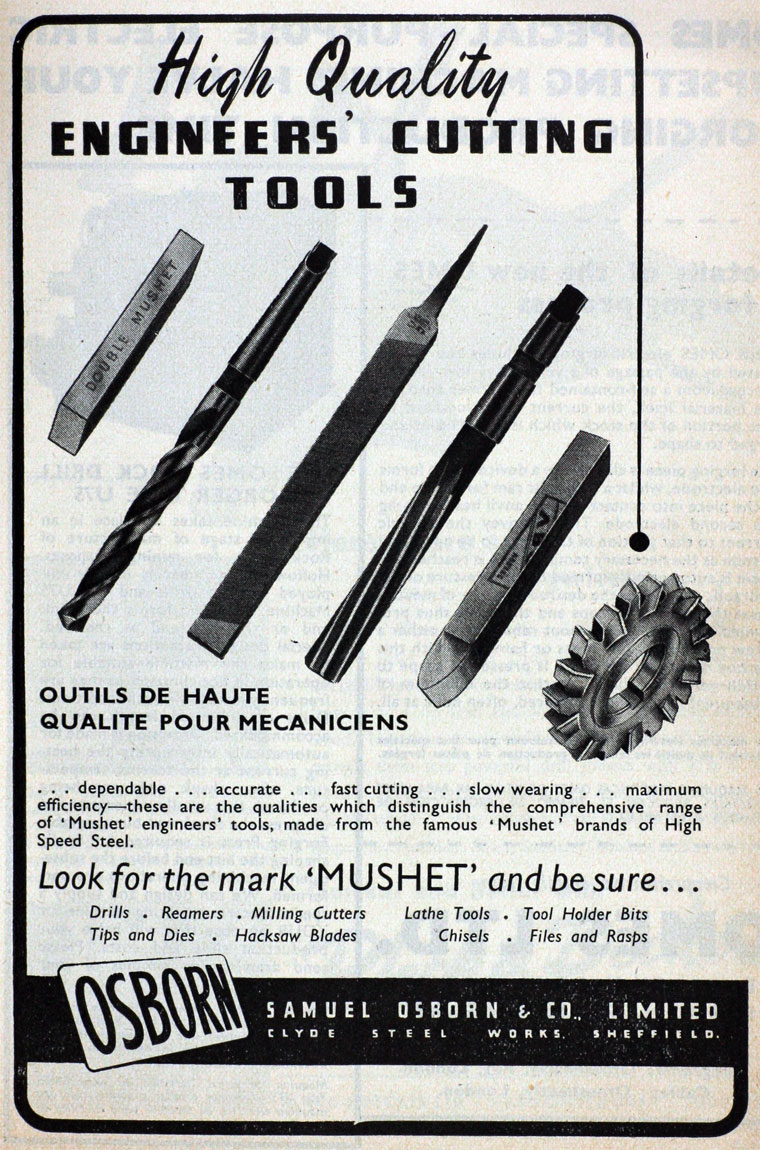 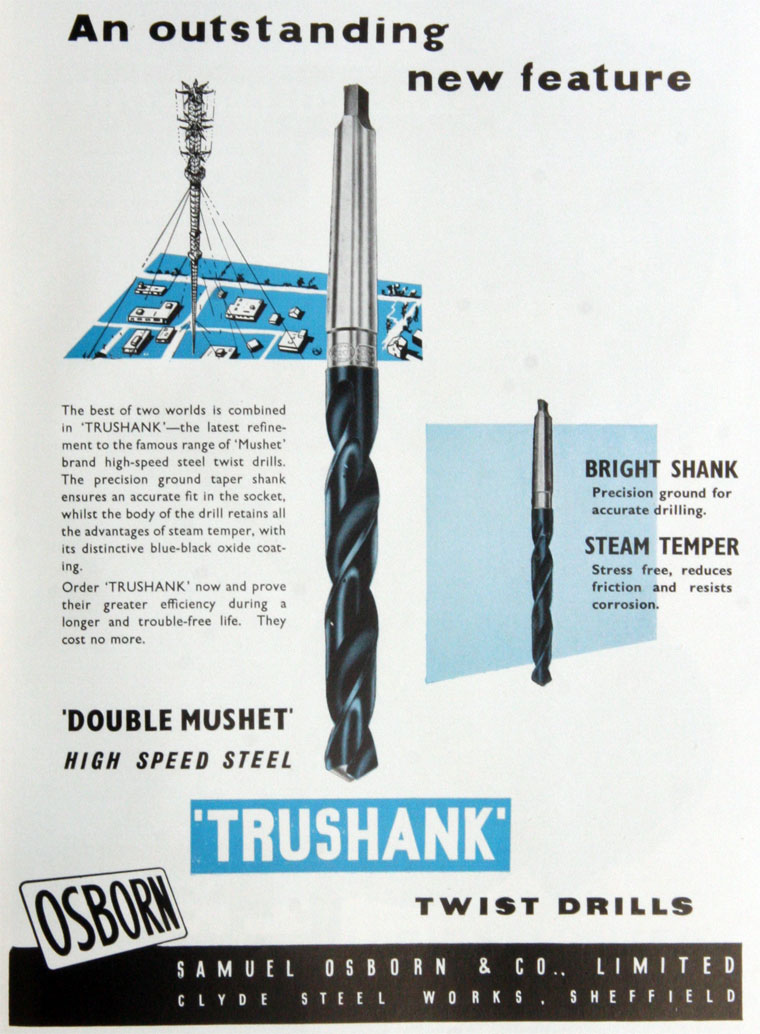 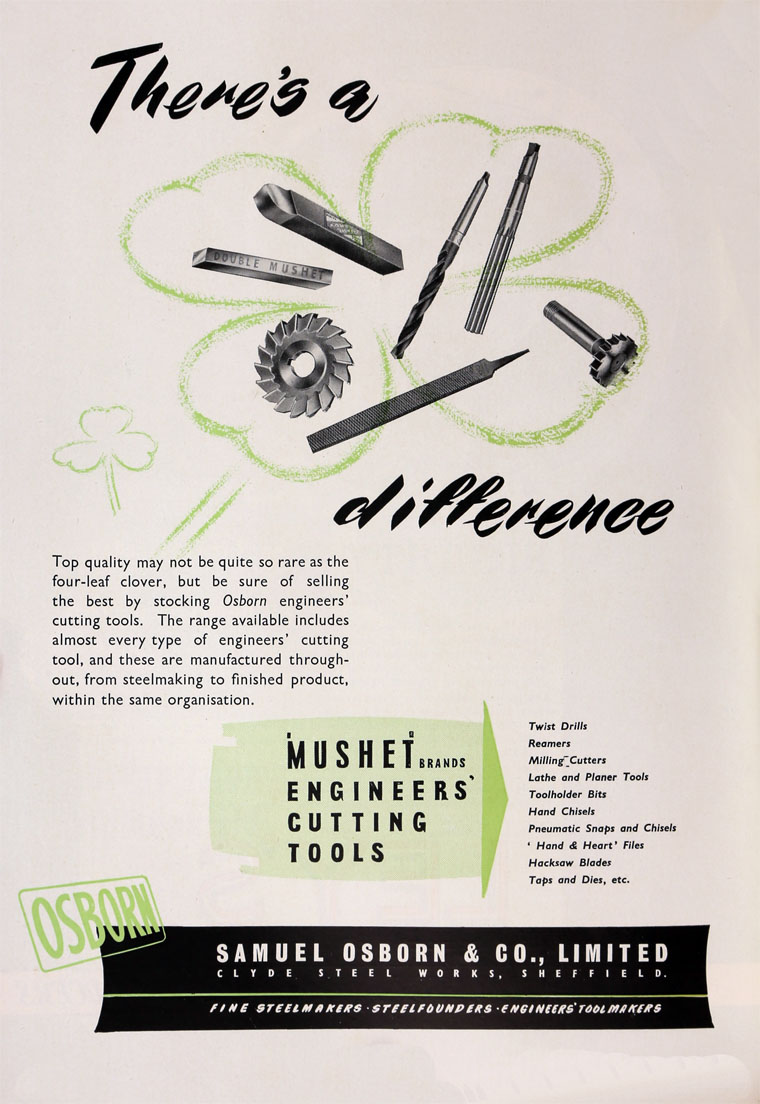 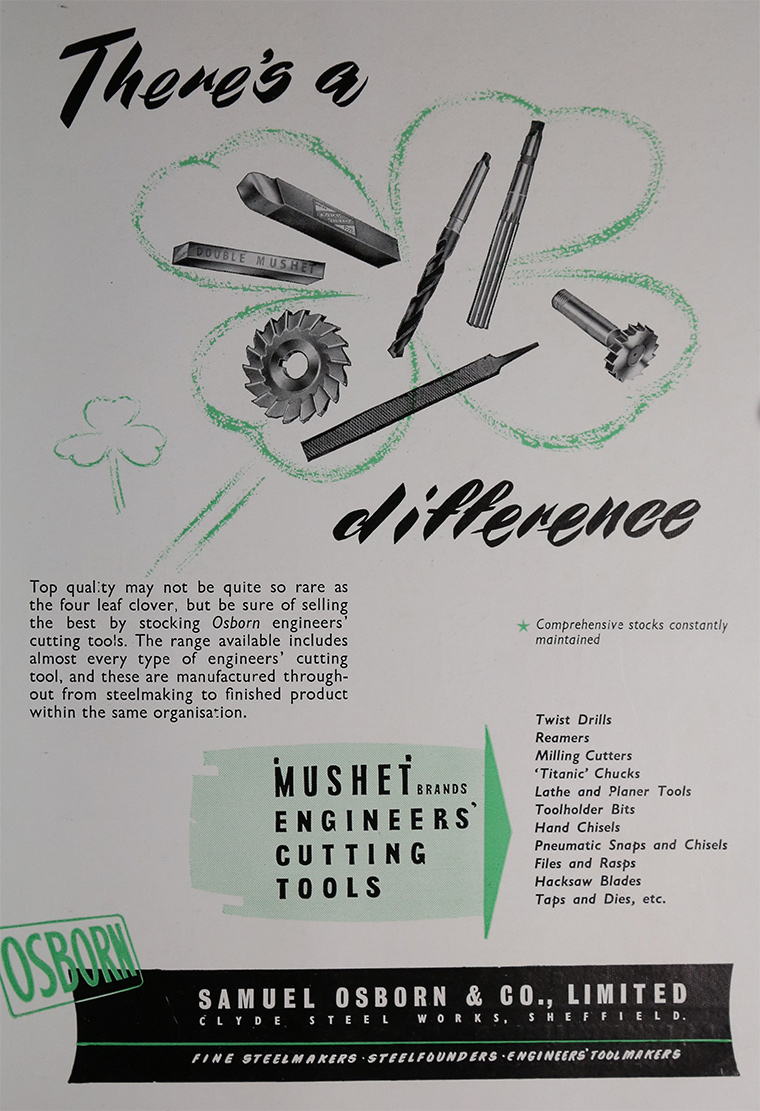 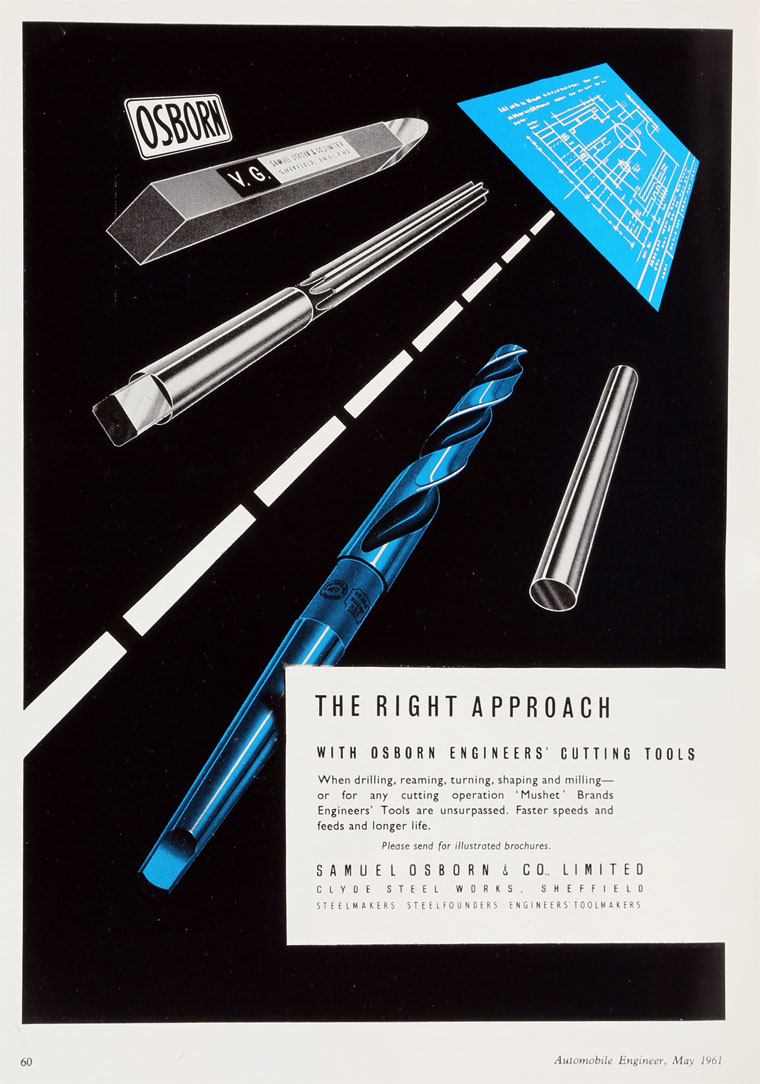 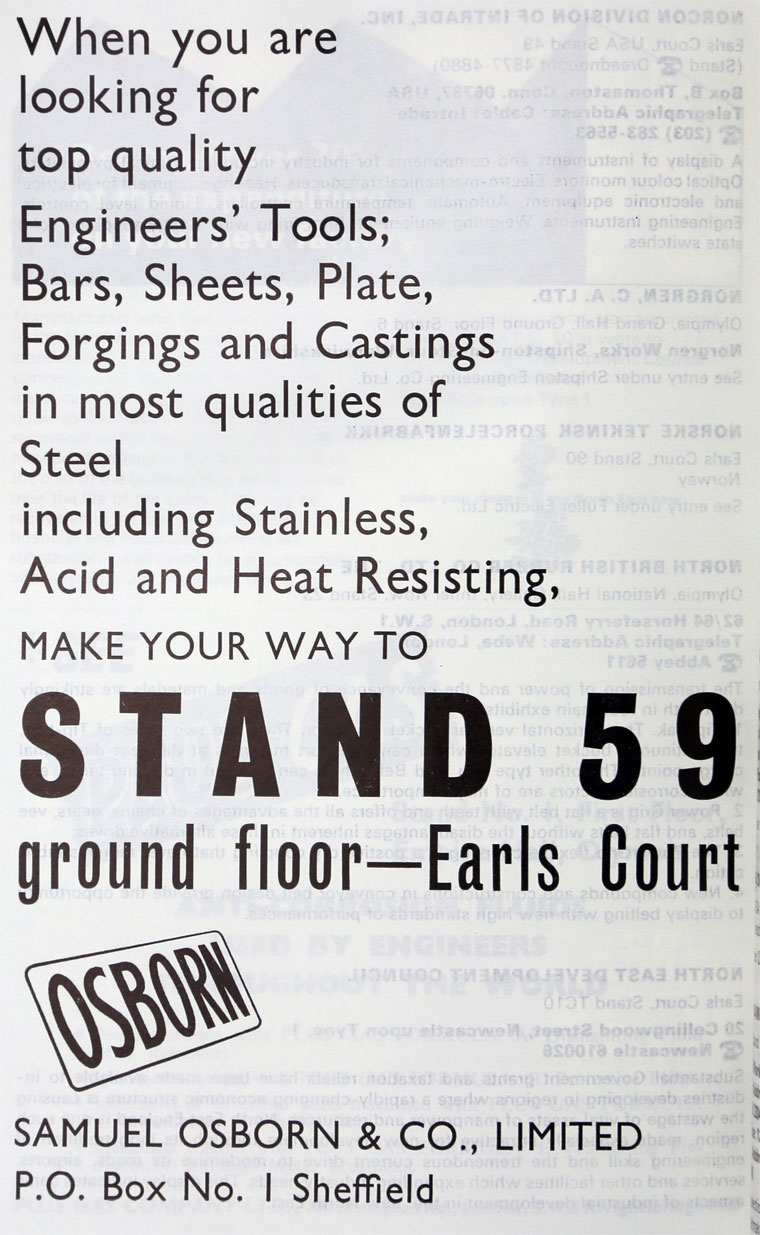 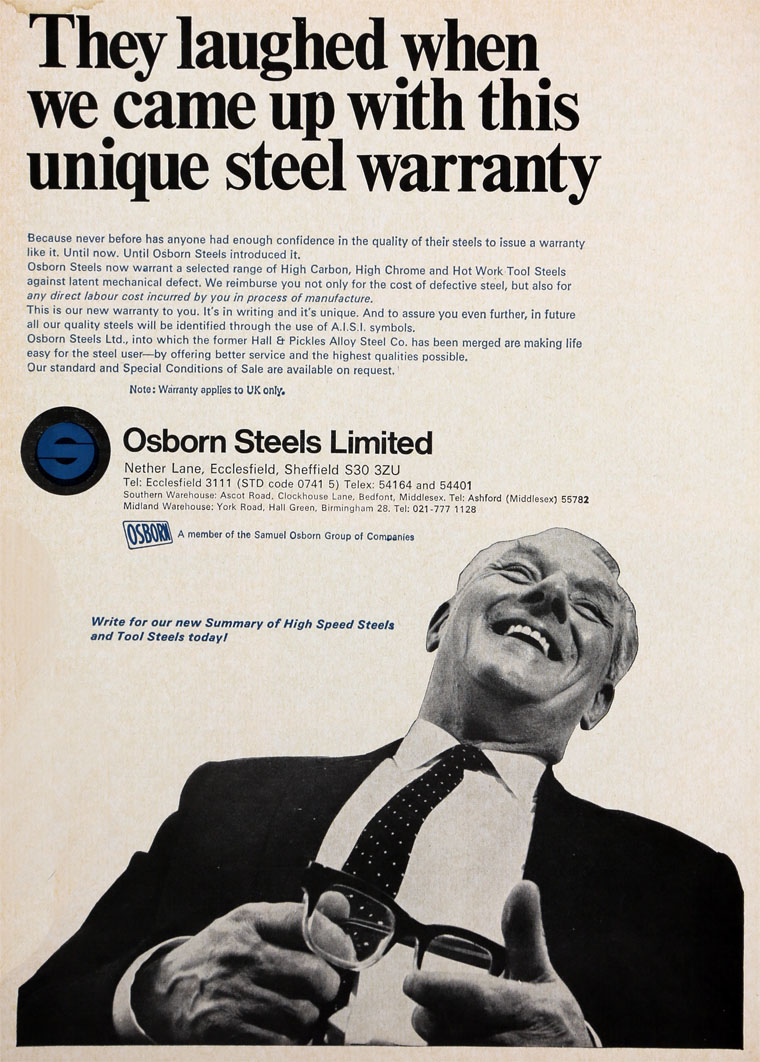 as Samuel Osborn and Co of Clyde Steel and Iron Works, Wicker; 184 Brookhill and Penistone Road, Sheffield; and London.

1869 Acquired additional premises,the Clyde Works in the Wicker, where the business was established as a steel refiner on a large scale.

1960s Like other parts of the Sheffield steel industry, the company was reorganized into separate companies: foundry, steels, engineering, etc.

1967 Merged foundry operations with Hadfields[8] [9] to form Osborn-Hadfield Steel Founders, 59 percent owned by Osborn and 41 percent by Dunford and Elliott[10].

1968 Electroslag refining plant at Eckington supplied by AEI-Birlec of Staffs. [11]

1969 The Osborn-Hadfields steel casting joint company was acquired by Weir Group for merging with their foundries.[13]

1970 The main parts of the business were Osborn Steels, Osborn Mushet Tools and Samuel Osborn Overseas[14]

1927 Article on the firm from The Engineer:

"The founder, the late Mr Samuel Osborn, was born at Eccleshall, just over a hundred years ago. Trying his hand first in the drapery trade and then with a firm of cutlery manufacturers, he turned eventually to steel making, and on April 1st , 1852, opened a small factory, at Brookhill, Sheffield, for the manufacture of files.

By 1856 he was the owner of a six-hole crucible furnace for melting and refining his own steel. Shortly afterwards he expanded his activities and began the manufacture of a wide range of steel articles, including small tools, hammers, agricultural implement knives and bayonets. In 1864 he introduced file-cutting by machinery, a bold step token in face of much opposition and discouragement, but one that was subsequently to be fully justified. In 1867 he took into partnership his brother-in-law, Mr. W. H. Fawcett, and a few years later was joined by Mr. J. E. Fawcett.

By 1868 the company was firmly established at the Clyde Steel Works, where it engaged not only in the converting and refining of steel, but in the manufacture of laminated springs, railway material and steel castings. In 1871 began the association of Mr. R. F. Mushet with the firm, and the development of that gentleman's discovery of the self-hardening property given to tool steel by the addition of tungsten. It took twenty years of hard work to convince engineers of the merits and advantages of the new tool steel.

In 1874 a variety of outside causes brought the firm into difficulties, and led to the filing of a petition in bankruptcy. Many offers of help were received, including one from the firm's workpeople to submit to a reduction of 5 percent in their wages for two years. Other arrangements were, however, made, the business was soon regained, and by 1884 all the creditors had been paid off.

Mr. Osborn died in 1891 in the same year as Mushet. From that date until the present (1927), the firm continued to expand and develop its products, notable events being the introduction of high-speed tool steel in 1900 and of a variety of manganese steel in 1906."[16]