Grace's Guide is the leading source of historical information on industry and manufacturing in Britain. This web publication contains 144,930 pages of information and 230,620 images on early companies, their products and the people who designed and built them. 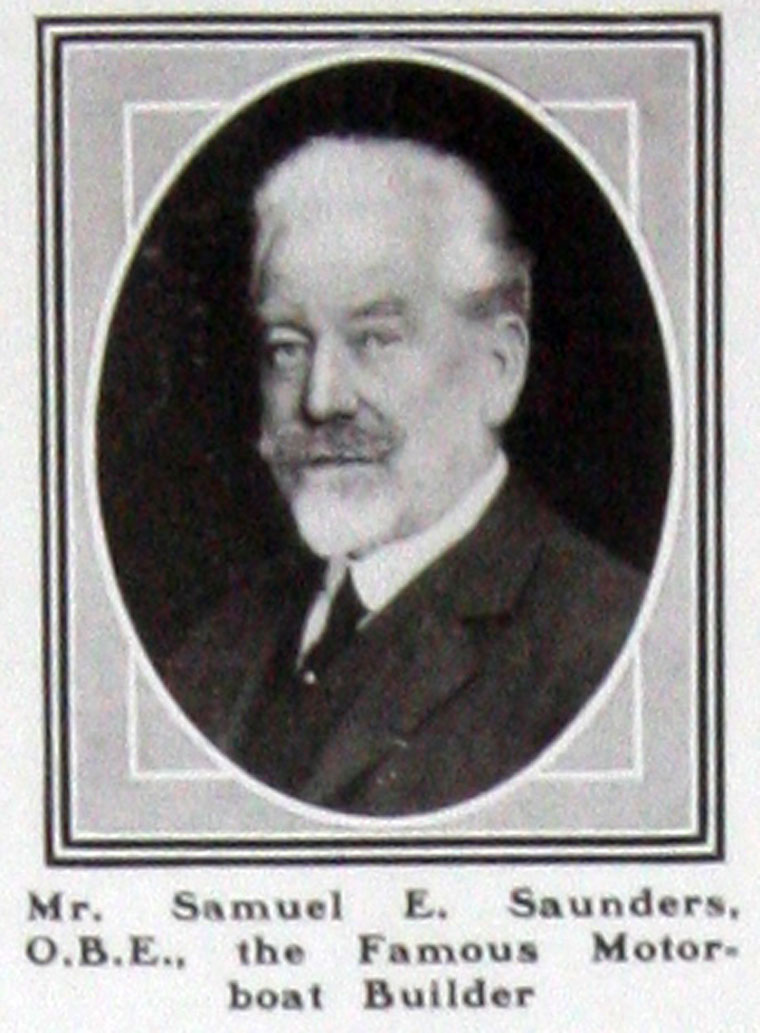 1929 Prospectus for public company Einsteins Electro Chemical Process; S. E. Saunders was one of the directors [8].

BY the death of Mr. Samuel Edward Saunders, which took place in the Isle of Wight on Sunday, December 17th, Great Britain has lost a leading designer and builder of racing motor boats.

Mr. Saunders, who was president of Saunders-Roe, Ltd., and was seventy-seven years of age, began business at Goring-on-Thames. but moved his works to East Cowes in the Isle of Wight, where many noteworthy racing boats were built and lifeboats constructed for the Royal National Lifeboat Institution.

Two of the most famous racers were the "Ursula," a 50ft. boat built for the Duke of Westminster, which for four successive years won nearly every Monte Carlo event; and "Mapleleaf the Fourth," constructed for Sir E. Mackay Edgar, which in 1912 won back the Harmsworth International Trophy from America and successfully defended it in the Solent the following year.

Shortly before the war Mr. Saunders took up the construction of flying boats, and in conjunction with Mr. Tom Sopwith designed and built what was stated to be the first amphibian flying boat. It carried off the Mortimer Singer prize of £500 for seven consecutive landings on land and sea.

Mr. Saunders introduced sewn plywood construction for use in his racing craft and flying boats. He was a member of the Institution of Naval Architects and of the Royal Motor Yacht Club and the Royal London Yacht Club. He held a Royal warrant as motor yacht builder to the King and was a well-known figure during Cowes week.

We regret to record the death of Mr. Samuel Edward Saunders, which occurred in the Isle of Wight on Sunday, December 17, at the age of seventy-seven. He had for many years been concerned with the design and construction of high-speed motor boats, and just before the war took up the building of aircraft with some success.

Mr. Saunders was born at Streatley, and it is recorded that when quite a lad he built a small dinghy entirely by himself, which was hauled through the streets on a track to show of what youthful genius was capable. At a more mature age he set up a boat-building business at Goring-on-Thames, which was afterwards transferred to East Cowes, Isle of Wight, eventually being converted into the firm of Saunders-Roe, Limited, of which he was president at the time of his death. The concern became well known throughout the world for the construction of lifeboats and fast motor boats, among the vessels of this class for which it was responsible being the Ursulas, two 50-ft. boats which were owned by the Duke of Westminster, and the Maple Leaf IV, with which Sir E. Mackay Edgar won the British International Trophy in 1912 and 1913.

A year or two before the war, Mr. Saunders took up aviation construction, and in conjunction with Mr. T. O. M. Sopwith designed and built what is stated to have been the first flying boat in Europe. This won the Mortimer-Singer prize for seven consecutive landings on land and sea, the pilot being the late Mr. Henry Hawker.

This boat was designed from aeronautical, rather than marine experience, a method of procedure which was highly developed during the war with great success. At the same time, it was realised that it was more logical to make a boat, which would fly, rather than an aeroplane, which would float, and by 1918 the flying boat had become an amphibious machine, whose marine and aeronautical functions were given separate consideration. This change of outlook, for which Mr. Saunders was in a great degree responsible, was important because it provided a system which could be progressively expanded in accordance with requirements. As a result, it was possible to design a flexible all-timber hull, which gave an all-round improvement in water performance, and above which a superstructure with satisfactory aerodynamical characteristics could be placed.

Mr. Saunders was appointed an officer of the Order of the British Empire for his war services, and was also a Chevalier de l’Ordre de St. Charles de Monaco. He was elected a member of the Institution of Naval Architects in 1905."