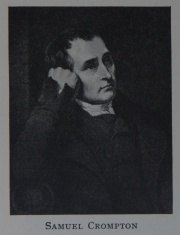 1758 Aged 5. While yet a boy he lost his father, and had to contribute to the family resources by spinning yarn. From an early age he was set to work, spinning yarns by hand

1764 At the age of eleven he rose to the more elevated status of weaver, but continued to spin his own yarn. The defects of the spinning jenny imbued him with the idea of devising something better, and for five or six years the effort absorbed all his spare time and money, including what he earned by playing the violin at the Bolton theatre.

About 1779 aged 26 he succeeded in producing a machine which span yarn suitable for use in the manufacture of muslin, and which was known as the muslin wheel or the Hall-i'-th'-Wood (pronounced Al-i-thwood) wheel (from the name of the house in which he and his family resided), and later as the spinning mule (so called because it combined the rollers of Arkwright's water frame with the moving carriage of Hargreaves's jenny). Crompton combined the spindles of the jenny with the rollers of the frame, transferring the spindles to a mobile carriage and placing the gearing to the side of the machine. The invention was wholly his own since he had no predecessors in the field and was never assailed by rival claimants.

The hybrid machine undertook a five-stage cycle of operations, like the jenny. In essence it combined drafting by rollers and drawbar with the insertion of twist by the revolution of the spindle. The machine proved to be much more versatile than its predecessors because the relationship between the speed of the three working parts—spindles, rollers, and carriage—could be varied and because its intermittent action replicated that of the human hand in spinning. Its motion imposed minimum strain upon the yarn until it had been strengthened by twisting, a procedure which also served to eliminate fibre-mass faults. A cop of yarn was built up on the bare spindle and the tension was carefully controlled during the operation of winding, as on the jenny.

It avoided the labour of rewinding since a weft cop could be skewered directly into a weaver's shuttle. The mule could spin both hard and soft yarns, suitable for either warp or weft, and could spin warps superior in hardness to those of the water frame. Above all it could spin finer counts of yarn than either of its rivals. It was also highly productive since it employed forty-eight spindles, or sixfold the number on Hargreaves's original jenny. Whichever type of yarn it spun, the product remained perfectly uniform throughout. The machine was an immediate success, a remarkable achievement for an invention without any precedent.

1780 aged 27. Samuel Crompton married Mary Pimlott (d. 1796) on 16 February 1780. Of their eight children, five sons and one daughter reached maturity. After his marriage in 1780, a good demand arose for the yarn which he himself made at Hall-i'-th'-Wood, but the prying to which his methods were subjected drove him, in the absence of means to take out a patent, to the choice of destroying his machine or making it public. He adopted the latter alternative on the promise of a number of manufacturers to pay him for the use of the mule, but all he received was about £60. He then resumed spinning on his own account, but with indifferent success.

1789 The first mule mill was built in Manchester by the merchant Peter Drinkwater, with 144 spindle hand-mules and carding engines driven by a Boulton and Watt steam engine. The width of the mill was increased by a half in order to accommodate the new machines.

In 1791 Henry Whitehead of Bury introduced the technique of piecing or rejoining broken strands of yarn while the mule remained in motion, so greatly enhancing the productivity of both workers and machine.

1791 He remained a merchant–manufacturer, operating a hand-loom manufactory in Bolton from 1791 to 1815 and making a range of luxury fabrics for the London market. He was undertaking finishing operations by 1799, and he handled bills of exchange averaging £455 per annum between 1802 and 1807

From 1792 the gearing was shifted from the side to the centre of the mule, in order to drive spindles sited upon both sides of the headstock, by 1796 more than doubling the numbers of spindles carried per mule

1796 Later they were driven by a steam engine at the mill of McConnel and Kennedy in Ancoats, Manchester, in 1796–7.

1800 aged 47. A sum of £500 was raised for his benefit by subscription, and when in 1809 Edmund Cartwright, the inventor of the power loom obtained £10,000 from parliament, he determined also to apply for a grant.

He took into partnership his son William (1786–1834), and Richard Wylde, a fellow-Swedenborgian. He opened a warehouse in Manchester and employed sixty-three domestic weavers in 1810–11. He always preferred independence to employment by others, declining the offer of a post as a mill manager in Scotland in 1805. His native ingenuity became manifest once more in the invention of an improved loom in 1808 and of a domestic wringer in 1812, though he suffered from the piracy of his cloth patterns.

1810 he appealed to Sir Robert Peel for a parliamentary grant and as part of that grant he undertook the first census of the cotton spinning industry. The census listed the numbers of mule, jenny, and throstle spindles operated, by firm and by township. It embraced more than 650 factories in England alone, but it excluded significant sectors such as a large area of Lancashire (Blackburn, Rossendale, and the Calder valley) and the whole of Ireland, as well as the woollen industry and all the water frames operating in the Midlands, North Wales, and Scotland. The census provided a mass of new information, revealing that England alone had 3,875,966 cotton-spinning spindles, of which 3.4 million, or 88 per cent, were mule spindles, and that 70,000 persons were employed in spinning.

1811 aged 58. He made a tour in the manufacturing districts of Lancashire and Scotland to collect evidence showing how extensively his mule was used, and in 1812 parliament allowed him £5,000. With the aid of this money he embarked in business, first as a bleacher and then as a cotton merchant and spinner, but again without success.

Crompton's profound interests and affections lay largely outside and above the mundane world of affairs. By 1791 he had joined the New Jerusalem Church Society, a Swedenborgian church founded in 1787, and in its service he found true fulfilment. He served as treasurer to the church and also, until 1823, as choirmaster.

On 24 September 1862 a statue of Crompton was unveiled in Nelson Square in the presence of more than 10,000 working people and twenty-three brass bands, endowing Bolton with its first public statue.