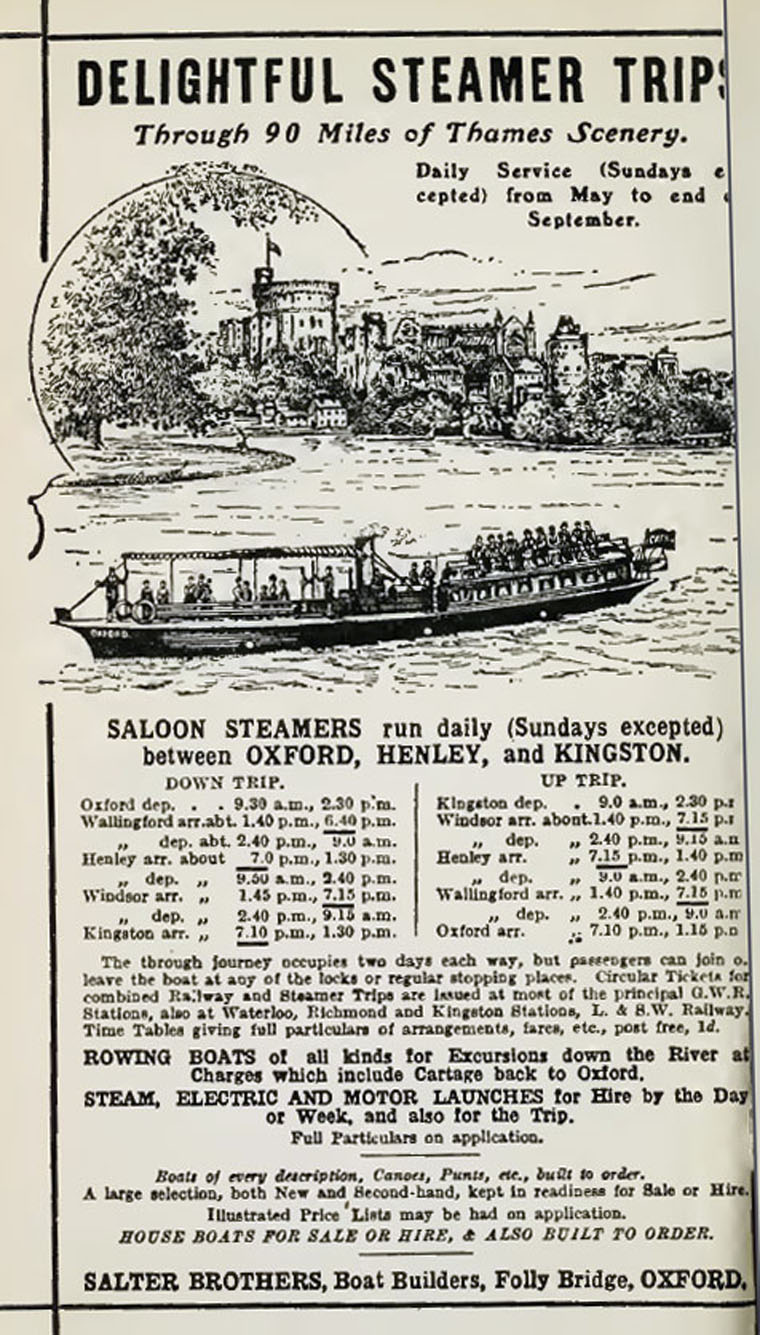 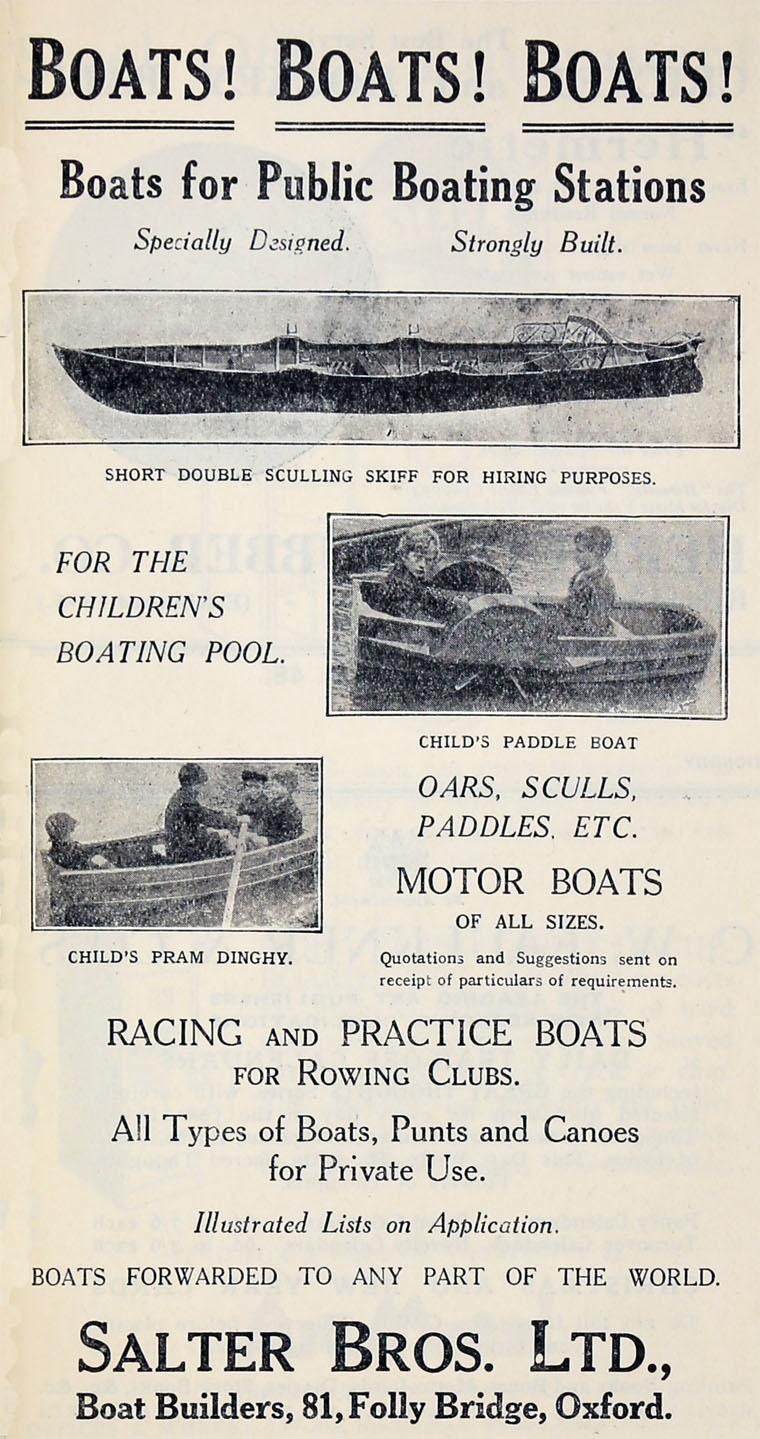 1858 Salter's began when the brothers John and Stephen Salter took over Isaac King's boat building firm based at Folly Bridge (the brothers originally hailed from Wandsworth).

The fledgling firm of J. and S. Salter built and let boats, largely for the university market, and were quick to flourish - constructing a huge variety of different craft. Most notably they built many of the university barges (which once stood on Christ Church meadows) as well as the racing boats (which were under the direct supervision of Stephen Salter, himself once an international oarsmen). The boats gained a reputation for exceptional craftsmanship and many were exported throughout the British empire.

Stephen retired early' from the firm and, following the death of John Salter, the firm passed into the hands of three of John Salter's sons (John, James and George).

1879 Salter's' relationship with passenger boats began when the company was one of the agents for the Thames and Isis Steamboat Co. It is thought that these services operated out of Oxford to Kingston on board the steam launches Isis (built 1875) and Thames (1878).

1882 Those launches are believed to have been bought by Salter's.

c1900 The fleet was subsequently expanded, and by the turn of the century Salter's were building their own steel-hulled boats (the first of these was Reading built in 1901).

The design of the craft remained largely unchanged although the sizes gradually increased to accommodate greater numbers of passengers.

As the family rose in prominence, a number of the family members entered municipal affairs. They were non-conformist Wesleyan Methodists and according to their strict sabbatarian principles, boats were neither let nor operated on a Sunday and alcohol was not served on board.

As Sundays became an increasingly popular day of leisure, and with other companies operating, pressure from the younger members of the family finally forced the company to start operating on Sundays (and later still alcohol was served on board).

The fleet of Salter's Steamers continued to be enlarged throughout the first 50 years of the passenger services (eventually to peak in the 1950s). The company continued to build huge numbers of craft. The publication Salter's Guide to the Thames had become a household name and was established as one of the most authoritative accounts of the sights and sounds of the Royal River Thames.

The company was also on the war office lists, and commissioned to build many boats for the Admiralty in both of the World Wars. Many different vessels were constructed including Gun-ships, mine-layers and landing-craft, while the passenger vessels "Mapledurham" and "Cliveden" were taken over by the admiralty (in the Second World War) and used as hospital ships in London during the blitz.

The third generation of family members were the first to be educated privately (previously family members were expected to work for the firm on an artisan's wage in order to learn the trade). Lord Arthur Salter was the most prominent member of this generation representing Oxford University as an MP, working in the league of nations and being one of the leading experts in shipping during the war.

1945 The fleet was also enlarged when they acquired other firms such as Cawstons of Reading.

1950 As coal prices continued to rise, a project of conversion began with the coal-fired steam engines being changed to diesel, which was more efficient.

1960s The fleet size peaked when the Oxford to Kingston service was at its height and the steamers became synonymous with much of the Upper-Thames.

The "Hampton Court" was the first to have a Dorman engine fitted and by 1965 steam had become part of the company's history.

1956 The company acquired its last traditionally-styled vessel with the purchase of the Dutch trawler "Kagerplas" - which was renamed "Mary Stuart."

With increased traffic on the river and the growth of the car industry, the Oxford to Kingston service was discontinued in favour of shorter more-frequent trips along the most popular stretches. With the changing trends on the waterways, the company built a large number of narrowboats (eventually opening a subsidiary company Friston Narrowboats) and cabin cruisers.

Salter's remain a major influence on the Thames as both a popular passenger boat operator and a respected boat building business.