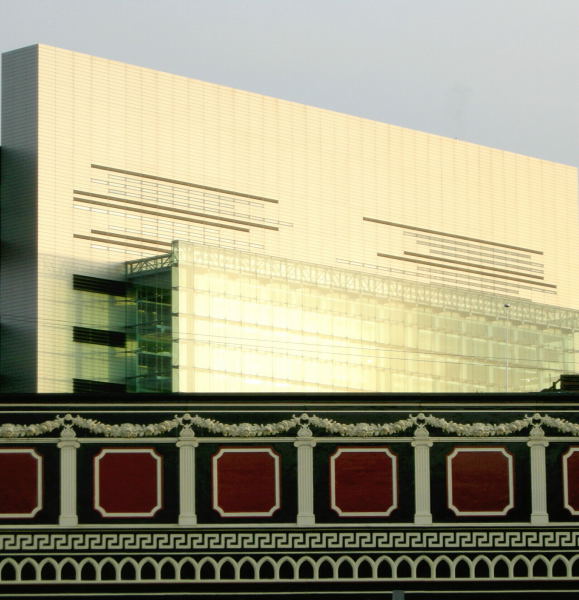 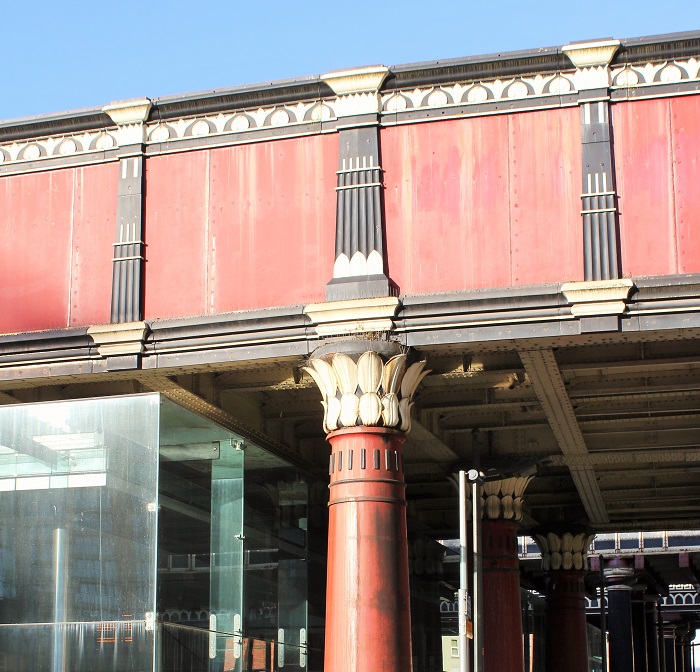 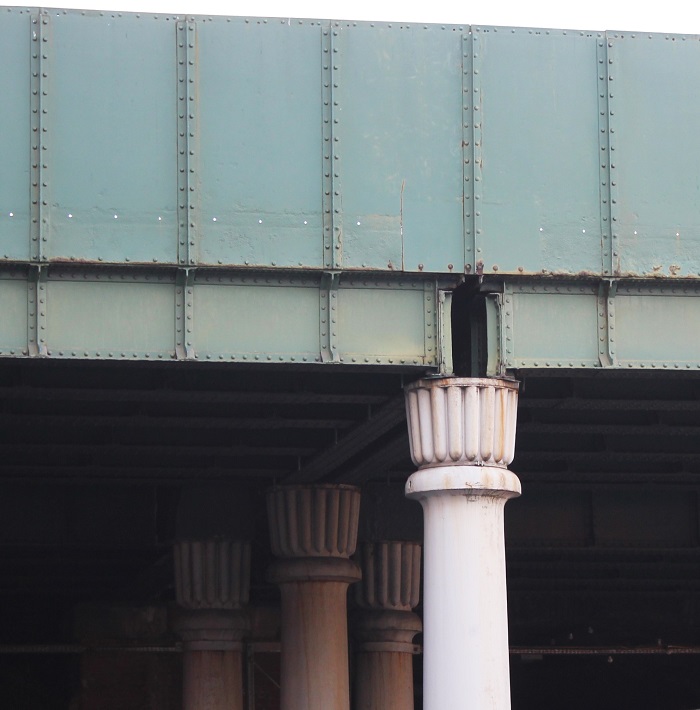 Viaduct which originally led to the L&MR at Ordsall Lane 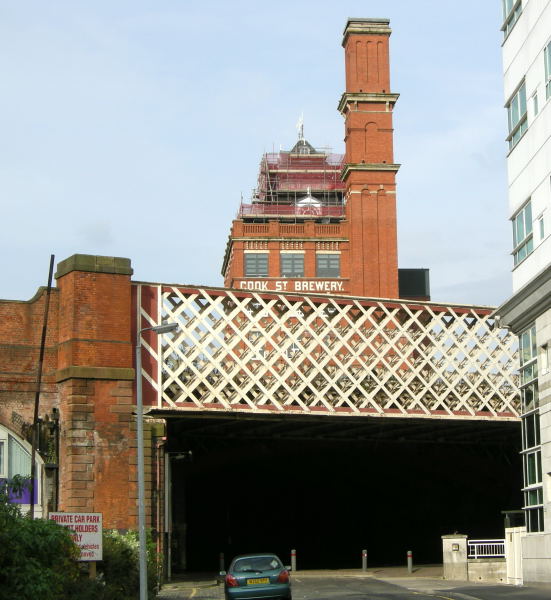 This entry refers to a cluster of railway bridges immediately adjacent to Salford Central Station, and a short distance to the east and west of the station.

The station opened in 1838 as a terminus on the Manchester and Bolton Railway, and was originally named Salford railway station. The lines extended no further east than New Bailey Street.

In 1843 the lines were extended eastwards a short distance to Manchester Victoria Railway Station, crossing New Bailey Street. Between 1858 and 1865 the station was named Salford (New Bailey Street) to avoid confusion with Salford (Oldfield Rd), after which it reverted to its original name of Salford. In 1988, to avoid confusion with the newly built Salford Crescent station, it was renamed Salford Central.[1].

For many decades the station entrance had a grim and uninviting appearance, shrouded by three closely-pitched grimy iron and/or steel girder bridges. In recent years the situation has been transformed from appalling to appealing, with the station entrance being improved by a glass frontage, and the bridges having been refurbished and painted, bringing out the beauty of the ornamented cast iron facades.

The first of the three bridges to be built above the present station entrance was at the south side of the group. The present bridge at this postion is of riveted girder construction with a cast iron facade, presumably a repalcement for the original. Part of the bridge can just be seen in the background of photo 3. A good photo is available here. The first bridge is shown on the 1848 O.S. map as carrying a pair of L&NWR tracks eastwards to Manchester Victoria Station and westwards to join the lines which originally terminated at the Liverpool and Manchester Railway at Water Street. These tracks, to the west of Salford Station, ran parallel to the former Manchester and Bolton line for a short distance, before heading south west on a viaduct to join the former Liverpool and Manchester line at Ordsall Lane. This connection constituted part of the Manchester, South Junction and Altrincham Railway. A remarkable feature, for the time, was that the viaduct running west from New Bailey Street to Irwell Street, a distance of 225 yards, was constructed of iron girders supported by cast iron columns of pseudo-Egyptian style along Upper Booth Street. It is not recorded whether the inmates of the New Bailey Prison were impressed (the prison's northern wall was separated from the viaduct only by Upper Booth Street). There were 45 iron columns supporting the ends of the girders on the southern side, while the northern girders availed themselves of the older Manchester & Bolton railway viaduct for support. The engineer responsible for the structural and architectural design was John Hawkshaw.

A contemporary newspaper report recorded that 'These girders are to be tied together by cross beams similarly constructed, and the interstices are to be filled up with masonry, arched, to give increased strength and durability to the mass. The battlement, or screen, at the side of the railway, which will rest on the columns, is formed of a series of iron plates, and is of considerable height, with panels, in relief, having ornamental casts of the Egyptian lizard upon them. The whole is to be painted stone colour, so as to have the appearance of a handsome piece of masonry. ....…The columns, which are after the Egyptian order of architecture, are seven feet six inches in girth, and weigh from four and a half to five tons each, the main girders are six, and the cross girders about three and a half tons each. The height of the colonnade is about seventeen feet from the pavement, so that there will be room enough for waggons and lurries to go underneath, and load or unload at the various carriers’ stores and warehouses established under the Bolton viaduct ….. the entire weight of the ironwork used in the construction is estimated at a thousand and thirty tons. One of the main girders, or iron beams, of which we have spoken before, was tried with a pressure of 175 tons weight at the foundry of Messrs. Richard Ormrod and Co. (the caster of the ironwork, and to whom it is creditable) and did not give way. indeed, we are told that these pieces of iron generally are considered equal to a weight of 200 tons. The columns rest on stone piers, which have been sunk to a depth of sixteen feet and a half below the surface of the street, and rest upon the solid rock, below the sewer. As a means of draining the earthwork on the line, the main girders are each furnished with a gutter, which will empty the water from it down the columns (which are of course hollow) into the sewer under the street. ….
The number of arches in the viaduct from New Bailey-street to Ducie-street, including the bridges over these and intervening streets, is fifty-seven, making a total of eighty-seven along the entire line, exclusive of the Booth-street colonnade.'[2]

The first official train ran in April 1844, hauled by Meteor, conveying the Board of Directors of the Liverpool & Manchester Railway, together with their Principal Engineer, Edward Woods. The Contractor for the civil works was Pauling and Co, the contract having been placed in May 1843. The entire expense of the project, together with half the expense of building Hunt's Bank (Victoria) Station, was borne by the Liverpool & Manchester Railway Co[3]. It was reported in 1843 that between New Bailey Street and Ducie (a distance of just half a mile) there were no less than 57 arches (comprising all the viaduct arches and the various railway bridges over streets).[4]

In 1865 the Manchester and Bolton line which formerly terminated at Salford Station was extended eastwards by the Lancashire and Yorkshire Railway over New Bailey Street.[6]. This is presumably when the present centre bridge of the three was constructed.

The viaduct connecting Salford Station and Manchester Victoria Station was widened by the LNWR in the early 1880s, the changes including the construction of lattice girder bridges of 170 ft span over Chapel Street, a short distance east of Salford Station (Photo 4). The contractor was Holme and King of Liverpool[7]. The lattice girders flanked the original skewed cast iron bridge. At the same time it appears that the 1843 bridge over New Bailey Street was rebuilt.

The 1840s skewed cast iron arches over Chapel Street were demolished in 2017 and replaced by steel beams. See here.[8]