Grace's Guide is the leading source of historical information on industry and manufacturing in Britain. This web publication contains 140,720 pages of information and 227,385 images on early companies, their products and the people who designed and built them. 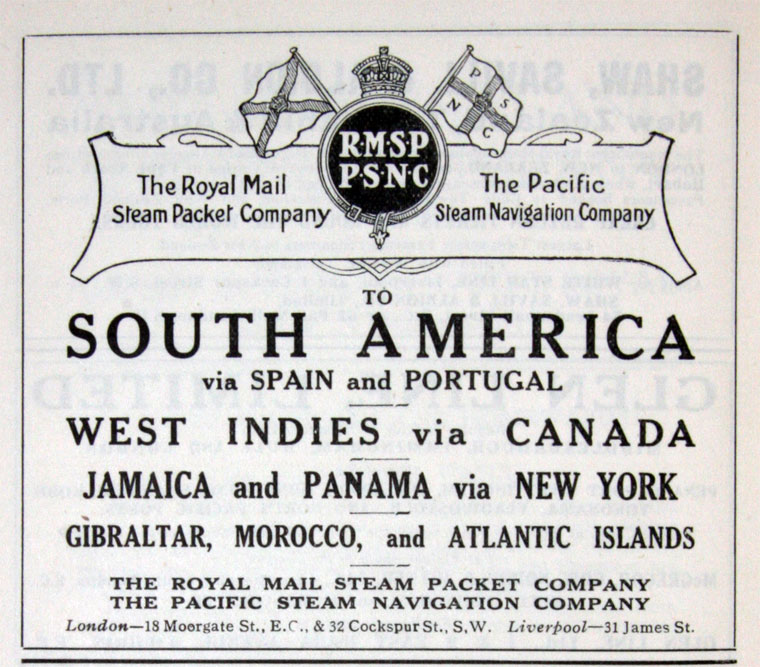 1839 The company was established by royal charter as a result of a campaign by James Macqueen to improve the service to the West Indies.

1840 Admiralty contract awarded to deliver mail to the Caribbean. Placed order with Caird and Co for 4 paddle steamers.

1847 Royal Mail Steam Packet Co acquired SS Great Western; she was used on the West Indies run and later as a troopship in the Crimean War.

By 1850 was operating services to North and South America

1851 A supplementary charter was obtained.

1882 A supplementary charter was obtained.

1884 The peak its fortunes was reached.

1905 the Royal Mail Co's Caribbean contract was not renewed.

1901 Owen Cosby Philipps started to buy shares in the Royal Mail Steam Packet Co, which was in financial difficulties.

By 1903 Royal Mail was in a poor state, reflected in the company’s share price. Philipps and his financier brother John gained control. Philipps became chairman. The company became the basis of what was later known as the Kylsant Group. William J. Pirrie of Harland and Wolff offered to build modern tonnage for the company at cost-price, in return for receiving all repair work and subsequent contracts, beginning a 20 year relationship.

1904 A supplementary charter was obtained. This charter provided that no foreigner shall be qualified to hold office as a director or be employed as one of the principal officers of the company. [1]

1907 The Royal Mail Steam Packet Co bought the David Jenkins and Co business and the Shire Line of Steamers Ltd was formed, with the ships repainted in Royal Mail colours.

1909 Acquired Elder Dempster and Co and restructured it. The company continued to trade under its own name.

1911 Jointly with the Elder Dempster Line purchased the Pacific Steam Navigation Co's share capital, and a large interest in the firm of Lamport and Holt.

1913 Philipps acquired the Nelson Line. The shipping lines retained their separate identities but Philipps and Pirrie began to treat all the associated companies as an integrated Royal Mail Group which was structured through a network of cross-shareholdings. Philipps controlled the empire through his ownership of management shares and his personal shareholdings in the relatively small management companies. Only Philipps understood the entire financial picture.

WWI much of the group's tonnage was requisitioned for service as troopships, hospital ships, colliers, and armed merchant cruisers; about 100 ships were lost.

1927 The Kylsant group became the largest shipping group in the world when it took over the White Star Line.

1930 The company ran into financial trouble, and the British government investigated its affairs.

1931 The chairman, Owen Cosby Philipps, was imprisoned for misrepresenting the state of the company to shareholders. So much of Britain's shipping industry was involved that arrangements were made to guarantee the continuation of ship operations after it was liquidated.

1932 Royal Mail Lines Ltd was created to take over the ships of Royal Mail Steam Packet Co and other companies of the former group.