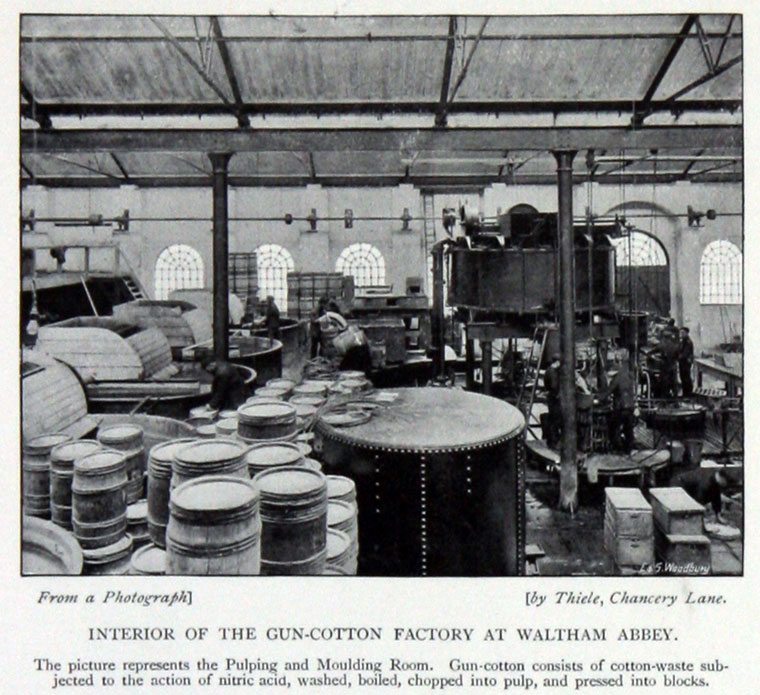 1787 the Crown purchased the Waltham Abbey Mills from John Walton for £10,000; they were renamed the Royal Gunpowder Factory. Under William Congreve, manufacturing of gunpowder moved from what had been a black art into a technology.

1789-1815 Massive increase in production, after which production levels dropped but machinery and process development continued.

1854 Further increase in demand due to the Crimean War, the Indian Mutiny and eventually the conflicts up to the Boer War of 1899-1902.

1865 Under the leadership of Sir Frederick Abel gun-cotton was developed at Waltham Abbey Royal Gunpowder Mills, patented in 1865.

1887 Report by Lord Morley's committee into the Manufacturing Departments of the Army, which consisted of 4 establishments: Woolwich, Waltham Abbey, Enfield and Birmingham; the committee made a number of recommendations for reorganisation, having taken account of modern industrial practices[3].

1889 William Anderson was appointed Director General of Ordnance Factories, responsible for the ordnance factories, laboratory, carriage department and gun factory at Woolwich Arsenal, the small-arms factories at Enfield and Birmingham, and the gunpowder factory at Waltham Abbey.

Chemical engineering improvements at Waltham Abbey were disseminated to private industry so Waltham Abbey became a centre for science and technology but largely unknown for reasons of security.

Post-WWI Development work was conducted on TNT production and on the new explosive RDX. Production was to be gradually transferred to the west of the country, safer from air attack.

1936 The government decided that Woolwich Arsenal and Royal Gunpowder Factory would be relocated to Chorley in Lancashire, Bridgend in South Wales, and Bishopton[4].

WWII An important cordite production unit and for the first two years of the war was the sole producer of RDX. Total transfer to the west was achieved by 1943. Waltham Abbey staff developed the new factories, trained staff and superintended production

1945 Re-opened as a research centre for military propellants and high explosives and expanded into rocket propellants and a range of specialised applications for explosives. Part of the Ministry of Supply, Chemical Research and Development Department.

1962 Royal Armament Research and Development Establishment of Ministry of Defence