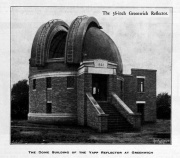 1934. Interior views of the Dome Building Showing the Reflector and its Mounting.

1675 King Charles II founded the Royal Observatory. Its purpose was to find a practical way for mariners to find their position at sea, and hence reduce shipwrecks.

By the 1770s the problem of determining longitude had been solved - either by using a reliable clock, or by using the Moon as a clock, measuring its position in the sky and consulting tables provided by Greenwich Observatory.

As well as measuring time and compiling the navigational tables, the Greenwich astronomers began to do research, studying the stars and other objects in the sky, to find out what they were and how they worked.

1835 George Biddel Airy was appointed the seventh Astronomer Royal, (director of the Royal Greenwich Observatory), a post he would hold for more than 45 years. He reorganized the Greenwich observatory, installed new apparatus and modernized the observatory's system of making exact and precise observations on stellar positioning.

Post-WWII Moved from Greenwich to Herstmonceux to escape the city's smoky air and bright lights. The transfer began in 1947, and by 1958 the Royal Greenwich Observatory was fully up and running at Herstmonceux.

1990 The Royal Greenwich Observatory closed at Herstmonceux and moved to Cambridge, leaving the historic telescopes behind which are now the site of a science centre.