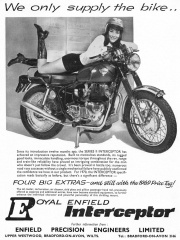 Note: This is a sub-section of Royal Enfield.

The Interceptor was a British motorcycle made by Royal Enfield between 1960 and 1970.

In 1962, the company introduced the 736cc Interceptor which evolved constantly till the end of production in 1970.

In 1960, Royal Enfield introduced the first motorcycle bearing the name Interceptor. It was a highly tuned version of the company's biggest engine, the 692cc vertical twin and was only sold in the USA and Canada. All engines had the engine prefix letters "VAX" and so these are often referred as "VAX Interceptors". They had twin carburettors (except some early bikes), a factory lightened and balanced crankshaft, hot "R" cams, Lucas racing magneto with manual advance and a few other weight saving modifications compared to roadgoing models.

There was also an Interceptor "S" model with scrambler cycle parts, quick detachable(QD) lights etc. that was targeted towards off-road competition market in the US. However, Enfield failed to sell a lot in that trim and many were later converted to road trim, often to customer's requirement, to get sold. 163 bikes were made as per the Redditch factory despatch ledgers held by the Royal Enfield Owners Club in UK.

The very first bikes left the factory in December,1959 and the last ones were despatched in July 1961. The engines in the highly tuned form demanded proper maintenance more than similar 692cc models and many ended with catastrophic damages to the bottom end. Only a handful of these bikes survived which makes them one of rarest post-war Royal Enfield models.

Royal Enfield introduced their all new 736cc twin cylinder engine in 1962 on the 750 Interceptor. Bore x Stroke was 71mm x 93 mm. The new engine was similar to the 692cc engine; but there was hardly any part that was not modified or improved. 750 engines are known for their reliability and torque. The engine cases were beefed up to withstand the increased torque. What sets this engine apart from other contemporary British twins is that the crankshaft was dynamically balanced from the factory which made these bikes one of the smoothest British twin motorcycle engines ever. The Series 1 bikes had a automatic advance magneto, coil ignition, new seat etc. There was a rare single carburettor model as well. It was made until 1966.

The Series 1A Interceptor was introduced in 1967 with two sub models GP7 and TT7. The major change was the introduction of coil ignition, eliminating the magneto. The US models received a new chrome tank, a new seat, instrument mounts, handlebar, mudguards, etc. All S1A interceptors had twin Mark 1 Amal carburetors. The breather system was modified to eliminate most of the oil leak problems that had plagued the Royal Enfield twins since the 1950s.

Royal Enfield made a prototype Series 3 Interceptor to replace the Series 2. The engine capacity was enlarged to 778cc and it was called the 800 Interceptor. However, the company went bankrupt before mass production was realized.