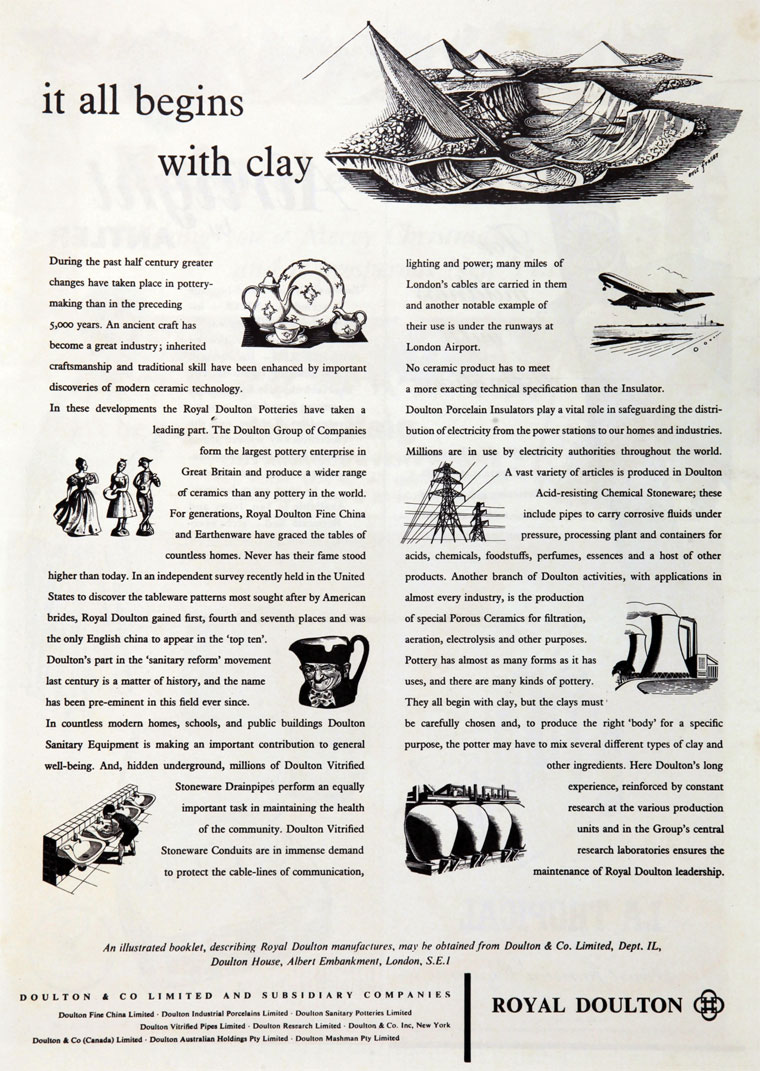 1815 John Doulton went into partnership with Martha Jones and John Watts at a stoneware factory in London.

By 1871, Henry Doulton had launched the Lambeth Studio with local designers and artists who experimented with a variety of materials and glazes in an industrial setting. Their names included the Barlow family, Frank Butler, Mark Marshall, Eliza Simmance, and George Tinworth. Today their pioneering work commands increasingly high prices.

1877 Henry purchased a major shareholding in the factory of Pinder, Bourne and Co at Nile Street in Burslem, Staffordshire – a facility that handled tableware as well as ornaments and earthenwares.

1901 The Doulton name caught the attention of the royal family itself. During 1901 the Burslem factory was granted the Royal warrant by the new king, Edward VII. Now the business could adopt a bold new logo – adding a crown to the British lion – and a classic brand name – Royal Doulton.

1913 Royal Doulton launched its definitive HN Series of Pretty Lady figurines and these collectables went from strength to strength. Under Charles Noke, it successfully moved into the market for Character Jugs too. What’s more, it had established Bunnykins as nurseryware in 1934, moving into collectable figurines by 1939.

Between the World Wars, the name Royal Doulton became synonymous with the finest English china across the world. Innovation and inspiration were key to its growth, whether that be flambé ware, titanian ware, or bone china.

2005 Those historic names became part of the Waterford Wedgwood group.

Royal Doulton’s largest and most expensive figure takes 160 hours to hand paint and costs more than £14,000. Its collectables have proved so popular that it launched the Royal Doulton International Collectors Club (RDICC) in 1980. Royal Doulton Archives give the business and its designers access to some 10,000 watercolours dating back to 1815. And the Doulton Lambeth pedigree lives on with modern limited edition Lambethwares.

From the twentieth century onwards, the pedigree of the Lambeth and Burslem Studios has been followed through with the work of key individuals. It also has a Design Studio based in Stoke-on-Trent, and a state-of-the-art production facility based in Indonesia. Nevertheless, the family links remain – Michael Doulton is the Honorary President of the RDICC.

Today, Royal Doulton is at the forefront of retail and e-tail with a lifestyle offer that covers the classic and the contemporary, tableware and collectables, oven to tableware, and personal style.